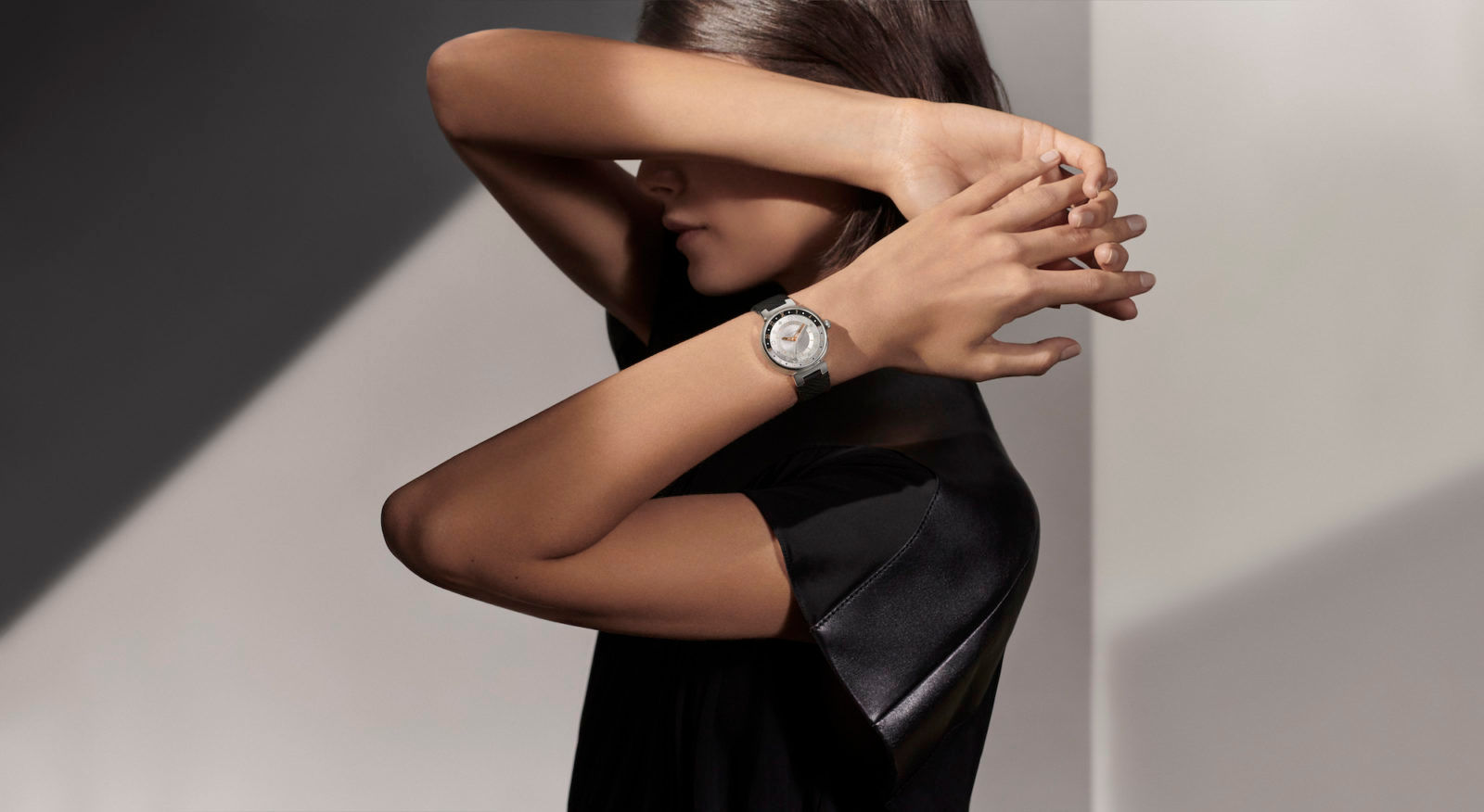 Style
Louis Vuitton Tambour: How the maison’s most emblematic watch has evolved in the last 18 years
Share
Next article

With its heritage in luxury leather goods and accessories already rooted deeply and loved around the world, Louis Vuitton then made a stunning debut in the world of horology in 2002 with the Tambour watch design, which would become the most emblematic creation in its watchmaking universe.

French for “drum”, the Tambour featured a new and unique signature case design. Sculpted from a metal block, it was round, generous and sturdy. Meant to be a statement of fine watchmaking infused with the maison’s style codes, its caseback was adorned with the original Monogram pattern and slightly larger than the bezel. Engraved on the generous lip of the case were the 12 letters that make up the name of the brand, marking each hour.

That first collection in 2002 was inspired by the Monogram canvas synonymous with the house. The lustrous brown dials were brought to life with mustard yellow hands – a nod to the unmistakable waxed thread used on the maison’s leather goods. Gently curved case flanks replaced a traditional bezel, while its fluid lines were accentuated by distinctive applied lugs.

Boasting inner workings worthy of traditional Swiss watchmaking savoir faire and always tied to the house’s heritage of adventure, travel and fine craftsmanship, the watch has since been seen in various iterations. Some of the diverse complications include the first Tambour chronograph launched in 2002 with a COSC-certified automatic movement, a “Worldtime” model that simultaneously displayed time in all 24 time zones and the first Louis Vuitton movement equipped with a tourbillon escapement.

The maison made significant breakthroughs in watch technology, specifically with the Tambour Spin Time in 2009. Patented by the house and an industry first, the modernised version of a jumping-hour watch told time with rotating cubes that spun around independently and instantly in place, instead of a central hand. An enduring edition within the Tambour collection, the Spin Time has been given a myriad of makeovers over the years.

In 2011, the house stepped up its haute horology game with the technically advanced and ultra high-end Tambour Minute Repeater GMT. It was Louis Vuitton’s first minute repeater watch that chimed the wearer’s home time, while it displayed the local time abroad. Featuring a manually wound movement developed in-house, the timepiece catered to the world traveller with an affinity for grand complications.

The maison’s ties to the nautical world also led to nifty Tambour creations such as the Diving watch that allows its wearer to time his dives and the LV Cup, which includes a countdown feature corresponding to the regatta race starting procedure. For the ladies, the watch was transformed into an exquisite accessory aptly named Tambour Bijou. Showcasing a whittled-down feminine 18mm diameter, it has also taken on the guise of a jewellery-inspired edition called the Tambour Bijou Secret, which features a dial hidden behind a decorative cover in the form of a round monogram flower.

The Tambour Slim was revealed in 2013. It featured a pared-down and inverted drum shape, with a bezel that was slightly larger than the caseback, instead of the opposite. Its precious mother-of-pearl guilloché dials were meticulously crafted and adorned with diamond indexes. Also offered were variants with a tourbillon – the second developed in Louis Vuitton’s history – created at the La Fabrique du Temps, a complications specialist acquired by the house in 2012.

A striking aesthetical departure from the classic model, the Tambour eVolution took on a bold masculine style in a 45mm case with a high- tech silhouette. Combining modern sensibilities with elegance and only offered with a metal strap, its less rounded, edgy lines were designed to meet the needs of the urban globetrotter.

The Tambour Moon saw the maison take a daring design leap again in 2017. While the case remained characteristically round, its shape changed completely with the curve of the caseband reversed. Still held by the hallmark lugs, the watch sported a new crescent-shaped profile and concave edge that played with light cleverly. The Tambour Moon has several variations, including a smartwatch edition called the Horizon, and a grand complication, the Mystérieuse Flying Tourbillon, which features mechanics that seemed to be suspended in mid-air. Achieved with the use of deftly superimposed sapphire discs, the optical illusion of a floating movement was another first in watchmaking history.

Launched this year, the Tambour Curve Flying Tourbillon Poinçon de Genève is a testament to how Louis Vuitton endeavours to be a serious contender in the horology world. Its case is crafted from titanium and CarboStratum, a high-tech material composed of over 100 layers of compressed carbon sheets, developed exclusively for the maison. Lightweight and built to last, the futuristic 46mm masterpiece boasts an openworked face designed around a tourbillon and a prominent LV logo in the dial’s centre. Powered by the mechanical LV 108 Calibre – developed and assembled by La Fabrique du Temps Louis Vuitton in Geneva – it bears the prestigious Poinçon de Genève, a certification honouring the highest level of quality and craftsmanship in fine watchmaking.

In less than two decades, the Tambour has risen to the ranks of an icon, thanks to the maison and its elite team of watchmakers’ tireless pursuit of innovative designs and new complications. As watch enthusiasts wait with bated breath for the Tambour’s next reveal, we are certain it will continue to march to the beat of its own drum.