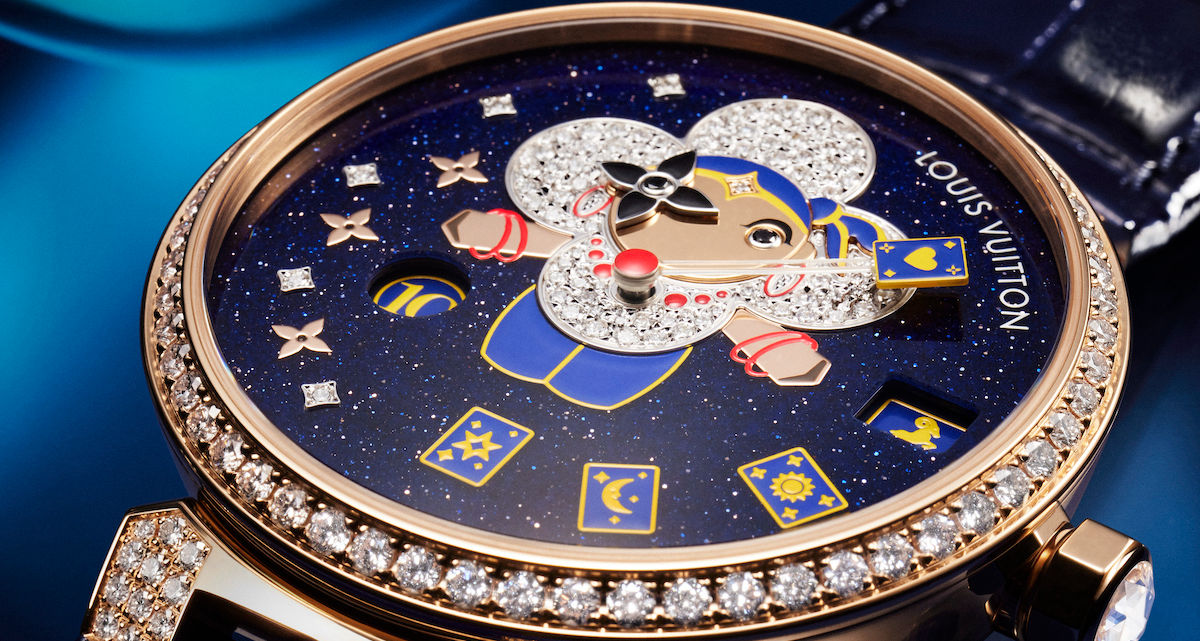 Louis Vuitton’s latest watches feature its playful mascot, Vivienne, and a new model of the Tambour Spin Time that harnesses technology for an enhanced time display.

Louis Vuitton has pursued excellence in watchmaking since 2002 with expertise built on tradition and innovation. As a result, haute horlogerie has emerged as a defining expression of the maison’s craftsmanship and savoir faire.

The house stepped into the challenging new universe of craftsmanship with the creation of its first Tambour timepiece, which married the art of travel with time. Since then, it has been conceptualising and assembling exclusive, technically challenging movements that have led to the creation of unrivalled designs. These include the 400-component Tambour Minute Repeater, the Escale Worldtime that displays all 24 time zones without a single hand, and more.

This year, the maison introduces four new references to the Tambour range. The first is the Tambour Spin Time Air Quantum, which elevates conventional time-telling with cutting-edge technology, while the second is a trio of whimsical iterations of the Tambour Slim Vivienne Jumping Hours. We take a closer look at the novelties here.

Vivienne, the maison’s mischievous and charming mascot who debuted in 2017, has made surprise cameos on various objects: on the house’s monogram canvas, as a miniature pendant and brooch in the Vivienne Travellers collection and on the maison’s watches. She took over all 12 rotating hour modules on the Tambour Spin Time Air Vivienne, while on the Vivienne Bijou Secret, she unveiled the time cheekily in a game of hide-and-seek.

Now, Vivienne transports her fans into the fantastical world of make-believe with three magical interpretations of the jumping-hour display. She takes on a different guise on each Tambour Slim Vivienne Jumping Hours model – as a casino croupier, circus juggler and fortune teller.

With black diamonds for eyes, Vivienne assumes the role of a fortune teller in the pink gold model with diamond-set bezel and lugs. Adding more mystery to her persona is the backdrop of a dark blue aventurine dial, which evokes a dazzling night sky studded with twinkling stars.

Framed by a bezel and lugs set with tsavorites, rubies and brilliant-cut diamonds, the yellow gold version sees Vivienne as a casino croupier with green tsavorite eyes. Featuring a dial of skarn, a mineral rarely seen in watchmaking decorative arts, it recalls the vivid green of a casino table. Lastly, a white gold variant with brilliant-cut diamonds on its bezel and lugs flaunts an iridescent mother-of-pearl dial, which accentuates the adorable mascot dressed as a circus performer complete with blue sapphire eyes.

Finished with a rose-cut diamond on the crown, each hand-decorated 38mm timepiece is animated by an innovative manufacture movement module conceived and produced entirely by Louis Vuitton’s specialist movement workshop in Geneva, La Fabrique du Temps.

Of course, Vivienne tells the time playfully. Instead of conventional hour and minute hands, the secret lies in the two elements that her hands point towards. Hidden among decorative elements on the dial are two apertures that serve as alternating indications of the hours. Every 60 minutes, the numeral indicating the hour changes instantaneously and switches positions between the two apertures near the mascot’s hands. When the new hour is displayed, the aperture framing the previous hour switches to a symbol matching the theme of the watch. While whimsical, this feature is significant as it’s the first time in modern
horology that an alternating jumping hour has been used in a wristwatch.

To indicate the minutes, an almost invisible wand extends from Vivienne’s heart and makes one full rotation around the dial each hour. This slim wand is tipped with a tarot card on the Fortune watch, playing card on the Casino version and a Louis Vuitton Monogram Flower juggling ball for the Circus model.

The Tambour Slim Vivienne Jumping Hours uses a multi-armed Geneva, or Maltese cross, combined with a complex multi-level cam and a sprung ruby roller to achieve its innovative hour display. This has many advantages over the conventional system of star wheels and jumper springs, such as better energy efficiency, higher precision in the time display and hour jump, as well as increased movement longevity.

Since Louis Vuitton’s legitimacy in traditional savoir faire goes back more than 150 years, it’s no surprise that the vibrant timepieces incorporate a variety of decorative techniques that breathe life into Vivienne and her fantasy world. Featured in a Louis Vuitton watch for the first time in 2014 with the Escale Worldtime, miniature hand-painting is used to animate Vivienne’s trompe-l’oeil magic. Every tarot or playing card, Monogram Flower and hour numeral is individually painted by artists in Louis Vuitton’s Geneva workshop.

Set with diamonds, the dials are crafted from decorative materials including aventurine, mother-of-pearl and a newly discovered ornamental gemstone from Pakistan named skarn. Also known as sannan-skarn, its brilliant green hue is due to the presence of chromium, while its fine-grained texture is derived from the process by which it was formed deep in the earth millions of years ago.

Launched in 2009, the Spin Time reimagined the jumping hour complication by converting the conventional display of the hours into a three-dimensional dance of cubes. Now, the kinetic performance of the maison’s signature timepiece has been radically transformed in the Tambour Spin Time Air Quantum, in which mysterious lights that appear to emanate from within the cubes add a fourth dimension.

A bold endeavour two years in the making, the Tambour Spin Time Air Quantum injects subversive innovation into the formality of haute horlogerie. The timepiece melds the art of watchmaking with the science of microelectronics seamlessly by incorporating 12 tiny light-emitting diodes or LED that light up the Spin Time display from within – an inspiration taken from the bioluminescence of deep-sea creatures.

Jean Arnault, director of marketing and development of Louis Vuitton Watches, elaborates: “Not only is the Tambour Spin Time Air Quantum a formidable horological feat, but it is also a unique and disruptive complicated hybrid watch that combines the best of the mechanical and electronic worlds at the service of both legibility and design.”

Indeed, the artful combination of the two fields is unique in the haute horlogerie world. It’s also undeniable that when it comes to finesse and ingenuity, the execution is quintessential Louis Vuitton. The futuristic Tambour Spin Time Air Quantum is seen in the bold aesthetics that set it apart from the mechanical Spin Time. Swathed in matte black DLC that contrasts against luminous green and yellow, both trademark colours of Super-Luminova, the watch bears a metallised emblem on its sapphire caseback that reinterprets the Louis Vuitton monogram as a circuit board.

At the heart of the innovative piece is the proprietary LV 68 calibre, developed by La Fabrique du Temps. Constructed to appear as if it is floating within the case, the 95-component movement is entirely mechanical and functions like a conventional Spin Time Air movement.

But here’s where the real magic happens. Activating the crown-integrated pusher illuminates the hour cubes – a feat accomplished by 12 tiny LEDs positioned directly on the top face of every cube. Each one projects a small yet pronounced beam of light into an individual cube and lights it up from within. The result is stunning illumination evocative of an extra-terrestrial or supernatural glow. The watch remains illuminated for another three seconds after the pusher is released.

An electronics assembly made up of a ring containing 12 LEDs (one for each cube) along with an integrated circuit and twin batteries is concealed under the case flange. So ingenious is this illumination system that the Tambour Spin Time Air Quantum possesses the same dimensions – a diameter of 42.5mm and height of 12.3mm – as the standard Spin Time Air. The LEDs allow the lighting system to be activated six to seven times a day, every day for three years, before the batteries need replacing. A subtle, lighted ring at the base of the crown functions as a battery-level indicator, which will flicker when the batteries require replacement.

Not only is the timepiece cutting edge in its technology, but also in its physical characteristics. While the cubes in a conventional Spin Time Air are milled aluminium, they are rendered in fused silica, which is glass made of almost pure silicon dioxide, in the new Tambour Spin Time Air Quantum. The absence of impurities and additives calls for a much higher working temperature, requiring a more laborious manufacturing process. However, it is this purity that makes fused silica an ideal material for exacting applications, such as optical lenses, semiconductors, as well as the hour cubes that channel the LED light.

Although the dial of the Tambour Spin Time Air Quantum is decorated with techniques synonymous with traditional haute horlogerie, one must expect a Louis Vuitton twist. The Côtes de Genève parallel-striped motif in the dial’s central portion is a fusion of new and old, on which the pattern is applied to the dial plate before it is DLC coated and overlaid with the Louis Vuitton monogram printed in yellow Super-Luminova. The lower dial plate is similarly coated in DLC to lend it a restrained gleam when it catches the light.

Encircling the Spin Time display is a matte sand-blasted flange with 12 hour indexes, all meticulously engraved with a diamond-tipped tool. Despite being recessed, the indexes’ mirror-finished surfaces give them the appearance of appliques when seen from certain angles. Haute horlogerie techniques are also employed on the exterior of the DLC-finished Tambour titanium case that boasts a finely frosted surface accented with mirror-polished chamfers, also known as anglage.