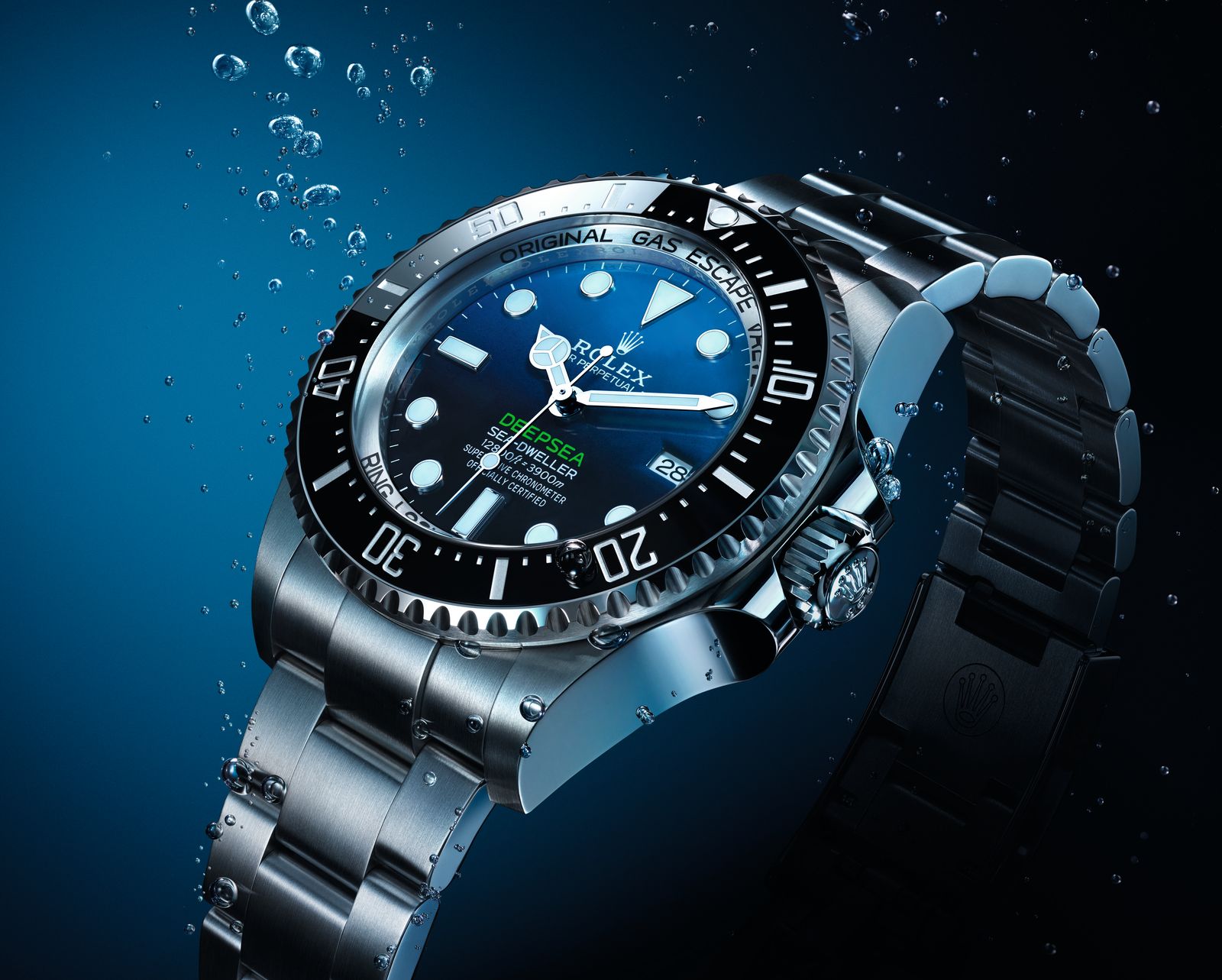 Rolex is no stranger to deep waters. It all began when the brand unveiled the Oyster, the world’s first waterproof wristwatch, in 1926. As undersea explorers probed ever greater depths, Rolex kept busy, continuously innovating to meet their needs. It isn’t only about waterproofness. The helium escape valve that first appeared on 1967’s Oyster Perpetual Sea-Dweller, for instance, was a significant development that ensured the timepiece’s robustness even when it was used for saturation diving.

The Oyster Perpetual Rolex Deepsea is a whole different beast. This timepiece is the pinnacle of Rolex’s dive watch offerings, and traces its lineage back to 1960, when the bathyscaphe Trieste made the first ever dive down to Challenger Deep. At -10,916 metres, Challenger Deep is the deepest known point on Earth. Strapped to the outside of the Trieste as it made its descent was the Deep Sea Special, an experimental Rolex timepiece that dived and surfaced without skipping a beat – literally.

The Oyster Perpetual Rolex Deepsea is the namesake of the experimental watch from 1960, and was first introduced in 2008. This timepiece was (and remains) the top echelon in Rolex’s dive watch family. It is waterproof to 3,900 metres, well past the limit that humans can go without the protection of a submersible, and represents a level of over-engineering that translates into a wide safety margin for its wearer.

To be frank, any timepiece can be made waterproof to 3,900 metres. Doing so while keeping it wearable, however, is another matter entirely. The Deepsea’s manageable size (44mm wide, 17.7mm high) is largely because of its innovative Ringlock System. Through a combination of material choice and structural engineering, the Ringlock System allows the watch to remain svelte relative to its extremely high waterproofness. Rolex has engineered the watch to withstand compressive forces by distributing them away from just the case middle. Instead, these forces are utilised to press components even more tightly together, with a slightly elastic alloy thrown in to further withstand these forces.

This year, the Rolex Deepsea has been updated as part of the brand’s unending quest for perfection. The watch’s bracelet has been widened to improve its overall proportions, while its lugs and sides have also been tweaked to accompany this change. The new Rolex Deepsea has been fitted with calibre 3235 – Rolex’s latest and greatest movement yet. This calibre uses Rolex’s proprietary (and relatively new) Chronergy escapement, which isn’t just more energy efficient, but also more shock resistant while being insensitive to magnetism. Improvements are quantifiable; the new movement has a longer power reserve of 70 hours.

What’s quality without assurance? Like every Rolex timepiece, the Rolex Deepsea carries the manufacturer’s Superlative Chronometer certification, which consists of a COSC-certified movement, and a further in-house certification by Rolex after the watch is cased up. A five-year warranty backs the watch. For both desk divers and professional ones, this is as good as it gets – until Rolex improves upon it further, that is.