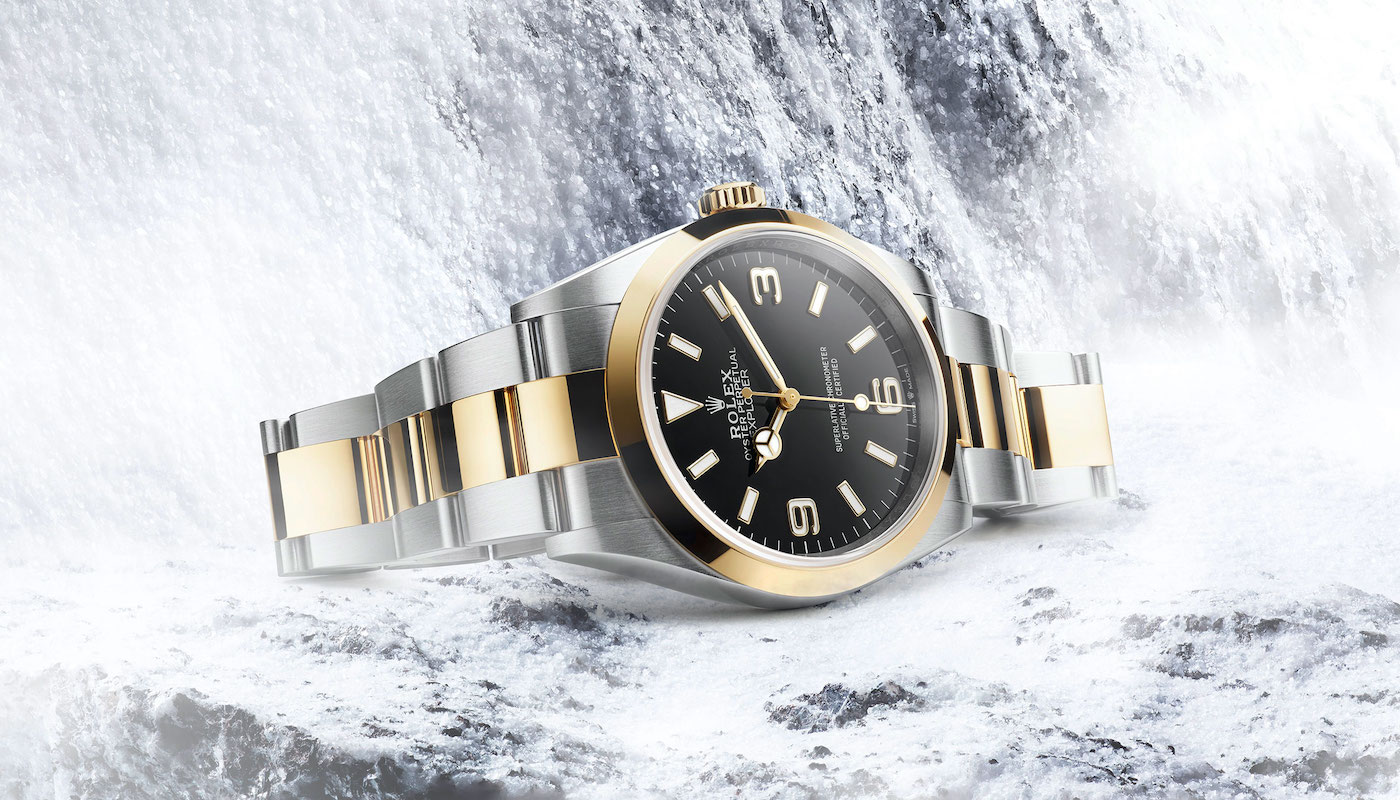 Whether it’s supporting expeditions to this planet’s farthest-flung corners, working with the National Geographic Society on restoring the ecosystem, or creating the most durable and accurate timepieces, Rolex pushes the boundaries of exploration.

When, during World War I, Rolex moved its operations from London – where its co-founder Hans Wilsdorf had set up the business just over a decade earlier – to Switzerland, the company began to redouble its efforts to produce the world’s most rugged, dependable and accurate timepieces. The eventual result was the patenting and introduction in 1926 of the first Rolex Oyster, which in addition to being dustproof was also the first commercially produced watch that could be claimed to be properly waterproof.

A man whose ideas about selling timepieces were, if not totally ahead of their time, then at least at the leading edge of marketing, Wilsdorf understood implicitly how to build on innovation to create a global reputation for his brand. He promptly signed up a young British swimmer, Mercedes Gleitz, who demonstrated just how waterproof and rugged the Oyster was when she swam the English Channel – the first woman to do so – with a Rolex strapped to her wrist. Prominent newspaper and magazine advertisements, which trumpeted Gleitz’s achievement and Rolex’s part in it, convinced Wilsdorf of the value of involving his brand in extraordinary feats of endeavour and exploration – all of which would also to result in the technological benefits gained from testing his timepieces in “living laboratories” that were among some of the most extreme and demanding places on Earth.

By the 1930s, Rolex was actively involved in supporting expeditions of exploration, and its watches were venturing far from the beaten path, for example visiting the east coast of Greenland in 1930-31 with the aristocratic Briton, Henry George “Gino” Watkins. Two decades later, in the early 1950s, the brand supplied watches to the British-led expedition that first conquered the world’s highest peak, Mount Everest. And in 1960, when the Swiss oceanographer Jacques Piccard and
US Navy lieutenant Don Walsh descended in the bathyscaphe Trieste to the lowest spot on the planet – a depth of more than 10,900 metres in the Mariana Trench – they carried with them an experimental Rolex Oyster that was found to be in perfect working condition when it arrived back at the surface of the Pacific Ocean.

By that time, Rolex wasn’t simply relying on advertising to publicise such remarkable achievements. In 1954, the Swiss brand signed a partnership with the National Geographic Society of the United States and, in that same year, the society’s famous yellow-bordered magazine carried a story – profusely illustrated, of course – on the Everest expedition, and the ascent to the summit by New Zealander Sir Edmund Hillary and the Nepalese Tenzing Norgay. Piccard and Walsh’s descent in the Trieste received similar treatment, as did the solo descent by the filmmaker and Rolex testimonee James Cameron in the undersea vehicle Deepsea Challenger some 52 years later, in 2012. Cameron took with him – strapped to a robotic arm outside of the vehicle – a prototype Rolex Deepsea Challenge watch, whose 1,200-bar waterproof rating was tested to the limits and which returned to sea level operating with perfect accuracy.

However, beyond the obvious advantages that activities such as these have brought to the brand, and to our wider understanding of the world in which we live, Rolex and National Geographic expanded their partnership in 2019 in a way that also brings tangible benefits to nature, the environment and, indeed, Earth itself, by launching the Perpetual Planet initiative. Just as the intricate self-winding mechanism of a Rolex timepiece is designed to function and keep time perfectly, year in and year out, so the Perpetual Planet initiative supports individuals and organisations devoted to ensuring, restoring and maintaining in perpetuity the delicate balance of the ecosystems in which we live. The ultimate aim is to equip communities with the scientific information they need to combat the most extreme challenges resulting from climate change.

Among the programmes initiated since the launch of Perpetual Planet are expeditions designed to explore the most extreme environments on Earth and return with detailed information on the effects of climate change in these regions. The first, in April-June 2019, was a return to Mount Everest led by National Geographic and Nepal’s Tribhuvan University, to measure the effects of global warming on the Hindu Kush and Himalayan glaciers, which crucially provide water to lower-lying regions. That was followed early last year when a team of National Geographic scientists and explorers – who, among other things, were equipped with Rolex Explorer II watches – travelled to Tupungato Volcano in the Chilean Andes, where they installed what were to become the highest weather stations in the world, which would provide invaluable insights on how to preserve dwindling resources of mountain water.

By supporting National Geographic’s Explorers Festival since 2017, Rolex also helps foster the development of a broad international community of scientists, conservationists and educators, who are able to share their knowledge and experience through this forum. Moreover, the Rolex Awards for Enterprise programme includes 24 Laureates who have been associated with National Geographic, either as Explorers or grant recipients. Among them are conservation biologist Erika Cuéllar, who has worked with the peoples of the Andes’ Gran Chaco, and Johan Reinhard, who developed a cultural anthropology programme in the mountains of South America.

Dating to 1953 and that first ascent of Everest, the Rolex Perpetual Explorer is not only a classic, but also arguably the classic watch, combining robustness and legibility – and especially the vivid blue Chromalight now used for the luminous hands, numbers and indexes – with the kind of refined simplicity for which Rolex is famous. This year, the latest-generation Explorer has returned to its original diameter of 36mm, though its new self-winding calibre 3230 features such advanced technology as a patented Chronergy escapement, blue Parachrom hairspring and Paraflex shock absorbers, and offers a power reserve of 70 hours. Like all Rolexes, the Explorer carries Superlative Chronometer certification, a global standard for mechanical watch accuracy and performance. Of course, the Explorer continues to be available in Oystersteel with matching Oyster bracelet, but in a dazzling touch of luxury and elegance, it also now comes in a beautiful Rolesor version, with yellow-gold bezel, crown, hands, numerals, indexes and centre bracelet links, making it equally at home on the roof of the world or a stylish rooftop party.

At 42mm in diameter, the latest Explorer II, which dates back to 1971, also embraces similar technology in its calibre 3285, whose nickel-phosphorus construction makes it highly magnetism resistant and which also provides a reserve of 70 hours. It also features a fourth 24-hour hand in bright orange, which together with bezel indications permit the wearer to distinguish between day and night in those far-flung regions of the world where the two are barely distinguishable.

The Explorer II’s white dial, with hands and hour markers in white gold and blue Chromalight luminescence, as well as a date window with Cyclops lens, is highly readable in all conditions. The watch comes in an Oystersteel case with matching Oyster bracelet, and is waterproof to 10 bar.

Explorer or Explorer II? Either way, you’ll be equipped to take on the world’s most extreme places – just as Rolex itself has been doing for the past nine decades, pushing the farthest boundaries both of understanding our world and pursuing watchmaking excellence.

(Hero Image: Now available in a luxurious rolesor version, the Rolex Explorer is a direct descendent of watches used on the first successful ascent of Mount Everest)