If there’s one thing Jacob & Co.’s known for, it’s for its larger-than-life approach to watchmaking.

Add to the equation an artist that shares the very same philosophy with his paintings, and you’ve gotten yourself one of the most exuberant and collectible watch collaborations of the year.

The artist in question? Alec Monopoly, a renowned artist from New York that shot to fame for his tongue-in-cheek paintings inspired by a certain transaction-based board game. His most recognisable character — Mr. Monopoly — resonated with people as a metaphor for corporate greed and his disdain for Wall Street scammers, and was often depicted brandishing bags of cash alongside other famously rich and greedy characters like Scrooge McDuck, Richie Rich, and who can forget, Mr. Burns.

Although slightly ironic, seeing as this US$600,000 (approx. S$810,000) limited edition watch is probably only affordable for said Wall Street wolves, the Jacob & Co. Astronomia Alec Monopoly is still a masterclass in craftsmanship and creativity. Instead of the usual jewelled planets roaming the 50mm x 25mm case, the watch sees four of the artist’s famous characters that were tailored to fit within the case without interfering with the movement and complications.

First, there’s Alec Monopoly himself, who dons a mask and has his arms spread holding his “money wings”. Scrooge McDuck holds a bag of cash, while Mr Monopoly clutches on to a melting pink dollar-sign ice-cream cone. Lastly, there’s a red dollar sign with colourfully painted sides. All of these were hand-sculpted, cast in gold, and then hand-painted by the artist himself. 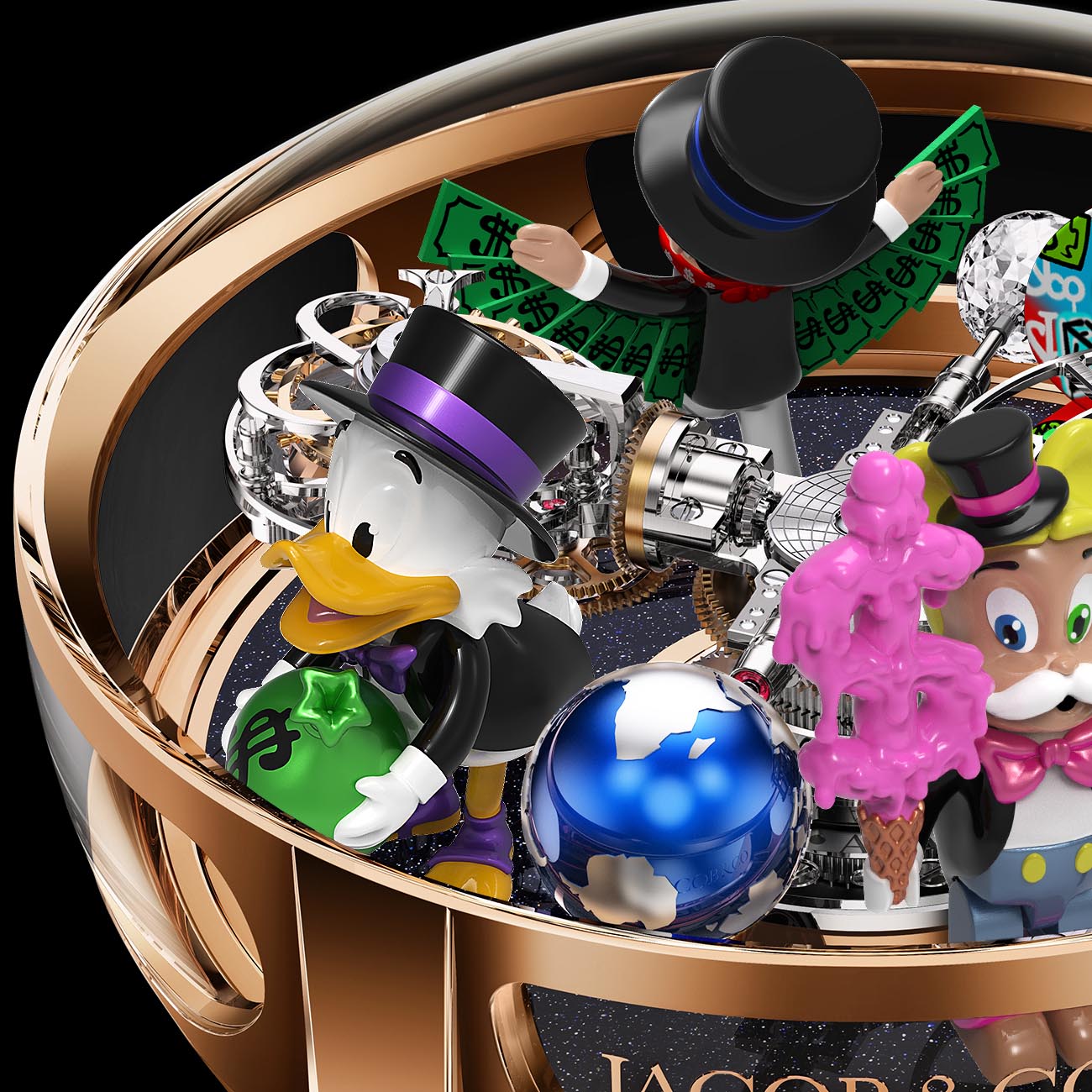 Like the other pieces in the Astronomia line, the watch features a four-arm vertical movement that’s headlined by a double-axis tourbillon. A hand-lacquered magnesium globe and a one-carat diamond in the jeweller’s exclusive Jacob cut rotate on their axes for maximum visual flair, as a time display with bright green hands sit on the three o’clock of the timepiece. Powering this theatrical performance is the manual winding JCAM25, put together with hand-finished components to haute horlogerie standards.

Only nine of the Jacob & Co. Astronomia Alec Monopoly will be made, so you’ll want to hit up your contacts at the luxury watchmaker fast if you’re interested.