If flying tourbillons are your weakness, these models might just tickle your fancy. 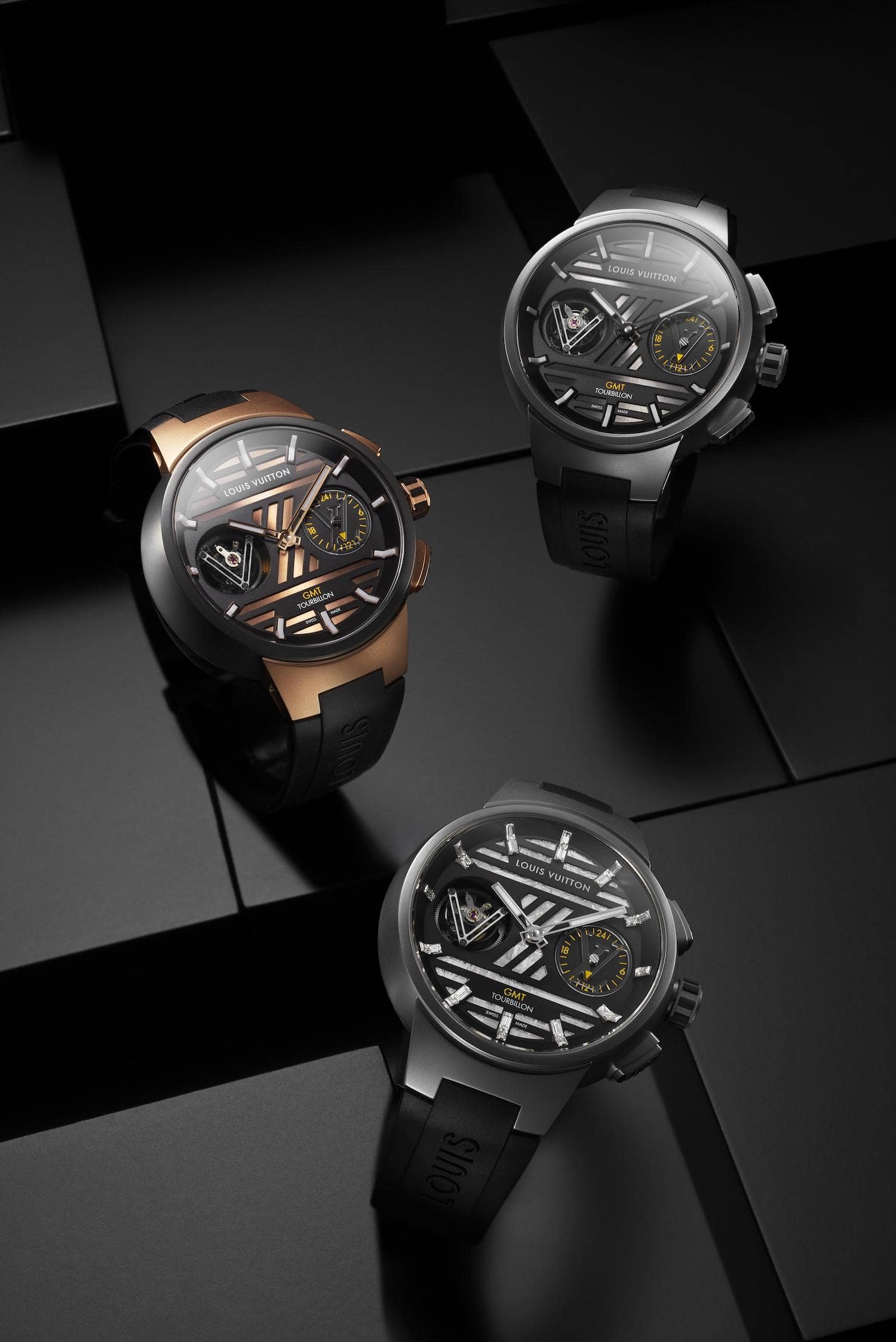 The French house’s contribution to high watchmaking this year is a flying tourbillon-fitted GMT creation peppered with signature motifs, such as the glorious initial “V” – a tribute to Gaston Vuitton. Developed by the maison’s own manufacture La Fabrique du Temps Louis Vuitton, the Tambour Curve GMT Flying Tourbillon features a case whose shape is an extrapolation of last year’s Tambour Curve Flying Tourbillon Poinçon de Genève.

Made of shot-blasted grade 5 titanium, the 46mm case middle of this dynamic model draws inspiration from the Möbius strip. Stretched and elongated, it catches the eye with the convex curve of its bezel and crystal.

The watch has two push pieces on the right side of its case in order to simplify the setting of the GMT function. This enables the dedicated indicator, positioned within the open counter at 3 o’clock, to move forward or backwards. At the same time, it also allows Louis Vuitton to maintain the symmetry of the watch and further highlight the case’s soft proportions.

Powered by the in-house calibre LV 82, the Tambour Curve GMT Flying Tourbillon is available entirely in titanium (top); with lugs, pushers and winding crown in pink gold; or in a full titanium version with a dial carved from the Gibeon meteorite that landed in Namibia and hour markers set with baguette-cut diamonds. The Admiral collection debuted more than 60 years ago, and over the course of its existence the watch has been reinterpreted multiple times. This year is no different. Visually stunning, the Admiral 45 Automatic Openworked Flying Tourbillon Carbon & Gold marks the introduction of an all-new case material by Corum.

Although the watch is limited to 48 pieces, no two pieces are aesthetically identical, thanks to a composite of carbon and 18k gold glitter that makes up the dynamic case. As gold flakes seesaw within the carbon/resin mix during the manufacturing process, they begin to settle in organically in a random distribution, resulting in a one-of-a-kind appearance. As the material is lighter than steel and titanium, the large 45mm timepiece still feels very comfortable on the wrist.

At the heart of the watch lies CO 298, an extravagant open-worked automatic flying tourbillon movement offering 72 hours of power reserve. Developed in-house and accented with gold, the 3Hz movement pairs well with the gold-flecked case and its black PVD-coated components can be seen from the front and back of the case. Function-wise, a power reserve indicator is positioned at 9 o’clock, while a felicitous three-minute counter appears at 3 o’clock as a nod to the house emblem – a key with three petals.

Watch Report 2021: Our favourite fancy dial watches of the year

Corum’s Golden Bridge Round is now plugged into cables