Watches and Wonders Geneva 2022: Brands that have outdone themselves 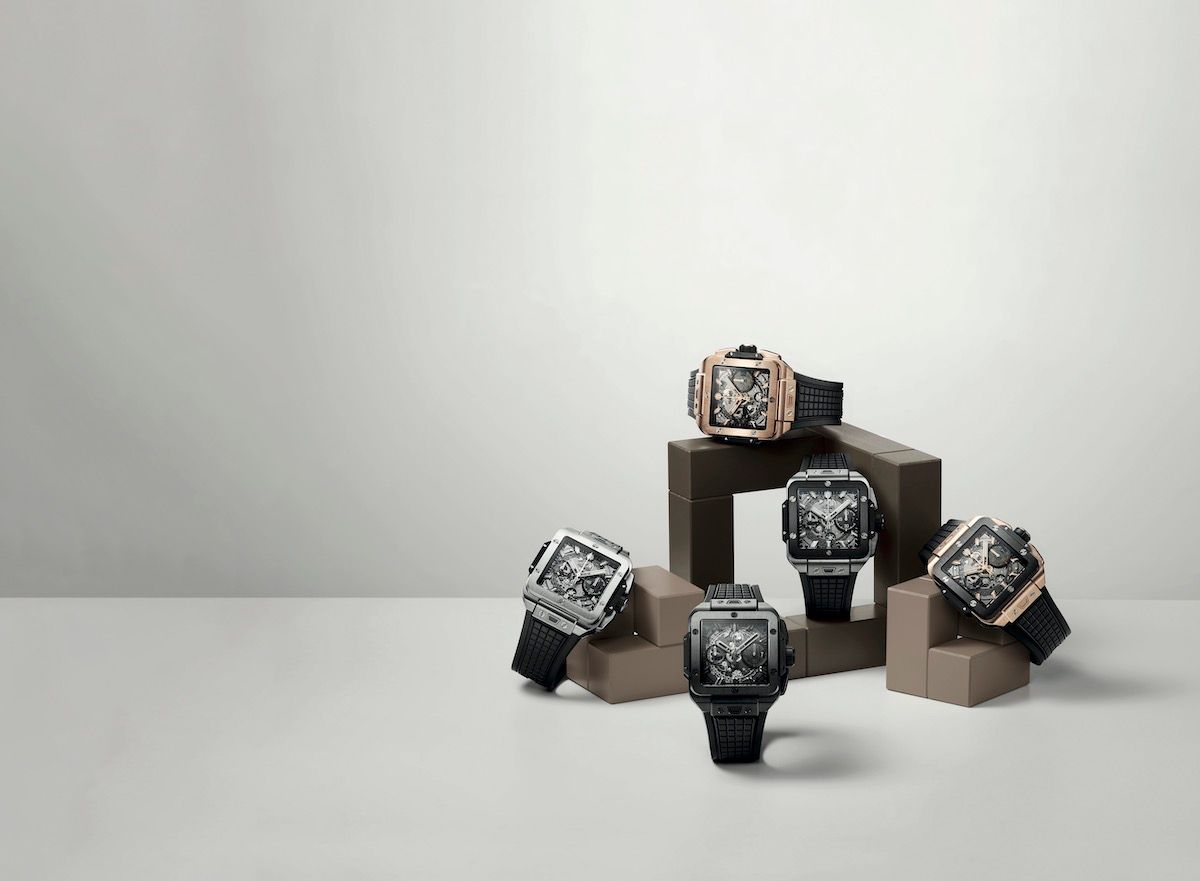 Style
Watches and Wonders Geneva 2022: Brands that have outdone themselves
Share
Next article

In our third and final report on Watches and Wonders Geneva 2022, we highlight four manufactures who have pushed the boundaries of design, gem-cutting and technical know-how.

With an impressive line-up of J12 releases at the fair, including a new automatic 33mm, whimsical models honouring Mademoiselle Gabrielle and a six-piece capsule collection, it’s evident that the iconic timepiece continues to take centre stage in the French maison’s watchmaking repertoire.

Beyond new iterations, this year marks a new chapter for the J12 with the Calibre 5, housed in the J12 Diamond Tourbillon featuring a 0.18-carat solitaire placed on the centre of the tourbillon cage. This is Chanel’s first flying tourbillon and fifth high complication movement, designed by Arnaud Chastaingt, director of the maison’s Watchmaking Creation Studio, and developed and assembled at the Chanel Manufacture at La Chaux-de-Fonds.

“I wanted to endow the J12 watch with a diamond. Set at the centre of the tourbillon, the solitaire diamond follows the mechanism of the movement, giving time a rhythm that is precious and meditative, almost hypnotic,” Chastaingt elaborates.

Of course, in true Chanel fashion, no ordinary round solitaire would do, as Chastaingt continues: “We created a bespoke 65-facet cut: a unique cut for a unique watch, and one that I continue to find fascinating and inspiring. Placing a diamond of this size on a tourbillon was an obsession for me. It was a technical challenge that the Chanel Manufacture teams executed magnificently, giving life to the new J12 Diamond Tourbillon.”

Visually stunning both front and back, the exposed mechanism is faithful to the graphic identity of Chanel Fine Watchmaking. The movement’s architecture is constructed in a series of circular bridges in black, no less. The diamonds’ brilliance is complemented by the finesse of the beveling and exceptional finishes of the movement. The hands, tourbillon cage and crown are also set with diamonds. The J12 Tourbillon Diamond is available in two 38mm versions, each limited to 55 pieces: in glossy black ceramic with the bezel embellished with 34 baguette-cut diamonds or in full matte black ceramic.

Designed by Henri d’Origny in 1978, the Arceau watch lends itself to a new expression of style and evokes the spirit of travel according to Hermès. Presented in platinum and titanium or steel, its round case with asymmetrical lugs reveals the maison’s singular reinterpretation of world time, a classic haute horlogerie complication.

The flange on the dial shows 24 timezones indicated by respective cities of reference. Pressing the pusher on the left side of the case moves the subdial with hour, minute hands and Arabic numerals to the representative city, telling you the local time. This moving disc also has a small red arrow that indicates the city. The 24-hour home time is shown in an aperture at 12 o’clock.

The subdial or satellite, as Hermès terms it, sweeps over a galvanised dial featuring a mysterious fantasy map with laser-engraved and lacquered oceans. The image was created by French graphic designer Jérôme Colliard for the Planisphère d’un Monde Équestre (Planisphere of an Equestrian) silk scarf for the 2016 Saut Hermès showjumping competition in Paris.

Both the mobile disc and home-time indicator are driven by an exclusive 122-component “Travelling Time” module, which is integrated within the Hermès H1837 mechanical self-winding movement. Specially developed for Hermès by complications specialist Chronode, the slim 4.4mm mechanism powers the hours, minutes and dual-time display with city indication.

Two Arceau Le Temps Voyageur models are offered, including a 41mm platinum version with matte black DLC-treated titanium bezel and a 38mm blue steel edition. Both are fitted with alligator or Swift calfskin straps made in Hermès Horloger’s own workshops using the house’s long-established saddle-making and leather craftsmanship expertise.

A stand-out piece among the manufacture’s host of new releases at the fair is its very first reinterpretation of a square watch – the Square Bang Unico. With this new timepiece, Hublot adds a new pillar, aptly named The Shaped Collection, to sit alongside the Spirit of Big Bang.

Of course, a timepiece with a completely new case shape posed many challenges that the manufacture’s workshop tackled deftly. First, there’s the question of the movement. Since every calibre has the wheel as its basic component, a round movement is needed. A very specific arrangement
is needed to place a round movement that works harmoniously in a square case. While many watchmakers prefer to hide the movement, Hublot decided to reveal the watch’s inner workings for the bold new creation.

The next challenge was the modular construction of the case, which had to include Hublot’s DNA featuring a central housing with an upper and lower plate to enable an array of combinations and transformations. The watch also guarantees a water resistance of 100m, a tricky feat since its square shape made the task even harder for the maison’s watchmakers to achieve.

The case size is also an important factor to ensure that this model is ergonomic and provides the same comfort on the wrist as that of the 42mm Big Bang. The Square Bang Unico’s dial still retains a sandwich construction, which gives it different levels of depth and an architectural look. And like the Big Bang, the Square Bang Unico’s dial features an extensive use of sapphire that gives a clear view of the Unico movement.

Further emphasising the Square Bang Unico’s identity is a new strap decorated with ‘chocolate squares’. Specially created for this new model, the textured pattern includes four rows of raised squares that resemble a bar of the dark sweet treat. Thanks to the interchangeable One Click system, the wearer can refresh the look of his or her watch effortlessly with a strap from an impressive range of rubber, alligator, as well as soft-touch leather versions that will be introduced soon.

As one would expect from Hublot, the finishing has a very modern look – an over-moulded rubber crown; polished and sandblasted screws;
push-pieces decorated with rubber ‘chocolate squares’; polished satin bottom and rhodium-plated or gold-plated hands, depending on the model.

The Square Bang Unico is available in five 42mm references. Two models are in titanium or King Gold, while the other two combine titanium or King Gold with a black ceramic bezel. For Hublot fans, there is the 250-piece limited edition Square Bang Unico All Black. Each watch comes with a black rubber strap and a folding clasp in the same material as the case. The timepieces are powered by the HUB1280 Unico Manufacture movement, a 354-component automatic chronograph.

A departure from Grand Seiko’s watchmaking is the remarkable Kodo Constant-Force Tourbillon SLGT003, another scene stealer at the fair. This the first time that the 62-year-old Japanese manufacture has produced a skeletonised tourbillon and a mechanical complication watch – a project that took a total of 10 years to realise.

The star of the 43.8mm model is the magnificent Calibre 9ST1, which sees the constant-force mechanism housed within the tourbillon cage – a first in horological history in which both components are combined as one unit on a single axis. More than just about aesthetics, this integration delivers practical benefits. Since there are no wheels or components between both mechanisms, it leads to an increased power reserve of 50 hours for the constant-force mechanism (the power reserve of the watch is 72 hours). However, the practicality for which Grand Seiko is renowned is still realised in the small details. A closer look at the constant-force carriage reveals a ruby on one of its arms, which acts as a small seconds hand.

The hypnotic mechanism’s motion and its unique ticking give Kodo – Japanese for heartbeat – its signature sound. The inner tourbillon carriage rotates smoothly as the balance steadily vibrates at eight beats per second, while the outer constant-force carriage follows its rotation at exact one-second intervals. The captivating sounds of the escapement and of the once-per-second impulse of the constant-force mechanism harmonise perfectly in a regular rhythm to create, for both the eyes and ears, a deeply satisfying and reassuring heartbeat.

The watch’s openwork design and sapphire caseback reveal its intricate inner workings. Some parts of its case, made from platinum and Grand Seiko’s Brilliant Hard Titanium, are Zaratsu polished, while others feature a hairline finish. The timepiece’s elegance is further elevated by a calf strap that is specially treated in the same traditional method used to create the high-durability material of Samurai armour and hand-painted with Urushi lacquer. Also offered with a crocodile strap, the watch will be available in a limited edition of 20 pieces this October.

This story first appeared in the July 2022 issue of Prestige Singapore.