When art meets horology: Timepiece-inspired artworks to own 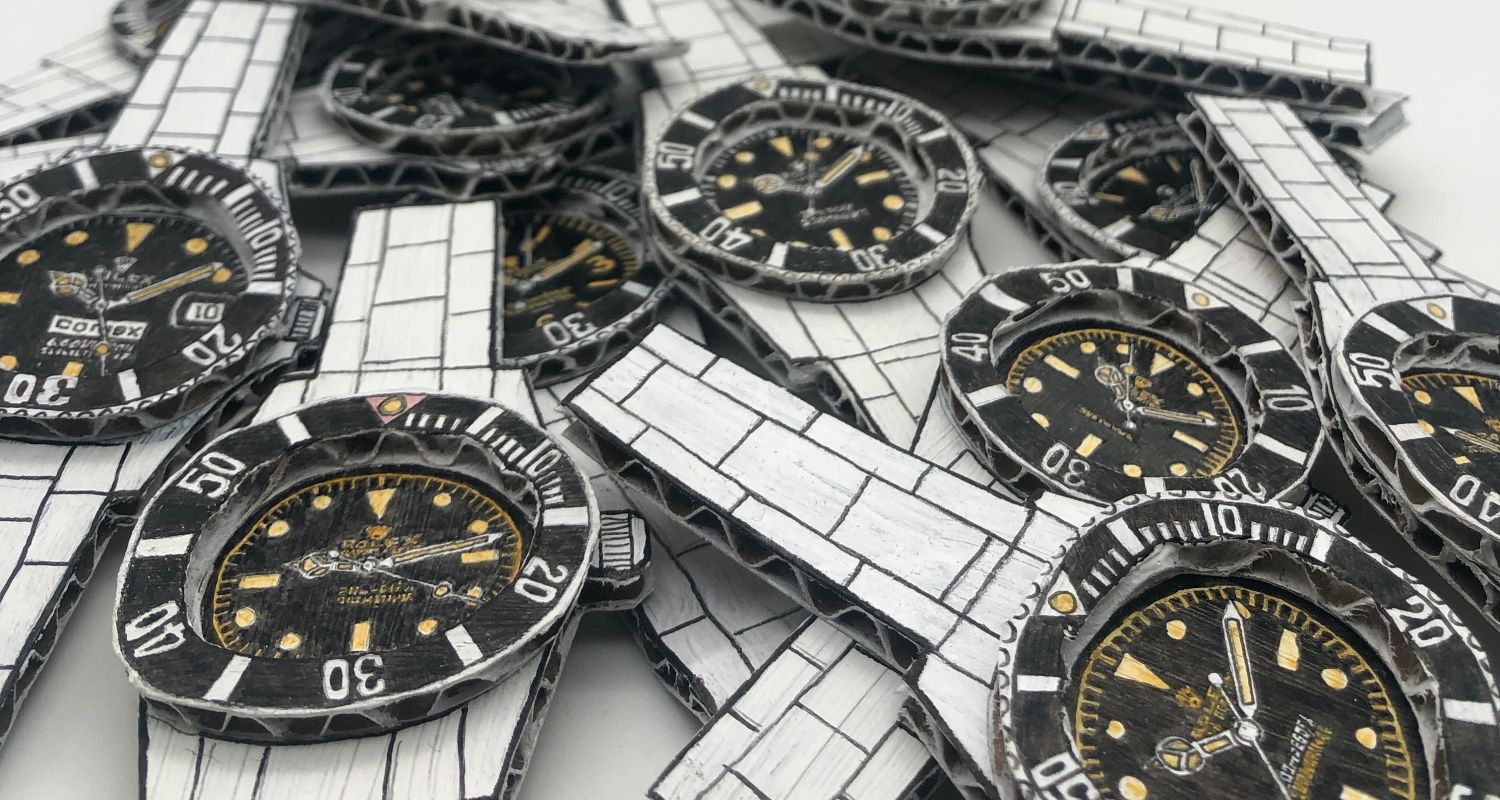 Style
When art meets horology: Timepiece-inspired artworks to own
Share
Next article

Inspiration comes in all shapes and forms but these five artists and creative talents all have one thing on their mind: timepieces. Stephanie Ip discusses art, horology and collecting habits with these watch enthusiasts.

Treating timepieces as though they’re works of fine art is nothing new. Watchmaking, you could say, is an art form itself, a study of how science, craft, art, innovation and creativity come together to create tiny masterpieces with the ability to tell the passing of time. It’s little wonder, then, that a growing number of artists are finding inspiration in the
the wonderful world of horology, taking pen to paper, camera to eye, creating CAD drawings and striking sculptures big and small, to recreate and reimagine the world’s greatest horological treasures.

It’s a new form of the watchmaking arts and one that’s sure to capture the attention of watch collectors worldwide, who seek to find new avenues for their collecting habits. No Tiffany Blue Nautilus, no problem – you could own an art piece inspired by it, if that’s what you will. We meet five artists, known and emerging, who specialise in this form of art, delve a little deeper into their creative process, and find out what’s in their own watch collections.

Read on to discover five artists who specialise in creating timepiece-inspired art.

Alex Eisenzammer gave me the most humble self-description when I asked him about his background, simply saying he’s a self-made artist from France, whose mother’s artistic career influenced him to embrace the same.

But his works speak for themselves: many seasoned collectors will have seen his art highlighted on the Instagram page of MB&F, which commissioned him to render creative illustrations of its avant-garde timepieces. Or perhaps they’ll remember his collaboration with French watchmaker Heritier on a limited run of pocket squares. L’Atelier featured a watch design inspired by the Audemars Piguet Royal Oak Selfwinding Perpetual Calendar Ultra-Thin, more simply known as the RD#2, the thinnest perpetual calendar watch on the market.

Eisenzammer started drawing watches three years ago, starting with a minimalistic art piece of his first Omega, which he calls “a very unusual Cosmic with some Genta feeling to it”. Watches to him represented an infinite pool of inspiration. “It’s a great way to mix my passion for drawing and watch collecting,” he says. “I find it very interesting to recreate these watch shapes, sometimes very edgy or some other times very smooth and round. There’s an infinite variety in them, that’s what I love.”

His works are all digital, always on his graphic tablet, which allows him to sketch out fast ideas on the go. “First I see the watch and I create a universe that I think would suit it best,” he says of his creative process. “Sometimes it’s inspired by the watch history, or the way it’s designed. But most times it’s just purely out of my own imagination and how the watch inspires me.”

His collection is as diverse as his artworks. “I love having a variety of models but almost never at the same time,” says Eisenzammer. “I work by the period, so my latest cool period is the Cartier craziness. I love to wear the Santos or the Tank Must.”

But otherwise, Eisenzammer can veer in the direction of Polerouter – a Gerald Genta design from 1954 for Universal Genève, or even unusual war-time pieces from Movado. “I think there are awesome designs in every era and in every brand,” says Eisenzammer. “Vintage is my way to go.”

Not having an art background hasn’t stopped hard-headed collectors from entering the creative space – the watch community is largely a friendly one, especially if your passion for watchmaking is genuine. Mumbai -born Sakib Noori moved to Singapore 10 years ago and started a watch-related YouTube channel to share his passion with his audiences. Soon, this turned into a full-blown passion for creating prints and artworks, and he stopped uploading on YouTube to focus more on creating horology-inspired pieces on Instagram.

“It initially started out as an idea I wanted to do for T-shirts, but eventually I tested it out with prints first, due to it being a cheaper investment,” he says. “I had a vision of the artworks I wanted to make and the first one was the panda Rolex Daytona. I worked with an illustrator to bring that vision to life.”

Noori’s initial art pieces revolved around a 50/50 design with the watches paired with their most famous nicknames: Batman, Pepsi, Panda, etc. Later, he let his imagination run wild – “I have some really out-there ideas and some more conservative ones, so it appeals to different audiences,” he says. “I really have to give props to two brilliant illustrators I work with.”

The first watch Noori bought that got him really into watches, in mid-2019, was the Omega Seamaster Planet Ocean. “From there, I really got into them and just wanted to learn more and more about them. To be honest, it was surprising to me as well how invested I was in finding out more about these objects.”

But his favourite watch to date is his Oris Pointer Date Bronze 80th Anniversary. “It was given to me by my partner after our first year of being together,” he says.

Architect-turned-artist Quentin Carnaille began creating works of art with watch parts in 2005 while he was still studying architecture in Belgium. His first horological work of art was “simply a cluster of timepieces organised in a chaotic fashion by the magnetism of a magnet”. A full-time artist for the last 12 years, Carnaille has exhibited his works around the world, from Geneva to Dubai and Hong Kong.

He began looking at watches and time as a source of inspiration because he was fascinated by the aesthetics of a watch movement. “I find it fascinating that the movement is beautiful when it was, above all, designed to meet the technical constraint of telling time,” he tells me. “And then I started to wonder about the notion of time from a metaphysical point of view and that completely got me into a crazy artistic adventure from which I can no longer extract myself.”

I first encountered Carnaille’s works at the MB&F M.A.D. Gallery in Hong Kong and was immediately captivated by the poetic nature of Apensanteur. The work, which translates to weightlessness, is a levitating disk composed of thousands of vintage watch components sourced from watchmakers and antique dealers and held in place with a powerful magnet to depict the link between astronomy and mechanical watchmaking.

Time-keeping wasn’t a top priority for Carnaille in his work, or in real life. His collection amounts to several thousand watches, he tells me, which “are generally without marques and, for the majority, are very old watches over 100 years old”.

In terms of aesthetics, he loves the look and refinement of F.P. Journe timepieces. “But I only wear my own watches that don’t tell the time and keep me from passing time.”

Born and raised in Toronto, Gabriel Lau was told as a child he had a talent for art. After studying product design, he moved to Hong Kong in 2013 to pursue graphic design work. He first began to draw watches in 2019 using paper and pencil – his first drawing was of a Cartier-dial Rolex 1680 Submariner for a friend – before transitioning to the current medium he’s now known for: creating irresistibly charming cardboard versions, painted in acrylic and ink, of some of the world’s most sought-after watches, from vintage Rolexes to the latest Patek Philippe Nautilus in Tiffany blue.

“I thought it would be really fun to draw the watches that were unattainable to me,” he says. “You can say I was collecting paper watches to fulfil my want to collect real watches.”

Watches inspire his art, as Lau himself is a huge watch enthusiast with a penchant for vintage Rolexes. “After moving to Hong Kong, I was exposed to so much more art and watches, especially at auction exhibitions,” he says. “I have a deep appreciation for high-end watch engineering and design, but haute horlogerie comes at a price. Making these rare and high-end watches that are unobtainable for me was a way for me to experience them myself. I also love all the small details of a watch, so I highlight those details through my art.”

For every watch he makes, Lau first researches the details and specifications of each one to ensure he’s drawing and painting every single visible detail, even keeping the same case diameter as the real thing. “So that when the watch is finished, I kind of get to experience what the real watch would be like,” he says.

Lau’s most treasured timepiece is his Speedmaster Coaxial 57. “It was a dream watch for me when it first came out and at the time I couldn’t justify buying one, but on my wedding day my wife surprised me with that amazing watch.”
He’s currently on the hunt for a vintage 5513 Pre-Comex Submariner. “It’ll be the watch to commemorate all my watch art milestones,” he says.

A lot of times, it just takes one timepiece to take you down a rabbit hole of no return. That’s how it all happened for Wing Choi, who picked up her iPad one day and decided to draw her partner’s watch as a gift to him – a Rolex Yachtmaster Ref 16622. The act reignited her love for illustration, as well as sparking her interest in watches in general.

“My interest in watches developed only in the middle of last year as I looked into more details about what my partner was so obsessed with,” Choi tells me. “The more time I spent looking at various timepieces, the more
I became fascinated by the craftsmanship, precision and attention to detail of all these watches.

“That’s why you can see all the details in my watch prints. I aim for a hyper-realistic approach,” she says. “As I’m fairly new to horology, as well as this type of art, I’m still consistently looking for different ways and ideas to bring my art to life and to elevate it to the next level.”

Choi mostly draws watches she’s encountered in real life and has been able to examine in detail. If a client commissions a piece she hasn’t seen before, she’ll look for high-resolution images and macro-shot details to gain
a better understanding of the watch.

She doesn’t deem herself a collector just yet. “Rather, I’m a watch enthusiast,” she says. “My favourite piece right now is my latest addition, a beautiful and elegant Cartier Colisée Ref 19801, with a factory diamond-set dial. It’s a rare piece from the Colisée collection and it was definitely love at first sight.”