Bawah Reserve: Digital Detox In The Middle Of Glorious Nowhere 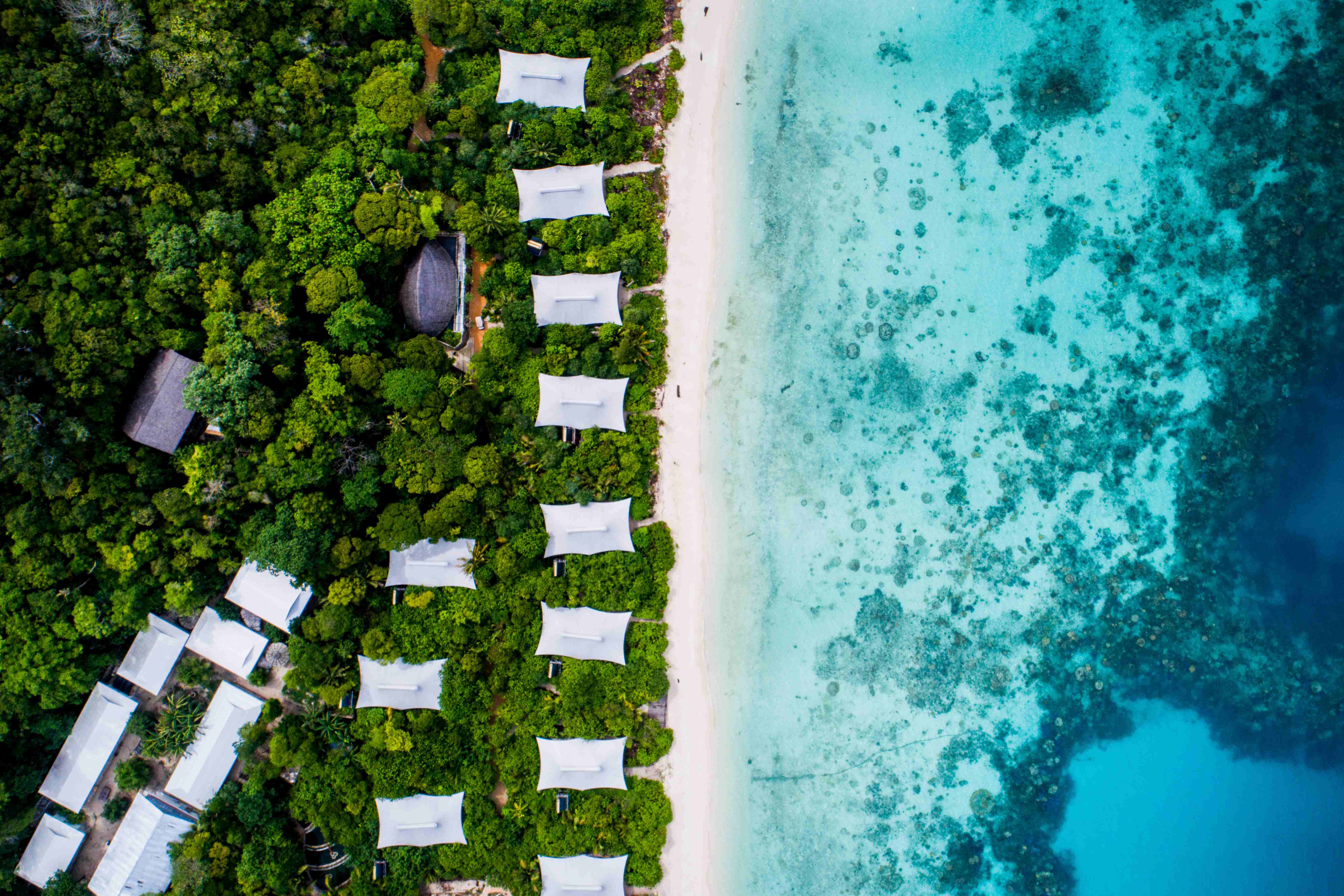 As we rowed, the screen underneath us scrolled. Flashes of dense forest-like corals soon appear. And other sub-aquatic creatures come into frame: A school of damselfish, some menacing-looking sea urchins, anemones and Nemos — all telecasted, in splendid technicolour, through our crystal-clear-bottom kayak.

Taking the term ‘livestream’ to a whole new level, this must-do water activity at Bawah Reserve needs no buffering time. Just paddle or stay idle and watch the underwater world below you go by. Even if the insides of the kayak take on puddles of water, it’s still the most spectacular screen found here — a theme-park-worthy four-dimensional experience at best. Because, aptly so, there isn’t a television set in any of the guest suites at Bawah Reserve to begin with.

But trust us, you don’t need Ultra HD LCD monitors or battery-powered tablets to keep you entertained at Bawah Reserve. Located 300km north-east of Singapore, this six-island, three-lagoon and reef-rimmed enclave is only accessible via seaplane, making it not only one of the most all-rounded, but also the most far-flung, private-island resorts in Indonesia. The nearest form of civilisation — an island called Kiabu, populated by just 20 Indonesian families — is a two-hour boat ride away. So when a thunderstorm took down Bawah’s telecommunication towers a few days before our arrival, cutting off WiFi and phone services, some guests could still make the tolerable journey to Kiabu to make important business calls and reply urgent emails. Others were just happy to stay on Bawah, mingling over barbecue on the beach prepared spontaneously by the superb island team.

When we landed, on the vast lagoon-turned-runway, all forms of communication seemed to be up and running again. Yet, we initially dreamt of days where we could quit tech and instead, connect to the beauty of the island’s nature, people and filter-free everything. With Bawah’s ongoing in-room-only WiFi policy though, we could still sort of do that.

And the first stop on our digital detox? The island’s mesmerising Aura spa. Though it wasn’t exactly planned. Just like a page out of a handbook that outlines ‘intuitive service’, a gentleman rings us up a few minutes after we’ve checked into our oceanfront villa to ask, “Would you like a 30-minute foot massage?”. And honestly, who would say no to that?

Bawah’s all-inclusive package means you get pretty much daily spa treatments anyway. So here we are, comfortably seated on the roof terrace of the spa’s bamboo bungalow, as our therapists apply pressure to each toe and tendon. Everything else is therapy for the eyes and ears: Rustling treetops and chirping birds become incidental music — a nice break from the typical chime-heavy digitised soundtracks on loop at most establishments.

SEE ALSO: 3 resorts in Asia to rejuvenate at

Other activities worth pursuing that’ll force you to stop Insta-Storying everything is to get under the water. Follow dive masters Didi and Andi Pribadi on everyday snorkelling or diving tours at the atoll’s various reefs. With Didi’s expert eyes, we catch a glimpse of a resting round ribbontail ray and the oddball Bumphead Parrotfish along the east coast of Bawah Island.

With six islands totalling the Reserve, which Chief Operating Officer Paul Robinson proudly exclaims to be a marine conservation area, thus “somewhat equivalent to a game reserve”, Bawah Island is the largest and most developed. Yet, the main-island’s natural beauty is given priority with the 35 eco-designed suites only built on its south-side, leaving Bawah’s primary forests never cut or burnt. This allows you to hike into virgin terrestrial charm, culminating with a 150m rocky peak with views that’ll be worth the clammy journey. The only blue screen you’d be seeing here is that of the sea and sky— in multiple hues too. At this vantage point, admire also the tinier, uninhabited islands of the Reserve: Sanggah, Elang and Muerba, to name a few.

Our top-notch Bawah T-shirt-clad butlers, Rini and Egna, even arranged a private picnic the next afternoon on one of the many deserted beaches of Sanggah. When we arrived, cushioned seats were already set up with bright-orange parasols, fried rice in jars, fresh fruits, drinks, slices of chocolate cake, and sunscreen. But it would seem the beach wasn’t so isolated after all. We had company — dozens of hermit crabs. And these decapod crustaceans are in the middle of an epic property war, fighting each other for the most pristine of shells to call home. We couldn’t help but narrate the entire episode, channeling our inner Attenborough into every twist and turn of the unscripted story.

At day’s end, spent from sun, stimuli and storytelling, we draw down the power-controlled curtains of our glamp-worthy hut and are comfortably cocooned in the mosquito net-robed bed as the rhythmic crashes of waves lull us to deep sleep.