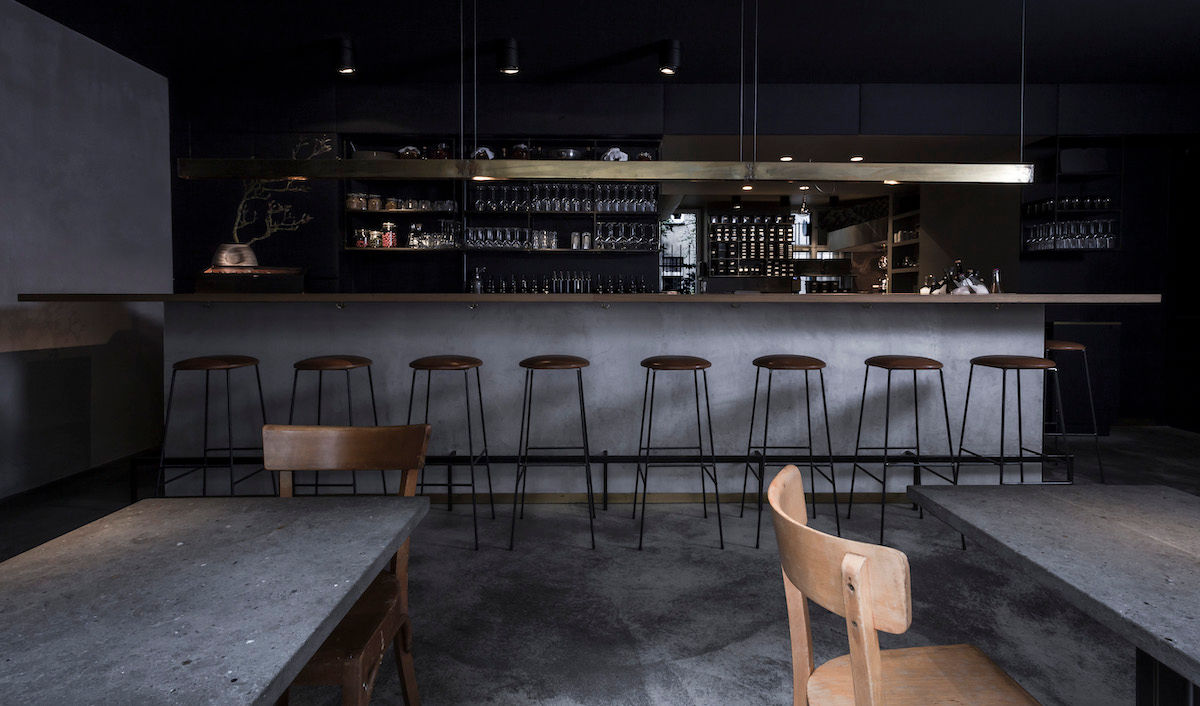 Travel
Where to eat and stay in Berlin: Restaurants and hotels to book in Germany’s capital city
Share
Next article

In Berlin, Germany’s multi-cultural capital city with a colourful past, a culinary institution can take the form of a century-old chocolatier or a three-year-old Levantine restaurant. Mavis Teo discovers its old and new cuisine.

Berlin is well known for its storied history. It was the seat of the Prussian empire, the headquarters of Hitler’s Third Reich, the epicentre of WWII crimes, and the very place where the city governments and families were split during the Cold War years. Since the Berlin Wall came down in 1989, the capital city transformed itself into a hotbed for creatives and anyone seeking a fresh start. Beyond its progressive art and design scene, its culinary offerings also reflect its multiple cultural influences and a thirst for the new and exciting. You can find anything here – from 100-year-old artisanal butcheries to innovative dessert restaurants.

Berliners love their bonbons, especially when they come with a legacy. Locals with a sweet tooth are divided between Rausch and Sawade – two of the city’s most famous chocolatiers. Rausch Schokoladenhaus was formed from the merger of two brands, Rausch and Fassbender, in 1999. The latter was founded in 1863 while the first Rausch shop was opened in 1918. While its offerings from single origin chocolates to pralines lean towards mass market, its flagship location is prime. A spot by the window on the second floor of the cafe that serves a velvety hot chocolate and a delectable array of confectioneries is much coveted, especially for the views of the beautiful Gendarmenmarkt, the city’s most magnificent square. While Sawade was founded in 1880, a husband-and-wife team bought it over in 2013. They overhauled and refined the brand design and layouts of its various stores while keeping the focus on fine handmade pralines – which Sawade is famous for.

A more famous gourmet speciality of the Germans is, of course, sausages. Marcus Benser gave up a career in banking to run a butchery that has been operating in the historic Neukölln area since 1902. Since taking over the reins and renaming the business Blutwurstmanufaktur in 1996, Benser has won accolades including the top prize for producing the best blood sausage in Europe from the Confrérie des Chevaliers du Goûte Boudin, a very prestigious gourmet organisation in France. Benser, who also hails from a family of butchers, was even named “Knight of the Blood Sausage” by the order. Although Benser has an online presence and supplies through other gourmet grocers, customers still drop by the shop. On any given day, expect to see both ladies who lunch and working men coming for anything from a few slices of ham, a string of blood sausages or any of the bottled condiments that range from blood sausage spread for sandwiches to goose fat for crispy roasted potatoes.

Berliners’ affection for Mampe, one of the oldest schnapps makers in the city, is so great that many chipped in to save the brand when an appeal for crowdfunding was made at the start of Covid-19 (and the subsequent lockdown). Evidence of that can be seen in the form of donor plaques on the wall of its bar above its workshop-retail store. Mampe was born 120 years ago when a physician came up with a formula for “bitter drops” as a remedy against a cholera outbreak. This gave rise to a household brand, many more formulas, and even watering holes including the famous Gute Stube (Living Room), which opened in 1917 and was popular with artists and intellectuals. Mampe even did the first football club sponsorship in the country. Synonymous with the brand is its white elephant logo, to which many Berlin bartenders pay tribute to in the form of a tattoo they wear. To taste Mampe’s iconic schnapps, Halb & Halb (half bitter drops and half bitter orange liqueur) that was created in 1894, pop into any self-respecting pub. To learn more, sign up for any of the brand’s events on its website or buy a ticket for a tour and tasting at Eventbrite.

Drinking goes hand in hand with dancing. And the most venerated dance hall in the city is the Clärchens Ballhaus. Founded in 1913 as a ballroom hall for high society, Clärchens has lived through all of Berlin’s historic moments in the 20th century: the World Wars, the division of Berlin, the fall of the Wall and the gentrification of the Mitte neighbourhood where Cl rchens is located. Clärchens has recently reopened following major renovations. While the dance classes are on hold due to the pandemic, the bar and restaurant are still open. Channelling old-world charm, this institution is worth a visit for at least a peek at its famous mirrored dance hall.

At SO/Berlin Das Stue, you would find a modern mecca of drinks within the heritage building that houses the hotel. The 1930s Modernist building was the former home of the Danish embassy in Berlin, and built by Johann Emil Schaudt, who was behind Berlin’s most beloved department store KaDeWe. For the swanky interiors, Patricia Urquiola used her signature palette of pop-up colours mustard and rust contrasted with sleek greys. The similarly furnished Stue Bar still draws in tastemakers and trendsetters across all ages who flock there for the intoxicating negronis.

And since we have veered into hotels, two are highly recommended to those who love sumptuous accommodation as much as they do good food. Although opened only from 2004 (taking over the premises of Four Seasons Berlin), the Regent Berlin has grown to become part of the beautiful and historic landscape that Gendarmenmarkt is in. Tip: Check into any of the corner suites for spectacular views  f the square. And the hotel maintains its role as a guardian of time-honoured traditions with aplomb. Given the close relations between Prussia and England, afternoon tea is a serious affair at the Charlotte & Fritz and gets booked up very quickly. If scones with clotted cream are not your cup of tea, the best of regional German cuisine can be found here as well. Try a more upmarket version of the currywurst, Berlin’s most famous street food of sausages and fried potato chunks drenched with curry ketchup.

Known as one of the first to take a gamble on the newly redeveloped Potsdamer Platz, which was slated to be Berlin’s new financial and administrative centre in the wake of the fall of the Berlin Wall, The Mandala Hotel (unrelated to the Mandala Group in Asia) has earned itself a place in both the locals’ hearts and stomachs. At a time when the pandemic has caused city hotels to receive much fewer guests, the in-hotel two-Michelin-starred Facil is still getting many reservations. Under culinary director Michael Kempf, the kitchen turned out delicately flavoured dishes, such as a cold-water fi sh called char from nearby Brandenburg for my lunch. My dessert whipped up by head pastry chef Thomas Yoshida was an edible garden fantasy of real mushrooms, raspberry and pistachio sponge with Persian figs – and worth every calorie. At the breakfast buffet, I was impressed by the amount of thought that went into every item, including the fluffiest-ever croissants – all of which are chosen by one of the owners, Lutz Hesse, who has also designed every one of the top suites so differently that the hotel is worthy to be a Design Hotel member. My top pick for a stay is the 2,153 sq ft Top of the Town Penthouse, which is minimalist yet detail-oriented in the choice of furnishings.

Pioneers in vegetarian haute cuisine, founder Heinz Gindullis and head chef Stephan Hentschel persevered despite the naysayers who were sceptical that their concept would work when they opened Cookies Cream in 2007. In 2018, their efforts were validated when the restaurant was awarded its first Michelin star. Finding the restaurant is a challenge, as the entrance is tucked inside a dark alley between two buildings that you will miss easily. But the effort expended is worth it. Food here is seasonal and satisfying; and the service warm and heartfelt. Throughout The Magnificient Seven menu, I didn’t miss meat once as I devoured the generous portions of onsen egg with seaweed caviar and sour cream, and cabbage with citrus flavours, celery créme and pine nuts.

Dessert restaurant CODA has not one, but two, Michelin stars for its offerings which owner-chef René Frank describes as dessert in preparations but may not taste like conventional sweet treats. Some are savoury and wholesome enough for him to design four- and seven-course menus that don’t feel like an overkill. I knew I was in for a memorable night when the staff gave me air-dried yellow beet gummy bears to start. They were a curious mix of sweet, salty and slightly tart – so good I wished I could buy a bottle of them. If I had come expecting to overdose on sugar, I was wrong. The caviar ice cream was salty, briny and creamy at the same time, and particularly memorable.

For something exotic, how about fine Levantine cuisine? At 26 years old in 2011, a young Gal Ben Moshe from Israel decided that Berlin would be the city where he would stake his future and open his own restaurant with the US$30,000 he had to his name. By 2018, he had launched Prism (after closing the first) with the objective to present an elevated form of Levantine cuisine, which is a departure from the traditional hearty fare that most people associate it with. To this end, Moshe combines Asian and Middle Eastern ingredients with European cooking techniques to produce flavours that are both pronounced and nuanced. Three years on, Prism has been awarded one Michelin star for a second year. While Levantine cooking is not uncommon in Berlin, Moshe’s style is certainly in a league of its own. A dish of lightly chargrilled scallop was given a sharp burst of acidity from finger lime, complementing the umami freshness of the mollusc. Moshe’s rendition of the popular seared foie gras with Jerusalem artichoke and coffee was also the most elegant I have ever tasted.

Having visited many key historical sights that bore testimony to the terrors committed by the Third Reich towards the city’s Jewish inhabitants of that time, I felt touched by Moshe’s cooking, and that he would be so brave to relocate to Berlin to share the beauty of his people’s cuisine. The fostering of greater culture understanding aside, Prism’s food is simply very good and well worth an advance reservation.

This story first appeared on the January 2022 issue of Prestige Singapore.

Mavis Teo is an editor-at-large at Prestige Singapore where she focuses on travel, arts and culture, and personality profiles. A regular contributor to South China Morning Post, DestinAsian, The Straits Times and The Star, the adrenaline junkie and nature lover also writes on equestrianism, polo, scuba diving and sustainability.