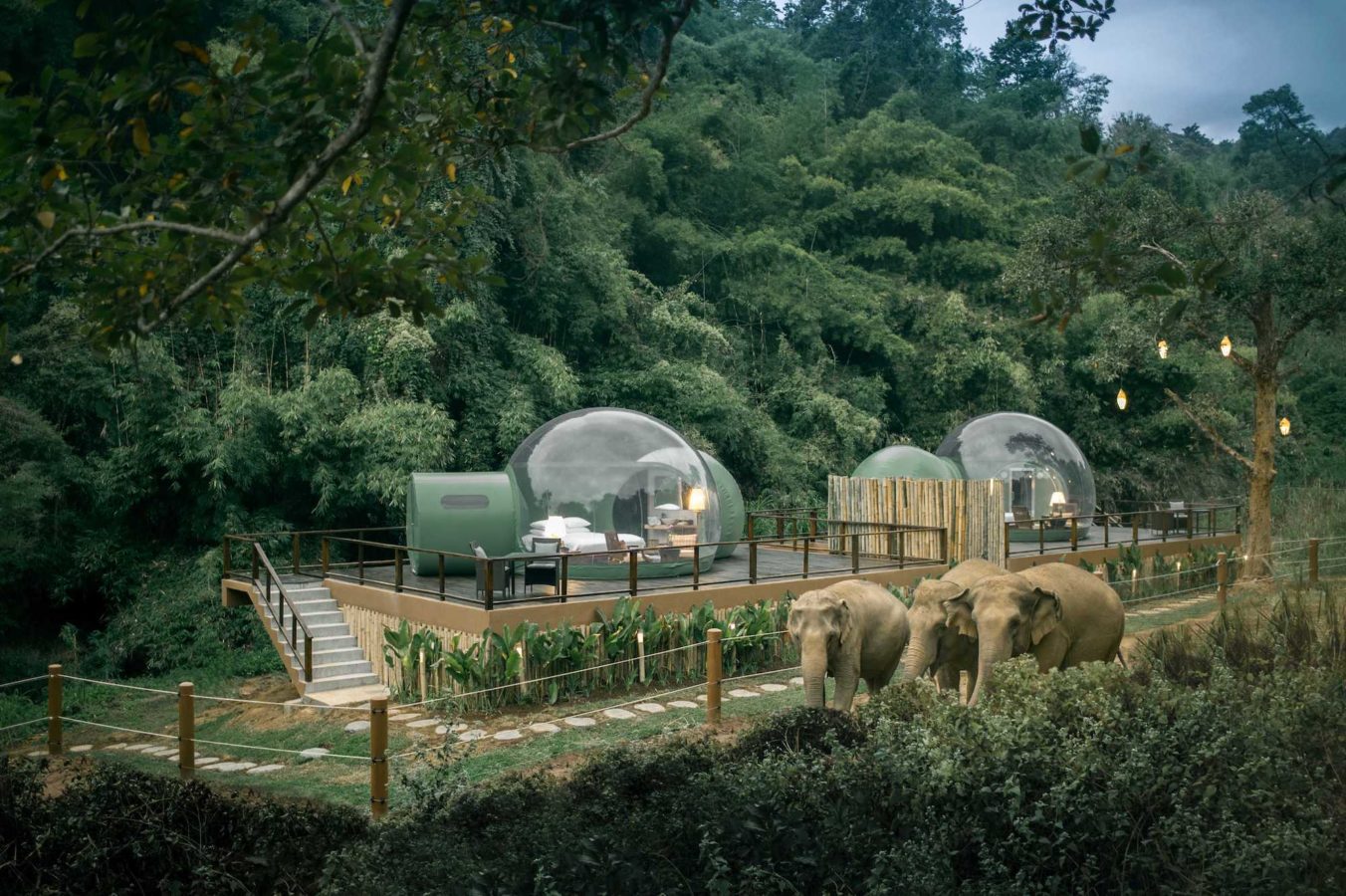 Reena Hallberg heads up north to Chiang Rai for a once-in-a-lifetime opportunity to spend the night with Thailand’s most majestic elephants at the Anantara Golden Triangle Elephant Camp & Resort.

Imagine: you’re cocooned in nature under a canopy of stars, fireflies illuminating your surroundings, the sounds from nocturnal critters provide a calming background score and your companions are one of the world’s most magnificent creatures, elephants.

Instead of feeling out of place in their natural habitat, I am completely at one with them and the environment – all while basking in the lap of luxury in my very own “jungle bubble”. These transparent structures are ensconced within lush landscapes and perched on elevated wooden decks that ensure unobstructed views of the magnificent surroundings and the majestic mammals that live there. In case you’re wondering, I am not on a safari in the heart of Africa, but right here in Thailand at the Anantara Golden Triangle Elephant Camp & Resort in Chiang Rai. The resort’s two identical domed suites sit on the fringe of the Kingdom’s tranquil northern jungle, which is both home to these peaceful pachyderms and the site of a luxurious five-star retreat.

Soon, it’s dinner time for me and my new elephant friends. While mine arrives in a refined picnic basket, theirs is served in heaps, stacked by their mahouts. For the next few hours, as I sat stargazing on my private deck, my three friendly companions would each take turns coming close to my quarters, curious of their new neighbour (after all I am on their turf). This experience is immersive, and as close-to-nature as it gets, since the elephants are merely a few metres away – at a safe and comfortable distance bordered with a wired fence.

I sat back and watched the elephants at play, rubbing their mud-covered backs against large trees, and occasionally ripping out a lower hanging branch and tossing it among themselves. But for the better part of the evening they were almost always eating sugarcane, which have been strategically placed within a short distance of the bubbles.

The overnight stay in this jungle bubble is part of an additional activity offered by the resort, which means guests staying here just need to pack light for their stay, and are able to leave the rest of their luggage back in their suite at the hotel, which is what I did.

Earlier that day, just before sunset, I was driven in an open-air 4×4 jeep through the resort, down a dirt road and taken to the area where the bubbles were, just a few minutes from the main property. From there, I took a short walk through lush rice paddies before finally settling into my bubble.

The two transparent domes sit side by side, separated by bamboo partitions, thus allowing their respective guests complete privacy. Luckily, for that particular evening I was on my own which made the experience even more special. After dinner, which consisted of a well-curated selection of bites I had pre-selected the day before, I retreated into my domed domicile.

Despite its seemingly compact size of 22sqm, the space is well designed and furnished with a plush king-size bed – with wrap-around curtains – a seating area with a coffee table and chairs, as well as a non-transparent en suite. Amenities include all the requisite luxury comforts, such as fluffy bathrobes and slippers, a well-stocked minibar, in-room dining service and exquisite bath products.

These pressurised suites were custom designed by Eye In The Sky, making use of a high-tech polyester fabric that can withstand unpredictable tropical weather. To combat high levels of humidity in the summer, and lower temperatures during the cooler months, the bubbles are fitted with air conditioning, heaters and a dehumidifier. It was also quite interesting to find a lack of television within the accommodation, which alluded to the fact that the elephants were the real stars here.

Later in the evening the clouds parted and the moon came into full view, shining directly above me; illuminating my little bubble and making the entire experience absolutely surreal. If the bright lights or the sounds of the snoring elephants get to be too much – and they do snore rather loudly – eye masks and ear plugs are just a reach away, to make your sleep more comfortable. I, however, required neither, and was able to drift off comfortably in a deep slumber in what I consider was the crescendo of my stay here.

The next morning, I woke at the crack of dawn to the loud chomping of the elephants as they dined on a fresh supply of sugarcane. They are early risers and only get in around four to six hours of sleep per night in their natural habitat – just one of the many elephant-related facts I picked up during my stay there.

Soon after, I had an opportunity to get even closer to them on the Walking with Giants tour. I trailed on foot, following these magnificent creatures as they made their way down dusty trails, through the jungle, and into the river where they bathed and splashed about with one another. We were accompanied by their mahouts, their vet and a coterie of representatives from Anantara’s non-profit Golden Triangle Asian Elephant Foundation (GTAEF), who along the route gave me some insight into the work that the foundation has been doing since its inception in 2006.

At the time of my visit, the GTAEF was caring for a little over two dozen elephants and their mahouts, as well as their families. Most of the elephants in their care are rescued from the streets of Bangkok, where they had been made to beg for money from tourists in exchange for photographs, while others arrive here from tourist trekking camps and logging sites from around the country. The organisation, through support from its partner hotels under Minor Group, Four Seasons Tented Camp Golden Triangle, as well as donations from individuals, supports and rehabilitates these animals, many of whom have led hard lives prior to being rescued. The GTAEF is also involved in numerous conservation projects and various children’s charities throughout Thailand, such as the Thai Elephant-Assisted Therapy Project, which puts autistic children in an occupational therapy programme with Thai elephants.

For my second night, I was relocated to a spacious suite within the resort’s residential wing. Perched on a hill, these low- rise buildings contain three distinct types of suites, all of which come with spectacular views of the Golden Triangle region – the point where the three countries of Thailand, Laos and Myanmar meet. My hilltop hideaway is designed in traditional Thai style, with teak furnishings and indigenous artworks, as well as with all modern comforts that are considered hallmarks of Anantara. An especially noteworthy feature of my suite was the expansive double balcony, replete with large Thai-style daybeds that were ideal for taking in the views of the rice paddies and valleys below, and the convergence of the mighty Mekong and Ruak rivers. This scene is especially serene in the morning when the sun rises through the mist between the mountain ranges of Laos.

On the F&B front, the resort’s three exceptional outlets, Sala Mae Nam, Baan Dhalia, and Elephant Bar and Opium Terrace, offer a variety of cuisine that ranges from Thai comfort food to Italian, and then some. Of course, it would be remiss of me to be up north and not to try delicious Lanna offerings, which is in itself a highlight of this region. A confluence of history, culture and geography have contributed greatly to the unique salty and sour flavours that define Lanna cuisine, which takes its name after the Lanna Kingdom. The menu at Sala Mae Nam features such classic staple dishes as Khao Soi (crispy egg noodles in a coconut cream based fiery curry with meat), Gaeng Hang Lay (an aromatic curry with braised pork), Nam Phrik (a relish made from dried chillies, minced pork, tomato, garlic and onion), and several others.

When not spending time walking the grounds with elephants, or getting pampered with bespoke spa treatments, guests can partake in various leisurely pursuits such as day trips to the neighbouring country of Myanmar and the Kingdom of Laos, longtail boat journeys through the Mekong, and even a two-night luxury cruise between the Golden Triangle and Luang Prabang in Laos, aboard a private thatched-roof rice barge. For me personally, a highlight here was an exhilarating ride I took around the countryside in a Royal Enfield Sidecar. Led by experienced hotel staff, I spent a beautiful afternoon touring the region, visiting Lanna temples and nearby villages in a sidecar attached to an Enfield Classic 500. A truly stylish way to see the area! 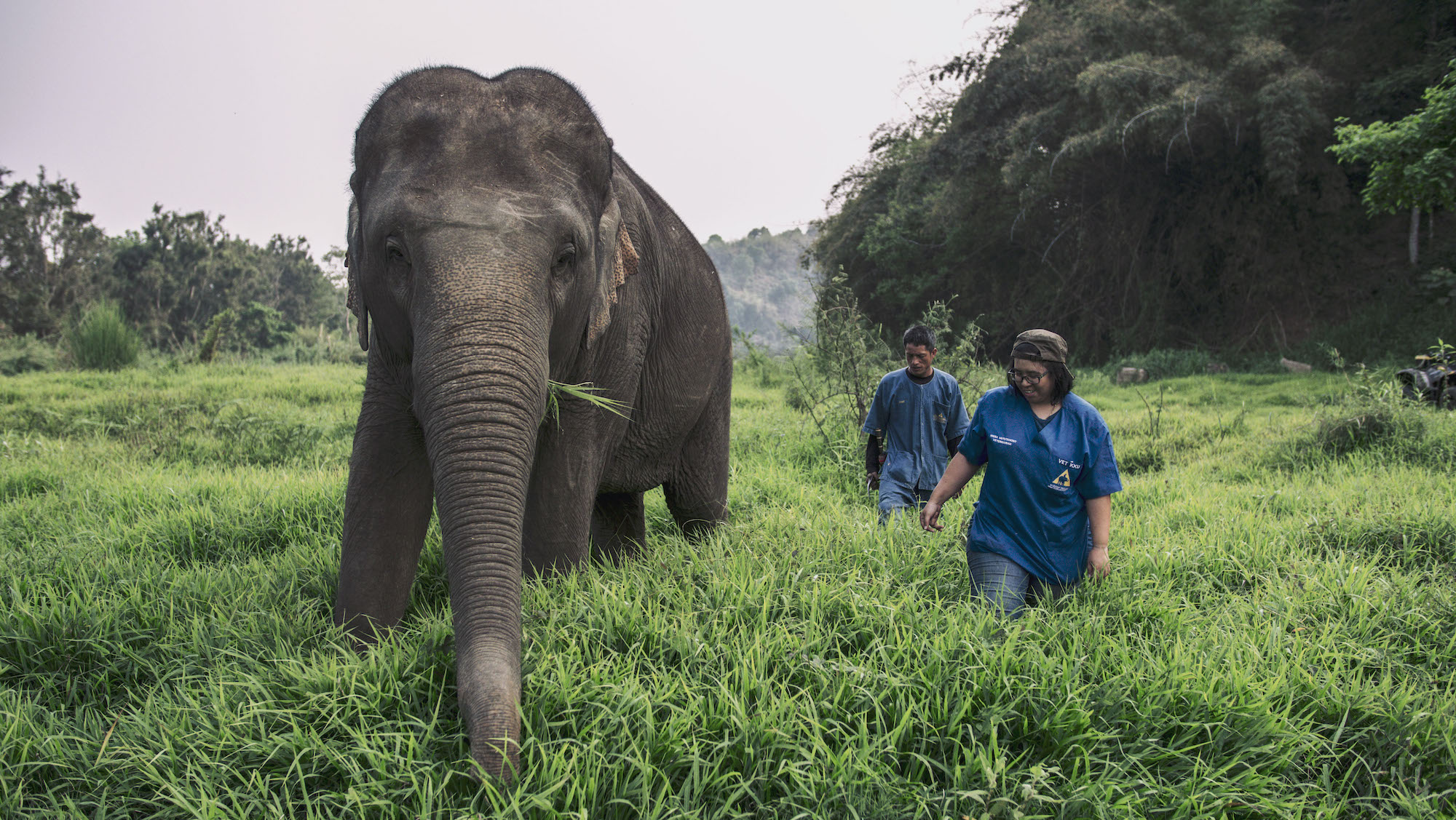 During these trying times, where tourism is at an all-time low, the elephants and their mahouts at the Golden Triangle Asian Elephant Foundation (GTAEF) require support from individuals and organisations in order to survive. To donate or sponsor an elephant please visit helpingelephants.org.

Sign up to get the latest luxury and lifestyle news delivered to your inbox.
Reena Hallberg
travel

Glamping On The Golden Triangle