8 sustainable hotels around the world for conscious and mindful travel

Here is our handpicked list of eight sustainable hotels around the world for your next conscious travel trip.

Spread over 34 acres, Château Saint-Martin & Spa offers a tempting array of experiences, including art exhibitions, food and wine tastings, and award-winning spa services—besides panoramic views of the French Riviera from the hilltops of Vence. It is a partner of the League for the Protection of Birds (LPO) and works towards protecting endangered local species and safeguarding the shrike, an emblematic bird of the region. 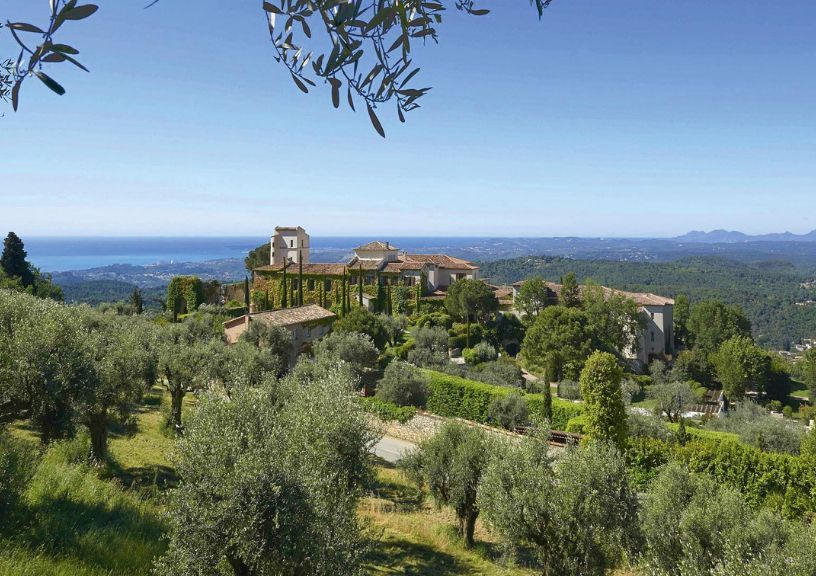 Birdhouses find a home here, as does an insect hotel in its garden where bees seek refuge while also producing fragrant honey. Château Saint-Martin & Spa keeps waste to a minimum, ensuring responsible waste conversion and reduction. The hotel also provides a giving bag to its guests, wherein they can donate their unwanted clothing to a charity. 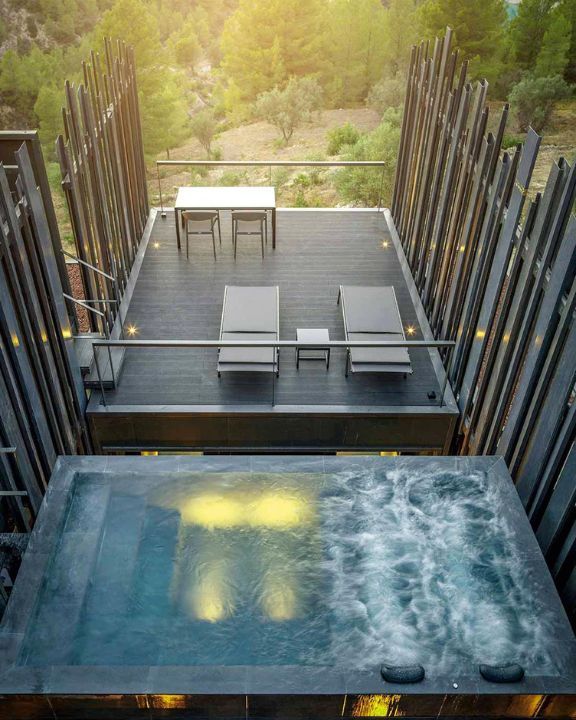 An adults-only property, VIVOOD Landscape Hotel houses 25 independent rooms and 10 exclusive villas that pair views of the Guadalest Valley with a private heated pool. Its architecture is designed to subtly fit into the mountainous terrain, rather than disrupting it. The sustainable hotel can boast of conserving and restoring the environment, while also assuring guest privacy, having an environment-friendly foundation, and being free of light pollution. In fact, Spain as a whole takes pride in minimising light pollution, with a star-studded sky available to gaze at in Sierra Sur district, Sierra Morena mountains, and Montsec, to name a few. Spain also houses 16 National Parks, four of which are UNESCO World Heritage Sites; 15 geoparks; 30 natural spaces accredited by the European Charter for Sustainable Tourism; and over 53 spaces with abundant biodiversity. 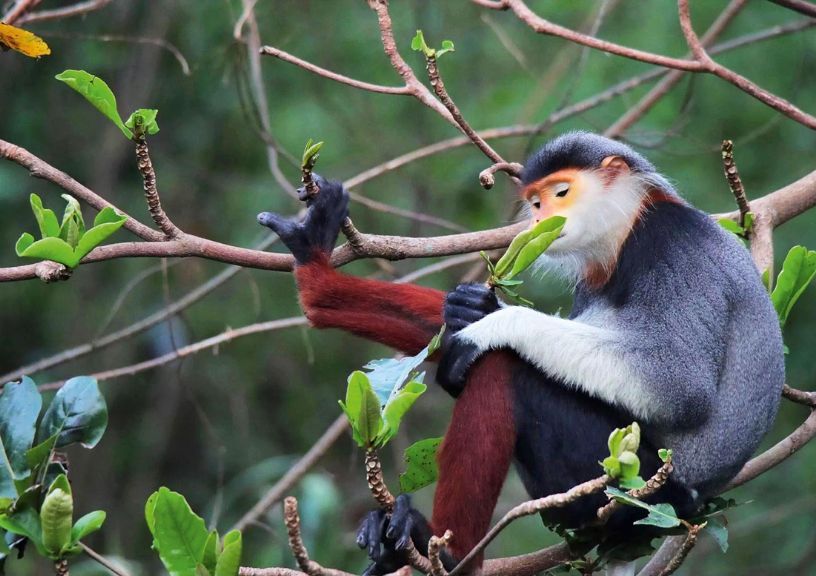 Located within the Son Tra Mountain Nature Reserve, which is home to several critically endangered species such as the red-shanked douc langur, this resort claims to be one of the few resorts on the planet to have a full-time staff zoologist, Anthony Barker. Aside from overseeing the resort’s green initiatives—eliminating pollutants, preventing poaching, invasive species management, conserving endangered species—Barker also offers complimentary workshops to guests. With over 6,200 acres of forest housing over 1,000 plant species, hundreds of birds, butterflies, and dozens of reptiles and mammals, Barker’s workshops deep-dive into the natural world. The Banyan Tree Hike winds through a coastline to end at a majestic 800-year-old banyan tree; Basket Boating dives into the art of making traditional Vietnamese basket boats; and the Wildlife Workshop unravels the world of indigenous flora and fauna, especially the illustrious red-shanked douc langur. 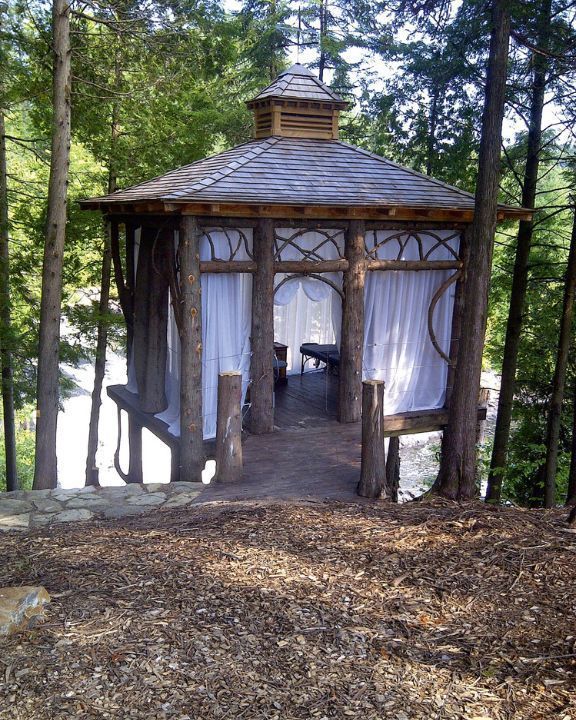 The aptly named Le Baluchon Éco-villégiature (French for eco-resort) in Saint-Paulin, Canada, takes eco- consciousness very seriously. Take its recycling centre, for instance, which gives new life to scrap glass, metal, cardboard, and paper in the form of notepads, napkins, and reusable bags. Not only has the smoke-free property ditched burners for induction warmers at the organic Au Bout Du Monde Eco-cafe, but it has also installed gas fireplaces in all the rooms. The amenities boast of being energy star appliances; the SPA houses environment-friendly ingredients for treatments; and all the cosmetics are organic and locally produced. Since Le Baluchon is located on a former sawmill, extensive reforestation activities have also been underway, including a pilot project to replant hardwoods in collaboration with Université Laval. Similar investments have also been made towards a reed purifier for Rivière du Loup, and an energy manager to conserve electricity. 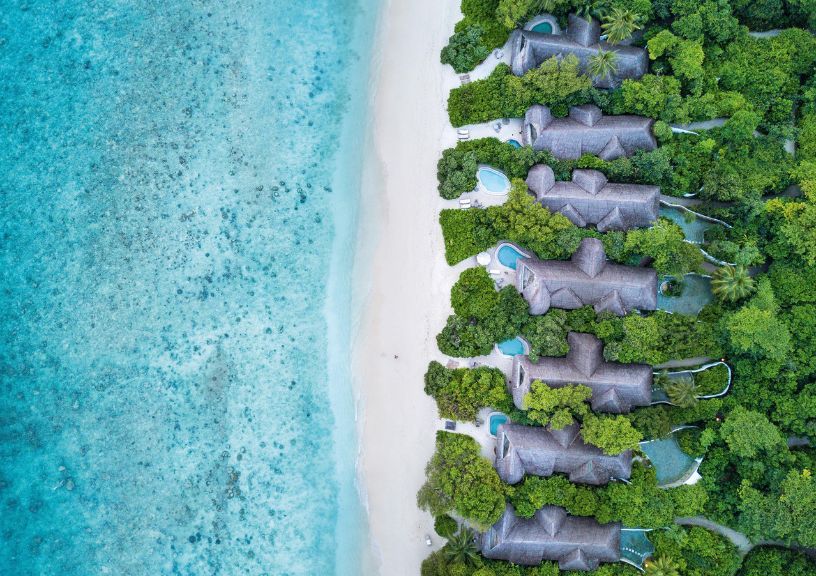 The pioneer of sustainable luxury hotels in the Maldives, Soneva operates two impressive properties—Soneva Fushi and Soneva Jani—and an indulgent 23-metre yacht, Soneva in Aqua, in the archipelago. They’re proponents of barefoot luxury and the slow life, so guests are encouraged to give up their footwear on arrival. It’s called the ‘no news, no shoes’ philosophy.

The villas at Soneva Fushi are built and designed sustainably to accommodate the vegetation of the island and make it part of the stay. But the use of tropical rainforest timber has been consciously avoided. In 2008, Soneva started measuring its carbon footprint and took some drastic measures thereon: from banning all branded water on the island, to establishing the first solar farm in the Maldives and an Eco Centre with a waste-to-wealth manager, charging a small carbon levy on all stays—which has funded a windmill in India, five lakh tress in Thailand, and cook stoves that lead to 50 per cent reduction in firewood usage and 60 per cent reduction in CO2 emissions in Darfur and Myanmar. The Eco Centre recycles 90 per cent of the island’s waste, from all parts of coconuts to certain plastics and aluminium cans. In 2021, Soneva Fushi came up with an ingenious solution for mosquitoes, replacing toxic sprays with natural traps that exploited insect behaviour.

The Soneva Art and Glass studio recycles all of the island’s waste glass into not just utilitarian glass items like decanters and drinking glasses, but also beautiful pieces of glass art. Renowned global artists visit this centre, and glassblowing workshops are held for guests. The organic gardens at Soneva Fushi not only produce an abundance of greens, which are used in the kitchens, but they also offer guests unique dining experiences. The resort also sources its seafood responsibly with a no-no list that features Caspian Sea caviar and bluefin tuna. The hotel has reduced use of beef and dairy—big sources of greenhouse gas emissions—and is progressively making its menus healthier and more sustainable. The best part: none of this comes at the cost of luxury.

Give Back at Kisawa Sanctuary | Mozambique 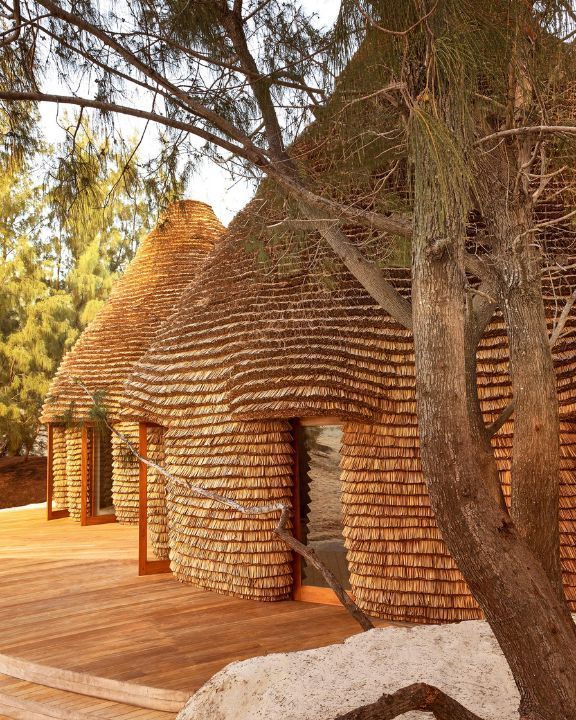 Located on the southern tip of Benguerra Island and spread across 300 hectares, Kisawa is a sanctuary of forest, beach, and sand dunes on the eastern coast of Africa. The WWF National Marine Park nearby is home to a rich and lesser-known subtropical ecosystem. Marrying tradition and innovation, the resort employed local artisans and patented 3D printing tech for its construction. Local weavers entwined grass into sliding door panels and baskets, artisans carved chairs and tables using local jambir and sambiri woods, and scrap from the sanctuary’s construction was used to make statues. The guest experiences range from scuba diving, to conservation and community building, bespoke dune glamping, and picnics. 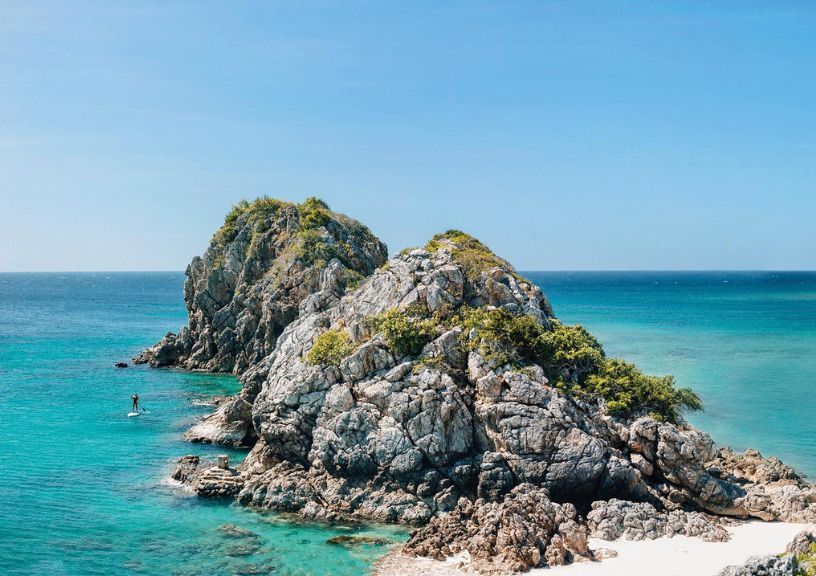 Located on Pamalican Island in the Cuyo Archipelago of northern Palawan, Amanpulo is a private island fringed with white-sand beaches and pristine reefs. It offers guests a nature-led experience with modern comforts and privacy, but it does a lot more than that for the destination. To counter the population surge of crown-of-thorns starfish that feed on hard coral, Amanpulo has implemented weekly reef monitoring to record sightings. Outbreaks are curbed by a team, which dives and collects the starfish from reefs, and relocates them—in partnership with dive centre concessionaire Crestamar. Green sea turtles and hawksbill turtles have always been welcome, but a 2021 sighting of an Olive Ridley turtle nest led the team to support the endangered species’ complete life cycle. This includes continuous monitoring, contributing to global data, and offering insights into behavioural patterns. Amanpulo has also contributed to building labs in the fields of engineering, food and beverage services, and housekeeping at the Technical-Vocational Education Manamoc. 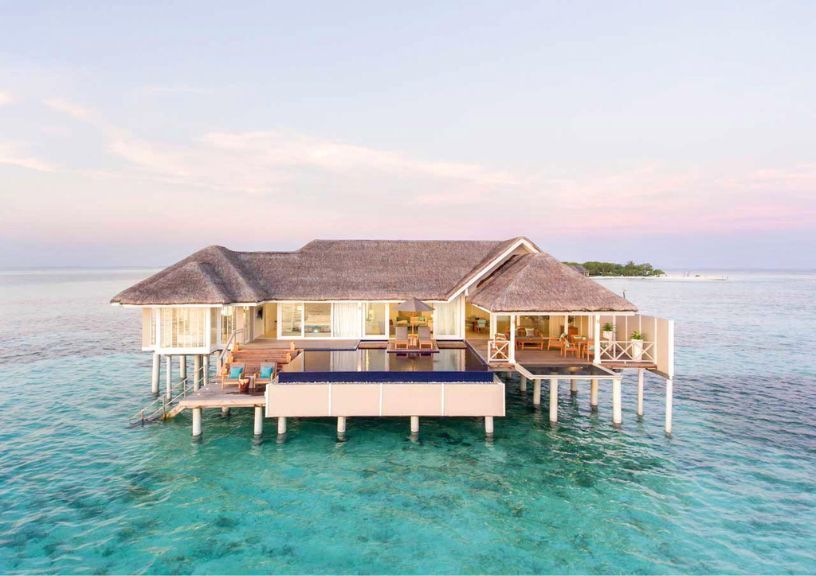 The first resort in the tropical country to be dubbed as a ‘vegan-friendly hotel’ by Vegan Welcome, LUX* South Ari Atoll has a Keen on Green menu that is available across all of its eight restaurants. Each of the sustainable delicacies served at this hotel is peppered with organic goodness. Home to the world’s largest floating solar platform at sea, the resort has also banned all forms of single-use plastic on its premises. It has planted corals with the in-house marine biologist; organised bicycles, island cruisers, and solar-powered shuttles to get around; and created a herb-and- vegetable patch to help the kitchens. The island resort has also set up its own water plant, which has saved about 8,10,000 plastic water bottles so far. Since the isle is in a Marine Protected Area and located close to 50 dive sites, you can participate in underwater excursions to snorkel beside manta rays, explore shipwrecks, or even help collect data on whale sharks!