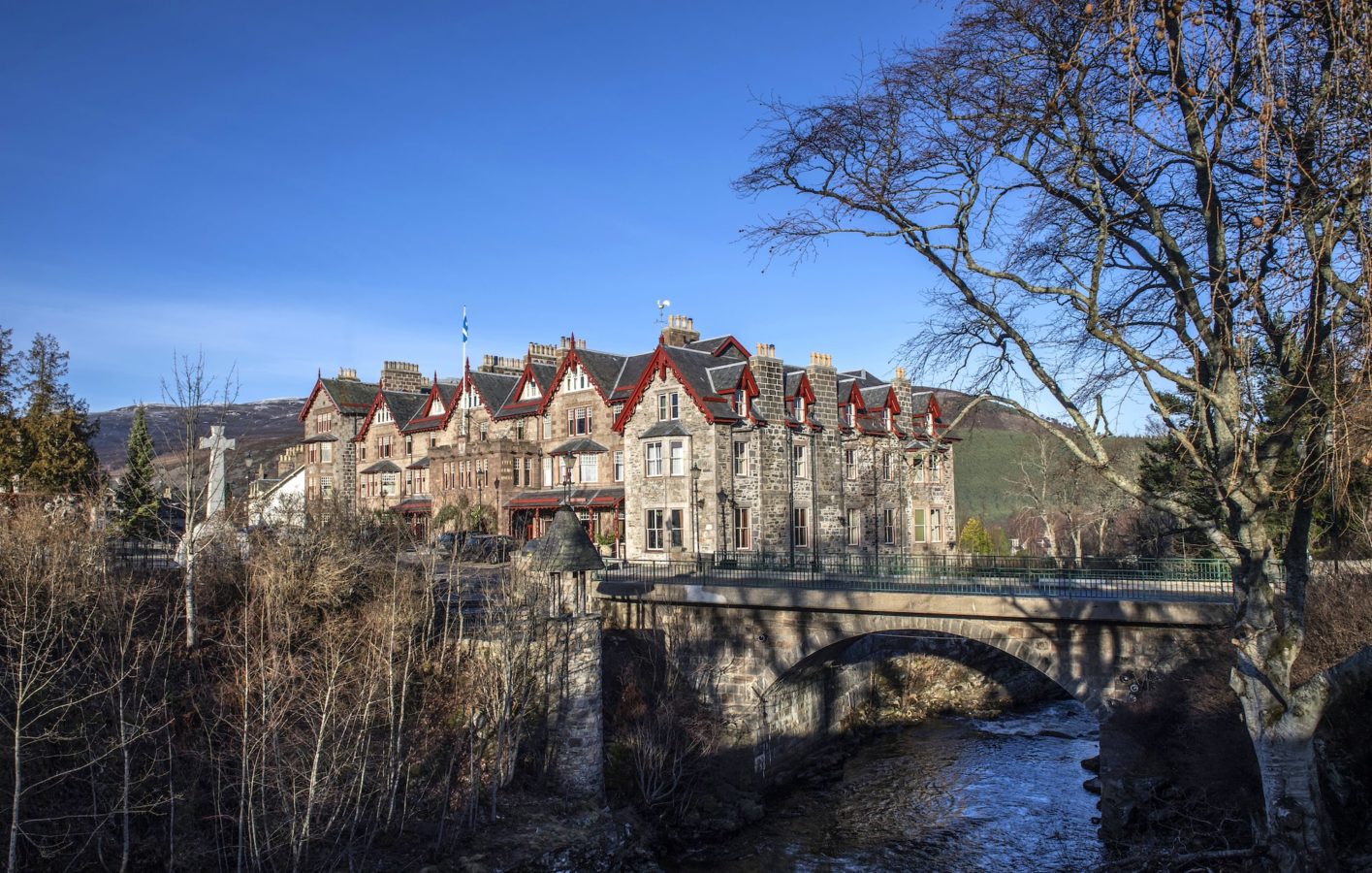 The Fife Arms: Live in visual splendour at this stunning hotel in Braemar, Scotland

Travel
The Fife Arms: Live in visual splendour at this stunning hotel in Braemar, Scotland
Share
Next article

Few hotels in the world induce aesthetic delirium quite like The Fife Arms in Braemar, Scotland, where visual diversions abound – so many and so various – it’s nigh on impossible to know which way to look.

There’s a Lucian Freud portrait and Mark Bradford’s Steinway pianola (self-playing piano) in the lobby. Then a Gerhard Richter in the dining room. Advance to the drawing room, and what looks like a Pablo Picasso on the right wall, or at least a copy, is the original Mousquetaire Assis (1967) and would fetch in excess of US$30 million (S$40.5 million) plus at auction; on an opposite wall hangs an innocuous pencil and watercolour of a stag’s head – by an enthusiastic amateur more commonly known as Queen Victoria.

Oh, and as your eyes ascend the staircase in this semi-baronial hall-meets-costume drama film set-meets-visual adventure playground, a neon orb composed of bagpipes and glass antlers cascades like a glistening exclamation mark from the ceiling above the banisters; Red Deer Chandelier, a commissioned piece by Los Angeles-based artist Richard Jackson. Thus, you could explore nothing else at The Fife but this space, surreal in a Giorgio de Chirico kind of way, safe in the knowledge that you’d appropriated Royalism, Cubism and Blade Runner-ism in the heady and iridescent blink and dash of an eyeliner.

And in Braemar, of all places. Yet to cultural nomads of The Fife (four years in the making following near bankruptcy) it’s little wonder given the stealthy resume of its Swiss power-couple owners, Iwan and Manuela Wirth, co-presidents of Zurich-based Hauser & Wirth art gallery. Britain’s Sunday Times declared The Fife its Hotel of the Year 2019. The Wirths, who live in the area, are leveraging art with food, hospitality, culture, community and environmental sustainability in a portfolio of niche projects: the Roth Bar & Grill and Durslade Farmhouse in Bruton, at Hauser & Wirth Somerset; The Bull Inn at Hardway in Bruton; Manuela restaurant at Hauser & Wirth Los Angeles; and now The Fife Arms in Braemar and the upcoming Hauser & Wirth Menorca on Isla del Rey.

The Swiss love Scotland,” Iwan Wirth says, “and among many things, we want the hotel to be a celebration of art and Scotland. And to share our belief in the power of art to move, inspire and transform lives.”

The couple says the acquisition was a natural given their familiarity with the place. “We have a home nearby and fell in love with Braemar and Royal Deeside instantly, so it wasn’t a difficult decision,” Iwan says. “We felt a responsibility to return The Fife Arms to its former glory and make it the heart of the community once again.”

Set in the wild, picturesque Cairngorms National Park, (home to four of the five highest peaks in the UK), Braemar is two hours’ drive from Aberdeen, and a mere cockstride from present-day monarch Her Majesty Queen Elizabeth II’s Balmoral holiday home (which Queen Victoria’s husband, Prince Albert, bought in 1852). Braemar hosts the annual Highland Games Gathering on the first Saturday of September, traditionally attended by the British royal family; it’s the only highland games with a royal patron.

Over and above the queenly neighbours, Iwan sees the property as the preserve of “slow travel”, almost like a home from home. The Fife’s interiors have been created by London-based Russell Sage Studio (The Goring, The Savoy), and throughout there’s a Scottish narrative – including bespoke tweed and tartan for ghillies and staff, which extends to the interiors in the fleet of Land Rovers. The property is suffused with local craftsmanship, from walls adorned with proprietary house tartan and tweed created by Araminta Campbell to grounds sculpted by trophy garden designer Jinny Blom.

And then there’s the sumptuous accommodation. The Fife boasts 46 bedrooms, each unique, from Royal and Victorian suites to Nature and Poetry rooms. These have been inspired by historic luminaries such as King Edward VII; Prince Charles Edward Stuart (aka the Young Pretender and Bonnie Prince Charlie); Prince Albert, Scottish poet Robert Burns, Robert Louis Stevenson (who wrote Treasure Island in Braemar) and Scottish botanist David Douglas.

But more than just seeing inside, The Fife is also about doing outside. The Wirths, dedicated hikers themselves, encourage guests to wander into the adjacent Highlands to hunt, stalk, bird, mountain bike, shoot and fish (the River Dee runs beside the hotel and the season runs from February to September), while in winter nearby Glenshee provides the best skiing in Scotland. There’s also golf; Braemar is home to Scotland’s wildest golf course where you’ll have ospreys, stags and red squirrels for company.

“We support a number of local sustainable initiatives, including the Atlantic Salmon Trust and the River Dee Trust,” says Iwan, who has a sustainability task force working on the property. “Where possible, our ingredients are sourced locally and we have our in-house forager who regularly takes guests out for foraging workshops.”

Meanwhile, back in The Fife, fashion happens. We saunter into a cosy Art Deco bar called Elsa’s, manned by head bartender Marco Fante. Elsa’s owes its provenance to the influence of Frances Farquharson, the London- based Harper’s Bazaar editor from the early 1930s to 1945, who moved to Braemar to marry Captain Alwyne Farquharson, owner of Braemar Castle and laird of Invercauld. Frances’s friends followed, among them the “elsational” fashion designer Elsa Schiaparelli, who would soon succumb to the beauty of Scottish textiles.

Schiaparelli wasn’t the first. That was Gabrielle Chanel, who indulged her romantic bounty on the Duke of Westminster at his estate in Scotland. Always angling for a trend, Chanel wore Scottish tweed for salmon-fishing outings with the Duke and Winston Churchill, and used the material along with cashmere in her collections – something the house continues today. Christian Dior was similarly inspired by the landscape and textiles and staged Highland fashion shows during the 1950s.

All of Braemar’s couture-y clout was leveraged last November at The Fife when a coterie of fashion purveyors, including designer Christopher Kane, Oriole Cullen, curator of Modern Textiles and Fashion at the V&A, and Justine Picardie, Harper’s Bazaar editor and author, gathered to discuss the pivotal role of Scottish textiles in the global fashion world. Would the Wirths ever aspire to staging a full-blown show at The Fife, we wondered? “We would love to do a fashion show in the future,” Iwan quips. “But our Fashion Weekend is part of a number of cultural events we host throughout the year, including music, interior design, food and sculpture.”

One libation we couldn’t leave Elsa’s without was Maman, an ode to artist Louise Bourgeois, who began using spiders as a central image in her art. (There’s a huge, looming Bourgeois Spider with legs for days adjacent in the courtyard, one of the first large-scale works from the notable 1994 series.)

So too the public bar at The Fife with local beers and whiskies complementing hearty Scottish dishes (haggis, neeps and tatties with Lochnagar whisky sauce, skirlie – similar to stuffing, made with pinhead oatmeal – and pie of the day with mash, cabbage and gravy).

The bar has always been at the social centre of the village and is now rechristened The Flying Stag. Iwan commissioned American artist James Prosek, recently seen at Hong Kong’s Asia Society Centre, to create the mascot – a union of a stag and the wings of a ptarmigan (a bird native to the Cairngorms’ highest peaks).

The Wirths also made an interesting discovery there. “We found some fascinating items including a time-capsule whisky bottle with the initials of soldiers and newspaper cuttings,” Iwan says, which inspired their own initiative with local schoolchildren. “They filled a box with their favourite sweet wrappers, games and letters and we put it under the floor of The Flying Stag,” he says.

For gannets and gourmands eager to get their traditional game on, see the Clunie Dining Room restaurant and its Clunie River Mural created by Argentine artist Guillermo Kuitca. Here one feasts on pheasant, venison and wood pigeon, with a reminder at the bottom of the menu: “Please be advised that game dishes may contain shot”.

There’s food prepared by the former chef of GoldenEye Resort (once Ian Fleming’s home) in the Caribbean and the ultra-stylish female sommelier Alex Zarkowska to complement the mise en scène.

Painted on the ceiling of the Drawing Room, Ancient Quartz by Zhang Enli is one of five site-specific works commissioned for The Fife. Zhang took inspiration from cross-sections of Scottish agates, whose deceptively simple exteriors conceal a dazzling array of colours and textures. The work is also reminiscent of Cairngorm crystals, we were told, distinguished by the lines that scurry across their surfaces.

“To the Summit” is The Fife Arms’ motto. For us, along with Chinese artist Zhang’s painted ceiling in the drawing room, it was tops.

Sign up to get the latest luxury and lifestyle news delivered to your inbox.
travel Scotland Hotels and Resorts
Stephen Short
travel

Como Hotels and Resorts is now in Tuscany, Italy

QUEEN OF THE QUAICH