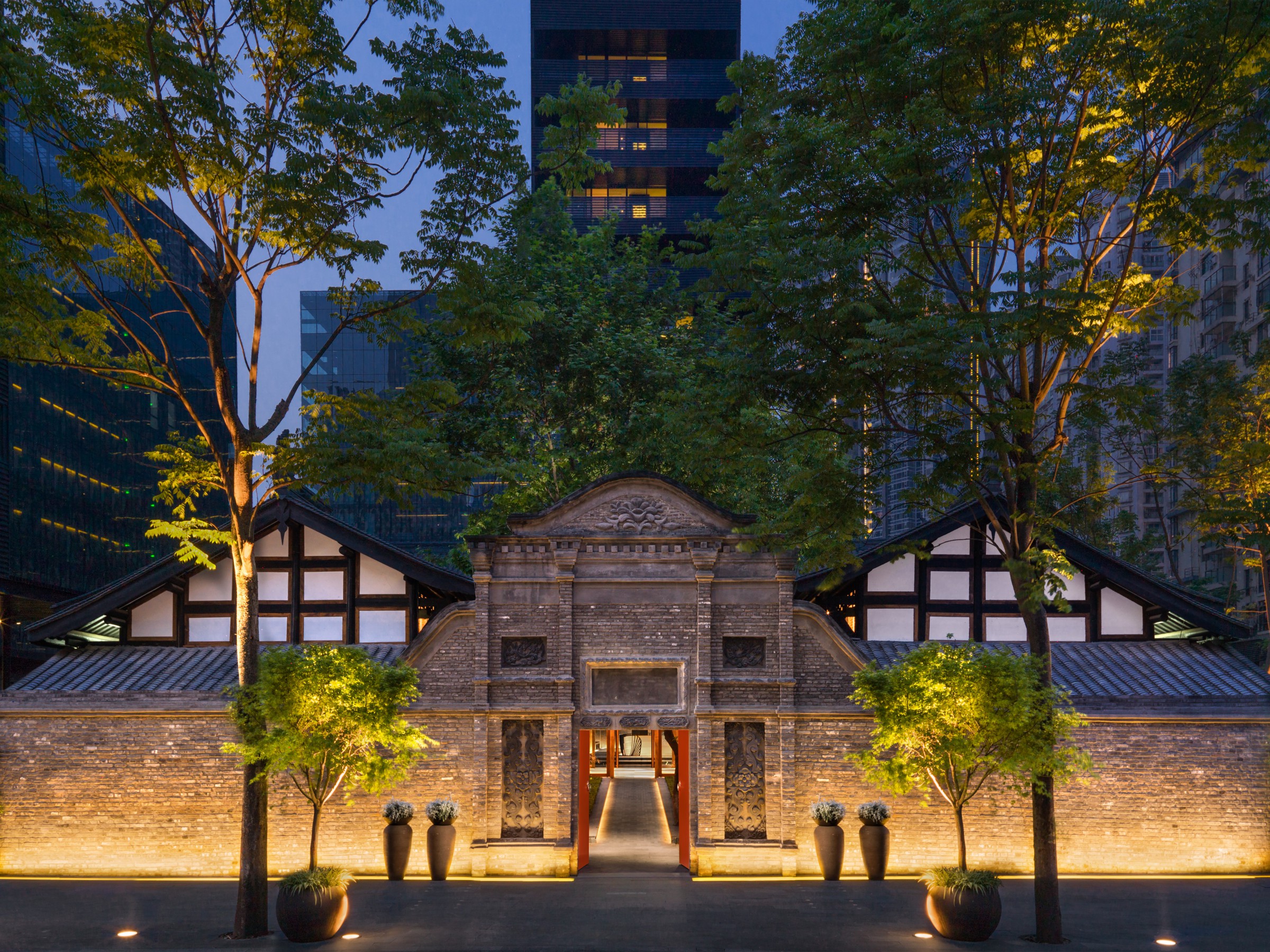 Atypical aesthetics have a lot to do with drawing people back to a hotel. So perhaps these hotel designs have looked to sacred temples, where people have been frequenting for decades, as a shoo-in way to connect and re-connect with guests. Who knows, you might actually experience seventh heaven here too, with great services and amenities to boot — a true temple of design and hospitality in their own right.

With a name like The Temple House, you’d expect temple-themed everything. Yes, it is inspired by its heritage setting — specifically the nearby 1,000-year-old Daci Temple, one of Chengdu’s most famous Buddhist temples — yet, the hotel incorporates plenty of modern touches that really bring out the Qing dynasty charm. Clever design elements such as freestanding minimalist furniture and a contemporary art gallery are juxtaposed with three-dimensional woven stone walls that look similar to the traditional architecture from the days of the ancient monastery.

A member of the Legend Collection from Preferred Hotels & Resorts, The Temple House is the fifth hotel of Swire Hotels in Asia and the third in the company’s House Collective portfolio, following The Upper House in Hong Kong and The Opposite House in Beijing. In wanting people to come to Chengdu and have a unique hotel experience, one they couldn’t get in Hong Kong or Beijing, The Temple Hotel really took into consideration the immediate context of its surroundings.

The hotel’s brocade brickwork, along with wooden screens, timber floors, step stones, overhanging roofs and flying eaves, all celebrate a city with a rich and fabled past. Attention to detail has also been given when it came to restoring the courtyard, which was built more than 100 years ago. It sat derelict and unused for many years, but has now been brought back to life, even more glorious than ever.

In Central Java, hugged by the fertile hills of Menorah, Amanjiwo’s luxury base pays homage to the 9th-century Buddhist shrine of Borobudur that it overlooks. Looming out of a patchwork of waist-high paddies, this colossal mountain of devotion has survived a series of volcanic eruptions and earthquakes to remain a beautiful restored gem from the past.

Amanjiwo’s own regal coral-beige limestone-wrapped entrance has a bell-shaped rotunda that emulates the famous pyramid-like structure’s huge high point. This is then lined with 36 standalone suites, arranged in two crescents, drawing out a quasi-blueprint of the UNESCO site’s centuries-old pattern.

The distinct shapes of the spiky stupas are clearly visible from the hotel — a ringside vista to soak in over a Javanese delicacy-filled lunch. But for a definitive aerial view of both Borobudur and the temple-inspired hotel, take a guided hike up the 1,000m-tall limestone hills rising directly behind Amanjiwo like sentinels.

Facing the sparkling Andaman Sea, Iniala Beach House in Phuket comprises three three-bedroom villas and a penthouse suite where Kim Kardashian once stayed. Opened in 2013, each room at Iniala Beach House is a hallucinogenic display of furnishings and quirky hotel designs. There’s a villa decked out by Mark Brazier-Jones, whose work inspired much of the set in Fifty Shades Of Grey, as well as one by master carpenter Joseph Walsh of Ireland. But let’s talk about Villa Siam, or most specifically, its Golden Bell Spa designed by Thailand’s own Eggarat Wongcharit.

Step inside the gold-leaf-adorned bolthole and you’ll see that you’ve actually stepped into a Thai temple bell with a deluxe dome-ceiling. There are also ornate woven bamboos to tastefully downplay the gold-engulf walls that come completely engraved with sacred Buddhist text —making sure guests are lulled into relaxation. Eggarat completed the grand look by creating golden massage beds and pedicure chairs especially for Iniala.

SEE ALSO: Where Kim Kardashian goes for a facial


Error: API requests are being delayed. New posts will not be retrieved for at least 5 minutes.