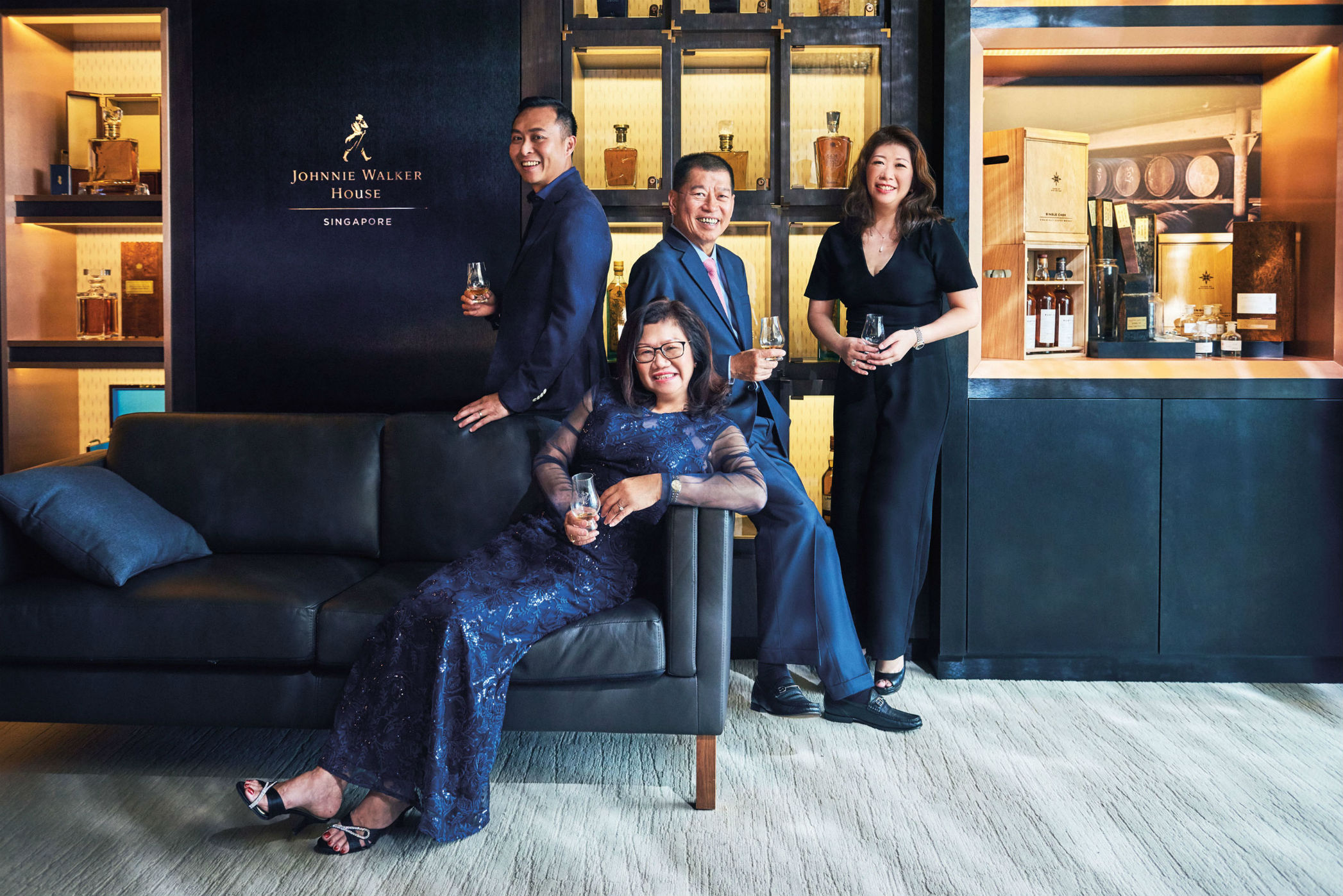 Datuk Goh Eng Hoe cuts a stern figure — but when he greets everyone on set like they were old friends, with warm laughter and jokes, it is easy to see that there are no pretences about this self-made businessman.

An ardent collector of rare whiskies and member of Diageo’s invitation-only Cask of Distinction programme, Goh recently became one of the privileged few in the world to own his personal cask of whisky, and will bottle his first dram in August.

His passion for whisky, however, ranks second to his love for his family, which includes wife Datin Juliana Chong, daughter Lynn and son-in-law Jack Chan. Read on to find out how this passionate collector of whiskies made the biggest — and most significant — purchase in his life as a collector, and how Goh’s love for whisky integrates itself into his familial bonds and charitable efforts.

Goh’s interest in whisky was first sparked seven years ago by his daughter, Lynn, who purchased myriads of whiskies for her father when she was studying in Australia. Gradually, Goh took a vested interest, and started a collection that would eventually number in the hundreds. Today, Goh even has a custom-made cabinet that houses his priceless collection.

It was also Lynn, who, in late 2017, organised a family trip to Scotland, where they toured numerous distilleries, particularly those under the Diageo portfolio. For a whisky enthusiast like Goh, it was a dream come true. There, Goh Eng Hoe was fascinated by the intricacies of whisky making, and expanded his knowledge by witnessing the meticulous process of whisky production, gaining newfound respect for the craftsmanship that goes into each dram.

In spite of the slew of different whiskies that Goh sampled, there was one cask from Highland distillery Clynelish that he simply “could not get his mind off”, as Lynn reveals. By the time he had returned to Malaysia, Goh had made up his mind. The said cask — with a unique age statement and bearing the characteristics of the single oak in which it gently aged over many years — may be his most indulgent purchase yet,  but also his “most gratifying”.

It is unsurprising that the Clynelish should speak to Goh, who professes a taste for the uber-exclusive The John Walker, a blend of rare malt and grain whiskies from distilleries favoured by the whisky legend himself — John Walker. (Clynelish has a long connection with the world of Johnnie Walker, having been selected for a number of its exceptional blends.)

Goh Eng Hoe founded his company, IRM Industries Sdn Bhn, shortly after graduating from college, nurturing it carefully over the years to become the thriving business that it is today. Lynn and her husband Jack oversee the company’s investment arm alongside her father. The duo are poised to take over the reins of IRM Industries when Goh eventually retires.

“My children have to continue the business that I started. I don’t believe that just because we are rich, they don’t have to work — that’s wrong,” says Goh.

Beyond passing down the business empire that he’s built to his daughter, Goh believes that the legacy he and his wife leave behind will far transcend the tangible.

Lynn affirms her parents’ desire to impart important values to her while she was growing up. “Mum and dad have been telling me to be down-to-earth since I was young, and that’s what I tell my daughter now, too,” she says.

Much like how Goh’s immutable character is instilled in his children, The John Walker, too, stays true to the philosophy of its eponymous founder, and is till today married together by hand in a century-old cask and triple matured.

Though Goh Eng Hoe and his family are ardent whisky connoisseurs, his passion for whisky is suffused with the desire to give back.

An international ambassador for the Lions Club International in Malaysia, Goh has helped build numerous schools in impoverished areas throughout Southeast Asia. After the catastrophic earthquake in Nepal three years ago, Goh organised a Lions Club trip to a village perched 9,000ft above sea level and 75km away from Kathmandu. Goh Eng Hoe would eventually oversee the building of a brand-new school facility, with Chong occasionally returning to ensure that the school remains sustainable.

Goh’s philanthropic nature stems from his humble beginnings. Born in a small village, Goh was all too familiar with how “the poor struggled to survive”.

Nowhere is his propensity for charity more evident than in Goh’s personal cask of whisky. While Goh plans to give some of his precious stock to friends and family, the final bottle of his prized cask will be auctioned for charity.

“When we do well in life, we must always remember to help the less fortunate,” Goh says. “That way, they can also enjoy some of the fruits of our labour.”

There is no finer blend than The John Walker, the epitome of the Johnnie Walker family of Scotch whiskies. Created in memory of the label’s founding father, each bottle is a tribute to the man who started it all.

The John Walker is also known as the Founder’s Blend because it utilises whiskies that John Walker loved during his lifetime. Just nine distilleries contribute to the blend, including some that are no longer in production. This makes each bottle of The John Walker that much more precious.

As a blend, The John Walker is exceptionally complex yet retains a natural harmony that lingers pleasingly on the palate. Full-bodied and elegantly structured, The John Walker brings with it a host of malty flavours bound together by the smoothness of its Speyside whiskies.

Each single barrel batch is blended by hand before being married together in a 100-year-old cask, to ensure that the final product is an unforgettable experience that John Walker himself would have loved.

Review: Basilico’s new Best of the Best menu is an all-star curation of its greatest dishes