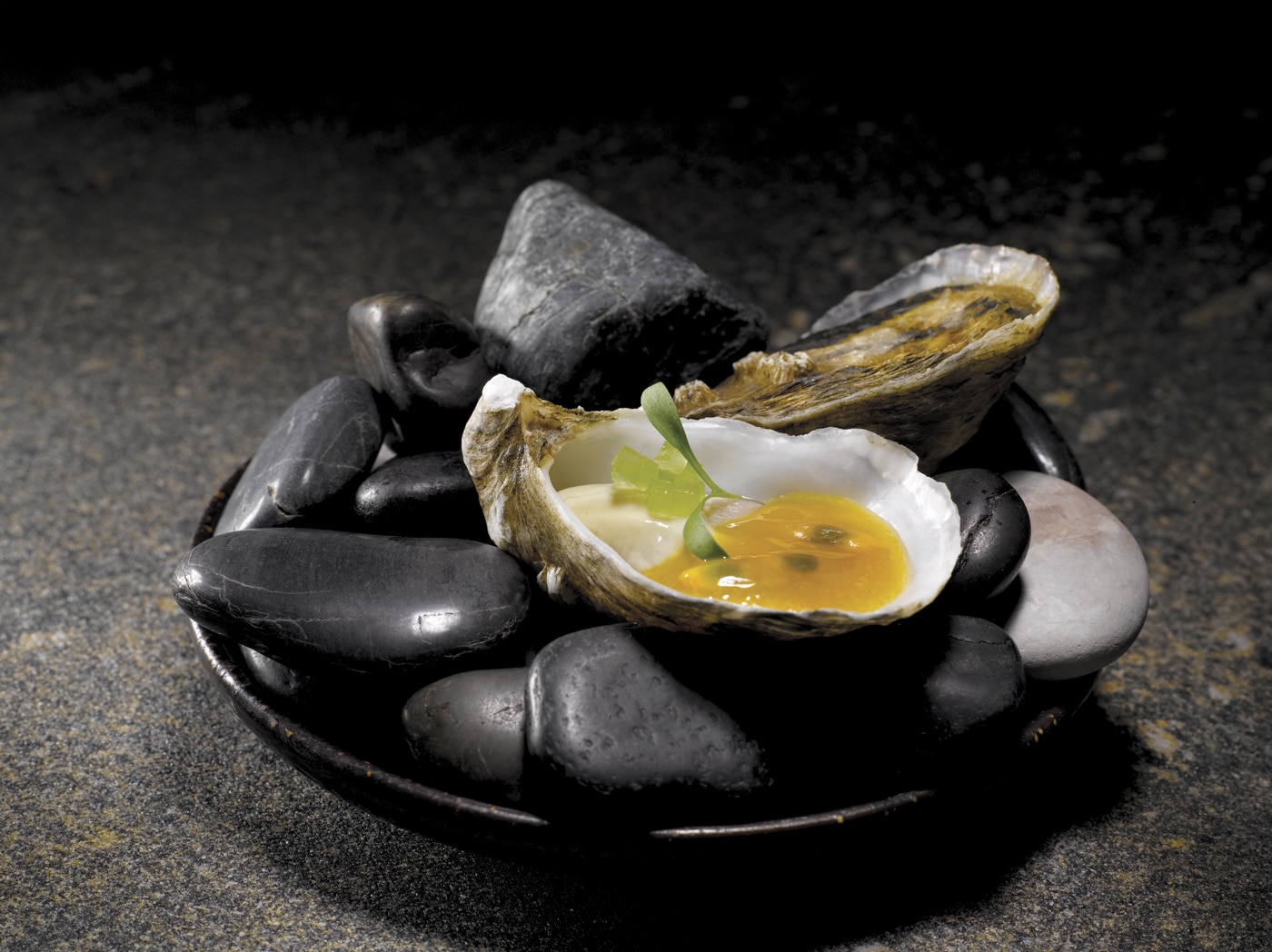 Commonly understood as a Spanish concept, tapas are gaining an all-new identity here as more local eateries are giving them an Asian spin. Sara Yap finds out more

Their roots are in Spain, but recent years have seen tapas — small dishes served as appetisers — make their way into eateries in Singapore. And in order to cater to local palates, a growing number of establishments have incorporated Asian accents into their tapas offerings. Think anchovy sticks, roasted duck and even chilli beef tartare on sharing plates.

The exact origins of tapas are unknown, but there are numerous stories surrounding their history. One of the better-known legends suggests that tapas originated centuries ago, when patrons in Andalusian taverns kept fruit flies away from their sherries by using pieces of meat or bread as a cover for their drink glasses — a plausible explanation, considering how the Spanish word “tapar” translates to “cover”. Today, tapas encapsulate a variety of appetisers ranging from meat to seafood, and are often paired with alcoholic beverages. They are popular in restaurants and bars all over Spanish cities such as Madrid, Barcelona and Seville.

Traditional Spanish tapas options include fried potatoes, salted cod and olives; and diners may order a wide variety for a more substantial meal. Outside of Spain, however, the cuisine has evolved to become more open to interpretation. This is the case in Singapore, where a growing number of eateries have introduced Asian flavours or even traditionally Oriental fare to their tapas repertoires so as to attract local diners.

Take for instance, Anti:dote bar, a sleek watering hole that serves fusion-styled tapas that marry Western and Asian influences: Anchovies are transformed into crisp, salty biscuit sticks, while bao (steamed bun) is stuffed with veal and black truffle. “People gravitate towards flavours and tastes that they are familiar with, yet are equally delighted when these are presented in new, creative ways,” says Anti:dote’s head chef Carlos Montobbio. Meanwhile, at the newly opened Hong Kong-inspired bar Sum Yi Tai, Cantonese food takes centre stage with dishes such as roasted meats and fried white bait. “We have a culture of sharing food in Asia, so the concept of Chinese tapas is only natural,” says co-founder Tay Eu-Yen.

By catering to local tastes while offering the exoticism of a foreign cuisine, the Asian tapas trend looks set to stay on the local food scene. As summed up by Montobbio: “Asian-inspired tapas are the easiest way for Singaporeans to get a taste of Spanish culture, with the familiarity of home.”

A bite of retro Hong Kong

Dressed in red hues with a mahjong tile wall and a playlist of old-school Cantopop hits from the likes of Sandy Lam and Beyond, this newly opened bar at Boon Tat Street is unapologetically oriental and retro. Inspired by 1980s Hong Kong, the establishment is equipped with a ground-floor tapas bar, dining room and rooftop lounge. It is operated by Coterie Dining Concepts, which is run by Sandra Sim and former Butter Factory co-founder Tay Eu-Yen; its kitchen is helmed by restauranteur Ricky Ng, who owns Chinese eatery Blue Lotus at Quayside Isle and was the former Chief Operating Officer of the Tunglok Group.

The extensive tapas menu serves assorted Cantonese delights such as roasted duck and XO carrot cake. It seems unusual to have such dishes served as tapas in a bar setting, but Tay is confident that the concept will appeal to customers. “We wanted to modernise the setting of the bar but not the food. So we came up with the idea of having traditional Cantonese dishes served as tapas,” she explains.

Other notable standouts include the maple honey glazed char siew (barbecued pork), which is succulent and slightly charred from the grill, and crunchy luncheon meat chips. And what is Cantonese cuisine without a nourishing bowl of soup? Try the bar’s white and green radish consommé, a comforting broth made with a mixture of pork bones, ribs and vegetables.

Some bars focus on their drinks and keep their food menu brief with the usual staples of breaded calamari rings, potato wedges and chicken wings. But this is not the case at this spot at Fairmont Singapore, which apart from its range of aperitifs, features an extensive repertoire of tapas as bar bites.

Prepared by head chef Carlos Montobbio, the dishes range from light snacks to more substantial offerings of meat and seafood. Highlights such as a thin-crust parmesan pizza topped with olive oil caviar, powdered tomato and sweet basil cress; and crunchy, sweet slabs of foie gras puff pastry, are a nod to Montobbio’s Spanish background and training in European cuisine.

There is also a wide variety of Asian-influenced creations. Take for instance, the black truffle buns, which put a twist on the ubiquitous dim sum favourite of char siew bao. The fluffy bread dough is infused with truffle oil and stuffed with tender veal cheek, foie gras and caramelised shallots soaked in Périgord sauce, resulting in a bun that explodes into a scrumptious medley of sweet and savoury flavours when eaten. No surprise, then, that Montobbio finds this house special an exceptionally popular dish.

His other fusion concoctions include raw oysters topped with wasabi cream and passion fruit jelly, and a combination of tuna sashimi and salted cod. In the latter, slippery pieces of tuna are served atop portions of meltingly soft brandade (a paste of salted cod and olive oil, which has its origins in Spain and France), and are given a spicy kick with jalapeño peppers. It sounds an odd match, but the sweet, salty and tangy flavours work in perfect harmony.

When it comes to Asian cuisine, this eatery will leave you spoilt for choice with its tapas menu dedicated to ingredients and culinary influences from all over the region. For instance, Peranakan, Indian and Thai flavours come into play in a minced pork pancake dish — where the tender meat is seasoned with gula melaka (palm sugar), infused with lemongrass and served with a creamy kaffir yogurt sauce — while Japanese influences dominate in the black miso tofu dish topped with daikon and sea grapes.

Head chef Lo Tze Jet explains that the idea is to marry the best of the region’s cuisines to great effect. “Asian food is intense, heavy, spicy and fragrant,” he says. “And when put together [on a plate], they can sometimes work really well.”

Keeping that in mind, the Sabah-born chef has rolled out some rather unconventional but delicious flavour combinations. His beef tartare, for example, re-imagines the French staple with wagyu beef imbued with bits of chilli and coriander and served with a crisp papadum. Drops of chilli sauce — a secret recipe which Lo learnt from his Peranakan grandmother — inject an intense heat to the concoction, which is served cold. The result is a delectable, savoury blend with a zesty kick.

Then there is the house special of scotch eggs, where the traditionally British creation gets a dash of Asian spice with a homemade Vietnamese chilli sauce. Instead of the usual hardboiled eggs wrapped in sausage meat, Lo’s rendition uses quail eggs with runny yolks, which are ensconced in fragrant layers of minced pork infused with coriander.

Another winner is the carbon-battered prawns: Marinated with a tangy red curry paste and coated with black bamboo powder, the crustaceans are scrumptious when savoured with the accompanying soy wasabi mayonnaise.