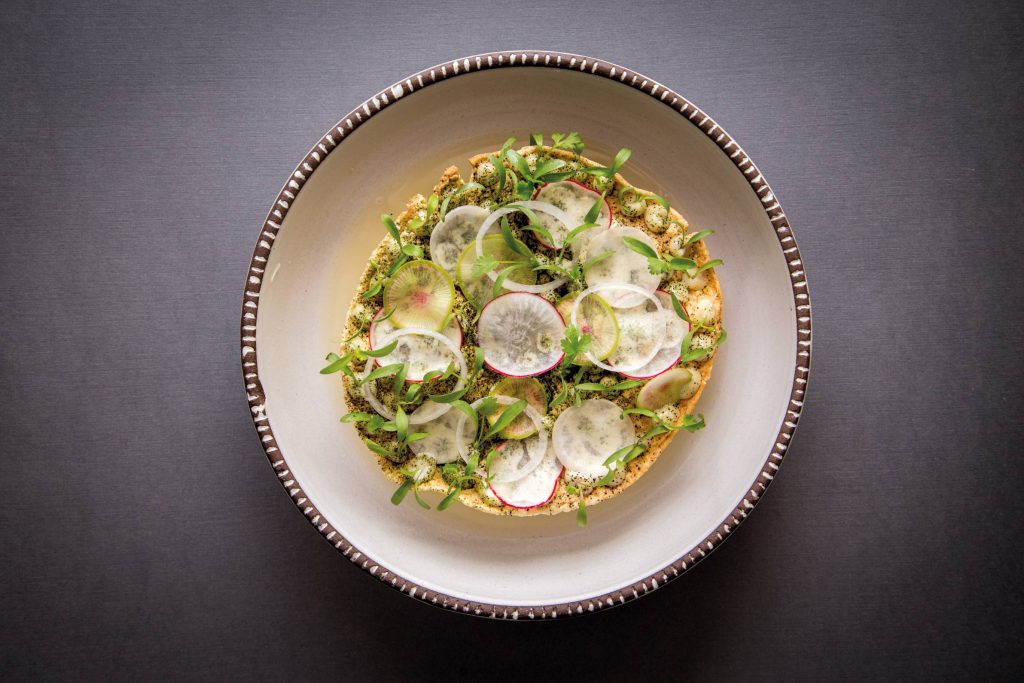 The aroma makes an impactful first impression. Even before the server lifts the top off a hollowed-out pumpkin to reveal grilled baby corn nestled on a bed of burning corn leaves, the smoky, bitter and salty notes of an intriguingly unfamiliar scent can already be picked up by sensitive noses.

It all makes sense when the waiter explains that the corn is slathered in chicatana (flying ant) mayonnaise. It’s this distinct earthy scent of crushed bugs, visible only as black specks in the sauce, that’s wafting through Mexico City’s fine-dining gem, Pujol, captivating the senses and tantalising the taste buds.

This amuse-bouche, an elevated take on ant salsa, is a popular seasonal speciality in the state of Oaxaca. It’s one of the reasons why gourmets from around the world are still vying for a table here 17 years after it opened. The ants, by the way, taste the way they smell, imparting a lingering earthiness to the baby corn. Another star dish on Pujol’s tasting menu is the transcendent mole (a complex sauce that’s integral to Mexican cuisine), featuring a deep chocolate-hued three-year-old mole madre (mother sauce) and a dollop of freshly made red-ochre mole. The difference in the depth, flavours and even textures between the aged and young moles are fascinating to taste
first-hand.

Helmed by the visionary chef Enrique Olvera – also the brains behind the popular contemporary Mexican restaurant Cosme and tapas joint Atla in New York City – Pujol is arguably ground zero of the wave of fine-dining Mexican restaurants that has swept through the international culinary scene in recent years.

Naturally, nowhere is the modern Mexican-food scene more vibrant than in Mexico City, which is flourishing with innovative restaurants and chic bars offering the best of local cuisine and spirits (think small-batch mezcal, not college-party tequila). “Mexico City (has become) a favourite for chefs,” Olvera says of the influx of chefs and intrepid foodies on culinary pilgrimages to the city. “They realised Mexican food is not what they thought it was.”

Located within the same upscale, tree-lined district of Polanco is Quintonil, run by young chef Jorge Vallejo, who happens to be an Olvera protégé. For gourmands enamoured by the farm-to-table movement, eating local is a breeze at this smartly appointed restaurant, which offers a menu that emphasises fresh, seasonal greens and produce grown in its nearby garden. In fact, Vallejo strives to keep the restaurant’s carbon footprint as minute as possible by working with small-scale suppliers, and it’s said that many ingredients travel just 30 metres to get to diners’ plates. Since the menu depends so much on seasonal availability, ask the waiters for tips on the best dishes to order.

Over in the trendy Roma Norte district is Rosetta, where chef Elena Reygadas, winner of the 2014 Veuve Clicquot Prize for Latin America’s Best Woman Chef, showcases her deft hand at using Italian-centric cooking techniques on Mexican ingredients. Fresh salads are given a Mexican twist with local herbs and spices, and almost everybody orders the veal sweetbreads as part of their meal. The pastries are most certainly worth saving room for – the roasted figs with hoja santa (an aromatic herb) ice cream are both sweet and refreshing at the same time.

When it’s time for a nightcap, there’s a myriad of stylish speakeasies in which to find perfectly mixed cocktails, such as Jules Basement, Maison Artemisia and Felina Bar. But the true connoisseur knows that mezcal, the artisanal agave-based cousin to tequila, is liquid gold in the city. Artisanal mezcals are often handmade according to centuries-old techniques, which include roasting the agave plant in underground pits to give it that signature smokiness before the flesh is crushed under a large stone grind – which is sometimes still powered by a donkey or a horse – to extract the nectar. Like single-vineyard or -block wines, these small-batch mezcals offer a wide and complex range of flavour profiles, with notes of anything from light florals and fruits to spicy peppers and earthy wood.

While many fine-dining restaurants offer a curated selection of mezcal pairings, it’s also great fun to hit up a mezcalería or two, truly to get a sense of the varied nuances of this spirit, which can hardly be found outside the country. With whimsical framed paintings and cosy nooks to settle into, the quirky La Clandestina is one of the city’s best, with 50 to 60 mezcals on the menu, including rare aged varieties that are harder to come by. Mezcal might be served in shot glasses and come with a dish of orange slices and spiced salt, but don’t be fooled into downing the drink in one. Instead, sip and savour it as you would a dram of whisky to allow the flavours fully to develop on your palate. When in doubt, flag down one of the bar’s knowledgeable staff, who can provide spot-on recommendations depending on your taste preferences.

Travel junkies will love the fact that varied regional cuisine together with abundant and unique produce means groundbreaking restaurants can be found outside the city, too. Highlights include Origen in Oaxaca and Malva in Baja California. But to complement a trip to endlessly hip Mexico City, the Yucatan Peninsula, with its stunning emerald blue beaches and laid-back vibe, might be the most appealing.

Upscale yet understated, Tulum is a favourite destination of the rich, who love this hippie town for its barefoot-luxury resorts, pampering spas and, yes, delicious Yucatan cuisine. In fact, the region so fascinated René Redzepi, chef at three-time World’s Best Restaurant winner Noma, that he chose Tulum for his latest pop-up concept, which ran earlier this year. Redzepi and his team did extensive research into the indigenous ingredients of the region to devise a US$750, 15-course tasting menu that naturally (but of course) sold out quickly upon its launch.

Redzepi’s residency may be over but Hartwood, an open-air restaurant built in a jungle clearing, is what those in the know will travel for. It’s the brainchild of chef and co-owner Eric Werner, who trained under New York chef Wylie Dufresne. Werner obsesses about sourcing the freshest ingredients grown, farmed and caught by the local community and then cooking them with a light, deft hand to showcase the exotic flavours of the region.

The food, it must be said, lives up to the hype. A ceviche featuring line-caught fish from the Caribbean just 100 metres from the restaurant has a firm bite and is beautifully complemented with a tart and smoky mezcal-and-lime dressing. The slow-roasted pork is coaxed into melt-in-your-mouth tenderness after hours in the restaurant’s wood-fired oven. And everything comes adorned with fascinating Yucatan leaves, herbs and roots like chaya (a local shrub), jicama (Mexican turnip), and plantain, to add contrasting textures and bright flavours to the dishes.

It’s important to note that, due to its no-reservations policy, it’s notoriously difficult to score a table at Hartwood. Finicky travellers might indulge in a common practice of getting their hotel to enlist the services of a local runner to wait in line, but where on Earth’s the fun in that? Instead, get yourself into the hang-loose Caribbean spirit and join the convivial crowd for exceptionally fresh cocktails at the restaurant bar while you wait. Salud!

travel food
Karen Tee
Sign up to get the latest luxury and lifestyle news delivered to your inbox.

Kindred Spirits: A profile of whisky’s many personalities