Where to find the best satay bee hoon in Singapore 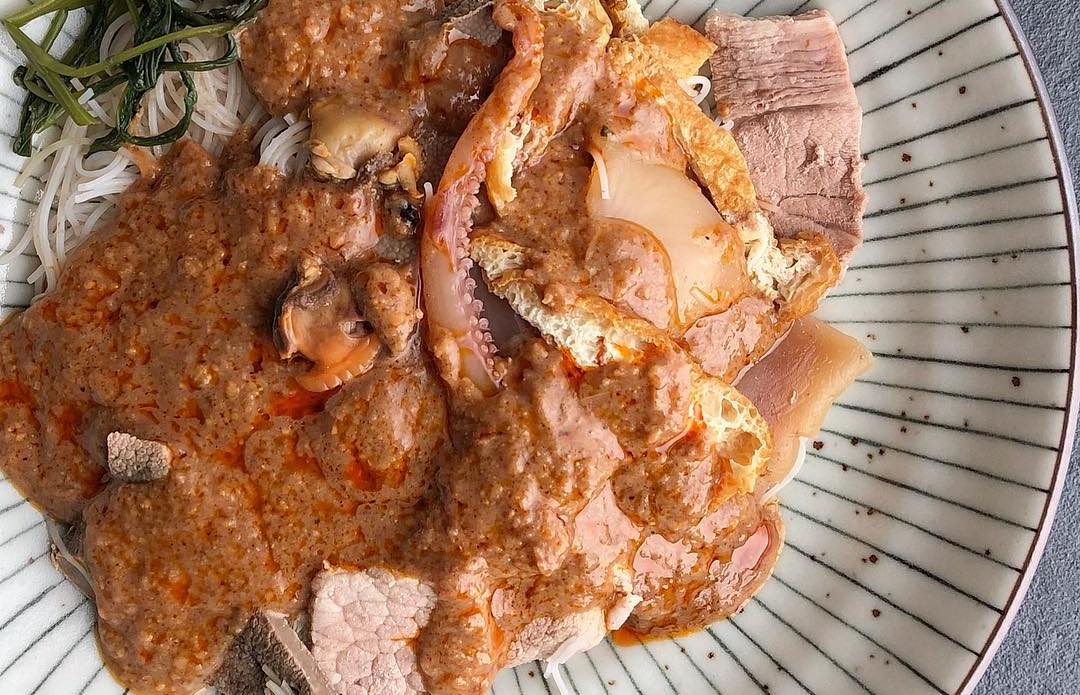 Those who grew up eating plates of satay bee hoon know where the appeal lies, but for the untrained eye, it looks like a chaotic plate of brown gravy which is, quite frankly, not the most gram-worthy.

But as they say, one’s man’s trash is another man’s treasure and to us, satay bee hoon is a delicious mess that’s filled with the taste of nostalgia. A typical offering will see thin vermicelli noodles, vegetables, cuttlefish, pig’s liver, pork slices, and blood cockles covered with a generous serving of satay sauce — although this variation does change depending on the stall.

While it’s commonly associated with Teochew people, the dish is said come from a cultural fusion between the Chinese immigrants and the Malay or Javanese in Singapore. The sweet, salty, and spicy peanut sauce is similar to the one served alongside satay, which is where it got its name from.

Satay bee hoon is getting harder to find these days, perhaps due to the laborious work that goes behind it and the changing palates of the newer generation. Before it completely disappears, we’re documenting some of our favourite heritage hawkers that still serve the best satay bee hoon in Singapore.

Ho Guan Satay Bee Hoon is a hidden gem in the far out locale of Changi Village Food Centre, helmed by an elderly couple. They’ve been serving out dishes since the hawker centre first opened, although it has to be said that they sold economic rice for a good thirty years before switching to satay bee hoon. The transition has been (and still is) very well received, perhaps due to their addictive homemade sauce that’s been laboriously crafted for hours over the fire, complete with freshly ground spices and peanuts.

You’ll be able to smell Bak Kee Teochew Satay Bee Hoon before you even reach the stall. Think a sweet, nutty aroma that wafts through the air and pulls you in — that’s the smell of heaven if you ask us. The sauce here is rich and grainy with larger peanut chunks, and the mild spiciness of it all cuts through its thickness well, making it a perfectly balanced option we go back for time and time again.

Bak Kee Teochew Satay Bee Hoon even has a manufacturing arm — they’ve got a factory in Singapore that crafts their special sauce and supplies them to other stalls around the island.

If you love your sauce a little lighter, sweeter, and laden with tons of nutty aroma, we recommend a trip to Sin Chew Satay Bee Hoon. Here, the stall uses a secret blend of more than 10 spices for its sauce (which doesn’t include sole fish powder, shrimp or fish sauce), making the dish a little more unique than others around the island. Instead of pig’s liver, Sin Chew Satay Bee Hoon’s menu comes with prawns, an ingredient that isn’t commonly found in the dish.

The stall is closed on Monday, Tuesday and Friday.

When Fengshan Food Centre — more fondly referred to as Bedok 85 — is brought up in name, you’ll think of a couple of dishes: Bak Chor Mee and barbecue chicken wings. Yet, for those in the know, the inconspicuous Shi Wei Da Satay Bee Hoon is also a running contender for the best stall in the area. The Michelin Bib Gourmand joint serves generous portions all doused in an aromatic gravy that tastes exceptionally clean and well-spiced, best had with its bee hoon-egg noodle mix.

Centre Satay Beehoon has been serving diners in Ang Mo Kio and around the island since 1979. A homemade gravy with dry-roasted peanuts coats every stand of vermicelli for a smooth, nutty concoction worth a visit. Do note that this version’s sauce is a little thinner, making it lighter than other drier alternatives out there.

The owner of Shun Fa set up shop in the 60s when he moved to Singapore from Shantou, China. A plate of egg noodles and vermicelli forms the base of the dish, before its drenched in a lavish pour of the flavourful satay peanut sauce. The owner also revealed the secret to Shun Fa’s aromatic gravy — the addition of fish sauce in the sauce blend. Looking to recreate the taste at home? They even have packets of satay sauce you can buy home.

Silky noodles, fresh seafood, and a luscious, thick gravy are just some of the things that makes Meng Hui Satay Bee Hoon one of our favourites in town. The owners have been dishing out plates here for more than 30 years, and are best known for the aromatic gravy and generous portion sizes.

In for a treat: The new restaurants and menus to discover this month

Lunar Delights: Our picks of the best mooncakes from luxury hotels