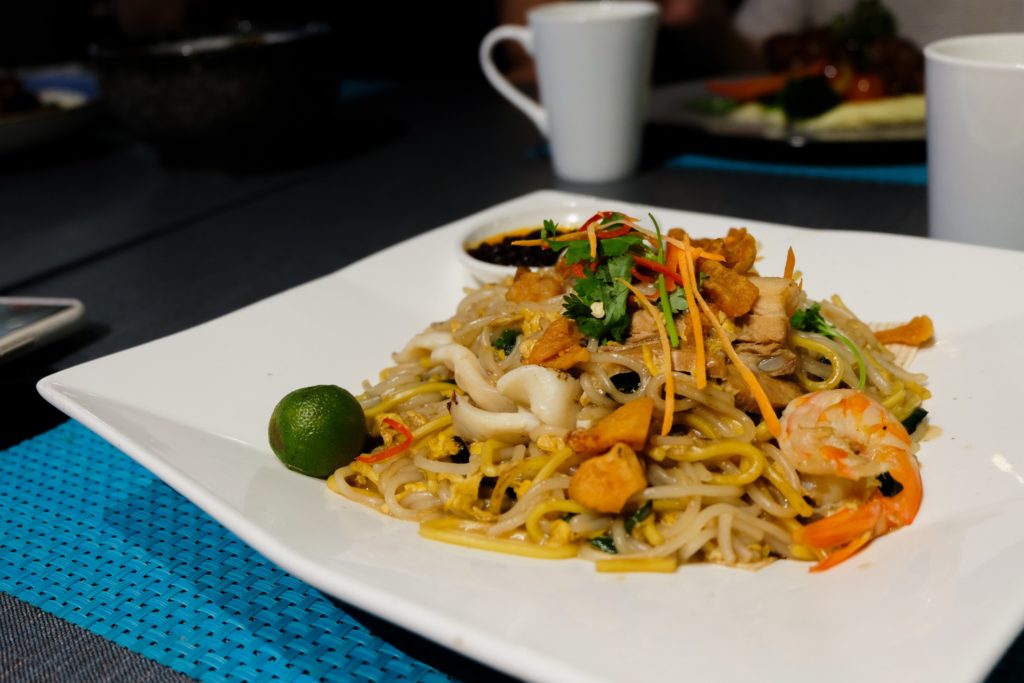 If you’re a fan of local noodle-based dishes like laksa and prawn noodles, chances are, you love hokkien mee too.

The moreish dish is a stir-fried plate of umami goodness, comprised of yellow and thick vermicelli noodles married with a lip-smacking broth of pork bones and prawn heads. The plate is then elevated with prawns, squid, pork belly strips, egg and crispy fried pork lard (usually optional, but we beg to differ). Top that with a squeeze of fresh lime and some heat from the sambal and you’re good to go.

Yet for such a popular hawker dish, there are many different accounts as to how and where it originated.

Some attribute the creation of the dish to a stall next to the old 7th Storey Hotel, located near Rochor Road. Other accounts claim that the version we have in Singapore is the Peranakan variation of the dish.

Alternative reports suggest that hokkien mee was originally called “Rochor Mee” and was created by Hokkien immigrants who worked at noodle factories in the 1930s. According to that story, these workers would congregate along Rochor Road after work and fry excess noodles from the noodle factories over a charcoal stove.

Whatever its origins are, nothing really changes: it’s still that same, gooey mess that’s here to satisfy your cravings for a mouthwatering plate of noodles. Read on for the full list of our favourite heritage spots in Singapore.

Enter Bedok Corner and you’ll find three snaking queues: one for the cheng tng (a cold, sweet dessert soup) stall, the other for the cuttlefish kangkong and most importantly, the Hokkien Mee.

The version at Bedok Corner is delightfully moist and flavoursome with every bite, a trait we think is attributed to their choice of noodles. Unlike most stalls, they use the thin white bee hoon variety (rather than the thick version), which makes it easier to soak up all the goodness from the robust stock.

Before you even catch a glimpse Swee Guan Hokkien Mee, you’ll know when you’re near. No, we’re not talking about the throngs of people standing in line. We’re talking about the intoxicating aroma of the briny prawn heads simmering over the stove at the 41-year-old store.

What sets Swee Guan apart is a naturally charred, wok hei flavour that comes from the charcoal fire it is fried in. That, coupled with a generous serving of seafood and full-flavoured stock, makes this an irresistible plate for any palate.

The original creator of Serangoon Fried Hokkien Prawn Mee was considered a legend in the field for his mouthwatering, wok charred plates of noodles. Before his retirement, he handed his skills over to his son and a friend, and his friend is now the only one helming his recipe for generations of diners to come.

Here, the dish is served with an aromatic Opeh leaf, which brings a subdued, woody fragrance that is slowly released as you dig into the warm noodles.

Old Airport Road is home to stall after stall of delectable treats for both locals and travellers alike, so it shouldn’t come as a surprise that there’s one for Hokkien Mee as well. Nam Sing Hokkien Mee has been operating since 1963, serving up steamy plates of noodles day after day.

Despite the usual sambal chilli that’s served with the dish, the owners of Nam Sing have insisted on using fresh-cut chilli to pair their plate with. Each noodle is beautifully glazed with the rich prawn and meat stock its been stir-fried with and lightly perfumed with a subtle smoky flavour from the wok hei.

If you love your noodles generously wet and gooey, you’ll find yourself right at home with the offerings from Xiao Di Fried Prawn Noodle. With every scoop (yes, a spoon is absolutely necessary here) comes noodles drenched in the rich prawn stock and beautifully accessorised with oodles of stir-fried egg bits, pork and seafood.

Sign up to get the latest luxury and lifestyle news delivered to your inbox.
Jocelyn Tan
Wine and Dine

Peranakan restaurants in Singapore: Where to have modern and traditional nyonya food