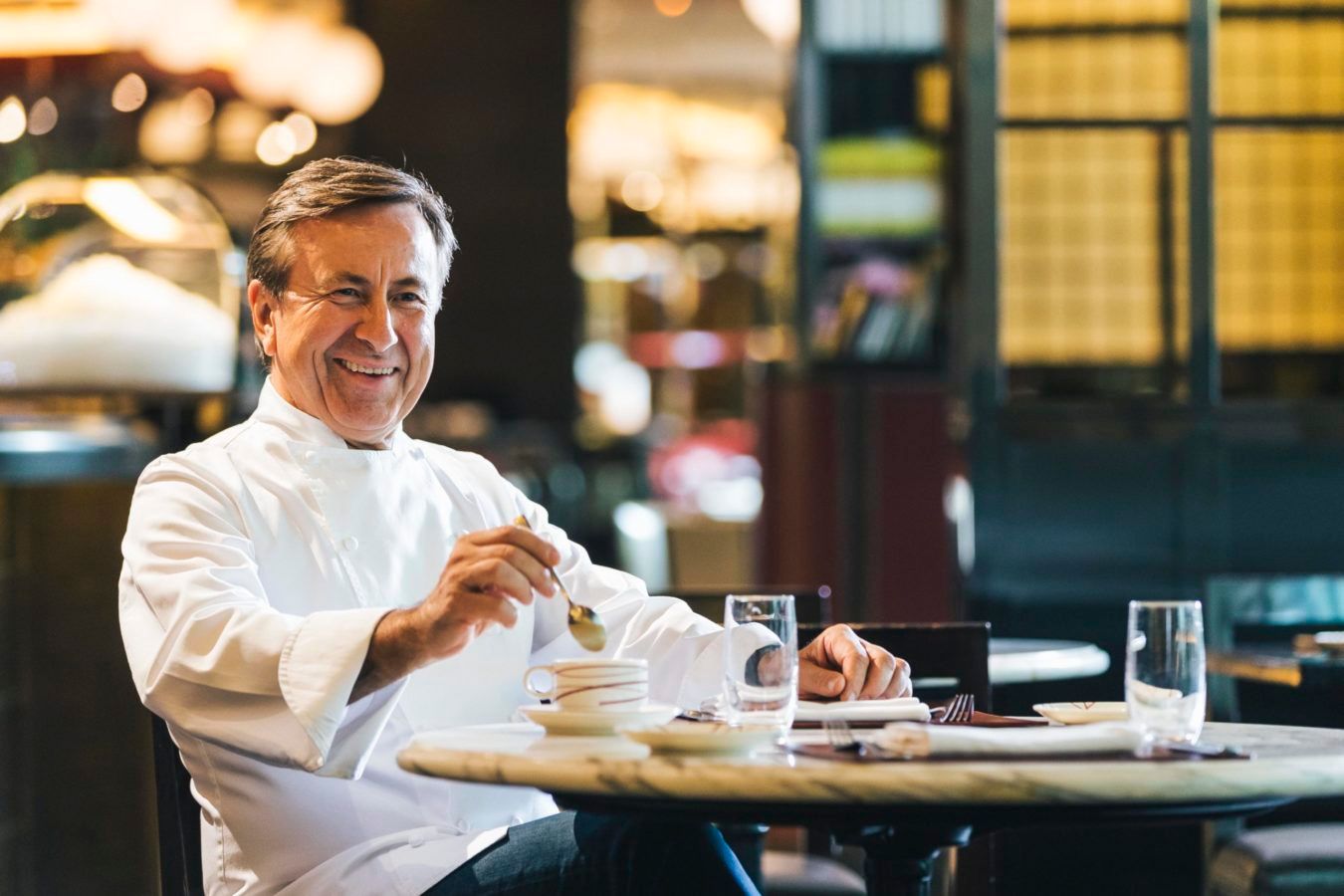 Daniel Boulud is worried. He walks into the room wringing his hands, slightly flustered because he missed an earlier appointment with another reporter. “Should I call and say sorry?” He asks a minder. “Can we do the interview over Zoom?”

For a chef named the Best Restaurateur in the World, Boulud cares about you. He’s curious about the restaurants I’ve been to recently. He’s delighted I enjoyed street food in New York. In Singapore for two days this month hosting and cooking at his restaurant DB Bistro & Oyster Bar, he carves out time to chat with young local chefs.

The New York-based French chef, who turns 67 this year, has barely slowed down since he landed in the city in 1982. Last year, he opened three new concepts while renovating his flagship restaurant, Daniel. This year, he’s launching his first restaurant at sea called Le Voyage. An outpost in Los Angeles – his first on the West Coast – is expected in 2022. And that’s not counting his multiple locations in Toronto, Dubai, Miami and Montreal.

Still, Boulud sweats the small stuff. During a dinner at DB Bistro featuring a selection of dishes from his newly opened New York restaurant Le Pavillon, he introduces himself to each guest. As I leave the interview, he asks his minder again about his missed connection. During our chat, Boulud discusses bistro cooking, fine dining and what drives him after all these years.

How has Covid affected the way you run DB Bistro and your restaurants around the world?

Covid has not affected only DB Bistro, Marina Bay Sands, or even Singapore, it has affected the entire world. Every business has suffered. A lot of staff went back home during the shutdown and haven’t been able to come back. The lack of doing business like we have always known is very challenging. Our world is all about hospitality and making people feel happy. Suddenly, we have to very careful with the way we welcome you. If you have a family of six, one has to stay outside or eat somewhere else. We learn to live with it, but we’re also working very hard to bring back what we stand for. It’s very important.

How does a bistro stay relevant in today’s dining scene?

You don’t always have to be cerebral to be fine dining. Spontaneity sometimes is the most fun!
Daniel Boulud

You mentioned fine dining, which leads me to my next question. You were quoted in a Grub Street interview saying, “I see so many fine-dining restaurants play it safe because they’re afraid to let go of the wire that holds them to the three-star pedestal.” What drives you to do something different?

I love Michelin, they’re fantastic. I believe that if I deserve three stars, it’s because we continue to do what we do. My restaurants have never been modelled just to please Michelin. I try to please my customers first. I think I have the talent required to hold three stars. It’s just a decision that I want my restaurants to always be a little bit more approachable. If I’m going to be a two star, I’m going to be the best of the two. But do I play it as safe as many do? I don’t know! Like my colleagues, we explore a lot of opportunities in cooking like seasonal dishes. To me, a three star dish is perfectly well composed, well executed, well seasoned, well balanced. But at the same time, not every dish is modelled for perfection. Certain dishes that brings a lot of pleasure are not all for the eyes. It’s about the taste, the technique, the composition and the experience.

It sounds like it has to speak to you emotionally.

Yes! I like the fact that cooking is very emotional. You don’t always have to be cerebral to be fine dining. Spontaneity sometimes is the most fun! Once you create a dish, it’s all work to keep it the same and perfect. But the fun is really creating the dish.

Does a bistro have to evolve to be successful?

How does sustainability play a role in how you run your restaurants?

Sustainability starts by making effort to be more responsible, and growing that effort to make an impact. That’s what we do at all our restaurants, but it takes time, it takes a lot of concerted effort to succeed. It’s easier to make the energy we use sustainable, but with food, there are certain products that cannot always be local. Is the olive oil going to come from Malaysia? I don’t know yet! It’s going to have to come from further!

It doesn’t mean because you are doing vegetables tomorrow, that you are sustainable
Daniel Boulud

I noticed that it’s not something you shout about at your restaurants, compared to others who make sustainability part of their selling point.

We have the same farmers as the ones who shout about it! We share the same suppliers, more or less. There’s such a small proportion of chefs who can claim they are sustainable by their own farming, but at the same time, everyone makes an effort to grow that as much as possible. And that doesn’t mean because you are doing vegetables tomorrow, that you are sustainable. There’s still a lot of ingredients that go into a dish that might not be all local. Frankly, the biggest garden in America, they’re not in New York, they’re in the Carolinas, they’re in Texas, they’re in California.

But I support sustainability because I was born and raised on a farm. We were about 98-percent sustainable. Only on Fridays we would buy fish from the fishermen because that’s the only thing that we didn’t grow, but we did catch a lot of wild trout and crayfish in the rivers. We were raising our own animals, making our own cheese, our own cured meat and eating our own vegetables. I know very well what sustainability means, because I seen it. It’s a way of life!

In the past few months, you renovated Daniel, opened Le Pavillon, and took over Augustine. You’re opening Le Voyage and your first West Coast restaurant in 2022. You were also named the World’s Best Restauranteur at the end of last year. This comes on the back of a 38-year career since moving to New York in 1982. What motivates you?

Especially after Covid, it’s about making sure that my team is ok. That our business is good. Why did I redo Daniel? Because we were reaching the tenth-, eleventh-year mark of the last renovation, and every ten years I like to make sure my restaurant is totally refreshed. New energy, new feeling. So it was nice to bring back Daniel.

For La Pavillon, I really wanted to focus on seafood and vegetables, which is something I always done in all my menus, but sometimes the balance between meat and seafood is a bit more prominent. So the menu there is 50 percent seafood, 40 percent vegetables, 10 percent meat. That was a great motivation for us.