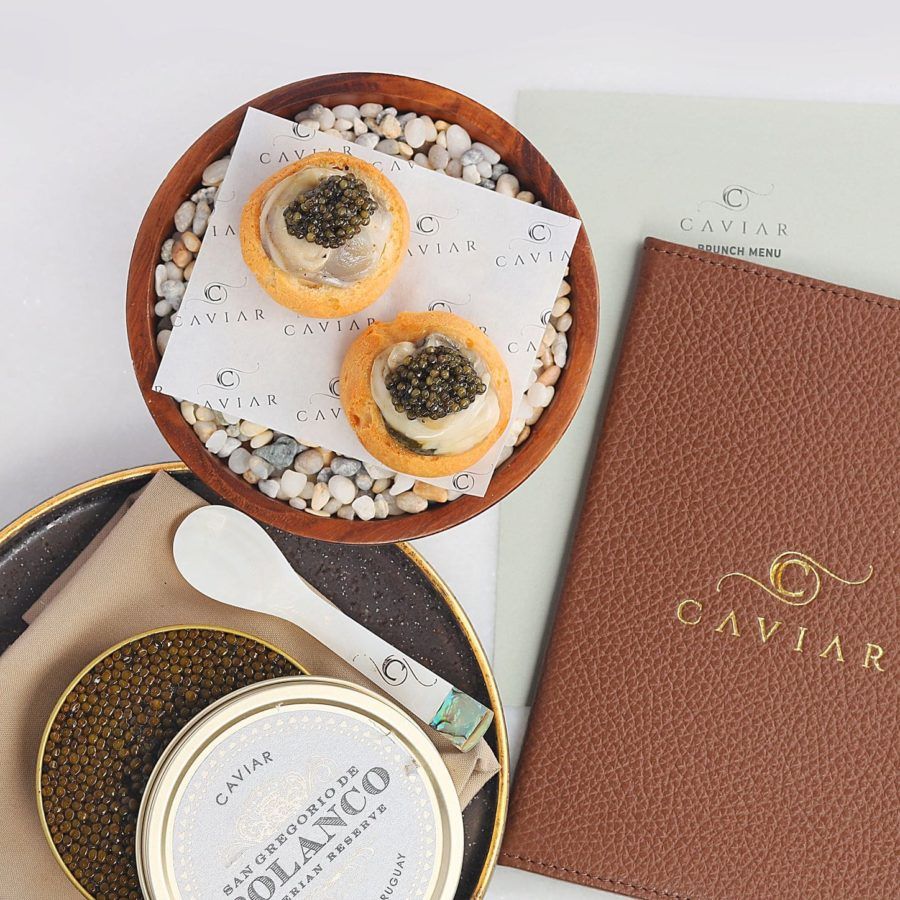 A prettily plated trio of snacks greets us as we sit within the handsome wood-toned confines of Caviar restaurant — grilled salsify sticks crusted with chorizo crumbs, croquettes stuffed with corn and manchego, and smoked oyster puffs filled with cream cheese.

The latter two are crowned with dainty orbs of caviar: Eight Gems No. 2 Superior Oscietra and Giaveri White Sturgeon respectively. Both bites are delightfully warm and moreish, with the buttery roe pearls injecting little pops of saltiness. The crunchy salsify stalks, smoky from binchotan coals, aren’t bad either, apart from proving slightly unwieldy as the chorizo bits tend to fall off while you munch on them.

It’s a promising start to Caviar’s new seven-course Sunday brunch menu, which offers jazzed up renditions of staples the likes of roast beef with Yorkshire pudding and Eggs Benedict, paired with tipples such as Dom Perignon 2010 or Legras & Haas Intuition.

Based on the restaurant name, one would expect to be inhaling sturgeon roe throughout every course, but this isn’t the case. The Eggs Benedict, for example, is finished off with shaved foie gras instead of lashings of caviar. We aren’t disappointed: the strips of foie gras give an umami-packed flavour punch to the wobbly egg, which sits atop pan-seared Jambon ham and baked portobello mushroom drenched in a tart Chardonnay sabayon. Also memorable is the roast beef, slices of melt-in-your-mouth Westholme Australan wagyu with all the trimmings of smoked potato purée and fluffy Yorkshire pudding.

A spotlight on sturgeon eggs at Caviar restaurant

In line with the restaurant’s theme, the counter seats and open kitchen are separated by a row of caviar tins on ice. The fine dining venue is owned by restaurateur Jason Ong, who runs casual eatery Uni Gallery and seafood supplier OosterBay.

The prized fish eggs eventually reappear later in the meal. A slurp-worthy pasta enveloped in uni sauce is nicely al dente and festooned with a dollop of Kaluga Queen Crossbreed from China, which supplies a third of the world’s caviar. The velvety roe has larger beads than other varieties and boasts a mild, nutty flavour that isn’t too salty.

Caviar — Eight Gems No. 2 Superior Oscietra again — also makes its way onto butter paired with a rye bun, and a lovely yuzu tart petit four for a contrast of sweet, sour and briny flavours.

It’s a splendid brunch, but considering the establishment’s wide range of caviar, we would have loved to sample more of its options in each course. For example, there’s a missed opportunity in our second course of mussels, a refreshing concoction that has the shellfish served in a clear tomato broth and garnished with ikura — which can be easily substituted with actual caviar since they share similar taste profiles.

That said, the food here shows potential, with every course masterfully executed and beautifully presented — a dessert of olive oil ice cream with white chocolate and prosecco-soaked strawberries, for instance, is the perfect sweet ending to an otherwise heavy meal. All the restaurant needs right now is more of its namesake raison d’être to take it from good to great, so guests leave feeling like they’ve been pampered at every turn.