Your guide to cold brew vs. iced coffee 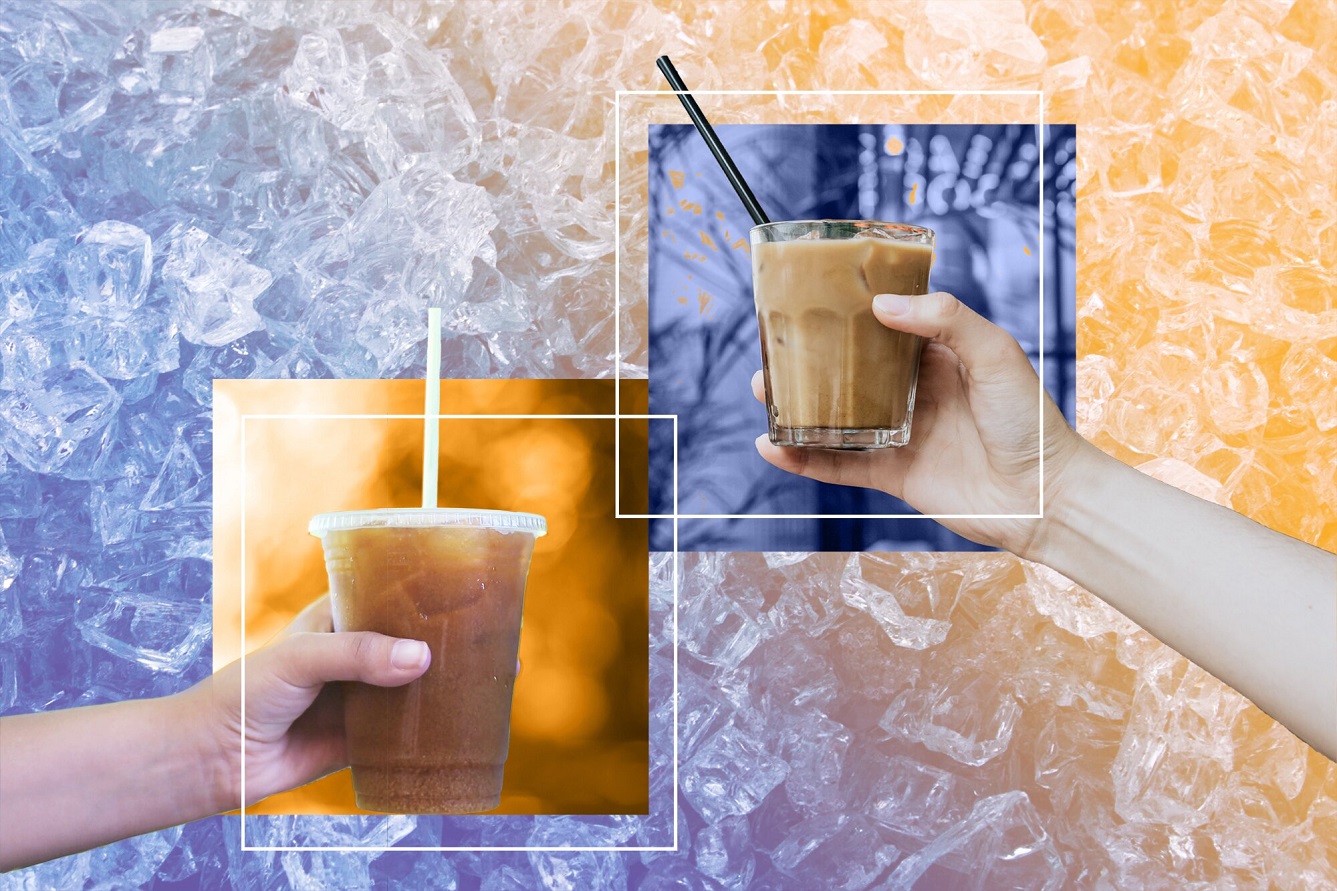 Wine & Dine
Your guide to cold brew vs. iced coffee
Share
Next article

If you’re a coffee newbie who just figured out the difference between lattes and cappuccinos (it’s all in the milk, folks), it’s understandable if you’re thoroughly confused about the cold brew vs. iced coffee debate. After all, both drinks look exactly the same, are chilled enough to refresh you on a hot day, and are served on the rocks — yet, cold brew seems to consistently cost much more than its counterpart. What gives?

Here, Michael Phillips, the director of Coffee Culture at Blue Bottle Coffee, a speciality coffee roaster and retailer from California, America’s​ National Coffee Association, breaks down everything you need to know about cold brew vs. iced coffee to help you decide which cup of Joe is best for you and your tastebuds.

In general, there aren’t any set-in-stone bean requirements for cold brew vs iced coffee, and the type of roast used varies from café to café, says Phillips. For example, some coffee shops may lean toward a darker roast profile for iced coffees, but Blue Bottle uses “brighter” (read: more acidic) coffees to achieve a greater range of flavours, he explains. On the flip side, “cold brew tends to take some of the [emphasis] away from the fruit notes and brighter flavour attributes of a coffee,” says Phillips. “If you have a very expensive, lightly roasted, and high elevation coffee from somewhere like Ethiopia, you would likely not want to brew up a gallon of it as a cold brew. You would likely lose out on a lot of the magic it has to offer.”

One of the biggest differences between the two styles of java is the brewing method. Iced coffee is typically created by brewing coffee with hot water, then cooling it down immediately (i.e. by pouring it over ice, a technique known as “flash brewing”) or shortly after (i.e. stashing it in the fridge), says Phillips. Cold brew, however, takes quite a bit longer than an ad break on Hulu. “Cold brew is a method that uses immersion (the coffee grounds and water sit together and steep), done with room temperature water over long periods of time — up to 24 hours in some cases,” explains Phillips. That’s why the drink often costs more than its iced counterpart.

Even though concocting cold brew takes a bit of forethought, the process itself is doable even for the least coffee-literate folks, says Phillips. “It requires very little specialised gear — you could even make it in a bucket if you wanted/needed to.” To brew, pour pre-ground or homemade, coarsely ground coffee into a jar or large container, pour in your water (try 3 ounces of grounds and 24 ounces of water for a total of 24 ounces of coffee), gently stir, cover, and let sit in the fridge for at least 12 hours, according to America’s National Coffee Association. Then, strain your brew through a coffee filter or fine-mesh sieve lined with cheesecloth, mix with water to taste, and serve over ice. You can also invest in cold brew supplies to make matters easier, such as a coffee subscription company, which are similar to tea bags and take filtering out of the equation, or a cold brew kit, which features a “pour-and-store” pouch to brew your Joe in and pre-measured coffee “bean bags” for a filter-free experience.

Unsurprisingly, those differing brew methods mean each type of beverage has a totally distinct taste. “Hot water does a better job at preserving brighter flavour notes but can bring out bitterness when cooled if not done well, whereas cold brew focuses on body and sweetness,” says Phillips. In other words, iced coffee will have a bit of wine-like acidity that can, at times, taste bitter when chilled; cold brew will taste a bit sweeter and have a thick, creamy texture, thanks to the slow brew method and consistent temperature.

The cold brew method is also a better choice if you’re looking to brew not-so-fresh beans — meaning you’ve had them for longer than 20 days after the roasting date listed on the bag — that have begun to lose their flavour. “[Cold brew] can bring new life to older beans in a way that hot brew has a hard time matching,” says Phillips.

The mouthfeel of the two brews differs as well. Iced coffee is typically made in smaller batches with a paper filter, which removes most of the sediment and oils and, in turn, produces a lighter-bodied, smoother cup, says Phillips. The cold brew you’d sip on from a coffee shop, on the other hand, is often made in large batches with a cloth, felt, or thin paper filter that may allow some sediment to sneak into your cup, creating a coffee with a bit more texture, he explains. While iced coffee is typically brewed with a coffee-to-water ratio of 1:17 (called the “Golden Cup Standard” by the Specialty Coffee Association of America), cold brew can easily be brewed at a higher strength (think: reducing your coffee-to-water ratio from 1:8 — the standard proportion for cold brew — to 1:5), which further increases the body and mouthfeel, he explains.

Despite all those differences, neither cold brew nor iced coffee is inherently more caffeinated than the other. The reason: Caffeine content all depends on the amount of coffee used in the brew, says Phillips. “It is entirely dependent on the recipe a café chooses to use in their brew,” he explains. “These can and do vary dramatically! It is a common trend for the cold brew to have higher strength [of caffeine], but it really comes down to the desired result and quality control of the café as to how closely and consistently they achieve it.” All that’s to say that the pick-me-up you get from a cold brew may be roughly the same as what you’d get from an iced coffee, depending on the recipe used. And a cold brew from one coffee shop may have a much higher caffeine content than the same drink from another.

What’s more, coffee comes with a few potential health perks. An 8-ounce cup of coffee provides less than 3 calories and 118 milligrams of potassium — an electrolyte that helps your nerves to function and muscles to contract — according to the United States Department of Agriculture. Plus, the brown bevvie offers plenty of immune-boosting antioxidants — chemicals that neutralise cell-damaging free radicals, Rachel Fine, MS, RD, a registered dietitian and owner of the nutrition counselling firm To The Pointe Nutrition in New York City, previously told Shape. In fact, research shows that roasted coffee has about the same amount of polyphenols (compounds found in certain plant foods that may slow the cellular ageing process and improve heart health) as red wine, cocoa, and tea. Still, the brewing method may slightly impact the level of antioxidant activity in your java: A 2018 study found that hot brew coffees have more antioxidant activity than cold brew varieties.

Once again, the distinct brewing methods play a key role in how long your coffee will last after brewing. As hot coffee slowly cools down — as is done to create iced coffee — the java begins to taste a bit staler and the flavours mellow out, so it won’t be as delicious as it was when it was freshly brewed, according to Trade. Since cold brew can be created at super high concentrations (read: more coffee grounds in the water), though, the beverage stays fresh for about a week in the fridge, as the strength inhibits bacterial growth, says Phillips. “Once it is diluted, however, the shelf life drops precipitously,” he says. When you cut your cold brew with some water, cream, or alt-milks — which you’ll likely want to do if you’re opting for a high-strength brew that’ll take up less fridge space — the diluted drink will taste its best for just two to three days in the fridge, he explains.

So Cold Brew vs. Iced Coffee, Which one Should You Drink?

In the cold brew vs. iced coffee debate, there isn’t one clear-cut winner. Both cold brew and iced coffee have their perks, and there aren’t any real drawbacks — just differences, says Phillips. But if you’ve always been a die-hard iced coffee fan and have never channelled your inner barista to make cold brew, Phillips encourages you to give it a shot. “It is easy and delicious to make,” he says “You’ll be surprised at the results.”