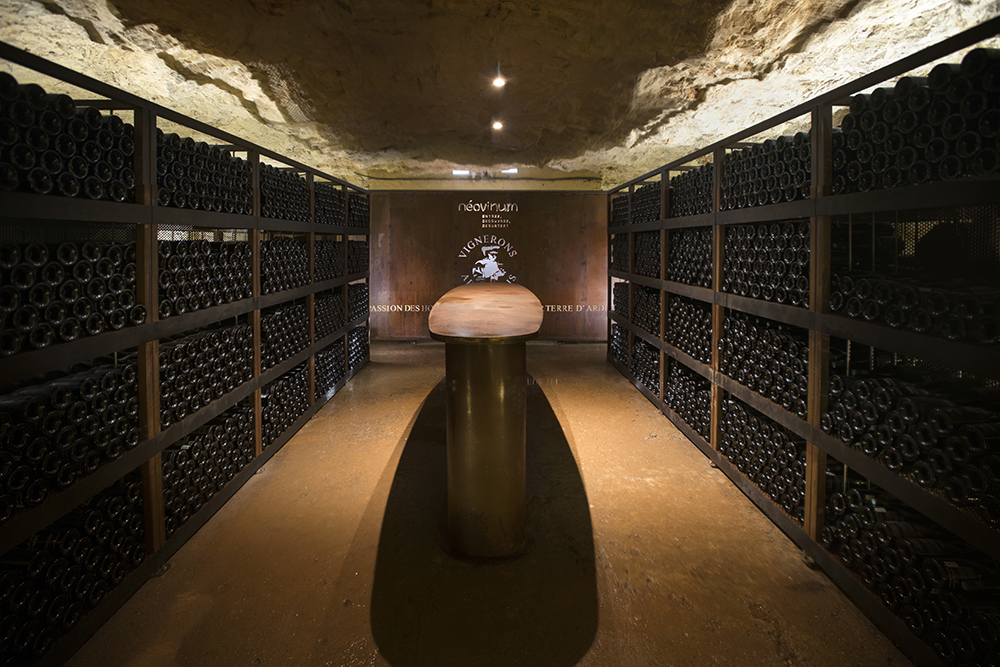 With their constant temperature of 12°c and an ideal rate of humidity, caves deep underground in France’s Ardèche region caught the attention of local winemakers who wondered about the possibility of using them to age wine.

To test out this natural cellar, they decided to store 10,000 bottles at a depth of 50 meters. Now part of this treasure trove is being brought back up to the surface for a dedicated tasting to be followed by an auction with highly affordable prices.

Some 50 meters underground, this is the depth that local winemakers chose when they decided to store 10,000 bottles in the Aven d’Orgnac caves, an underground tourist attraction located at the southern end of the limestone plateau of the Gorges de l’Ardèche. The experiment began in March 2018, when a new storage facility was specially created in a disused access tunnel to allow wine to mature in what amounts to a highly stable and peaceful environment.

A living product that ages best in undisturbed darkness, the wine will have benefited from ideal conditions: a constant temperature of around 12°C and an all-year-long rate of humidity of over 95%.

On December 12, 1,000 bottles of Côtes du Vivarais “Grand Aven 2017” from this treasure trove will be passed from hand to hand by a chain of human volunteers who will bring them back to the surface after two years underground. Thereafter, they will go under the hammer with a range of other local vintages in an auction with modest reserve prices. Lots on offer will include 150 magnums of Terra Helvorum 2017 starting at 30 euros, 350 bottles of 2015 Terra Helvorum for as little as 15 euros and 350 bottles of Grand Aven 2016 from just 10 euros.

These days, experiments to store wine deep underground are very much in vogue in France. On June 3 of this year, 500 bottles were placed in racks at a depth of 103 meters in caves in Padirac under the watchful eye of Serge Dubs, the Best Sommelier of the World in 1989. The first of these to return to the surface will be brought up for an initial tasting in the spring of 2021. And let’s not forget that this experiment is focused on a very particular wine: a Clos Triguedina Cahors, christened Cuvée Probus, which has been produced to honor the 130-year anniversary of the Padirac Chasm.

Surprisingly enough, this new approach to maturing wine was initially inspired by a find at sea. In 2010, divers in the Baltic discovered a wreck containing what turned out to be a cargo of champagne, which was probably on its way to 1840s Russia. The wave of experimentation that is now ongoing began when the bubbly, which was made by such houses as Veuve Clicquot, Heidsieck and the now defunct Juglar, was discovered to still be delicious after some 170 years under water.

In Saint-Jean-de-Luz in the French Basque country, winemaker Emmanuel Poirmeur has registered a patent for a process that involves vinifying wine in special vats at a depth of 15 meters under water. For its part, Leclerc-Briant set a record when it vinified one of its champagnes at a depth of 60 meters under the Atlantic in 2012, not surprisingly the vintage was christened “Abyss.”

Sign up to get the latest luxury and lifestyle news delivered to your inbox.
wine Auction Wine and Dine french wine
AFP Relaxnews
Wine and Dine