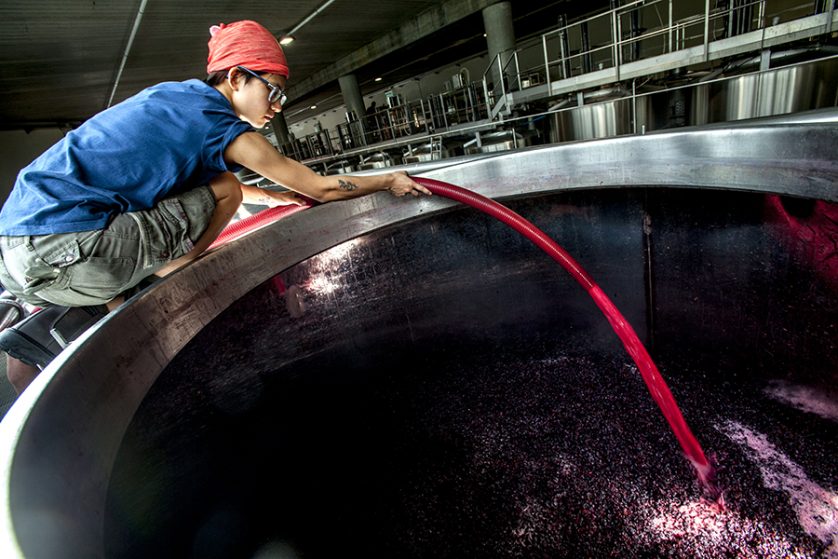 And that was how Eugene Mengyao Qiao ended up in winemaking rather than medical school. The Beijing-bred only child grew up with a dentist for an uncle and was told at a young age that the family needed a surgeon. Her grandmother was a nurse and pharmacist.

But a chance encounter with wine at 19 years old, while she was studying chemistry in China, offered another career option. “I went for a tasting where I got to taste some Argentine Malbec and was blown away – it smelled so good,” Qiao said.

10 years later, she’s making wine for G.D. Vajra, a family-run business in Piedmont, Italy. The winery was obviously impressed by her academic credentials. Qiao became the first student, regardless of race or gender, to graduate with full scores in exams and tastings, obtaining her master’s degree in oenological studies from the prestigious University of Turin.

And to think the Chinese national hardly spoke Italian when she first arrived in the country seven years ago. “I studied a little bit of Italian before arriving but the moment I touched down, I couldn’t speak or read at all. And the course was in Italian!”

Though, Eugene Mengyao Qiao picked up the language fast. All thanks to a few glasses of wine. “At the beginning, I felt lonely because I couldn’t communicate with anybody but since it was a small town, we had plenty of communal gatherings – my classmates and I went for dinners together and gradually, after a couple glasses of wine, I started to speak Italian and they started to speak English.”

But why did she choose Italy as a place to study viticulture in the first place?

Qiao explained it was between France and Italy. Both countries are rich in traditions and provide good education in viticulture and oenology, she said. “So, at a certain point, you’ve already done all your analysis – advantages and disadvantages, potential risks – and you have two choices. Both seem doable. It’s difficult to decide so you just flip a coin.”

However, her decision to join G.D. Vajra was more heartfelt. “When I graduated in 2015, I thought about moving to Australia but Aldo [G.D. Vajra’s owner] asked me to stay,” Qiao recalled. As it turns out, Aldo and Qiao would share many parallels in their life story. Both are graduates of the University of Turin, both grew up in the city – he in Turin and she in Beijing – and both eventually moved to the countryside. Qiao realised, “You can’t really choose where you are born but you can figure where you want to be.”

The 29-year-old also said she owes a lot to her boss. Considered one of the top Italian master winemakers alive, Aldo Vajra founded his winery in 1972 and named it after his father, Giuseppe Domenico. But Eugene Mengyao Qiao didn’t know much about her future mentor before she met him. And the lack of acquaintance was reciprocal.

“You can’t really choose where you are born but you can figure where you want to be” — Eugene Mengyao Qiao, winemaker at G.D. Vajra

“The funniest thing was Aldo thought I was a guy. This is because of my name, Eugene. So, when I turned up for the interview at the winery, they were expecting a guy.

“But after the interview, Aldo hired me. He asked if I had any other questions, so I asked whether he mind that I am a woman and he said: ‘First of all, you are a winemaker’. Or at that stage, I was a wannabe winemaker. But after years in the industry, I realised how important that one sentence was. Aldo established my confidence. He placed my identity first as a winemaker, for me to do my best and to do my job, no matter my gender or background.”

Nevertheless, it must be tough being the first Chinese woman winemaker to work in the cellar. Many would expect a lot of side eyes and noses up in the air, but it would seem wide eyes and wrinkled noses are more the case. Eugene Mengyao Qiao said, “Before they look down on me, I think they are first curious. And most of the time, their curiosity overwhelms them. They probably want to look down on me, but they just look at me and think, wow, that’s really interesting.”

“First of all, you are a winemaker” — Aldo Vajra, owner of G.D. Vajra, when Eugene Mengyao Qiao asked if he minded that she’s a woman

It seems that two presumed “negatives” equal a positive. Still, the female foreigner or self-professed honey badger has received rude remarks and felt angry over some of them, trying to prove them wrong. But eventually, she accepts the fact that there are just some people who are conservative. “I don’t want to change them to be honest. Yet, some of them have already been changed as they get to know more foreigners and female winemakers like me.”

Eugene Mengyao Qiao is definitely a role model. And we didn’t have to flip a coin to know that.