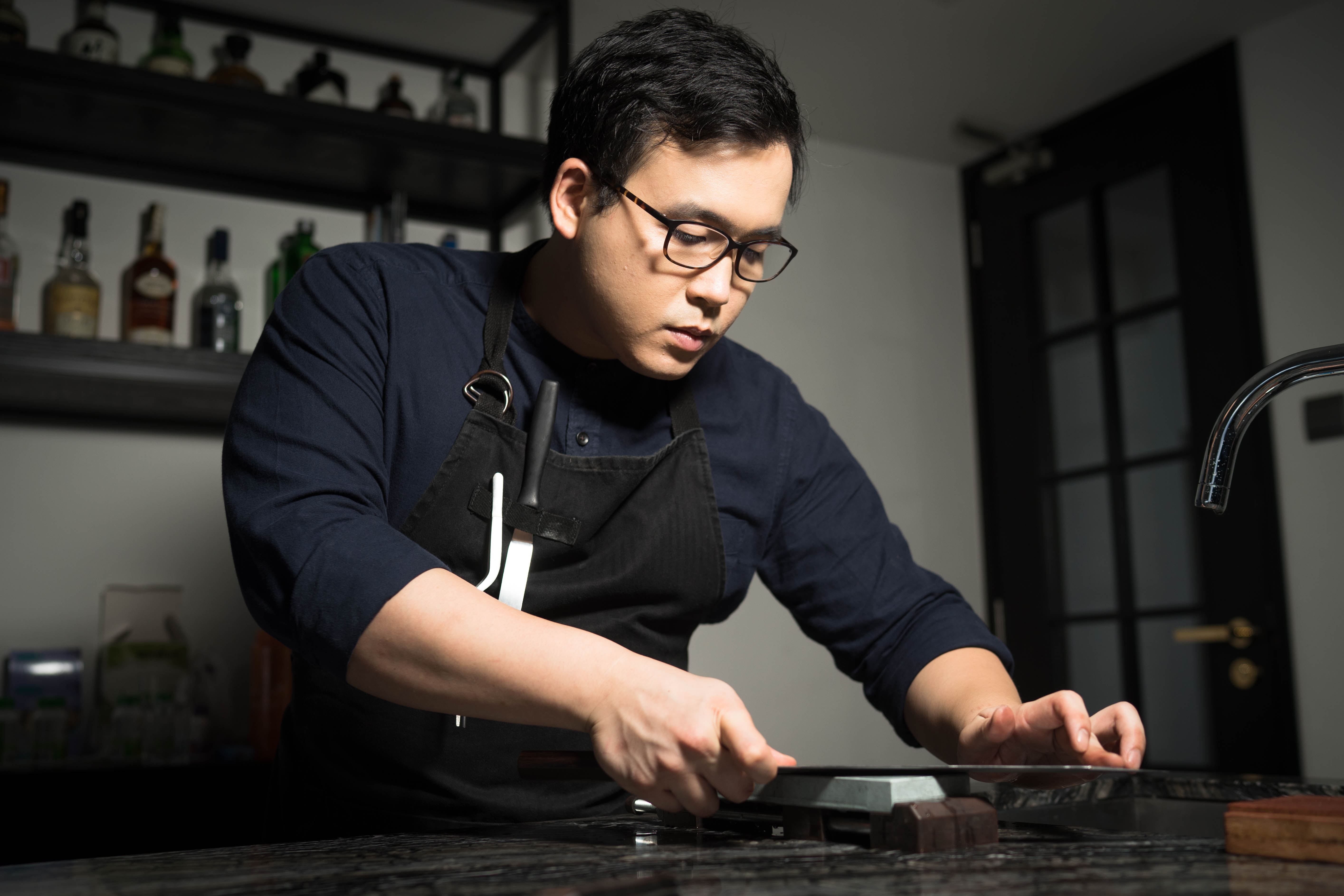 It’s been more than two years since Woo Wai Leong, a then 27-year-old lawyer-in-training from Singapore, took part in a Mystery Box challenge, whipped up a gastronomic full-course meal for celebrity chefs and pass a pressure test with “frying” colours to ultimately be crowned the first ever MasterChef Asia.

Nowadays, the 30-year-old knows exactly what he’s going to cook, whips up daily dishes for the picky dinner drove and is only under slight pressure to succeed with his first ever restaurant business.

Restaurant Ibid (a Latin word short for ibidem, meaning ‘in the same place’) sits in a shophouse that, in the distant past, used to sell dried seafood along North Canal Road. Woo Wai Leong kept the exterior’s old steel shutter gate, which is now more ornamental than functional. However, his cuisine is anything but old or ornamental.

It is contemporary Chinese cuisine — an alliterative astonishment. And there’s no molecular gastronomy rigmarole here. Woo’s ‘in the same place’ cooking simply seeks to imbue familiar Western techniques and his unique personal history into Nanyang-style dishes. Though it’s not as mod-Singaporean as we thought it’d be.

For starters, the shao bing, an unleavened flatbread typically found in Northern Chinese cuisine, makes an appearance. The nouveau chef’s iteration comes stuffed, with a winning mixture of spring onions, mozzarella cheese, and black pepper. And you must smear it with the rich yeasted butter topped with laksa leaf oil for a full burst of flavours.

Other highlights include the Tea Egg Soubise, where a sous-vide egg — reminisce of a good hanjuku — swims in a light Pu-erh tea broth; and the Ah Hua Kelong Grouper, which comes pan-fried to perfection and is served with a novelty but goldie, why-didn’t-we-think-of-it-ourselves tofu-butter sauce. Apparently, inspiration came to Woo when he was at home, blending tofu. Out of the blue, he decided to add butter too. The merry marry, which also includes mirin, shaoxing wine and sweet Japanese wine, is said to work best with fish. So the rest, as they say, is history.

But perhaps Woo’s pride and joy is his black garlic short rib. Having blurted out that he had a “short rib fetish”, Woo Wai Leong has showcased this dish in numerous versions at his pop-ups before settling down at his own restaurant. “I use short rib a fair bit because of my time on MasterChef Asia. Before the show, I had only heard of this wonderfully meaty and marbled cut that had texture on top of taste when harnessed properly. It wasn’t until I was on the show that I had the chance to cook a short rib and I jumped at the chance.”

At Restaurant Ibid, he cooks the meat over two days and serve it with a black garlic potato puree, charred black fungus, Chinese pear and an angelica root sauce, which Woo Wai Leong describes as “yum in your tum”.

Explain what being the winner of MasterChef Asia means to you.
It validates (in some ways) that I had the ability to cook under a high-pressure competition and television environment. It meant that I had some ability to combine flavours and work with strict parameters to bust out food. It also meant that I had an accelerated entry into the F&B and entertainment industry which is something that I am so very grateful for.

However, winning that show also meant that some people would always be watching for me to slip up and I had to be conscious of that. Opening Ibid was definitely a scary experience for me and I had to remind myself not to get too caught up in negativity because of a not-so-favourable review (thankfully few of these) or unreasonable guests (“You should make your restaurant wider, it’s too tight”).

Lastly, it also meant that whatever I did, I had to deliver a certain level of quality and consistency in my work. I’ve had to work hard and late to catch up to professionals who have leagues more time and experience in the professional kitchen. This has been an ongoing challenge that I both relish and fear similarly.

Why did you study law in the first place?
I chose to study law as I knew I did not stand a chance doing medicine (to take over my parents’ practice). My science and math scores were atrocious but I excelled at more humanities-based subjects. My young junior college mind deduced that law was thus the answer.

Nothing could be further from the truth! I was totally ill-prepared in the early months in law school. It took a while to reconfigure my mind to appreciate what it meant to read law but when things finally clicked, it was one of the best decisions of my life. The study of law isn’t just an understanding of legal systems and rules but also a transformation of one’s mind and logical processes. To never accept something as is and to always ask the right questions to get to the root of an issue, lessons like these have definitely helped even as I entered the world of F&B.

What made you then decide to join the cooking game show?
Simple, I was a hardcore fan of the MasterChef series!

After getting through the (untelevised) audition rounds, I didn’t have any grand plans to win the entire show. I wanted to enjoy the experience of being on MasterChef, the camaraderie, the kitchen experience, the pressure, the constant learning and the challenges, it was a bewilderingly beautiful time in my life.

It wasn’t until I had reached the top five in the show that I realised how close I was to the end. That was when I switched on and started to take the challenges more seriously with the intention to win.

SEE ALSO: How to eat fugu and live another day

You said one of your biggest regrets was not starting an Instagram account instantly, at the height of your TV fame. Any other regrets during those days?
Yes! Instagram is such an important tool to do business these days and for me not to have had an account up and running with content was a major mistake and regret for me.

I also regret entering the world of F&B with rose-tinted glasses and actually believing the people who told me to do work for “exposure” or for “future business opportunities” or “as a test”. I let my guard down and the years of legal training and education didn’t come into use.

What has the two years of doing pop-ups and travelling taught you?
My time travelling, doing pop-ups and working with different chefs has made it clearer to me what it is that I want to do, and what it is that I don’t want do. Ibid is an amalgamation of my collective experiences both at home and abroad. Travelling has reminded me of the importance of gaining perspective on your own work by experiencing both the old and the new of someone else’s culture. To experience vicariously the victories and defeats of other people’s journeys and then relating to your own. It’s not cheap to find the time and resources to do it but it has been an investment to my own growth and my growth as a young business owner in F&B. I highly recommend it.

Lastly, all the travelling and working with other people has taught me to be more human and more kind to others. The late Anthony Bourdain (who was one of the major reasons I joined the world of F&B) couldn’t have said it better: “Travel changes you. As you move through this life and this world you change things slightly, you leave marks behind, however small. And in return, life — and travel — leaves marks on you. Most of the time, those marks — on your body or on your heart — are beautiful. Often though, they hurt.”

What did you feel was missing from the local culinary scene?
What I once thought was missing in the local scene is (thankfully) getting more recognition. The identification and acceptance of young local talent is becoming more prominent. Places like my own, then Magic Square and Native bar are just some establishments that are testament to the acceptance of the new and the interesting. What we have is a generation of Nanyang-esque individuals who are combining their Western training with local or regional subject matter to produce dishes, drinks and experiences that are unique, no longer East nor West but Nanyang — ours.

Professional-wise, who do you admire the most?
Chef LG Han (Labyrinth) and Chef Ming Tan (Park Bench Deli) have been mentors to me over the past couple years and have guided me on countless occasions on grappling with work and life, and everything in between.

There are also other chefs, amongst others, like Malcolm Lee (Candlenut), Drew Nocente (Salted & Hung), Bjorn Shen (Artichoke) and Rishi Naleendra (Cheek by Jowl) who have been nothing but kind to me since I joined this industry, and for that I am eternally grateful.

I admire the strength of the bartending community in Singapore, specifically Louis Tan and Johan Foong, who taught me not just the craft of cocktail making but also the finer points of hospitality and to distil the joy out of serving others.

Do you have any words of advice for aspiring chefs, specifically the new MasterChef Singapore contestants?
Yes, to the future MasterChef Singapore contestants, this is going to be an exciting time of your lives, a time that you will remember for a very long time. Relish all the ups and downs of being in a televised, high-pressure environment like MasterChef, the friendships that you forge during the competition will be important in the future as you will rely on each other for support as all of you struggle to make your way in the hospitality industry.

For those of you who want to enter the professional kitchen, keep your head down, stay humble and work doubly hard, we as members of the MasterChef family have always had to go the extra mile to earn the respect of our contemporaries in the professional world, some who have been cooking for decades.

If you ever need some advice or just someone to exchange war stories with, I’m easily contactable. I look forward to meeting all of you after all the fun craziness that is the MasterChef experience is over, if you want to do a collaboration or a place to do a pop-up, I’m more than happy to have a chat.

Hold on and enjoy, it’s going to be a wild ride!

SEE ALSO: How Joshua Kalinan became the Sake Sommelier of The Year