How Float Therapy can Benefit Your Mind and Body 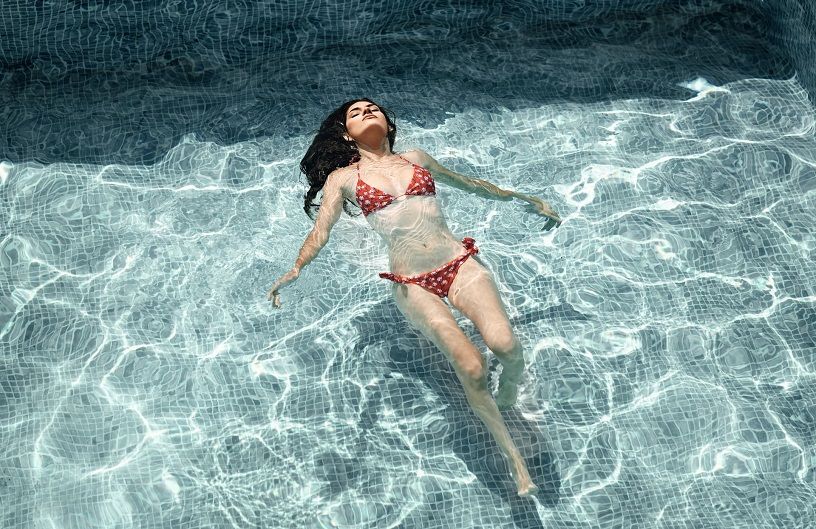 In case you missed it, Tia Mowry recently took her millions of Instagram followers along for the ride as she tried float therapy for the first time. In a series of Stories, the Sister, Sister star showed as much of the session as she could before closing the top of the futuristic-looking tub and taking some time to enjoy what she later called, “an incredible experience.”

About an hour later, Mowry reported back to fans, saying “I felt like I tapped into a different part of my brain and was so relaxed!”

Even if your heart raced a bit watching the actress close herself into the water-filled pod, odds are her raving review has left you wanting to learn more about the treatment. After all, who wouldn’t want to feel “so relaxed!” these days? Answer: No one.

Ahead, everything you need to know about float therapy, from the basics to the benefits.

What Is Float Therapy, Exactly?

Available at spas, float therapy is a wellness treatment that involves, as its name implies, floating in a tank (imagine a very large bathtub with a lid) that’s filled with water and Epsom salt, which provide buoyancy so you can float more easily. More often than not, the jumbo tub of sorts is a sensory deprivation tank, which allows participants to shut off any external stimuli (eg light, sound, even gravity) by closing the lid. This is also why float therapy is also known as restricted environmental stimulation therapy.

The idea is that by cutting off sensory input, you’re better able to relax and de-stress, which can not only benefit your mental health but also potentially ameliorate any stress-related health conditions (think: high blood pressure, muscle pain, tension headaches), according to research. That being said, “some people modify that and have music or may have a little bit of light, especially if they’re uncomfortable with the idea being closed in initially,” says Thomas Fine, MA, LPCC, an associate professor of psychiatry at The University of Toledo who has extensively researched float therapy. “But most people get used to that over time.” (You can also ease into the sensory deprivation element like Mowry, who kept the tank’s lid open until she felt ready to “really let go” and get the full float therapy experience.)

“The interior of the chamber is kept somewhere between 34°C and 34.7°C [which is the average external temperature of a person’s skin],” says Fine. “That temperature is what we call thermal neutral; the body doesn’t lose heat or gain heat in that environment.” Essentially, because the water temp matches that of your skin, you lose the sense of where your skin ends and the water begins — another element of sensory deprivation. Similarly, “the chamber is fairly humid, so it’s difficult to tell the difference between the chamber and air, from a sensation point of view,” adds Fine.

While there are no set rules for how you spend your float therapy session (which, BTW, typically lasts an hour), you’re encouraged to close your eyes and let your mind unwind — in any manner that works for you. Because there’s no background noise, some folks find it easier to practice meditation while in the tank, says Mandy Rowe, director of franchising at True REST Float Spa. Of course, this is all while you’re floating on your back (which, thanks to the heaping loads of Epsom salt, should be super doable).

“Being in this type of environment, with no light and no sound, fully supported and thermal neutral, will get the body’s stress response system to move to its lowest level of operation,” says Fine. “The muscles will completely relax, and the cardiovascular system will go into a very low level of operation. Blood pressure drops to a low baseline level. It feels very, very comfortable.”

And unlike when you’re floating in a pool, you shouldn’t need to call upon your muscles to keep you afloat due to the buoyancy of the Epsom salt and water solution; this makes it that much easier to truly get rid of any muscle aches. What’s more, Epsom salt in and of itself is believed to reduce or even eliminate muscle tension. Research suggests that, when absorbed by the body, the “high concentration of magnesium sulfate from the salt dissolves lactic acid,” which can buildup in muscles (such as after a strenuous workout) and cause soreness. That being said, to what extent the Epsom salt from the tank can be absorbed through the skin is still unclear. All of this muscle relief — alongside the “induced relaxation and stress reduction” — might also play a role in easing chronic pain in people as well, according to a 2014 study.

In addition to effectively reducing stress, float therapy “may be a good option for those grappling with symptoms of anxiety [and/or] depression and other ongoing mental health struggles,” notes Nesochi Okeke-Igbokwe, MD, New York City-based internal medicine physician and health expert. Preliminary research has shown that floating therapy may reduce stress, anxiety, and depression by reducing how much sensory input the brain and nervous system receive, according to the University of Washington Medicine. These effects might also be due to lowered blood pressure and heart rate caused by the treatment, as these both have been linked with reduced stress and symptoms of anxiety. As for depression? A 2018 study found that a 60-minute float therapy session induced a “substantial improvement in mood in a group of 50 anxious and depressed participants.”

And need not forget about the overall relaxing effect of float therapy — something that can definitely play a role in easing anxiety, depression, and stress and, interestingly enough, linger long after you’ve stepped out of the tub, says Fine. “Learning to be able to be in this kind of [relaxed] state and doing it regularly will tend to affect other stress factors,” he explains. In a (rather old) study conducted by Fine, participants experienced a reduction in their levels of cortisol (aka the stress hormone) even on the days in which they were not practising float therapy.

Who Should and Shouldn’t Try Float Therapy

“Anyone dealing with stress, anxiety, depression, [and] chronic pain are ideal candidates. We also recommend floating for anyone who might not have one of these conditions, but is looking for a quiet environment to meditate,” says Rowe. “We encourage pregnant women to float as it can help with muscle aches and pains, but highly encourage them to speak with their doctors before trying.”

That being said, while floating therapy is generally accepted as safe, the treatment is not for everyone, such as those who have uncontrolled disorders that might cause them to lose unconsciousness at any point during the treatment. For example, folks with epilepsy should probably steer clear of float therapy (unless otherwise cleared by their doc, of course) due to the risk of having a seizure while in the tank, according to all three experts.

Because the tanks are filled with hundreds of pounds of Epsom salt, anyone with open wounds or ulcers should also avoid float therapy, as the salt can irritate wounds. “You could have a skin reaction to the solution,” adds Fine. “If you’ve shaved recently, you can have a stinging reaction.” And no one should be floating while under the influence of alcohol or drugs.

“It would not be a good option for someone who is claustrophobic and might panic in enclosed spaces,” says Dr Okeke-Igbokwe. But if the thought of being stuck in an enclosed space makes you nervous, consider this: “You can choose to leave the pod door open or closed to reduce anxiousness,” says Rowe. “Any guest can step out of the pod at any point during their session.”

That being said, “to get the true sensory deprivation experience, which has the most significant benefit, the lid should be closed,” she adds. “However, if that causes any kind of nervous tension to the client, I would recommend leaving the lid open for the first float. They will still get the antigravity experience [and] some quiet, alone time, which is hugely beneficial.”

The bottom line? Float therapy appears to be safe for most — but checking in with your doctor is always a good idea, particularly if you have any health concerns.

What Else to Know Before Trying Float Therapy

“One limitation is that treatment may be expensive and not covered by medical insurance, [so] some patients may opt-out of moving forward,” says Dr Okeke-Igbokwe. With that being said, with additional research on its benefits in the future, float therapy could eventually become covered by insurance, according to Fine. But, unfortunately, that’s not the case as of right now.

While pricing can differ based on location and length of treatment, a 60-minute session, for example, will likely run you USD 65 (THB 2,163) for your first session and USD 89 (THB 2,962) for any subsequent ones. The spa may also offer various membership options for anyone who would like to float regularly.

Speaking of floating regularly, there’s no set number of times of frequency someone “needs” in order to benefit from float therapy. Fine suggests floating two or three times a week at most — which certainly may not be feasible (financially or due to time constraints) for many people. While a single session probably won’t be enough for an ongoing condition such as anxiety or chronic pain, even one trip to the tank can be an incredibly relaxing way to unplug.

Luckily, there’s a way to keep the effect going when you can’t hit the tank. “You can mimic the situation outside of the tank,” says Fine. “You can lie on your bed, put a pillow under your knees and head, turn the lights off, and imagine you’re in the tank. After you’ve had a few experiences in the tank, your body is going to react in a similar way when you do it outside of the tank.”