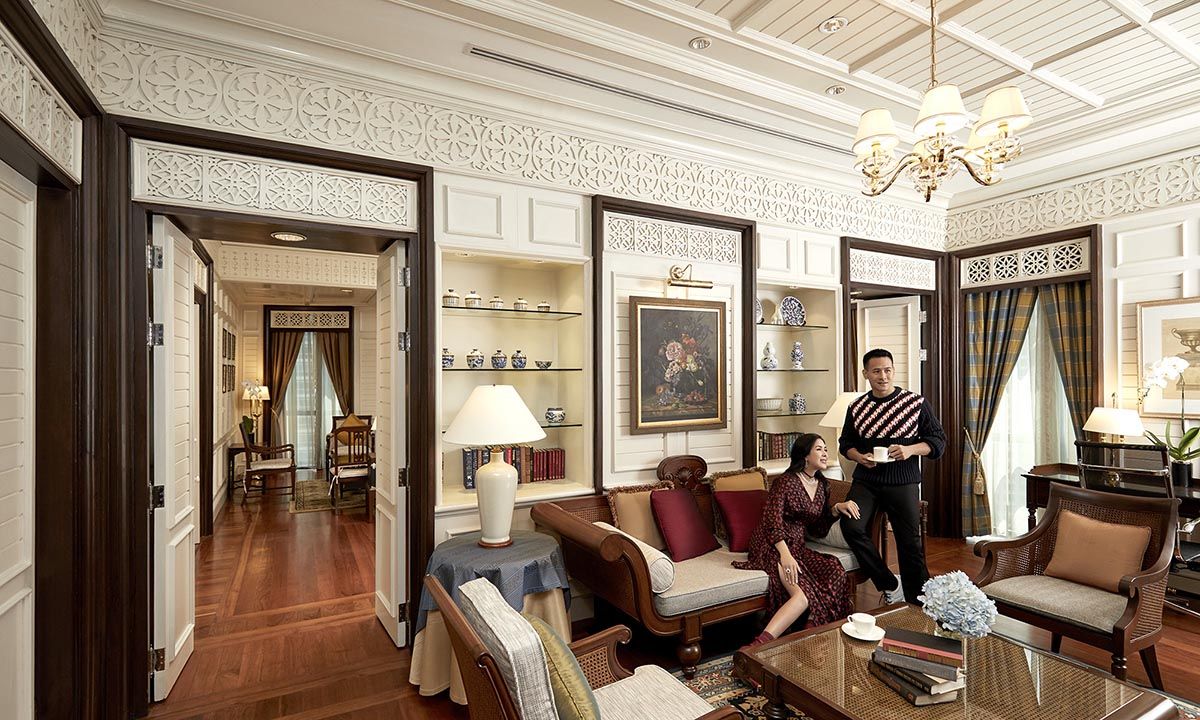 Just when two of Bangkok’s most eligible singles had almost given up on love and finding their soulmates, the paths of Janista “Bam” (formerly Lewchalermwong) and Butrrat “Bote” Charoonsmith crossed. The attraction was instant, and in no time a relationship blossomed. Today, they are married with two young children – and the rest, as they say, is history.

“We both attended Patumwan Demonstration School,” recalls Bam. “We both love the tonkatsu at Misato in Bangkok and had dined there very, very often, but never actually met. Not even once. Until one night at Wine Bridge, when I spotted this attractive man standing outside. It must have been fate because a little later on, to my pleasant surprise, we were introduced through mutual friends.”

It was her first night out in years after working long hours as party spokesperson and MP for the Chart Thai Party. The political turmoil in Thailand at the time put her career in politics on hold, and as she was figuring out her next move, Bam soon found herself in whole new roles – that of wife, mother and also restauranteur.

“I had been a busy working woman all my life. I was never out of things to do,” Bam says, alluding to her successful careers as policy and plan analyst at the Office of National Economic and Social Development Board, a host for a popular TV variety show, At Ten, and her prestigious position in the Chart Thai Party.

“At the time I was already 36 and somehow had given up on marriage. But then I found love, and my life took a turn in ways I could never have imagined.”

The complete package of looks, intellect and charisma, Bam has long been admired in the social scene and by the public as a role model for the modern working woman. She is the eldest daughter of famed architect Akom Lewchalermwong and M.R. Siriyada Varavarn. Her younger siblings include model and TV personality Chayada “Bo” Svetanandana and Sunuchada Lewchalermwong.

“I come from a big family,” Bam says. “I also have two other half-siblings from my mother’s second marriage, Chavit and Thanujdee Seriwatthanophas. We have lots of relatives and spend a great deal of time together, even now that I’m married and have a family of my own. I’m very close to my father, mother and all my siblings, and we get together very often.”

Sweet and nurturing Bam, 45, found a perfect match with pragmatic Bote, 48, who is the founder and CEO of Silkspan, one of the earliest so-called financial supermarkets in the world.

He has a Bachelor’s degree in Civil Engineering from the University of Colorado Boulder and previously worked as design engineer for a few years, before shifting to finance and earning a Master’s from Sasin Graduate Institute of Business Administration, Chulalongkorn University.

Prior to setting up his own venture, his last role was that of senior associate at Merrill Lynch (Asia Pacific) in Hong Kong – a position so prestigious that it came as quite a shock to everyone when he resigned.

“I earned a lot of money and life was very comfortable, but I was not happy,” the visionary businessman says.

“I was a consultant but deep down I knew I was more of a ‘doer’; I felt empty with that job. Back then the retail food industry in Thailand was shaken by the emergence of global grocery retailer chains like Tesco, where they attracted people with the idea that they could find everything in one store. Then I thought, what about financial products? I jumped right into the idea of a financial supermarket, which was unheard of at the time, and soon Silkspan was born. It has been 17 years now.

“People thought I was crazy to leave such a high-paid job in a world-renowned firm to start something completely new. But I trusted my gut. From one employee – me – we now have 700 staff members and have served more than two million customers.

“There is no shortcut in this kind of business as it is heavily controlled and regulated. It has not always been easy, but I am very happy. To me, Silkspan is already a success. It fulfils me, and it gives me so much joy that I can also give jobs and new career opportunities to a lot of people.”

When Bote proposed to Bam, he was expecting his wife to stay at home and raise the family. But seven years ago, soon after their first child, Vanista “Venice”, was born, Bam ventured into her own restaurant business, Audrey Group Inc. Bote was surprised at first, but gave his wife his full support.

“Bam always liked arts and crafts, and she is an excellent cook,” Bote says. “She knows what kind of food I like and she treats me to great home-cooked meals all the time. I’m very particular about my ribs. I like them succulent and slide-off-the-bone tender. Bam tweaked her recipe numerous times to get it right and now makes the perfect ribs for me.

“She’s very determined. When she came home one day and told me she wanted to open a restaurant, I knew she had the potential to do it and that she would be successful.”

“It happened really fast,” Bam recalls. “I saw this house on Thonglor. It was up for rent, and just across from where we live. I struck a deal with the owner on the same day to rent the space, and the next thing I know, I’m a restaurateur with eight branches, and also doing catering and delivery services. We are now in our sixth year,” she says.

When there are two CEOs in the house running successful businesses, one might assume that there’s limited hours in the day for family time, but it’s not the case for the Charoonsmiths. Now parents of two, with five-year-old Narathippong “Vince” being the last addition to the family, Bam and Bote manage their work schedule efficiently so that there’s time to fit it all in.

“Everything is in the same neighbourhood – the kids’ after-school lessons, my office, Bote’s office and our condo. This saves so much travelling time,” Bam explains.

“Bote and I often see each other for lunch. I send the kids off to school myself every morning and see them again when they attend their after-school activities near my office. I can leave them there with the nannies and come back to work. By the time the kids come home, I’m there to be with them. We’re not the kind of parents that come home late at night and only hang out with the kids on weekends. We spend a lot of time together, every day.”

Apart from Saturday lunch at Misato, which is still their favourite tonkatsu haunt, the four often enjoy a film at home in the movie room. Venice, when not practicing figure skating, likes to cook and do crafts with her mother, while Vince enjoys ice hockey with his dad.

Bote is a fitness and sport enthusiast, who enjoys running, polo, boxing and flowboarding. Occasionally, the family take trips together both in Thailand and abroad, such as Hua Hin, Pattaya, Chiang Mai, Paris, Los Angeles and sometimes Tokyo and New York.

“We both come from rather liberal families, so we tend to give our own children freedom to decide for themselves,” Bote describes his parenting style.

“Many times I’m scared that they might make mistakes and I could not protect or help them. I think this is how my parents felt too when they were raising me, but they had to choose between pampering and letting go. Bam, on the contrary, is very cautious and careful. So we really balance each other out.

“I knew that I married the right woman when I saw how Vince, our youngest, behaves,” Bote adds. “He’s very sweet and kind and always thinks of other people’s needs. Whenever he hears Bam in the shower, he rushes to our bedroom to prepare pyjamas, night cream and eye cream for his mother. He does that without anybody telling him to. It’s in his nature and he must have gotten it from Bam. A good heart is the best quality you could ever wish for, and I consider myself very lucky to have met Bam.”

Even though both Bam and Bote are hard at work and devote themselves entirely to family, they never forget to find time for “just the two of us”, occasionally with romantic dinners at Le Normandie at Mandarin Oriental Bangkok. Other than that, Valentine’s Day included, the couple keeps it simple.

“Bote is generally not a very romantic guy, although he has done several romantic things for me,” Bam says, blushing. “One example that always comes to mind is when we first started dating, and I had to be in San Francisco on a long business trip. We Skyped every day and agreed to go on a second dinner date once I get back, but he later cancelled the plan. I was so confused and disappointed at first, but the following day he took a flight from Bangkok to have dinner with me in San Francisco!”

The low-key power couple are rarely seen in the limelight nowadays, but if they are, they often make a grand entrance with understated elegance and unique style.

“I don’t give much attention to brands at all. I even make my own clothes sometimes,” Bam says. “My style is more mix and match, so I love outfits with good quality fabrics, nicely designed scarves, accessories and shoes. It doesn’t have to be a high-end brand. I value anything with a unique design that matches my personality.”

A sport lover, Bote’s favourite brand is La Martina from Argentina ever since he started playing polo. “The brand is not that well-known here but I don’t mind,” Bote says. “I don’t really care at all if anyone knows what brand my shirt is from. If I like something and it is good quality, I’d buy it. For most people, luxury means expensive, but for me it’s about quality. And high quality does not always come with a high price.”