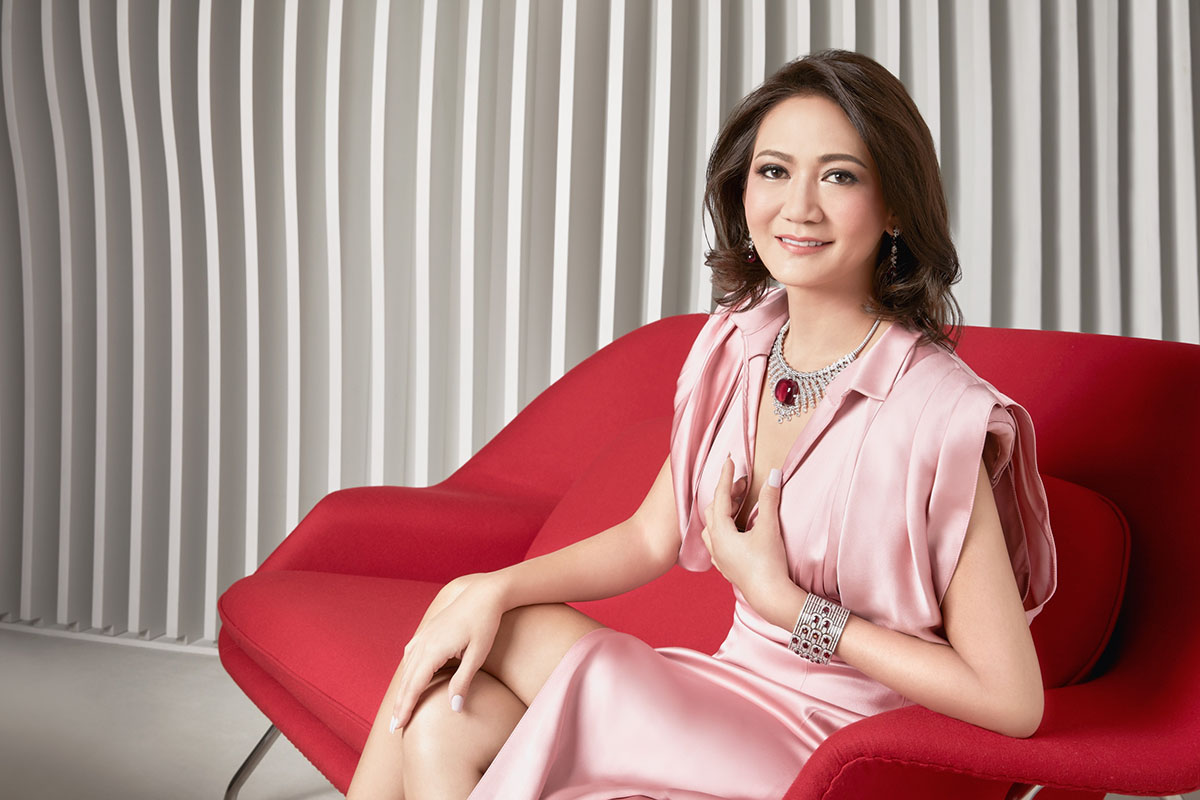 The metal pins in Churairatana “Nui” Bhirombhakdi’s left palm clank as she rolls them around and talks about the previous night’s surgery. “The surgeon at Bumrungrad just removed this one yesterday. It was starting to poke out of my wrist.” She chuckles at it as if it were a naughty child. The other pins are remnants of previous surgeries – a misbehaving cohort, as it were.

Nui’s list of surgeries is extensive (eight, just counting major procedures). Yet she carries her compact frame with purposefulness and takes these complications in her stride. She has often strutted the red carpet at posh events post-surgery – once with a gorgeous, lace-adorned cast, a perfect match for her outfit. (“Still gorgeous, even injured!” crowed the next week’s society page headline.)

This summer, she took a jet-set trip to Italy with her triplets, where she stayed at all the hottest spots, sporting a tan and bikinis on Amalfi coast cruises and wandering Venice in a crop top and chic shorts – barely weighed down by a cast. Then there was a visit to a southern Thai beach, one of her favourite spots.

And now that that pesky pin is out of her wrist  bone, she’s headed back to the gym in a few months, to continue her weekly weight-training routines.

“My personal trainer’s going to be so afraid of pushing me too hard,” she laughs.

Nui’s family, the Bhirombhakdis, is one of the most powerful in Thailand. The daughter of the late beer tycoon Chamnong, she carries a last name that is instantly recognised in business and political circles.

The huge Bhirombhakdi family are widely known for Boon Rawd Brewery, the producer of Singha, a pale lager perfect for pouring over ice, Thai-style, on sweltering evenings. They’ve diversified into other beverages and businesses, and even a fashion lifestyle brand. They span the political spectrum – ministers and bureaucrats, CEOs and chairpersons.

Even during her brief respite from this name during her past marriage, surname celebritydom followed her because her ex-husband is a well-known, royally-affiliated Diskul.

All that doesn’t really tell us much about Nui, though, besides how heavily her family privilege has imprinted itself upon her life.

Born in Bangkok, Nui grew up in a large family, the youngest daughter of Chamnong and Khunying Supachari. As is typical of prominent Thai families, she spent the latter years of high school abroad, living in New England for a total of eight years and graduating from Boston University with a Masters of Fine Arts in Graphic Design.

She joined Leo Burnett, an advertising firm, as a graphic designer.

“When I first started at Leo Burnett, there was a welcome party. The office was at Phetchaburi [Road], near the bridge, where there was a rice noodle place that used the canal water for its broth. They celebrated my arrival by taking me to go eat there, all 20 of us in the department. We took the bus there, to test to see if I could do it. I could do everything. Then we took a tuk-tuk back. We ended up with everyone having an upset stomach, except for me. People thought I was spoilt,” she says. “Even when they didn’t know me at all.”

She married MR Damrongdej Diskul, who is the grandson of one of Thailand’s most venerated academics, Prince Damrong. Her next position was at Boonrawd, the Bhirombhakdi family’s company, a position she resigned from after less than a year when she fell pregnant with triplets.

The pregnancy was risky, and she was confined to bedrest during the latter portion. She curtailed any sort of physical activity – even stairs or walks outside were eliminated. One day, she noticed blood. She was miscarrying.

“The doctor said there were still three, so the miscarriage was a fourth fetus that they couldn’t even detect. It was actually fortunate, because if all four were still there, they might have all miscarried because I’m so small.”

The triplets were born premature and underweight.

“It was a difficult time. But I enjoyed it. I was looking forward to having my babies. [Doctors] had me stay in bed, and I did. They wouldn’t let me use the stairs. I ate in my room. If I had to go downstairs for a doctor’s appointment, someone had to carry me in a chair.”

She took this, too, in stride and dedicated the next seven years to caring for the triplets – M.L. Churaimas “Auey” (the “eldest”), M.L. Rajdamrong “Towe”, and M.L. Pongpatanadej “Tri” Diskul – as a full-time mother. They are healthy, successful and nearly-graduated now at 22 years old.

The three are incredibly close with Nui. Auey, the eldest, completed a degree in graphic design, like her mother. In September, she took on her first job in marketing at Ogilvy Mathers.

“I can tell from the way she talks about it, she seems to love it,” Nui says. The two have a playful relationship, and Auey still sleeps over once a week.

Towe, her middle child, is studying a five-year degree in nano-engineering at Chulalongkorn University. “I’m not too worried about him; he’s so mature,” she says. “He’s trying to save up.”

The youngest, Tri – “He’s very similar to me – he loves dressing up. Loves buying shoes. He’s always wearing his grandfather’s watches.” – is in London studying for a master’s degree in management. “I worry about his safety, especially since the terrorist attacks. When he takes trips, I worry too. I’m not worried about if he’s eating well and taking care of himself; he knows how to survive.”

Testament to how close they are, Nui now says she often consults with her children for advice. A role reversal from just a few years ago – when the children were seven, she turned her focus to taking care of her ageing parents.

Nui exited her marriage seven years ago and says she hasn’t looked back since. “My life changed for the better,” she says. She is delighted to have more time for herself after years of taking care of family. Her mother is healthy and strong, and they are often spotted out together.

A leisurely day includes lunch at Central Embassy’s Eathai, followed by a social occasion with close friends. Workouts are on Tuesdays and Thursdays. She admits to choosing to only attend events for brands she feels close to.

For now, Nui has taken up temporary residence in a quiet apartment in Sathorn while waiting for her luxurious two-storey house nearby to be finished in 2020. She’s content to hand the reins over to her designers, with the only specific stipulation being a generous space for her favourite fashion items. “For sure [the designers] are going to have fun making my walk-in closet!”

Often photographed in Prada and Dior, Nui exudes a restrained, understated glamour, always tasteful and feminine, often colourful. “Luxury takes into account the total outlook – it must be beautiful…it must be simple. Elegant. Chic,” she explains.

She credits her mother with developing her sense of style. “From my mother, I learned polite and proper dress. When attending an event, your attire must suit the occasion and be beautiful – it’s all about tastefulness. My love of jewellery also comes from her.”

Her recent visit to Nara, Japan, to attend the Résonances De Cartier high jewellery event and do an exclusive photo shoot for Prestige, however, may have swayed her from her understated path. It seems to have unearthed some rather more indulgent desires.

Pointing to a 10-ct diamond ring worn in one of the shoots, she exclaims, “I love this one – 75 million Baht! It’s on my wish list.” She goes on to point out a few more items, all of them one-of-a-kind pieces. “The problem with me is I have a terrible eye. I always only things that are just much too good,” she laughs.

And if it’s a limited-edition item? Like her father, from whom she inherited a love of watches, Nui simply must have it. Cartier’s Crash watch, inspired by Salvador Dalí, was an instant must-have for her. “There’s just nothing else like it.”

As for her ever-fresh look, Nui credits vitality experts, exercise and plenty of sleep.

“I believe that beauty begins from within. We need vitamins and supplements. I do blood tests to uncover any deficiencies, and the doctor will offer supplements as a way to combat ageing. To take care of myself externally too, I do facial treatments once a month.”

More than being remembered for her fashion acuity, Nui wants to make a mark in other ways as well.

When her father passed away two years ago, though she had cared for him for decades, she began to discover how little she knew of his philanthropic pursuits. She had helped establish a foundation in his name with the few million Baht in donations received during his funeral to donate to hospitals and temples, as well as provide grants for schools and sports.

Then the family began receiving letters.

In fact, Chamnong had already been helping to pay for heart surgeries for children, from valve repairs to transplants. “I had no idea,” she says, “and I keep finding out more and more after he passed away. We were receiving letters saying, ‘My child is only alive because of your father.’

“My father taught me three things. Don’t be late. Don’t gamble. Don’t be careless with your possesions,” she says, adding that she’s passed this onto her children as well.

“I want people to remember me as someone who is easy-going, who doesn’t put on airs with her name…someone kindhearted, who helps people. I want to follow in my father’s path.”