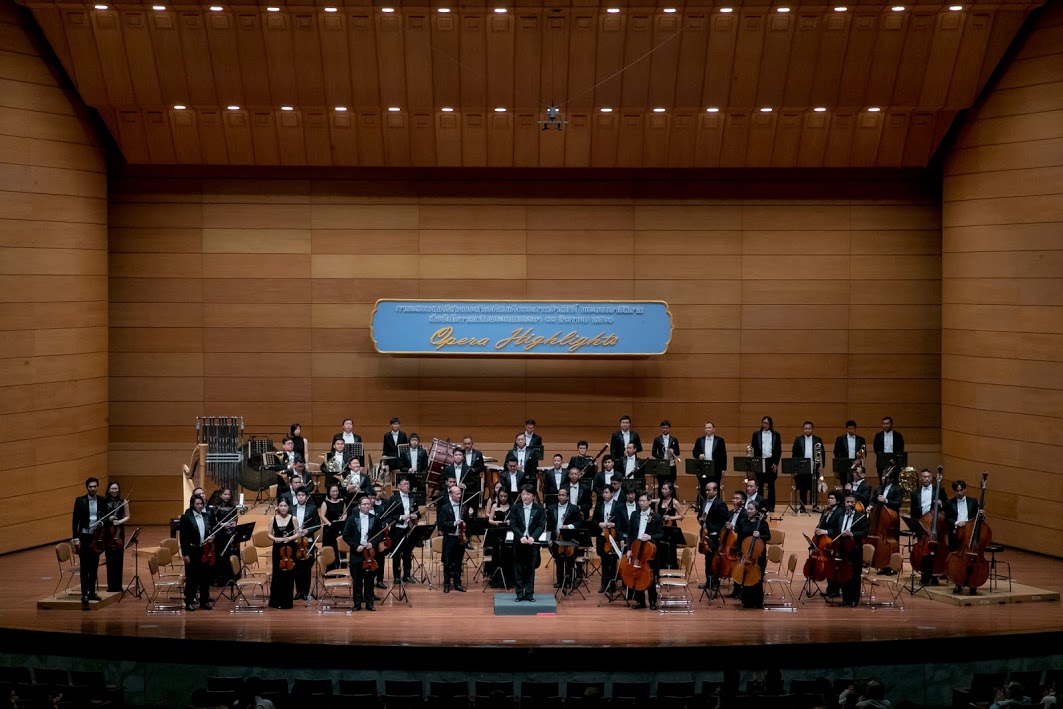 By Alisha Pawa
Presented by B GRIMM GROUP

Classical music is an art form that never fails to create a glorious experience for us listeners as we marvel at the sheer beauty of unfolding layers of harmony and melody. Keeping this performing art alive is the Royal Bangkok Symphony Orchestra (RBSO), who this week presents a ‘Romantic Piano Celebration for the Queen Mother’. This not-to-be-missed musical event will honour Her Majesty Queen Sirikit, and features symphonic works from the Romantic era such as Felix Mendelssohn’s concert overture The Hebrides, Edvard Grieg’s piano concerto in A minor Op.16, and Robert Schumann’s Symphony No.1 in B-flat major.

The prominent Japanese conductor Koji Kawamoto – winner of Tokyo International Music Competition, the Slovak Philharmonic Orchestra, and the Prague Radio Symphony Orchestra, to name a few – has been successfully conducting the RBSO for the past two years, and the orchestra will be under his baton for this special evening of music. Kawamoto shares a bit about his journey with RBSO, and his appreciation for the devotion of the performers.

“My first collaboration with RBSO was a concert tour in Japan, at Suntoty Hall, celebrating the anniversary of 130 years of diplomatic relationships between our countries. I’ve been coming to Thailand for concerts with RBSO every year since then. I am very satisfied with all the concerts we’ve collaborated on, because of the compassionate atmosphere during the rehearsals, and the deep concentration and dedication of the highly qualified musicians during the performances,” said Kawamoto.

The highly acclaimed German-born pianist Severin von Eckardstein, who will be the special guest soloist at the concert, fell in love with music at the age of 6 and has been playing the piano ever since. He has won several noteworthy international competitions, including the Leeds International Piano Competition and the Grand Prix International Reine Elisabeth in Brussels. He has also performed at numerous music festivals, and his concerts have been broadcasted on television. RBSO’s upcoming concert will mark Eckardstein’s debut in Thailand, and he shares with us his inspiration behind playing the Grieg’s concertos. “Grieg has always had an important place in my piano concerto repertoire. His music is pure, fresh, brilliant, and never loses its specific longing Nordic tone,” said Eckardstein.

Eckardstein also shares his experience of performing globally. “Each concert is still a challenge, even if you come back to the same hall and know already about the atmosphere. I’ve performed mainly in the Netherlands, where I have an active agent and people appreciate my art, and also in Belgium and Germany. I play regularly in Southern Europe too, and sometimes in the States and in Japan and Korea. While long plane journeys have become a bit more tiring now, travelling also brings me memorable experiences. I enjoy having the opportunity of playing in such far flung countries, especially in South Korea where people, especially the younger generation, really love classical music,” Eckardstein went on to say.

With two big talents under one roof, we are definitely going to hear some wonderful classical music, presented with a contemporary approach that will strike a chord with listeners. Those in attendance can expect a soulful performance by this international duo that will not only be enlightening, but will remind us what pure classical music is all about.

Sponsored by B Grimm Group, under The Royal Patronage of Her Royal Highness Princess Sirivannavari Nariratana, and with the support of the Tourism Authority of Thailand (TAT), the Royal Bangkok Symphony Orchestra has continued to thrive as the biggest professional orchestra in the nation.

The ‘Romantic Piano Celebration for the Queen Mother’ will be on August 22, 2019 on 8pm at the Thailand Cultural Centre. To find out more or get your tickets, visit Thai Ticket Major. For more information about RBSO, visit bangkoksymphony.org

Alisha is an online content creator for Prestige Online. She loves to dance to the latest pop tunes, enjoys a hot brew while reading rom-com novels, and is always on-the-go for her midnight chocolate cravings. During her personal time, find her creating dance choreography for her next dance cover. She hopes to host her own travel show one day.
Arts and Culture travel people events property