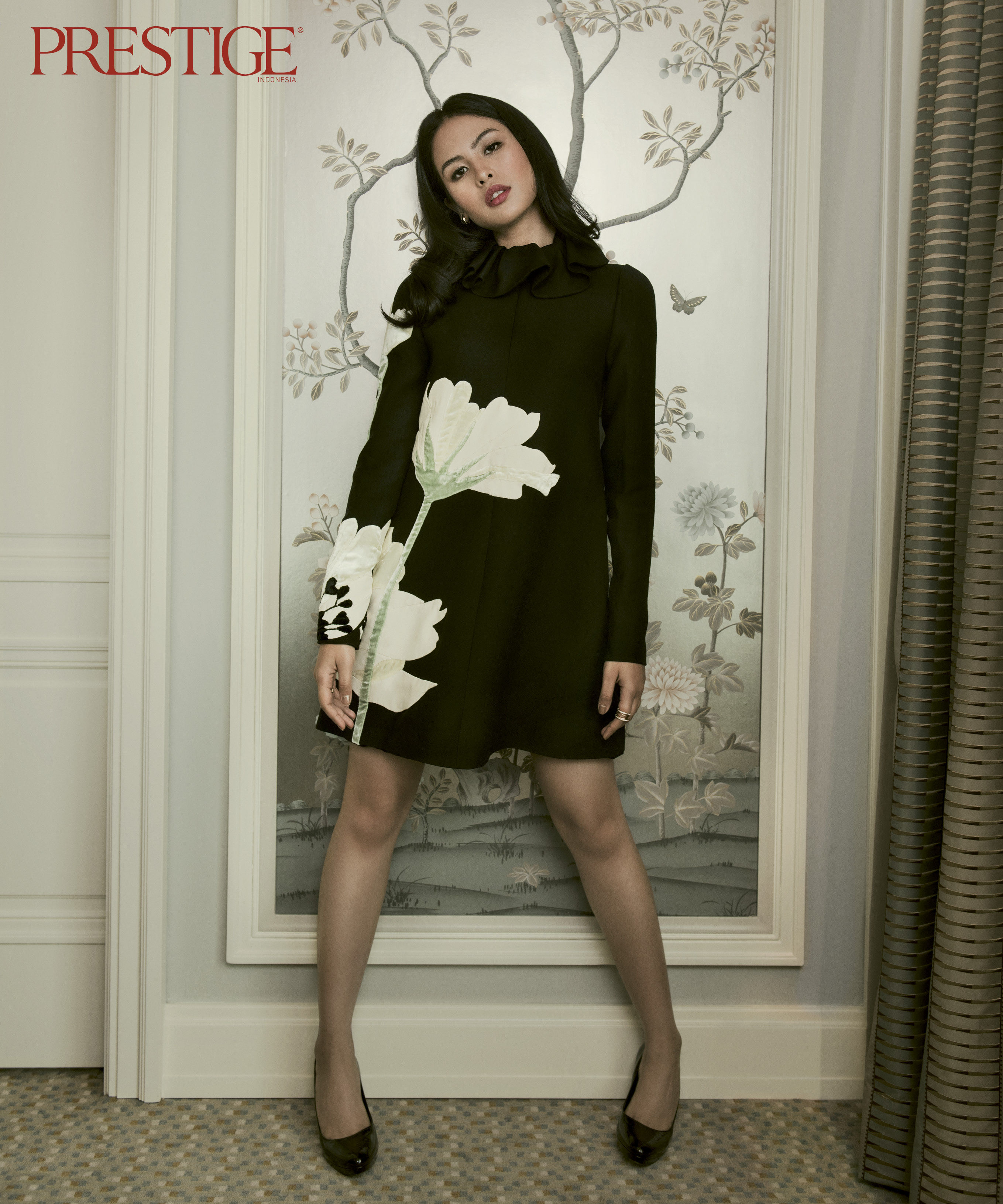 “I enjoy philosophy. It’s like going back to zero, evaluating our own prejudices, our own thoughts,” says Maudy Ayunda, actress, singer-songwriter, activist for youth causes and, now, best-selling author – all at the age of 23. Ajeng G. Anindita reports.

Her big break came when she starred in – and sang the title song of – Perahu Kertas (2012), a film adapted from a novel by renowned author Dewi Lestari. But not many people know that writing has been a huge passion of Maudy’s ever since she can remember. She wrote her first novel at the age of 10! That particular volume hasn’t been published – yet – but Bentang Belia has released Maudy’s Dear Tomorrow: Notes to My Future Self. It’s selling like the proverbial hot cakes, already into its fifth printing.

“It’s a self-evaluation and self-reminder book for myself,” says Maudy, whose major film debut was in Untuk Rena (2005), acting alongside Surya Saputra. “There are stories in the book about my journey and my life, but there are also messages for me in the future. At the same time, youngsters who read this book can hopefully relate to the stories and learn something about themselves too.

“When I was studying at Oxford, I had to write two essays per week, each of approximately 2,000 words. I had a big reading list, but it wasn’t enough. I had to read a lot more besides. I feel that that experience trained me to be able to internalise a great deal of information. It also taught to write and think critically. That’s why, in this book, you will see a lot of my thoughts that I have been gathering ever since. And because of my background, you will see a lot of deep thoughts that are quite philosophical. I enjoy philosophy. It’s like going back to zero, evaluating our own prejudices, our own thoughts.”

“Based on what I experienced at high school and in university, having direction is really important for young people” – Maudy Ayunda

Maudy says she has changed a lot because of studying abroad and that the experience has made her a better person. “I feel like I had a lot of personal growth. Before going to Oxford, I had never lived abroad. I have a lot of non-Indonesian friends since I went to an international school in Jakarta, but that’s different compared to actually living abroad in a place where no one speaks your language. None of my peers at university were Indonesian, so I was thrown into an environment that was very foreign to me.

“On top of that, my studies encouraged me to be very critical and open-minded. I questioned a lot of things in my life. In order to get the answers I needed, I had to be open-minded and to accept change. But I also learned to be more comfortable in my own skin, and more independent because I had to do a lot of things on my own.”

The book is only one of Maudy’s achievements this year. Her latest album, Oxygen, came out this March. It received a lot of Anugerah Musik Indonesia (AMI) Awards nominations, including Best Woman Pop Solo Artist and Best Pop Album.

“It took me a year, more or less, to finish the album. I wrote most of the songs myself and some in collaboration with other songwriters. What I was really happy about is how much I took charge of this album. I wasn’t allowed to produce my first and second albums, but this time I was given the role of creative producer. So I could choose which direction I wanted to go with this album, what kind of songs I wanted and who I would collaborate with. And then for me to get a lot of awards nominations, it felt so rewarding. It made it worth all the blood, tears and sweat.

I’m really proud of this album – it’s quite surreal! Home to You is my favourite song. I wrote it at Oxford, when I was in a long-distance relationship. The song is about longing, homesickness – because I was so far away from someone I love, from family. I wrote the song by myself two years ago. I’m getting sentimental when I listen to that song.

“A lot of artists influence me, but we will not necessarily have the same style. I like artists who wrote their own songs. I like Tori Kelly, Alessia Cara. Taylor Swift’s songs are very pop, but the fact that her music reflects her personality so much is what I respect about her. You can tell by listening to her song that it’s really about her.”

Maudy’s work on youth-related issues includes a lot of social activities. One of these is a roadshow project, Kejar Mimpi, involving inspirational talks at schools and universities. “I think what young people need is some kind of space for them to meet to talk, sharing thoughts, until they can grow as an individual, she says. “Based on what I experienced at high school and in university, having direction is really important for young people,

“I feel like this is a very important stage of their life – not just academically, but you are also trying to figure out who you are, who you want to be friends with, what you want to do in life. Those ‘little things’ that people sometimes forget, and when they do remember it’s already too late.”

This project has been, perhaps, too successful. Maudy has received thousands of applications, so many that she has had to postpone the announcement date. “I was so overwhelmed! I designed an application form with essays and long answers, so I could get to know them and see if they really wanted it. But, of course, because of those long answers need more time to evaluate.

“These kids are so smart and creative. We have received applications from Indonesians studying and living in places like Abu Dhabi, Florida, Russia. This is so interesting. It’s good to have these people involved, so that when we eventually meet we can give a lot of inputs and it will make the conversation richer.”

The conversation turns to social media and the impact it’s having on young people, both positive and negative. “I think the biggest challenge for them is to overcome distractions and to filter information,” Maudy says. “For people around my age, I think we are mature enough to use all the information we get from social media for positive purposes. For the younger generations, social media means everybody is connected to each other in some sort of way.

“It’s scary for me because I think at that age, we are supposed to polish our capabilities and skills – to try new things, new ideas that might sometimes pop up. But in this digital era, nobody has proper downtime. Even when you have free time, you have something to do! Innovations, creativity and self-development won’t happen if we are always sticking our nose into our Instagram feed.”

What about the negative side of social media? “Social media is a vessel for creativity, for business and commerce,” Maudy says. “But when people talk about the negative side, that kind of conversation needs to be happening – like a user guide, it comes with a disclaimer or something. And also we need to know how many hours it should be used for a healthy consumption. We need to learn how to use it properly – how to filter what kind of information we want to see, and not be aimlessly scrolling just to waste our time.”

Bvlgari is in Plaza Indonesia, Plaza Senayan, and Pacific Place.

Dior is in Plaza Indonesia and Plaza Senayan

Lanvin is in Plaza Indonesia

Valentino is in Plaza Indonesia