For Mark Thawin, the road to success had been punctuated with incidents as dramatic as his fashion sense. 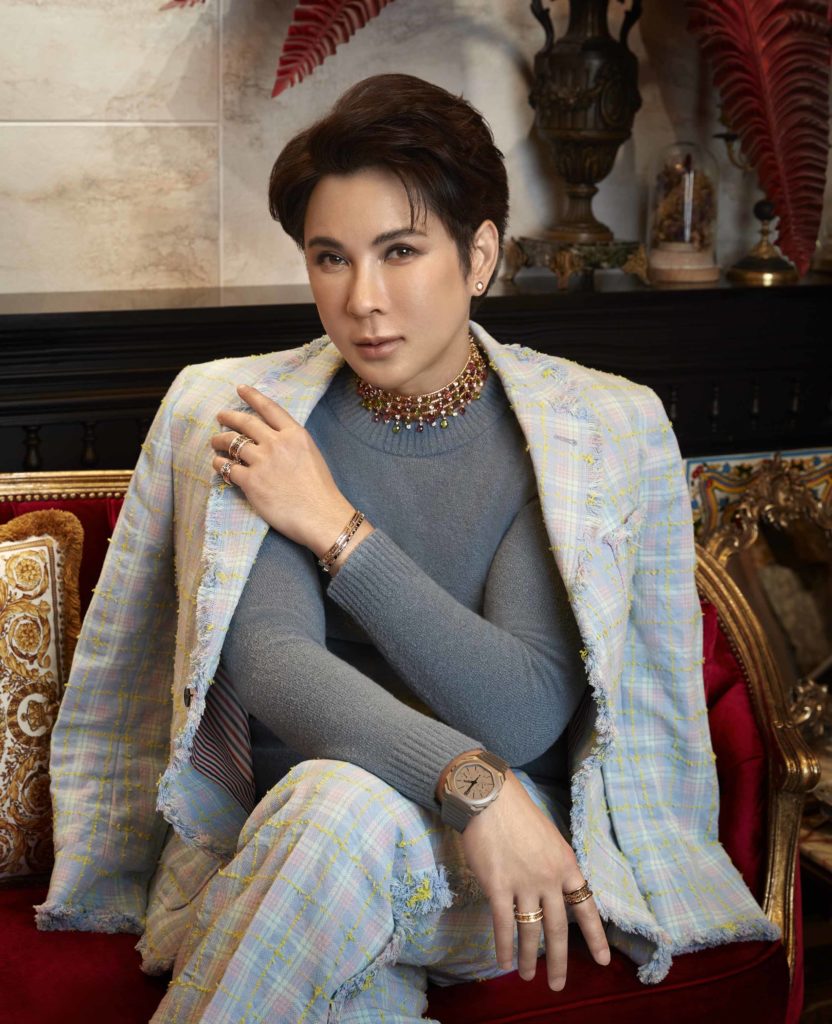 The celebrity hairstylist Thawin P. Siaotong, better known as Mark Thawin, was never keen to hang out at his own hair salon. He had opened Mark Thawin Ultimate Hair Solution a decade ago, and although the premium salon enjoyed considerable popularity and success, Mark decided it was high time to give his longstanding creation a total makeover. Today, the plush enclave on Srivara Road has morphed into a baroque wonderland where VVVIP customers flock to have their manes cut, coloured, and coiffed. At the newly-launched Maison Mark Thawin Hair & Elite Lifestyle, the staff are nattily dressed in taffy pink suits. The luxurious neo-Renaissance interior, with its golden chandeliers, columns and velvet cushions, seems more like an opulent home than a salon. On the second floor, in a Victorian-themed room, afternoon tea and bottomless glasses of champagne fuel the endless chit-chat with customers. Needless to say, Mark is in his element again – and couldn’t be happier to be at his workplace every day. Sitting down for a conversation with Mark, he opens up and tells us the story of his life. His Mother Inspired him to become a Hairstylist

Born to a Thai mother and a Filipino father, the little time Mark Thawin did spend with his mother, when she was not travelling abroad with his pilot father, was largely spent at hair salons. As the fourth of seven children, the lone middle son was close to his mother and tagged along wherever she went – mostly due to the fact that his siblings all paired up into respective age groups above and under him. “I spent a lot of my childhood waiting around for her in a hair salon,” he laughs. “I clearly acquired a love for dressing up and taking care of myself from my mother.” He had a Rebellious Streak Before Turning to Hairstyling

Despite growing up in an affluent household – raised by his aunt, grandmother, and a nanny – he had a rebellious streak and never actually graduated from high school. He would be cutting class to hang out at a hair salon, because it was situated right next to his school. When his mother found out years later that he never graduated, her wordless disapproval pushed him to finally make something of himself.

Being close to a number of hairstylists, and having modelled in hairstyling competitions, Mark decided to heed the advice he’d often been given that maybe he could try his hand at hairstyling, too. He started out taking courses from local beauty schools such as Ketvadi, and what followed for him were a handful of hit-and-miss salon openings in Pattaya and various other locations. A lack of management know-how was at the root of those failures, so for some time afterwards the inexperienced hairstylist worked in Bangkok at other people’s salons. “My early career path wasn’t filled with roses and sunshine,” Mark says of his challenging beginnings. “There were days when I messed up the colouring and made the customer lose their whole head of hair! I studied at a variety of institutes but felt that I wanted to improve and develop even more. Eventually, I wanted to study abroad because truly international standards were being taught at renowned schools such as Sassoon Academy in London.”

His Unapologetically Fun Sense of Style Is Inspired by his Mother Besides being renowned for his hair colouring and styling skills, Mark has also become well known over the past decade or so for his kaleidoscopic and unapologetic, but always fun sense of style. He is a fashionista in the true sense of the word, and can always be seen in the latest collections, mix-and-matching outfits with striking accessories and jewellery.

“My mother loved to dress up,” he says, fondly remembering his most-influential style icon. “She learned how to tailor her own clothes and I was immensely inspired by her. There were skirts that she would drape across her body, or scarves that could double as a hairband. I used to buy runway looks, but have started to feel that it is quite boring and limits dressing up. Lately, I’m more into classic pieces that can be mixed and matched in order to create one’s own style. I love Versace, Dolce & Gabbana, and Chanel – the latter because it’s something that you can wear for the rest of your life.”

He Knows When to let Go to Grow 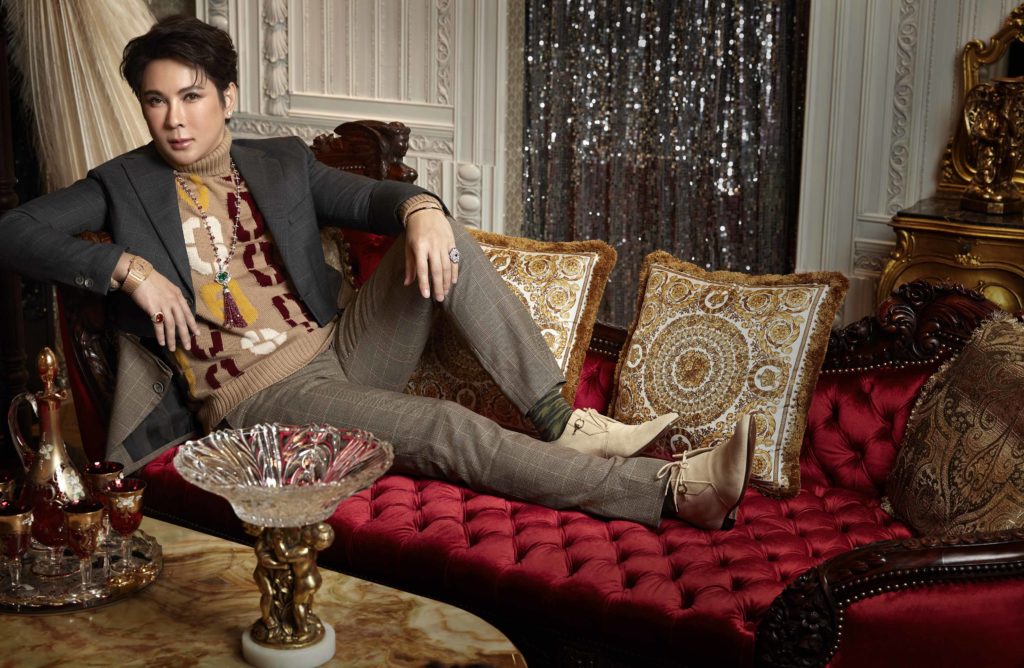 Although he took classical and creative cutting courses, the most important lesson for Mark was how to unlearn old techniques and to let egos subside. “If you don’t throw out the old, how can you have space for the new?” he observes. “Many stylists have this problem. Their mindset is blocked and they are stuck in a rut. You mustn’t be scared to throw out your old experiences. If, someday, all that I’ve done is not relevant or the best anymore, I am ready to throw it all away to start over.”

This explains the 30-million-Baht renovation that’s transformed his salon into an amalgam of all the shining totems of Mark’s life – namely hairdressing, society and world travels.

Not a Luxury Salon

Luxury, for Mark, is something very specific, and the same notion applies to how he defines his salon. “It’s not a luxury salon,” he insists, “but a salon for people who live luxuriously. Those two things are very different. There are luxury salons everywhere, but if you see this, you will know immediately that it is my salon.” 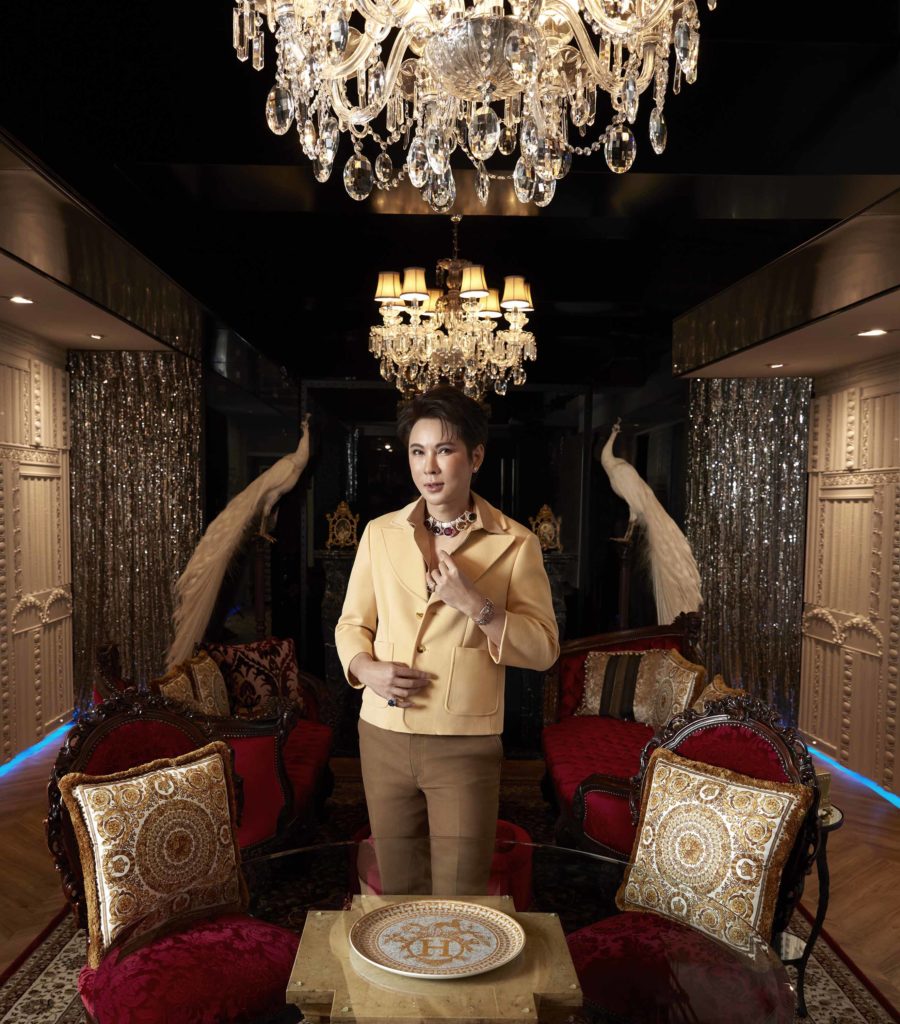 Mark’s vision for had been to make the experience exquisite, like Michelin-calibre fine dining but for the salon world. It’s a place where haircuts start at THB 5,000 and colour-dye sessions can cost up to THB 60,000, and customers usually spend all afternoon luxuriating within this posh destination that places the utmost attention on health-conscious products and cutting-edge technology. “This is truly my dream salon,” the proud owner gushes. “People who come here are from the top levels in society and they understand and appreciate all the things we do and the products we use here. My customers have become friends who come to chill out, chitchat, and take photos. I serve them Mariage Frères tea and snacks as if they are special guests in my own home.” 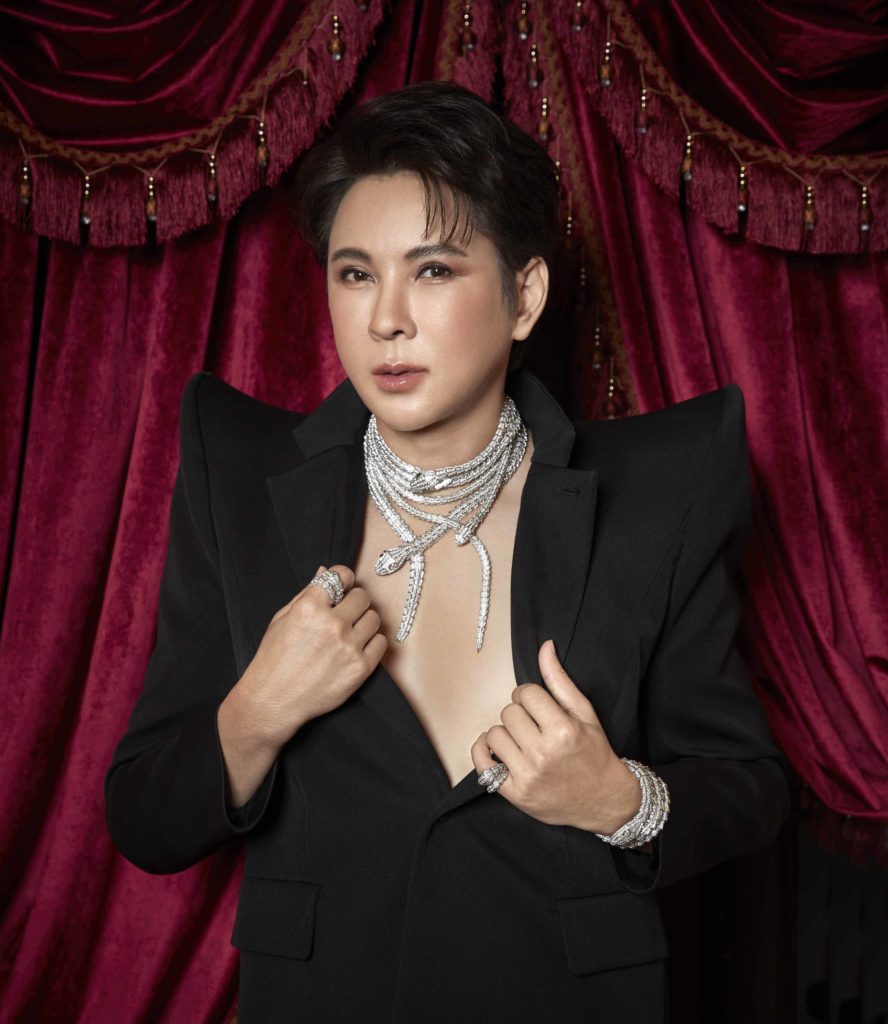 To Mark, Diamonds (and Jewellery) are Forever

As a bold individual who has always dared to think outside of the box, Mark is considered to be among the first Thai males who proudly wore Bulgari’s Serpenti necklaces. Now he’s moved on to larger baubles, and when I meet him he is happily adorned with a one-of-a-kind Bulgari high jewellery Monete secret watch pendant – a dazzling piece, with studded diamonds, rubies and an ancient coin depicting Alexander the Great. “I cannot go a day without wearing any jewellery,” he confesses with a laugh. “It’s a very sound investment, too. Clothes devalue and yet you still buy them, so why be reluctant to buy high jewellery? When I look in my safe, I am always so happy because I can wear these pieces for the rest of my life… but I don’t know where to dump or sell off my old clothes!”

Read the full interview in the March issue of Prestige Thailand.

Sign up to get the latest luxury and lifestyle news delivered to your inbox.
Prestige Online Thailand
people Fashion Style Pursuits