Beauty & Wellness
Bold Beauty Looks We Loved from London Fashion Week
Travel
You Can Now Book an Entire Maldivian Island for THB7.6 million per Night
Style
Why Silver Enthusiasts Should Visit the Upcoming ‘Siam Silver Showcase – Fr...
Beauty & Wellness
5 Luxury Sanitisers to Get Your Hands on Right Now
Sign up for our newsletter to receive the latest on the city's top personalities and coverage at exclusive events.

Over the past few years, Thailand has seen an increasing awareness of issues related to gender inequality and sexual harassment. The success of last year’s Dragonfly 360 women’s summit — the first regional gender equality journey of its kind to take place in Southeast Asia — is a tell-tale sign that we’re more ready to discuss issues that have long been kept hushed. As Thailand takes small but sure strides towards the hopeful possibility of a more equal society, a large part of this change is thanks to Cindy Sirinya Bishop, and the #DontTellMeHowToDress campaign she launched in 2018. We sat down with the supermodel and rising social activist to talk about her views on empowering women to speak up, the dangers of toxic masculinity, and uprooting multi-generational issues to bring positive change.

“Look, anytime you stand up for something that’s not the cultural norm, or pushes back against what most of the people are saying, you’re going to open yourself up to criticism,” Cindy tells us simply, when we ask her how she feels about fighting for women’s rights, in a society where gender equality and sexual harassment — albeit increasingly discussed — still remain very sensitive issues.

“A lot of people in the beginning were like, ‘oh, you’re a model and a farang, you’re used to wearing sexy clothes, but why are you trying to get Thai women to dress sexy to tempt rape.’ But that’s not what this is about at all. It takes a lot of explaining, a lot of stamina, and a lot of patience to continue talking about these issues.” 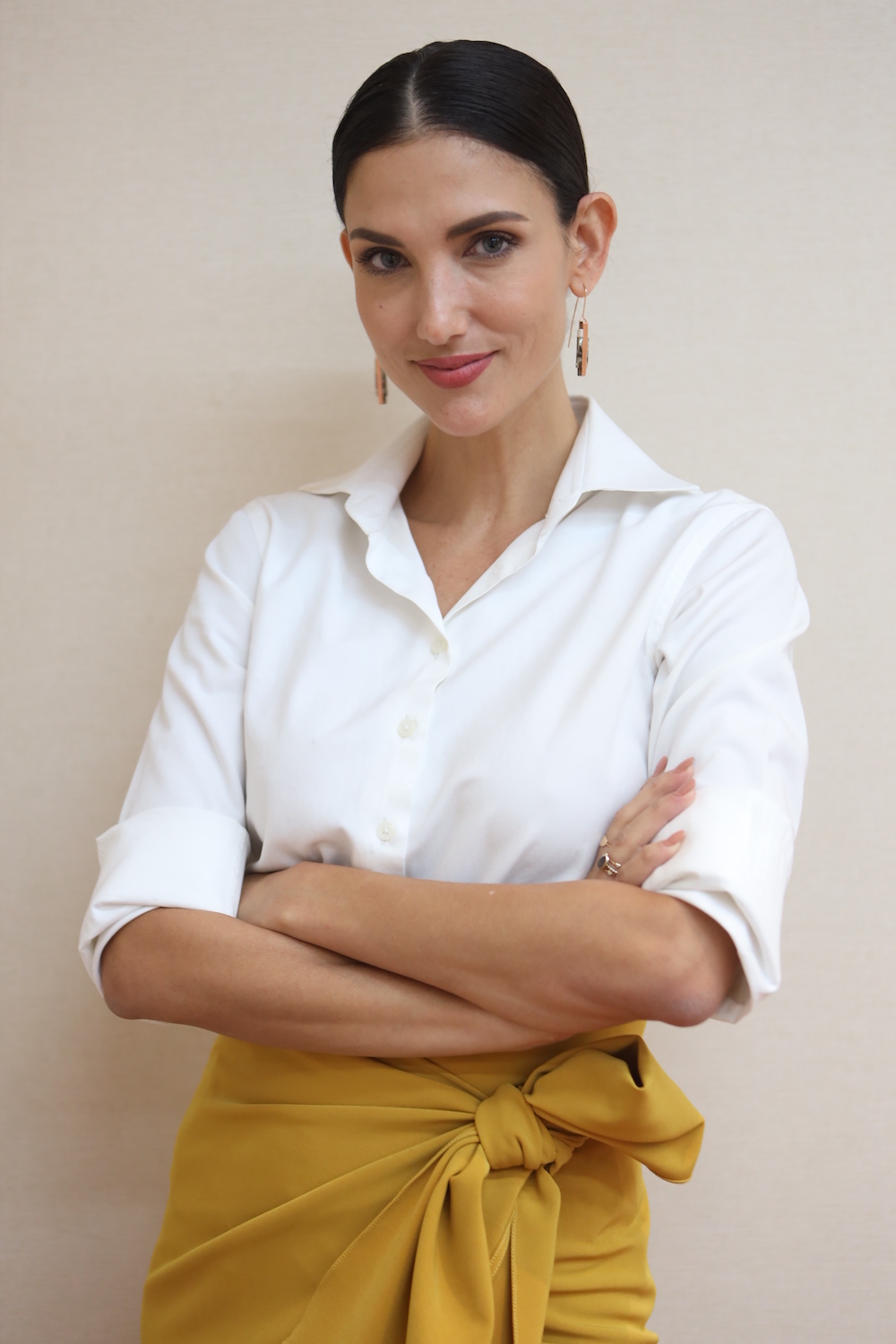 To her, such challenges make it all the more important to keep striving forwards. “Even though it’s hard, we need to keep having the same difficult conversations, because not enough people are having them. The more I talk about these issues, the more other people are empowered to talk about them too.”

“I don’t care if a woman was naked in the middle of the street, you still don’t touch her.”

A line that comes up often is the idea of “if it was your daughter, how would you ask her to dress.” To Cindy, however, that’s a different topic altogether. “Dressing respectfully for the occasion, and galataesa — which I’m a big promoter of, too — is another issue,” she explains, “it’s about how you present yourself to the world, which belongs in a different discussion. This discussion is about how, regardless of anything, you can’t use what a woman is wearing as an excuse — I don’t care if a woman was naked in the middle of the street, you still don’t touch her.”

You Can Start Small — Just Being Heard is Very Empowering

Though #DontTellMeHowToDress became a viral movement, Cindy tells us that the attention actually came as a surprise. “My story is that I was sexually assaulted during Songkran when I was 17,” she tells us, “I was assaulted by 5 men at a Songkran party, like so many women in Thailand have experienced, but it’s hard for us to report it because it’s in a party setting. Then one day, I came across this headline in the newspaper where local authorities were discouraging women from ‘dressing sexy’ to curb sexual assault, and I thought ‘really, that’s the only thing you can think of? Why aren’t you talking to the men who are doing the assaulting?’ I just posted my rant on Instagram to express how I felt, and I didn’t realise it was going to go viral. But then when it did, I was like, ‘ok, well, now what am I going to do? Let this opportunity go away?’ It’s what I did afterwards that made a difference, and turned it into a movement.” To strengthen the cause, Cindy finds it more important to let everyone know that they can make a difference. “You don’t need to have big campaigns or anything like that, just starting from something small everyday and believing in your voice can have an impact,” she says, “We need more women to be able to come forward and share their views, and to achieve that, we need to create safe spaces for these women to express themselves, whether that’s online or offline. There is power in numbers. I am empowered when I hear another strong woman say something and tell her story. That empowers me to come out and tell my story. Just being heard can make a difference, so even just being there for your friend, or somebody who is going through something, can be a good start. At the end of the day, it’s important to know that your voice really matters, and change can all start from one moment — I’m proof of that.”

“It’s going to take generations to undo what we’ve already done, which is push this idea that a boy is more valuable than a girl, that his voice matters more than hers, that he is destined for bigger things, and she’s been destined for the home. That’s something I really want to change.”

Education is Really Important, More So Than Censorship When asked about her plans for the future, Cindy tells us she wants to write a children’s book about body autonomy, the right to safety, and “no means no”. To her, education is an important concern. “I think toxic masculinity is basically kind of the root of all evil,” she says with a slight laugh, “but it comes from what we’re teaching our kids, and it’s a multicultural, multi-generational issue. It’s hard, and it’s going to take generations to undo what we’ve already done, which is push this idea that a boy is more valuable than a girl; that his voice matters more than hers; that he is destined for bigger things, and she’s been destined for the home. That’s something I really want to change.”

Another pressing concern for Cindy is addressing touchy topics directly, rather than sidestepping or sweeping them under the rug altogether. “We need to talk to our kids about sex and natural development,” she says simply, “Nobody wants to talk about it, but if you’re not going to teach your kids, then who’s going to teach them? The internet? There’s so much more to be taught than the actual act of sex. There’s so much more to be taught about gender and relationships, like, for example, teaching your child to say the proper name of his or her genitals. It’s normal, don’t make it shameful, because they’re going to think that it’s something to be hidden, and if they don’t even know the right name to say it, how are they going to come and tell you if something happens?”

You Have More Worth than You Give Yourself Credit For As for what advice she has for young girls who look up to her, Cindy’s is short, sweet, and profound. “Just believe in yourself. I know it’s hard when you’re young, but you have more worth than you give yourself credit for, and you can move mountains. It might not be at this moment, but just believe in yourself and great things will happen.”

Another big one for her, is to be aware of the energies around you. “Surround yourself with positive people. This is super important, and I do it consciously everyday. Be very, very vigilant about what input you’re taking in, whether it’s what you’re watching on screen, the things you’re listening to, or the people around you. All this has an affect on you, and if you want to be great, if you want to be the best version of yourself, if you want to be confident, surround yourself with great, confident, and positive people. It really makes a difference.”

To find out more about Cindy Sirinya Bishop, visit her official Instagram Page. All images courtesy of Dragonfly 360.

cindy bishop
people
dragonfly 360
influential women to know
Mary Losmithgul
The online content creator for Prestige Thailand, Mary handles the magazine's digital platforms. She enjoys black coffee, astro charts and listening to entire albums in one go. When not engrossed in a novel or having brunch, catch her on the hunt for new restaurants and the city's latest happenings.
Talk to Me About:
Society
events
travel
property
watches
drinks