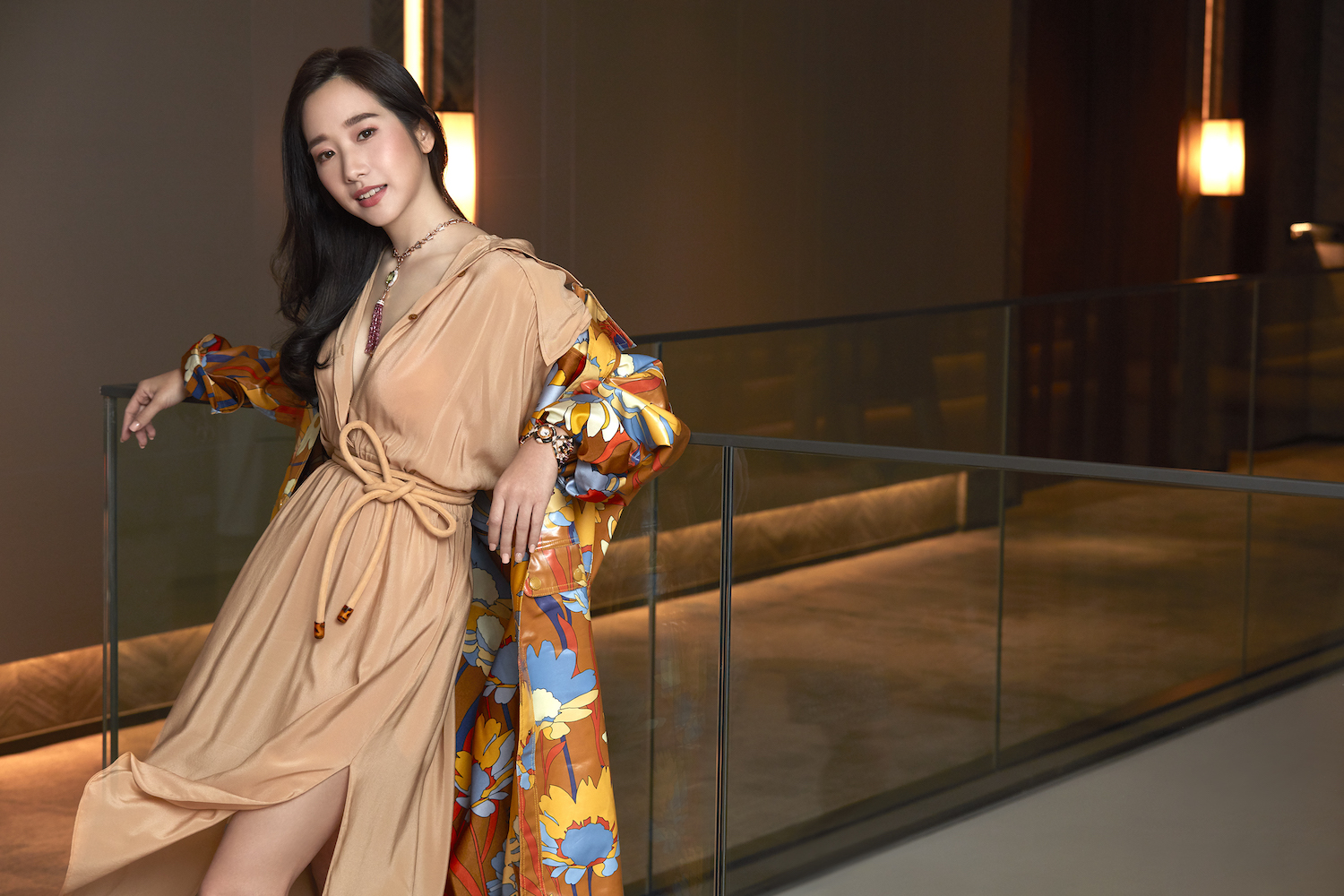 With flawless skin, and a petite frame that makes her seem young beyond her years, you wouldn’t quite guess that Louise Taechaubol has already weathered some of life’s most trying hardships. Yet, at barely 40, the investment hot-shot seems to have already been through, and done it all. The third child of property and finance moguls Sadawut and Orawan Taechaubol, Louise’s childhood was an adventurous one. Having grown up in Australia with three brothers — Bee, Ben, and Tommy — she spent her younger years playing soccer, boxing, and watching movies with the family.

The Strengths and Passion of Louise Taechaubol
People & Events

Today, she sits at the helm of Triton Holding Public Company, where she’s been the Chairwoman since 2016. Known to tackle all of life’s obstacles with a graceful stride and positive smile, we sat down with her to talk about her views on success, the stock market, and breaking boundaries to achieve your dreams. Here are a few snippets of wisdom we gained.

“Things that go up will come down.”

At the time of our interview, Covid-19 was on a steady rise, with paranoia surrounding the pandemic leading to increasingly apparent economic downturns. Mid-conversation, Louise politely excuses herself to answer the urgent messages on her phone, as the matter at hand could no longer wait. “Stocks just dropped 50 points,” she explains, apologetically, but without even the slightest flinch. In such a situation, it’s a reassuring sight to behold — a tiny yet poised Louise smoothly tackling her losses with a steadfast sense of calm and level headedness.

She tells us that such lows aren’t surprising to her — as a well-seasoned stock investor who’s profited from the market considerably since she was 18, she views the situation with an objective eye. “I’ve gone through these up-and-down cycles before, although this is the first time I’m seeing it through a pandemic. You can’t really say if it will last long or not. But eventually it passes, like everything else. It’s tough times, but I’ve seen it happen many times before. From the Tomyum Goong Crisis in the 90s, to the Hamburger Crisis in 2008, to all sorts of weird circuit breakers, it’s just a phase that maybe you can use as an opportunity. Things that go up will come down.” And then, with a dry laugh, she adds, “Although in the Thai market, I only see it go down.”

“I could go into finance, [because] I saw that it works.”

Incredibly stock market savvy, one wonders where Louise managed to get her expertise — a mystery that is immediately solved when she reveals that she has been in the game since she was, and we kid you not, only eight years old. “My mother would open the newspapers to show me the stock reports, and we’d choose together the ones I wanted to buy with the money I earned for getting good marks,” she recalls with a fond smile, “otherwise, I wouldn’t have known these things at all. I would buy things like McDonald’s, Coca Cola, Telstra — anything that I used, I wanted to buy. By the time I turned 18, it’d been 10 years and I saw that it made money. It made me realise that I could go into finance, not because I was interested in it but because I saw that it works.”

Though she’d been exposed to it at a very young age, Louise’s interests initially leaned towards the arts — she’s able to play piano by ear, and was always top of the class when it came to drawing and painting. She comically admits that she was so into the arts, that bribery was what got her to improve on her other academic pursuits. “My father used to ask why it was that I didn’t get straight A’s like my brother Ben. He resorted to offering me $1000 AUD for every A that I got, and it was then that my grades improved. And it was with that money that I used to buy stocks.”

For someone who was more creatively inclined, when asked if she would rather have pursued that instead of finance — which she ended up studying at the University of New South Wales, at the insistence of her parents — Louise responds that she has no regrets whatsoever. She reckons she may have been influenced by her father’s business-related dinner table conversations, or spending holidays at her mother’s property development showroom. “Given the choice though, looking back now, I would not have chosen to study art after all. I have to thank my parents because I think that I am only where I am today because of them.”

“There are things I thought I couldn’t do, or wouldn’t get through, but you will eventually.”

After graduating, Louise was called back to Bangkok, where she obtained her master’s degree in business administration and finance from Sasin at Chulalongkorn University — a relocation her siblings also experienced, as a way of helping them all assimilate back into Thailand, and “have more Thai friends”. By then, Louise had already found her calling as an investment broker, which she considered to be the “best job in the world”, with only four required hours of work each day. She excelled at her first stint with Siam Commercial Bangkok, and left a year later when her father acquired Country Group Securities, where she would take the lead as chief investment officer. Barely in her twenties then, taking on such a big, managerial position might have seemed like a daunting challenge, but Louise tells us that she “didn’t feel pressured. I knew that I just had to do whatever I had to so the company would profit. I have been extremely lucky that my uncles always taught me. They showed me that to invest is not easy, like I was when as a child I just picked stocks. They showed me what to do and how to do it in the Thai market. It accelerated my learning curve.”

It’s her father, however, who she credits as her greatest mentor and inspiration. “I look up to him a lot because he is good at what he does. He helped me to set up my business and I could always count on him whenever I needed him. Dad is not really a morning person, but if I asked, he would always be present at early morning meetings. It’s amazing how he always gave 100% even when it wasn’t his own investments.” Today, her holding firm’s main revenue comes from its construction projects, including the longest oil pipeline in Thailand (spanning 600km from Ayutthaya to Lampang. “There are things I thought I couldn’t do, or wouldn’t get through, but you will eventually. I never in a million years thought that I would have to get into construction, but I did, and I quite like it actually. You learn to like and be interested in it; how to build things and how to gain profit from it. When life gives you lemons, you pretty much just have to make lemonade!”

“There are no boundaries in life. You can do anything you want.”

Louise holds her forward-thinking philosophies and positive outlook very close to heart — she raises an example of her love for extreme sports, and her recently developed interest for kitesurfing. “People would all go, ‘Louise, you’re tiny! How could you go kitesurfing?’ but I say that doesn’t mean anything. Ever since I’ve come back to Thailand, one thing I’ve observed is that women don’t play sports. But I have always loved team sports since I was young. I don’t like being in a gym, that’s very boring for me.” Her way of exceeding expectations and going against the norm are very much what make her the charismatic and inspiring woman she is. “There are no boundaries in life. You can do anything you want. If anything, it’s the challenges that make life interesting.”

With her glowing skin, Louise genuinely insists that her youthful appearance doesn’t require much to maintain — add to her love for sports, regular rounds of yoga and pilates every week, along with sufficient sleep, and she says anyone could achieve a healthy complexion. To her right now, her focus is on living for herself and finding joy. “I feel like since I was young it was all about having to be successful for personal achievement; checking all those boxes, doing something for somebody else, making do with positions I was stuck in. I’m not even 40 yet, but I’ve pretty much already done everything. But I’ve never really had a moment to be truly happy for myself, and now I’ve finally arrived at the ‘me and my family’ phase,” she says. With wisdom gained over the years, her understanding of life is remarkably clear — mature, but not jaded.

“Don’t ever settle. You don’t want to look back in 10 years and see that you did not live life to the fullest.” To Louise, her next steps are ensuring a good succession for Triton, seeking joy through travels, and raising her three children to be humble, and to be kind. “I have now come to look up to my mum a lot. Being a mother too has made me realise how much dedication she put into disciplining us four all day and night. Just doing it for 10 minutes exhausts me already.”

Constantly bursting into laughter, and with a charmingly congenial disposition, it’s clear that Louise is a woman content with her life. To do so gracefully, she quotes a word of advice from her brother. “You need to keep it real and remember what’s important in your life. My brother likes to say that even if you become successful, you can only eat so much a day. In the end, what’s meaningful is your happiness, your health, and the people around you. That’s all there is to it.”

Find out more about Louise Taechaubol in our April 2020 issue.