For Naphaporn “Lek” Bodiratnangkura and James Davies Yandle, one may say that their first encounter was like something out of a classic rom-com movie. It was a story of boy meets girl, one of getting off on the wrong foot and eventually falling in love with each other.

Yet despite their fairy-tale love story, it was one grounded to the crucial mantra of any healthy relationships: if you love someone, let them soar and, god forbid, don’t play games when it comes to your feelings. Sitting down Lek, the CEO of Nai Lert Group shares her long-distance love story and how it all magically falls into place.

How did it all begin?

It started six years ago. We met here in Thailand when he brought the football legends to stay at my old hotel—the Swiss Hotel Nai Lert Park. Then he made a complaint about the rooms, and when the GM couldn’t do anything to fix it, James asked if he could meet the owner of the place. So I came down to the lobby to meet him. I was like, “what’s going on?” and we were discussing the matter. In the end, I told him that “if my hotel is not good enough for your football legends, then you’re welcome to **** off” (laughs). That’s how it all started.

I think we clicked because we were both true to ourselves right from the beginning. We didn’t paint picture-perfect images of ourselves. I mean, I’m one of those straightforward and blunt type — no filter, you may say — so it’s easy for him to communicate with me without having to second-guess what I think or whether I mean what I said. 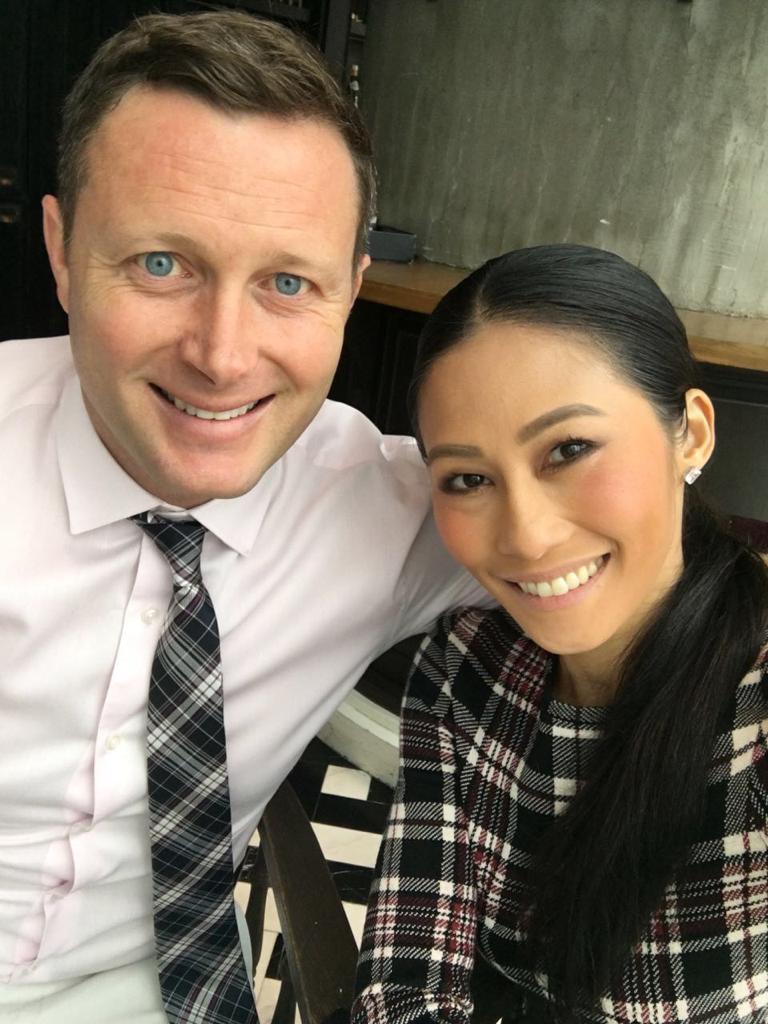 Has it always been long-distance since the beginning?

Initially, he was based in Dubai, and so it was a long-distance relationship from the beginning. We were doing long-distance for the first two years before he eventually moved to Thailand for work and our relationship. I wouldn’t have let him move here just because of me. He had to have something of his own. Otherwise, someone moves to a different country or abandons their career for you, you start feeling responsible for that, and if things don’t work out, you get resentment afterwards. So yeah, it never works. Each person has to go about their own life while sharing it at the same time.

Just as you said, long-distance relationships can be difficult. What was it like when you started in the beginning?

It’s always been relatively easy for us. We were lucky in that we both travelled quite a lot. So when I had to travel abroad, James would meet me at my destination. Since his work is quite global, he’d fly over and find something to do, work-wise, while I go about with my work. Then we’d also make a holiday out of the trip. So even during long-distance, we would meet every month.

Of course, at first, there were some challenges as we were learning about each other. So we were adjusting for a while. It was a matter of communication. We would text and make video calls—thank god for that—but it was still a challenge nevertheless because they’re not there with you in person. It’s harder to get your message across. When you lack physical touch and face-to-face conversation, it takes much more effort to convey your feelings, as that can get lost in (electronic) communication. Sometimes, when you’re together, even the silence can be bliss. However, on the phone, you don’t want to leave it silent for long. You feel that you have to make conversation. Otherwise, it feels strange to be on a call without talking.

How did you overcome the challenge?

I was never guarded about my feelings, and I always say what I feel. I don’t say things if I don’t mean them. You know, I don’t play games. That’s why it was easy to overcome the misunderstandings. Mind games are never good because, in the end, either one person wins, or you both lose. Another thing is, whenever you argue, don’t leave it unresolved for too long. You both have a very grounded and healthy approach to the relationship. Can you give some tips on making long-distance relationships work?

Communication, respect and trust are essential.

Do communicate. Long-distance relationships can be difficult, but we survived that because we always communicate with each other.

Don’t spring ‘bad’ surprises on the other person. We are very open to each other, even if it’s about something very minor. Say, if James wanted to go out for a night out with his friends and come home at 4 in the morning, then he would let me know that “by the way, I’m going to get wasted tonight”. Then I would know what to expect, you know. In a long-distance relationship, surprises—the bad ones—are never good.

Do keep your individuality. Even after six years, we’re still leading the same life, separately and together. He has his sports—football—management company, and I have Nai Lert Group. We share the same values on living life with honesty and an open heart. We try to be grounded, focusing on family, friends and our loved ones. We’re lucky that we share the same lifestyle. We both love sports, and we like to eat similar things. Even if there are things that one of us doesn’t like, I can still enjoy that with my parents and my family. It’s a good balance to have something we can enjoy together and other things we can do separately.

Do respect and trust each other.

We didn’t feel deprived of freedom from the relationship. We were free to do things of our own while respecting the other person, understanding and supporting them in what they do.

Royals Who Chose a Life Outside of Royalty – Due to Love, Freedom and a Few Unusual Reasons