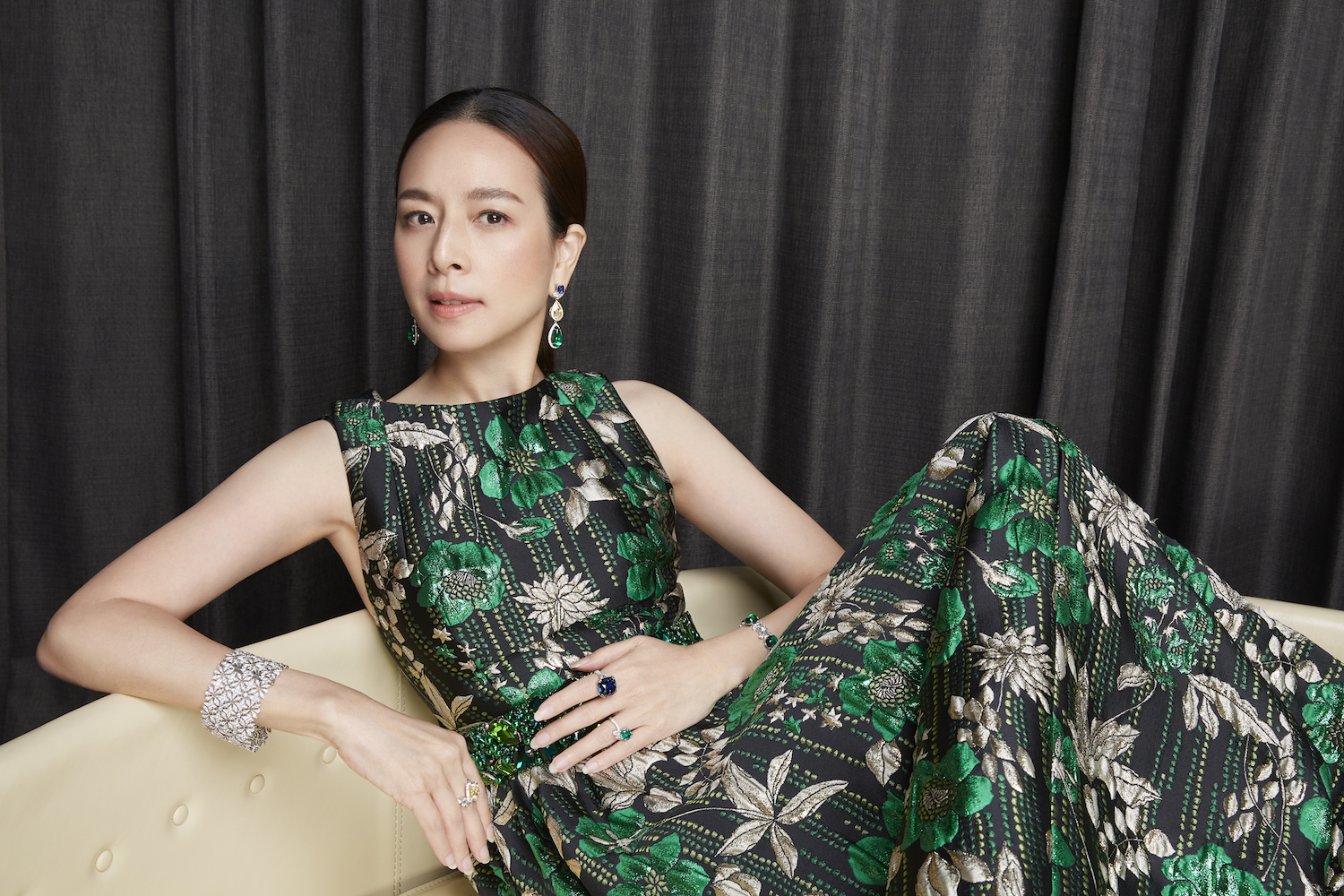 All Sides of Pang Lamsam, from Football Matriarch, to Insurance Leader, and Prominent Society Face

People & Events
All Sides of Pang Lamsam, from Football Matriarch, to Insurance Leader, and Prominent Society Face
Share
Next article

With a youthful, glowing complexion that could put those decades younger than her to shame, it’s hard not to turn in awe when business magnate and society face Nualphan “Pang” Lamsam walks into the room. At 54, she’s made her mark across a variety of industries, from being the matriarch of football teams, to a leader in the world of insurance, and a prominent society face. A fifth gen descendant of the well-established Lamsam family, Pang’s bloodline is also very much upper-crust Bangkok — she, along with her two younger siblings Wannaporn Phornprapa and Sara Lamsam — are the children of Photiphong and Yupa Lamsam. Affectionately known by many as ‘Madam Pang’, not only does she stand out with grace, poise, and a refined air of wisdom, but her aura continues to radiate from billboards and digital screens all across the country — courtesy of Muang Thai Insurance, where she helms as CEO, president, and now the face of the company’s most recent ad campaign ‘Believe Pang’.

Though she may be many things to many different people, we discovered that there’s surprisingly also a simpler side to the well-recognised society face. We sat down with the ever-influential and awe-inspiring woman to discuss her views on work, being an inspiration, and her journey to becoming ‘Madam Pang’ today.

Pang juggles between helming Muang Thai Insurance, along with other high-profile positions on the side, including her role as the honourary president of Hermès Thailand, president of the Port Football Club, and being an Honorary Consul to the Consulate of Lithuania in Bangkok. While she considers all the opportunities to be valuable experiences, she insists that soccer remains a key undying passion in her life, and until today, managing the women’s national team was a position that remains close to her heart. “It’s the role I am most proud of in my entire life,” she tells us simply, “we made history when the team had qualified to compete in the FIFA Women’s World Cup [in 2015]. I may not be their manager anymore, but those times will always live in my memories.

Here’s the thing — Pang Lamsam doesn’t actually play any soccer herself. She credits her ability to tackle this — along with her many other — positions, to consistently being a learner. When asked about how she manages sports team despite not playing the sport, she tells us, “you must always be a student and learn what you don’t know as quickly as possible. I was lucky to be surrounded by talented people who helped guide me, be it the coaches or players who taught me new things every day. Even the team’s masseuse was my teacher because they are very intimate with players and know all their injuries and personal problems. There is knowledge to be found everywhere, it just depends whether you can see it and make use of it.”

“When I was 10, I was shopping at Bloomingdale’s in the US with my mother,” Pang tells us in a quick anecdote, “she asked me to help carry her shopping bags, and the ones I carried happened to drag a whole bunch of crystal glassware down from the table. My mother went pale thinking about how much this would cost her, but the department store’s general manager was very good. He ran first to see if I was alright and told us not to worry, because everything was insured.’ The moral of this story? Pang lets us on with a laugh — “see, these are the benefits of getting insurance,” she says jokingly. Today, as she smiles her 100-watt smile from insurance billboards all across town, it’s easy to see how such use of CEO branding could do wonders for the brand — with key messages peddled by a face that is at once sophisticated, charismatic, and visibly accomplished.

Pang Lamsam on Being Off-Duty

Among Pang’s past-times, she enjoys ending the day by reading up on politics, sports, and entertainment news. “It’s my favourite activity when I’m on my phone at night,” she tells us simply. “In fact, i actually tell my team at work to always follow any interesting news they come across.”

With a near 2-million follower base on both her Instagram and ‘Madam Pang’ Facebook pages, it’s clear that the leading lady’s lifestyle is one the public both envies and earnestly follows. The mother of recently-graduated Nuanwan Phancehet, tells us that one of her favourite ways to unwind is by going on a day trip to Chiang Mai. “I like to go make merit and to find delicious food to eat,” she explains, “I love Isaan food, be it larb or somtum. I can definitely take the heat and sourness of spicy foods. If I can get away for longer, I like to go abroad. I am always working on the go though, and my staff know they will be getting messages from me no matter which corner of the world I am in,” she says with a smile.

“When it comes to dressing up, I am all in,” Pang tells us with a jovial laugh. And it’s true — beyond her work and famously youthful appearance, Pang has always dressed the part of a high society figure and is a devotedly well-attired personality. “I love to shop and I spend quite a lot of money on it. I have always been a fan and customer of Hermès. They are much more than just fashion objects. Take the Birkin for instance, it takes no less than 16 hours to produce – it’s a true work of art. I wear it all, from ragged jeans to fancy gowns,” she adds. “If I have to go to functions when there is terrible traffic, I am all good with taking a motorcycle in my long dress!”

Not only does she put a lot of money into her shopping, but a lot of her spare time is spent browsing the internet for the latest collections — especially in jewellery. “I look up jewellery too, and Gems Pavilion is an admirable Thai brand with a long and successful history,” she comments as she tries on pieces from the brand during the shoot. “I think what’s most important when choosing what jewellery to wear for an event is to see what kind of function it is and if there are any themes. Respecting the dress code is very important. I think women and jewellery are made for each other, even though men may not understand or agree,” she chuckles.

With her repute as a truly exemplary working woman, it’s nice to see that Pang also has another side — that of a doting wife. Now heading into her sixth year of marriage to Pol. Col. Naras Savestanan, Pang is much like a beacon of hope for women looking to find love later in life, or preserve what they already have. Her advice on this front is simple: “It’s so important to trust each other, and to care for each other,” she explains, “There is no way that you will both agree on everything, so it is important to constantly take care of each other’s hearts to overcome obstacles. I really do believe in destiny and that everything is already set by the stars. Love is as well, and there really is no way to tell when, where, or how you will meet your love. People may have thought I was done with love [after my first marriage] but I eventually met Naras and it became a wonderful love. It made me realise that you will never know when you will meet your life partner, so age may have nothing to do with it.”

Pang Lamsam on Her Past

For such a refined and high-powered executive, it comes as a bit of a surprise to see that her childhood was relatively normal. Pang looks back fondly at playing tag with her countless Lamsam cousins, and spending her days studying at Patumwan Demonstration School. She admits to us that she’s always had a rather spunky side, though it’s often hidden behind her seemingly elegant outward demeanor. “People may think Nualphan is a sweet girl, but on the contrary, I’m actually quite manly” she tells us with playful honesty.

“I wasn’t an extremely smart student either while studying accounting at Chulalongkorn University,” she tells us admittedly. “My GPA was only 2.8 and I was also skipping class – not that it’s a good example to take after! But despite that, I was honoured to be chosen as the president of the female students of the Accounting Faculty. I don’t know why my friends chose me, but I’m guessing it’s because they know my personality. If I set out to do something, I put everything into it, and I have always been this way since I was a child.”

Pang Lamsam on Looking Ahead

Having received the ‘Influential Women Award’ last year, Pang humbly tells us that she is grateful, but has never viewed herself as an influencer — hoping instead to inspire others. “I never think that I am already successful, because when you do, you will stop improving yourself. I am always curious to learn about other successful people from various industries, in regards to how they work and think, in order to apply that to myself.”
Despite an easy-going attitude, belying it is a veneer of perfection, which Pang proves by insisting that there is still much for her to improve on. “I don’t think my life is perfect at all and I think we can always keep improving ourselves.”Of course, while critical and logical, Madam Pang lets us in on yet another fun fact — that she doesn’t rely on strong will and eloquence in management alone. Her secret? Astrology. “Not many people know this, but it is something I really believe in,” she laughs. “I have a personal ritual that I always do whenever Port FC or the national women’s team competes. I can’t tell you what it is though, in case our competitors follow suit and it doesn’t work for us anymore!”
Find out more about Nualphan “Pang” Lamsam in Prestige Thailand’s March 2020 issue, available in all leading bookstores nationwide.