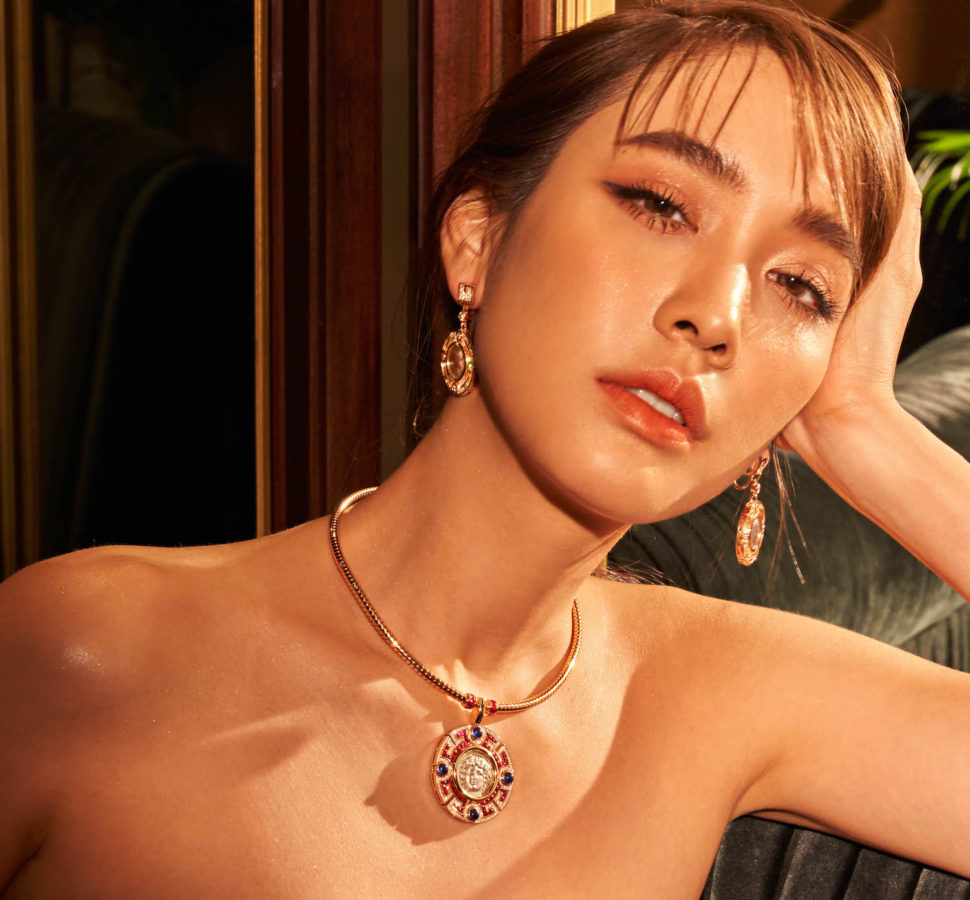 Leading model and actress, Pechaya “Min” Wattanamontri shares her thoughts on reaching milestones, making time for yourself, and living life to the fullest.

Spunky and filled with vivacious charms, high-flying model and actress Pechaya “Min” Wattanmontri brings with her a burst of positivity, as she enters the room. We meet her at the spacious lobby of newly-opened Kimpton Maa-Lai Hotel — a venue she’d chosen personally, so that her adorable corgi, Octo, could tag along to its dog-friendly premises. While successful actresses like Min typically live on a very rigid schedule, Min doesn’t give off the impression of being in a hurry to go anywhere. In fact, we’re pleasantly surprised — almost envious, really — of the incredible work/life balance she’s come to possess. The leading silver screen lady and businesswoman is now able to set aside time for herself and her loved ones — a key person being, of course, her beloved beau Pitak “Oat” Spatam.

Flashing her mega-watt smile, she sits down with us for an intimate chit-chat, going over the milestones she’s reached in life, her most treasured moments, and the lessons she’s learned along the way. 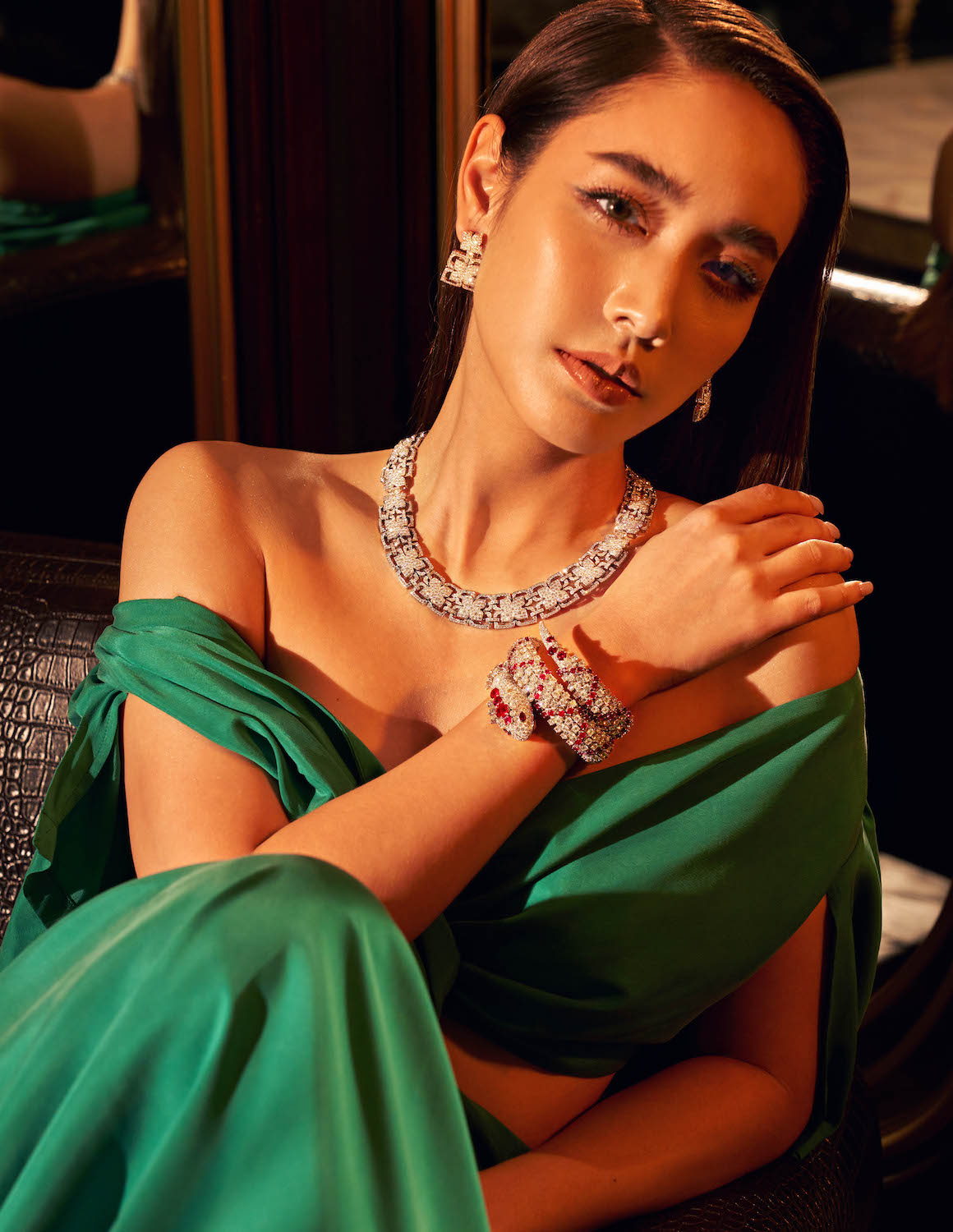 A decade after entering the Thai entertainment scene, Min is now one of the top names under Channel 7’s portfolio of stars — a rep that’s allowed her to be more selective when it comes to her roles. “I can now take a step back and have more time for other things,” Min tells us, explaining that she no longer accepts every single acting job.

“The time where I would wear out my body is over. No more being in hospitals, functioning on three hours of sleep, or getting steroid shots just so I can get back up to work. I now understand that it’s just not worth it. When I see younger actors doing that, I get that they’re in a particular phase in their life where they can still do that, but my life isn’t about that anymore and I’m well beyond that point. I love to work, but if I need to rest, I now know to. I actually haven’t taken any jobs on New Year’s Eve for a couple of years now. I’ve already worked hard all year, I deserve to get that night off.” When it comes to the roles she does accept, however, Min loves rising to the challenge. Having received the Mekala Award for a Leading Actress in 2012, she now revels in trying fresh, novel roles that she has never played before. Though she can’t divulge too much about her next project, she hints playfully that it involves cancer, comedy, and “not looking pretty at all.”

“I’ve reached a point where I now seek different roles that are more challenging, and this is one of them,” she tells us happily. “When I read the script, I was really surprised because this plot is not one I’ve ever seen anywhere before.” Much of this quality over quantity mindset she goes by today is inherited from her father, Supat, who always taught her that work isn’t everything. “I’ve never been obsessed with my career because I feel that success in life is to be happy in all aspects. My father has always been very big on life experiences, and always teaches me to live life fully. Back in the day he’d tell me, ‘Sure, get those good grades to make mum happy, but also learn about life from friends, sports, and outside the classroom’. My grandfather literally died on his worktable in his 40s so I never even had the opportunity to meet him. It’s really sad when you don’t get to live your life, and so I feel that my father’s advice is very important.” Don’t be Afraid to Mess Up

Between studying Business English at ABAC, and taking home the first-runner up award in the Miss Teen Thailand pageant in 2006, Min’s life has been pretty eventful. A combination of good looks and a sophisticated persona has steadily landed her jobs for well over a decade. While most may be used to seeing her as a soap star, or a presenter for leading brands, she’s always been very much a business mogul as well. In fact, many of her days now revolve around stock investments, and plans to expand her family’s Khon Kaen-based real estate businesses to Bangkok. Despite being in his 60s, her father still oversees the Chonlapruek Parkville housing development, while her elder brother Max sits at the helm of SCG Home Solution Max Home Khon Kaen.

Much of her business acumen stems from her father’s influence. “My father has always encouraged me to get into business and to try it all out regardless of the failures I may encounter,” she reminisces, “He said, ‘Don’t be afraid to make mistakes, be more afraid to not become a success. If you’re afraid to mess up, you will never do anything with your life!’ With acting too, he’s always told me to try it, learn from it, and be the very best one out there.” While this issue is definitely a major milestone for Prestige Thailand, as we ring in our 15th anniversary, Min tells us that the age of 15 was a pretty life-changing turning point for her as well. “15 was when I went on an exchange term to study in Montana, USA”, she recalls, explaining that it very much made her who she is today.

“It really was a different world and it completely turned me around from being a really shy, timid girl hiding behind my parents all the time. I had to fend for myself, and that mélange of being an athlete and having to present in front of the class every day… has made me the confident and positive person that I am today. Collecting a milestone means you have to go through that experience yourself. I’m thankful that I chose to change and grow, because if I didn’t choose to go study abroad, I would probably still be working at home now.” Celebrations Should be Fun

These days, Min’s preferred social events are home-gatherings with friends — just eating, talking, and enjoying each other’s company. “I feel that a true celebration must be fun, not greeting mounds of guests you don’t even know,” she admits, “It’s being with friends who will not judge you for anything, who will still support you and be there even when you trip and fall flat on your face.”

In fact, Min confesses to being a work hard, play hard kind of person, and says she loves adventurous travels with close friends, and can also be a pretty “fierce eater”, despite eating clean meals and having a trainer for weight training and yoga regimens. “People who think I don’t eat pizza don’t know me at all.” 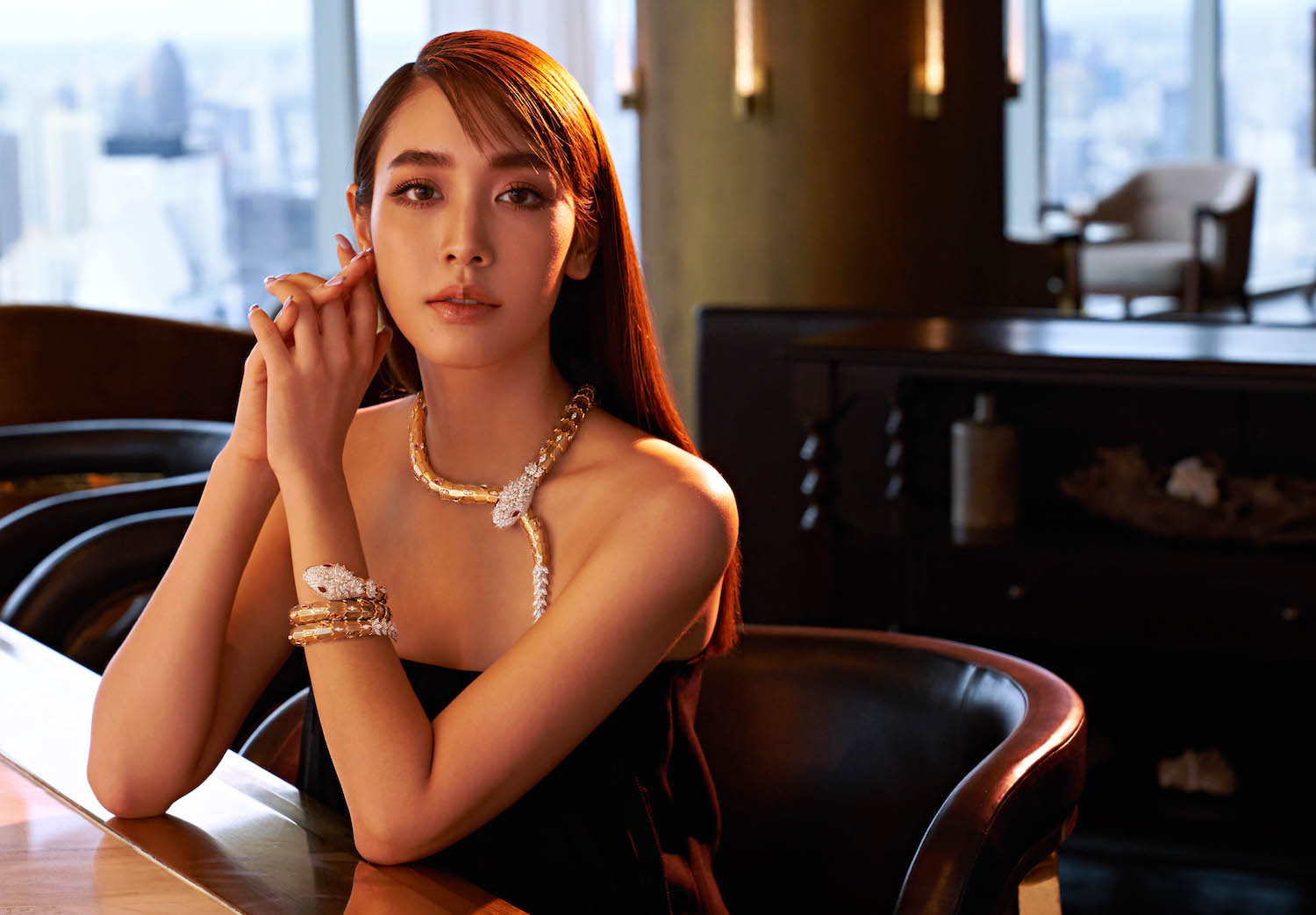 Min tells us that back when she was younger, she would splurge on brand names, but now that she’s become more of an investment savant, she’s shifted instead to high jewellery, with a personal love for coloured gems. She recalls being awestruck when she first came across Bvlgari’s Barocko high jewellery collection. “When I was younger, I could only afford a diamond alone. But, to be honest, there’s so much more to the world of gems than just a string of diamonds.”

As for how to choose these gems for yourself, Min believes there are certain pairings that are meant to be. “I do feel like these kinds of pieces seek their own master too. You both choose each other, and it’s not simply a one-sided thing. If you collect jewellery, I think it’s most appropriate when it suits you, and you genuinely like it as well. High jewellery is not something that you put a value on — even though there is an actual market price and all — it is defined by the art and exquisite craftsmanship that goes into its creation.” 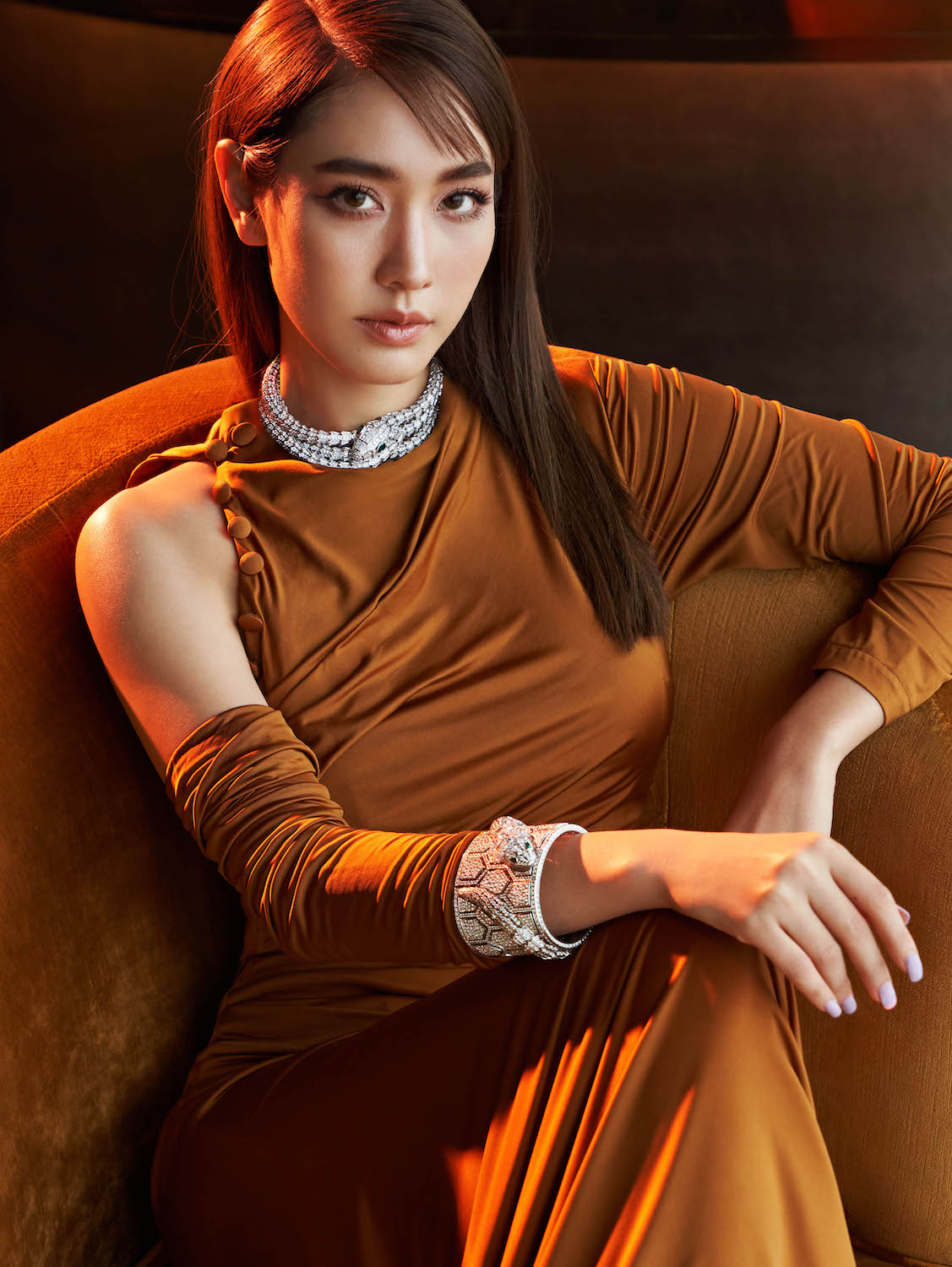 “I don’t take things personally, and would never judge anyone before really knowing them,” Min tells us — a tough lesson learned from being a public persona who’s constantly scrutinised. “Keep it easygoing and easy on the mind — but that’s something you need to learn to do. On Sunday, after I work out in the morning, I spend time with myself and think over the events of the week and what I could do better.” 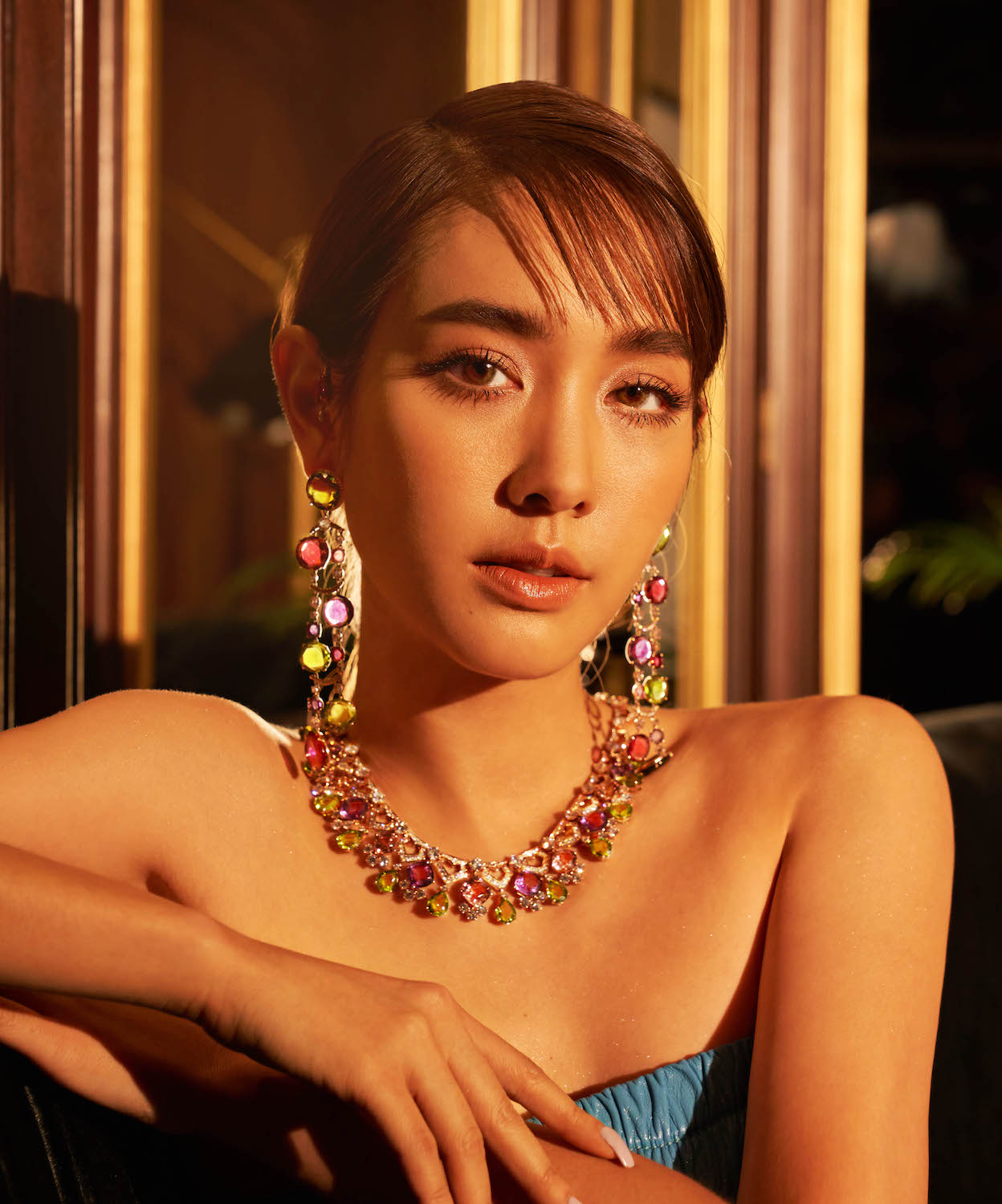 Everything Happens for a Reason

“Even failures are there to teach you something,” Min tells us, describing her mindful approach to life — a grounded, peaceful core beneath the veneer of an actress who is poised, at ease, and far from difficult. “It’s only when you don’t learn anything from the experience that it’s truly a failure.”

She’s adamant in her belief to always live. “Whatever age you are in life, it will always be filled with growth and mistakes, but that’s the beauty of it. If you haven’t been forced to understand the workings of relationships, and how to live life, then you’ve missed out on something big. To try, love, learn, grow, and make mistakes is what life is about and what we all have to go through. Track your development and see how you grow — that’s what’s fun and is the true beauty of life.”