Meet It-Girl Piraya Singha, the Brains Behind Jetset and Kimber

Whether she’s seductively sprawled across a sofa dressed in Fendi, or sporting a PVC hooded jacket from the same brand, there’s something about Piraya “Pat” Singha’s vivacious and sultry charms that make you want to stop and stare. Blessed with drop-dead gorgeous looks and a flair for high fashion, the 23-year-old daughter of Padol and Nisa Singha might be young in years, but that hasn’t stopped her from making waves in the city — proof that age really is just a number. 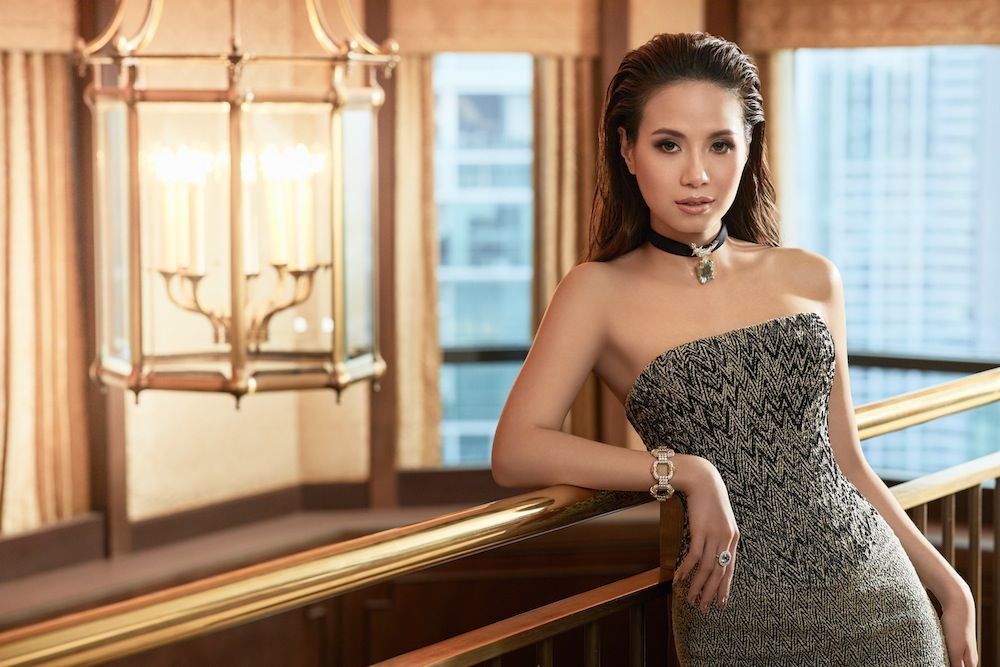 Once part of the sister duo ‘Kat Pat’ with her elder sister Sonya “Kat” Singha, today Pat plays the role of both successful businesswoman and newly-wedded wife. The owner of her own fashion lines — Jetset and then, Kimber — she and Phillip Phenjati tied the knot last November after dating for five years. Having nailed both career and love, it seems the youthful and stunning society belle has life all figured out. But how did she get here, and what lies ahead? Prestige has a chat with her on how far she’s come, as well as her thoughts on style, marriage, and being an Instagram “it” girl.

Her singing debut happened accidentally, but has helped shape who she is today.

During her high school years at Traill International School, Pat and Kat made their debut under music giant RS’s KamiKaze label. When she was 11, a casting crew had spotted her with Kat, and suggested they go cast. “They said they wanted our look exactly because they had plans to create an album of a sister duo. We just went for the fun of it and we actually got it.”

Though things began accidentally, the five intense years of training and experiences that followed had a big impact on Pat’s life. She fondly recalls going on tour across Thailand to promote their songs. “I was still a kid who’d never been to all these places. Kat and I were just wowed by all these provinces we would go to. It was a great memory to be able to travel with my sister and the team — strangely, it went on for weeks but I was never tired.”

There were rough times, but they were worth it.

Being in the music industry is far from easy, and Pat remembers that the perks had to be earned through hard work. “It had its fun moments, but there were days when I woke up and wondered why I couldn’t be like other kids who finished studying and could go home. Why did I have to practice singing or rehearsing for concerts until 11pm?”

Despite that, if she were to go back, she firmly believes she would do it again. “It was a good experience that made me learn a lot and made me more mature than others from my age group. I had to work since I was young and had to meet a lot of senior people. As a singer, I had to go in to discuss the music, the style direction and concepts of everything we were going to do.”

She and Kat are more than sisters — they’re business partners and best friends.

“People are confused when they hear us talking to each other sometimes and ask if we’re actually siblings, because we talk as if we’re best friends,” Pat explains of their relationship, describing Kat as her “other half”. The two also share an online clothing business they started together five years ago — ‘Jetset’.

“Many people kept asking us all the time what jeans we were wearing. That’s when Kat and I decided, why don’t we make jeans to sell if people were so interested? We came up with our own designs and found a factory to produce it. We were among the first online brands that sold jeans back in those days.”

Creating something of her own has always been part of her goals.

“The only singing I will ever do now is karaoke with my friends,” Pat laughs, having moved on from her career in entertainment. Having studied International Business Management with a minor in Marketing at Stamford International University, she’s always wanted to create her own business. Jetset was a first step, and two years after its launch she released her own brand, Kimber, veering onto more feminine grounds.

“Kimber is anything I want to wear or that I feel I would buy. I like to wear dresses and am more girly than Kat, so I wanted to start something more feminine. Jetset eventually also expanded to hats, sneakers and dresses, because no one wears only jeans every day. Kat asked if I was okay with that. I was fine with it, because I feel that fashion shouldn’t be static and that you should keep improving.”

Being the boss doesn’t mean slacking off.

Though she sits at the helm of both brands, Pat remains diligent and determined. “I’m quite committed and go into the office every day. I’m very serious about delivery and oversee all the stocks and spreadsheets.” Her personal drive is reflected not only in the quality, but also in her brand’s customer service. “We deliver every day except on Sundays, because we really focus on service. If a customer needs something urgently, we will even deliver it via Line Man because we don’t want anyone to have a bad impression of our brand.”

While many socialites dabble in fashion for the image, Pat takes her brand seriously and is involved in the whole production process. She even has plans to take short courses in pattern-making and design. “We have tailors, but I feel that I should know how to do things myself too in order to be able to delegate work correctly in case we were to expand or move towards bigger things in the future. I feel that Kimber is close to having a boutique soon and I want it to be really good. Online clothing businesses may not seem difficult to start, but for it to survive for years, to still be able to sell and to potentially open a store, is not easy at all.”

On her Instagram, she only promotes things she actually likes.

On top of being a thriving business woman, Pat is also considered an “it-girl”, with an Instagram following of over 220k followers. While she could easily have opted to take the “influencer” route, she chooses not to. On her Instagram, she only promotes things she would really buy and use, insisting that her social media reflects who she really is. “I know who I am, and in the end, people outside will see that. You don’t need to impress anyone. I don’t think that’s real happiness. It’s kind of exhausting to do that all the time. You should just impress yourself. My pictures [on Instagram] look nice, but it’s not to impress people — it’s to impress myself. When I see beautiful places, I just want to capture that and have a fun history to look back on.”

Despite her influential Instagram presence, she personally isn’t an advocate of constantly living online. “It’s not okay to put yourself on social media too much; people these days are not living in reality anymore. Before, people would really enjoy the little things in life. While on holiday, they’d really care about the view and food, without worrying about getting that photo. Aware of this issue, she makes the effort to stop and appreciate the things happening around her. “I really value the moment and I want to live in it so I try to set a time limit for myself every day. If I’ve already been on my phone for 10 minutes, I put it down and go do more productive things.”

She’s enjoying the married life, and the changes that come with it.

Though her love for fashion and devotion to her business hasn’t changed, being in the lovey-dovey stages of recently-wedded has given her room for more interests. “Now that I’m married, I’m into cooking, gardening and playing piano — my interests have changed completely. I love cooking spicy pasta, I love spicy food. Grilled lamb and salmon, too. I cook for my husband and friends who sometimes drop by.” Her cooking isn’t bad either, “[My friends] say I should open a restaurant and I guess you could say that is now another one of my dreams.”

After five years, their happy-ever-after is indeed something to celebrate. She looks back at their relationship and reminisces on how things have changed. “When we first dated, he was working hard and I was still in university, enjoying life. Now he’s more relaxed and I’m more serious about life and my future. It makes me want to be a more responsible person and more like him, because he’s quite disciplined and serious about everything he does. He doesn’t give up in the middle — and that’s a quality I like about him.”

As she embarks on a new journey, Pat has high hopes for the future. “Now’s the time I feel that I really have to grow up. I need to choose and decide for myself what kind of life I want to lead… What kind of person I want to be, and what kind of lifestyle I want to have. It doesn’t depend on anyone else — it only depends on me now.”

Read the full interview with Pat in the March issue of Prestige, available from all leading bookstores in Thailand.

The online content creator for Prestige Thailand, Mary handles the magazine's digital platforms. She enjoys black coffee, astro charts and listening to entire albums in one go. When not engrossed in a novel or having brunch, catch her on the hunt for new restaurants and the city's latest happenings.