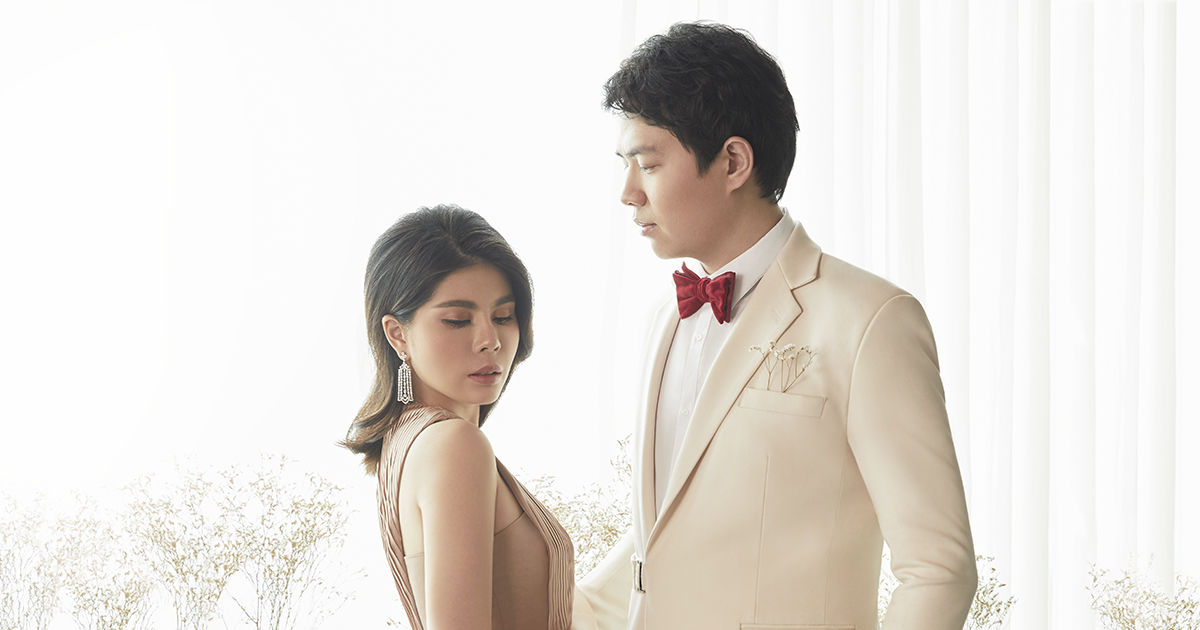 The fanciful and fastidious world of haute couture can seem incredibly elusive — approachable at best through live streaming. To be invited to a show, not to mention being able to work with a famed atelier, seems a very, very far-away possibility. Yet, haute couture is not quite the unapproachable enigma it appears to be, and is a world that young lovers Wipaporn “Som” Jirapatpisarn and Chaiyaphap “Tae” Aunyanuphap are trying to demystify with the launch of their new business venture: Haute Couture Experience (HCE).

First, a little bit of background. Both Som and Tae hail from families with well-established businesses. Som’s father does interior design and construction for luxury residences, while Tae’s side of the family has long been involved in real estate, with properties spanning thousands of rai all across Thailand. Not only that, but as long-time neighbours of Chakrabongse Palace, the Aunyanuphaps also own quite a bit of land along the river, upon which the family is now running several long-standing businesses, including Vivi The Coffee Place. Today, the two are known as the founders behind Ophtus — a highly-successful line of optical eyewear for gamers — not only are Som and Tae a sweet and loving couple, but they’re also very accomplished business partners. “We actually like to tie business to our personal interests,” Som tells us in an exclusive interview, “We don’t see it as work, and it has become part of our lives. We always have fun with our work and think exploring new things together helps to strengthen our relationship.” As their relationship deepened, Som began — as one tends to do — looking out for wedding dresses, and it was this search that led to her discovery and hard-earned welcome into the world of haute couture. The two sat down with us for an in-depth chit-chat, offering insider details about navigating the world of high dressmaking, and how it blossomed into Haute Couture Experience. Here’s what we learned.

Haute Couture is Worth the Price

“I feel that when it comes to weddings, everything immediately becomes overpriced, be it dresses or photographers,” Som admits. Like any woman in search of the perfect dress for her future big day, Som had scoured her share of local wedding studios, and recalls being shocked by the hefty price tags that she felt did not match the quality nor services offered. “It’s ridiculous how the price range is 300,000-400,000 Baht for a wedding dress to be tailored and rented. After paying that amount you don’t even get to keep it!”

“That’s what made me start to contact luxury designer brands and haute couture houses abroad.” Her decision makes a lot of sense. When it comes to weddings, there is nothing as ideal as wearing authentic haute couture, which is essentially the highest pinnacle of fashion and art. Strictly regulated by French law and the Chambre Syndicale de la Haute Couture, not just any brand can define itself under the haute couture umbrella. Brands officially allowed to use the designation of “haute couture” must in fact meet a rigorous set of requirements. For instance, there must be a studio in Paris with no less than 15 full-time staff, and no fewer than 50 designs each fashion season — the list of rules goes on.

As Som reasons, “If you were going to pay that much already [for rental], why not add a bit more for haute couture, which is so much more fun?”

Som’s venture into the world of Haute Couture began around two years ago — a timeframe that exemplifies how the world of high dressmaking isn’t one that is easily entered. Rather, it requires patience and, even more so, highly prized connections. “The contacting process can be tedious and not every bride can wait for six months for a dress,” Som tells us honestly. Phones are rarely answered, getting an email response could take weeks, and price lists are usually only revealed at private appointments at the ateliers. Add to that the highly exclusive nature of haute couture, where designs will only be sold to one client per country, and you have an even longer waiting time as databases have to be carefully checked.

True, the process can be tiresome, but not to the point of being off putting. “The fact that many of my own friends have asked me to take them to tailor something at these haute couture houses, along with many celebrities who cannot contact these brands, made me realise that there was a business opportunity in this passion of mine.” Som explains — hence, the birth of Haute Couture Experience.

Build a Close Relationship with Ateliers

With so many pre-requisites, how exactly did Som and Tae make it into this elusive and fanciful world? The duo attributes their success through priceless referrals, which definitely sped up the process of getting in touch with a haute couture brand. Som reminisces that over the years, the couple have managed to form solid relationships with couture houses and designers — today, emails have even been superseded by the friendly communication of WhatsApp. “We’ve become close, and now they mail us books and we mail some chilli back,” she jokes fondly. Tae recalls attending the after-parties of haute couture shows. “With brands we were close to, we were clinking glasses with their designers at the party,” he tells us — and one can’t help but be impressed by how flippantly the couple can discuss these extremely exclusive event invitations.

It Helps If You Have an Idea that Stands Out

Of course, every journey starts with the first step. For Som and Tae, one of their first atelier relationships was with Dutch fashion designer Iris van Herpen, who is currently designing Som’s haute couture bridal gown. “I think we had the profile of working with Iris van Herpen, so other brands became more open to working with us,” Tae muses. The bridal gown project itself is definitely one to eye — it’ll be constructed in both Amsterdam and Paris, before laser-cut organza petals will be added in Romania. What’s especially fascinating, however, is that the dress will incorporate glass beads made of the same material that the couple are currently using in their blue-light filtering lenses at Ophtus.

“Iris probably agreed to work with us because she thought it was very unusual to incorporate lenses into the design,” Tae adds, “she loves weird stuff, so she was interested in our project. She doesn’t just take any clients either — as someone who does groundbreaking work for music videos for the likes of Lady Gaga or superstars like Naomi Campbell.”

Haute Couture is More than Fashion, it’s an Experience

While the stunning gowns and breathtaking designs are a key part of haute couture’s allure, now that Som and Tae are fully immersed in the scene, they can attest that it comes with much, much more than just the final product. Often receiving invitations to haute couture shows, the two share stories of their various experiences, from intimate conversations with famed designers to clinking glasses with Hollywood royalty. “Last time we went, Celine Dion was sitting just diagonally from us,” Tae says in one anecdotal recount,  “for many people, I think meeting Hollywood stars is another experience that they want, but don’t know where to find it.”

His favourite part, however, is seeing the designers working on their craft. “What I enjoy most though is to be able to visit their workshops and see how these people are truly passionate about fashion and their work.”

“Each of these brands has a fascinating history because it’s been built over some time,” Som adds, “it’s fun to discover stories such as how Schiaparelli used to work with artists like Salvador Dali. It’s not just about buying something expensive. A piece I am acquiring is a Franck Sorbier lace dress that used to be on display at the Caudresien Museum of Lace and Embroidery in France. We aren’t just looking for some stunning haute couture, but trying to source truly meaningful things.”

The Experience that Can Be Shared

Hearing Som and Tae speak of haute couture, it’s clear that this is something the two have genuine love for. In fact, it is this steadfast passion they share for pursuing what they love, that has led the two to where they are today.“We were both given that choice of whether we wanted to work at home or not,” Som explains, telling us that after short stints at various jobs, the couple both had to face the difficult decision of whether they would help with the family business. “It’s that transitional period when you’re 24-25 and if you do [help out with the family business], you will never be able to leave. We both wanted to create something of our own though, so together we founded Ophtus. Both of our siblings have told us that we were lucky to be able to do our own thing and to follow our passions.”

Now that Ophtus is flourishing, the two are switching their attention to Haute Couture Experience, which promises to be yet another exciting venture for the highly talented lovebirds. The service will offer access to exclusive brands, and possibly even secure seats to shows for clients. Another key element is the visual production aspect, which follows each client’s journey with their haute couture creation. Photographers who shoot for Getty Images, or other professionals who’ve worked with global fashion giants such as Fendi, can be arranged as part of the service to capture everything, from your moments at Fashion Week, to fittings at the atelier. Som tells us that she currently has a videographer who’s following her Iris dress across Europe to film how it’s being made. Brides who don’t have the time to fly to Paris for fittings could even opt to rent from a wide range of haute couture gowns, as well as luxury brands.

While some couples prefer keeping work and life clearly separated, to Som and Tae, business is also another way of getting to know each other better, and trying new things together. “I don’t game, but when I go to gaming events I just tell myself that I’m out to experience new things,” Som tells us, as Ophtus is heavily centered on the e-sport scene. “Conversely, going to Haute Couture Fashion Week for Tae is a way for him to explore new things too.”

At the end of the day, with Haute Couture Experience, the two share a similar goal — to share the exciting experiences that comes with haute couture. “It’s possible if you want something tailored, it’s not that big of a deal, but the media likes to blow it up and sensationalise haute couture,” Som tells us. “I just wanted to demystify that.”

To find out more about Haute Couture Experience, visit hautecoutureexp.com. Read more about Som and Tae in our February issue, now available in leading bookstores in Thailand.