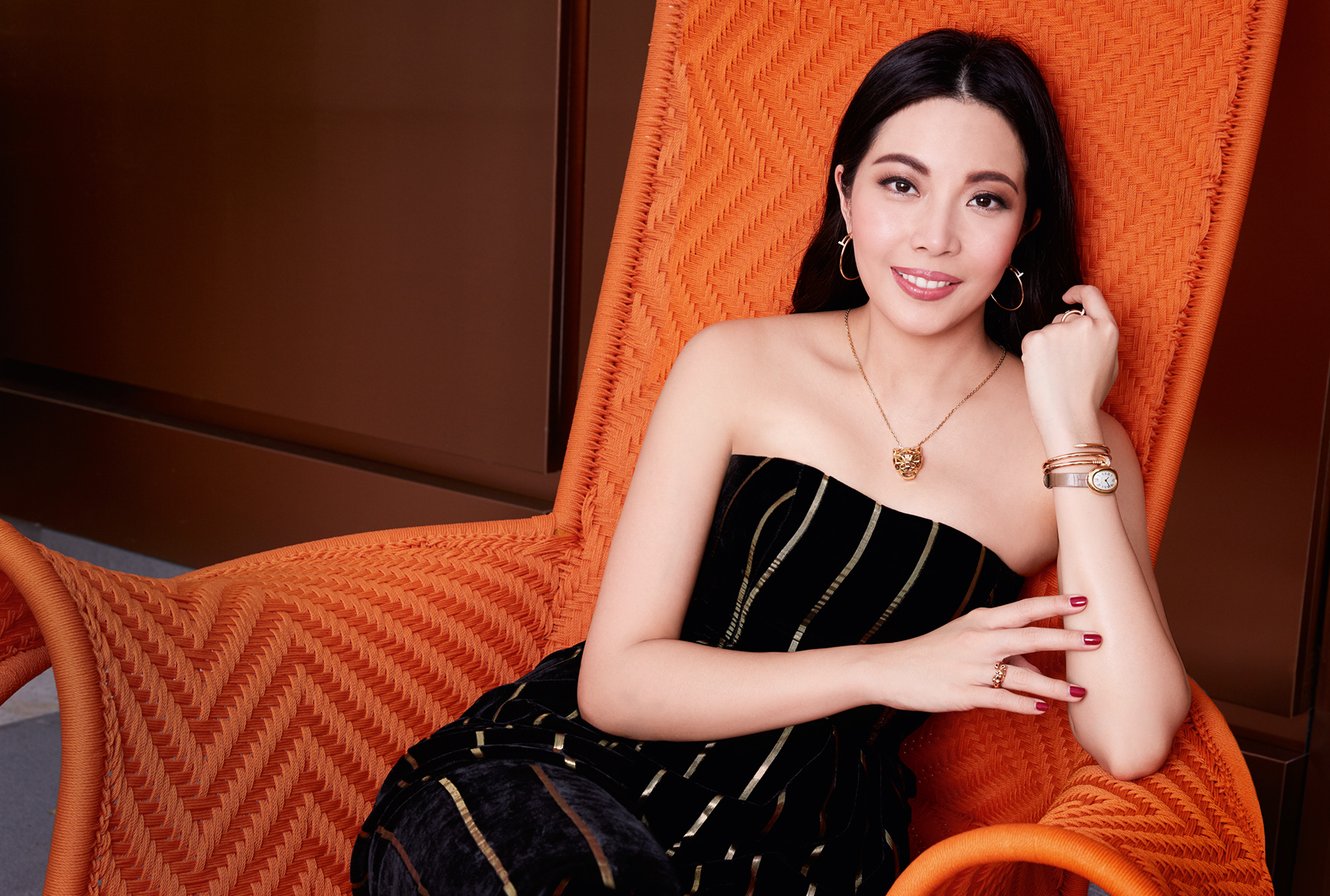 People & Events
Everything to Know About Maepranom Thai Chili Paste, According to Urachar “Japan” Peechasaranont
Share
Next article

Tall and strikingly beautiful, with sweet features accentuated by a feminine yet playful style, 33-year-old Urachar “Japan” Peechasaranont could easily have passed for Thailand’s representative at a beauty pageant. Yet her soft, calm demeanour and an underlying streak of sharp intellect gives away the fact that she is much more than a very pretty face. The eldest daughter of Pranom Daengsupha — the founder of Maepranom Thai chili pastes — the young, third-gen seasoning heiress is now the main force spearheading her grandparents’ empire. We sat down with this go-getting businesswoman and mother of two to talk about her views on motherhood, running a family business, and the future of Thai spices.

Maepranom originated from a man’s love for his wife and the food she made.

For the past 60 years, Maepranom has been steadily expanding on its penchant for offering the flavourful and fiery, with a growing range of pastes, sauces, instant seasonings, and ready-to-cook products — all of which can easily be found in Thai kitchens, supermarkets, and even on the global stage. While the brand has become synonymous with cravings for all things Thai and spicy, Japan tells us that the “Thai chili paste and chili sauce are leading products that are still our main sources of revenue. In fact, the market research we did with AC Nielsen reveals that our chili sauce, used for dipping with chicken, remains the number one best-seller in Thailand.”

Today, Maepranom might be known as a billion-Baht business, but Japan reminds us that 60 years ago it started off as a modest staff-of-four enterprise. She attributes the business’s success to her grandfather, who she also looks up to as her biggest influence. “He is my biggest inspiration because he started out with nothing. He moved to Bangkok from the countryside and did all sorts of odd jobs before starting this business. And it simply came from the idea that his wife made delicious food, so why not package it to be sold? They started out by selling chili paste in glass jars to houses and have gotten to where they are today.”

Half a century later, Maepranom is still rooted in family.

Now directing manager of Piboonchai Maepranom Thai Chili Paste Co. Ltd., Japan is the one mainly responsible for continuing the legacy of her grandparents’ seasoning company. She is joined by her two younger sisters Thanaporn and Suraporn Pasaprates, who take care of international marketing, and hands-on operations, respectively. From grandparents to grandchildren, the entire family has always lived within the same home. A clear element of family prevails in the business — to the point where Japan’s mother still has trouble letting go of her responsibilities completely. “She really should rest, but my mum still comes into the office every now and then to make sure we’re doing alright,” Japan tells us, “even my grandmother drops in too sometimes, because I suppose being at home can get pretty lonely.”

She recalls a childhood where both familial relationships and work came as a package deal. “I’ve always been surrounded by the business ever since I was a child. My grandmother would always cook for us, and she’d use her own products in her cooking. Her cooking was delicious! She’s 84 now and is still strong enough to go on holidays with the family. Although she doesn’t cook anymore, she’s already taught our cooks at home how to prepare dishes just like the way she used to.”

Having always focused on quality, their next step is healthy chili paste.

While most know Maepranom for its satisfyingly spicy pastes, the company also stands by uncompromising quality — no MSG, artificial colours and preservatives are found in their products, and the brand is even taking a step towards healthier options. The brand recently received a Low Sodium Award, and you can now get sweet chili sauce sweetened using stevia leaves instead of sugar — appealing to the needs of increasingly health-conscious consumers. Japan tells us that they are also looking into controlling the greasiness, sweetness, and saltiness of their products.

“We actually have to try to create more things that can be enjoyed with salads, because people eat less rice these days,” Japan tells us, “people are just eating vegetables! Back in the day, the namprik narok (shrimp flavoured chili paste) is something you’d eat with rice, but last year we released ‘Crunchy’, which comes in a form that can be sprinkled over salads. We do a lot more these days beyond sauces, and it’s exciting as food continues to evolve.”

The Maepranom flagship at Iconsiam is home to over a hundred different flavours.

On the ground floor Sook Siam section of Iconsiam, you’ll find a temple of flavours from Maepranom, including less ubiquitous and rather eccentric seasonings — cue the likes of chili paste with olive oil, sweet chili sauce with honey, and even pineapple chili sauce. Japan shares that you’ll find some of her personal favourites here as well, including Maepranom’s ‘Lazy Sets’, which will have consumers cooking up green curries and more in just 10 minutes. For the hungry store visitor, freshly-cooked pad Thai and irresistable servings of Thai chili paste fried rice with shrimp are also available.

As a sign that Maepranom — despite its’ strong heritage — is more than ready to move ahead with the times, guests at the Iconsiam flagship will also find a instagrammable limited-edition collaboration with Pretz, which was inspired by a Pocky exhibition Japan saw during a trip to Japan. “I thought it would be such a monumental achievement if we were to merge each brand’s strengths to create an exciting product,” she tells us, adding with a wink, “they aren’t as flavourful as I’d like them to be though, but it’s also targeted towards foreigners and children, so it can’t be too spicy.”

The secret behind Maepranom’s success? Not being stingy.

When asked about who inspires her, Japan lets us in on a life lesson from her grandmother Pranom herself — one that has stuck with her up until now. “My grandmother always taught me first and foremost that if you want to start a business, you cannot be stingy. You have to do it well. And when a product is conceived you have to make sure that it is something you would enjoy as well before you can sell it to others.”

This generosity not only applies to money, but also effort. Japan looks back wistfully at a childhood spent watching her family members hard at work. “Both my grandfather and mother were workaholics,” she tells us, “my grandfather is such a great role model and example for all of us, and then there’s my mother, who continued his legacy and worked alongside him — from the nitty gritty of getting our logo registered to buying actual machinery. Since I was a child, I have long seen them both in action, from talking to engineers building our factory to negotiating with customers.”

Of course, a good work-life balance is still always ideal.

“Seeing [my family] like that made me feel that it’s normal to work and think about it all the time,” Japan admits, “but I’ve started to cut back ever since I had children.” Today, the mother of two puts priority on maintaining a solid balance between work, and time spent with her civil servant husband Akkamate Peechasaranont, along with her son and daughter Raththi and Nadeen.

“I try to always have time for the kids, because I feel that  family can be strong and a child can grow up happy only from a solid foundation, where parents are caring and understanding. I always have to read to them at bedtime. If they are on summer holidays, I bring them to make merit in the morning because I want them to absorb Thai traditions and culture even though they are studying in an international school. My own parents too used to bring me and my sisters to the temple and countryside every week to see what life was like.”

Alongside her roles as businesswoman and doting mother, Japan also puts aside time for her own interests through her own skincare brand, To Be Kind. The pastel-packaged selection of products originated when she was pregnant and wanted to use products that were child-friendly, and ended up creating her own. In fact, one of her New Year’s resolutions for 2020 is to have her beauty brand gain success abroad.

And family conflicts should stay within the family.

Looking at the oval Pranom logo stamped on all products old and new, it seems that the family’s recent scandal has been firmly left behind — the previous brouhaha where siblings and parents sue each other over the family fortune is now definitely over, with family members left content and relationships intact. From the highly  publicised and stressful ordeal, Japan only states her belief that such misunderstandings should be kept within the family.

“I feel that it’s something that shouldn’t have happened, even more so when you are siblings and could have talked it over. When others know too, it’s not like it could have helped with anything. Whether you win or lose in court is not something that needs to be proclaimed for the world to know.”

As for her own family, Japan just hopes her children walk forwards without fear.

“My parents taught us that they would only give me what they had, and if I wanted more I needed to find it for myself. They have always taught me that I had to work. Many children have parents who hand everything to them, but if you don’t know how to earn and create more, one day it will all run out.” When asked whether she has any expectations of her own children, she tells us that her focus is on determination without fear.

“I always tell myself that if you love what you do, it will always come out good. You can only learn and have experiences by making mistakes, and this is what makes you stronger in handling future problems. I always tell my kids to never fear making mistakes, or getting told off for doing something incorrectly. We trip and fall in order to learn how to get up again.”

This article is just an excerpt of our full cover story. Find out more about Urachar “Japan” Peechasaranont in our December issue, available in all leading bookstores nationwide.