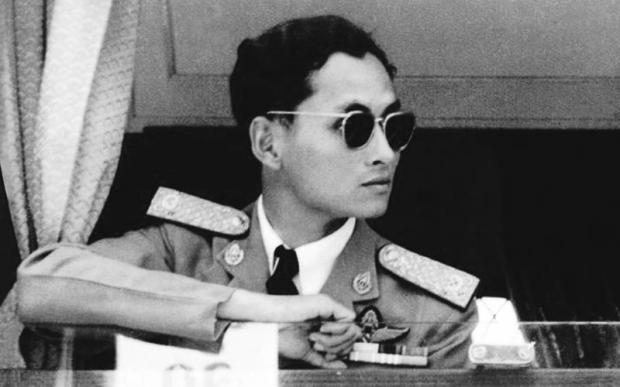 Today marks the anniversary of HM the late King Bhumibol Adulyadej’s passing. It is unarguably the saddest day in the history of modern Thailand as the entire nation was stricken by grief and the feeling of loss beyond comprehension. Losing a beloved monarch who had time after time guided the nation through its many crises and built the life and future for those who had none isn’t an easy wound to heal. The pain might cut deep, but we can cherish the fact that his teachings and guidance continues to live on, and light our way.

With HM the late King Bhumibol’s reign spanning 70 years through the birth of television and modern photography (and the King himself was an avid, expert photographer), we have seen countless images and videos of our beloved king through both local and international media channels. However, there remain a number of invaluable recordings, still or moving images, that most people do not have a chance to admire. One of those rare materials have been preserved and listed as film heritage by Thai Film Archive. They have been posted by the cinematic conservation body over the years and Prestige takes this opportunity to share its most watch-worthy collection here.

Following HM the late King Bhumibol’s royal visit to the North and the Northeastern after his coronation, the royal family travelled to the south in 1959. The recording recounts key events during his long journey, which included travelling by train to Chumphon from Bangkok, and then by car to Ranong, Phang Nga, Phuket, Krabi, Trang, Songkhla, Satun, Pattani, Yala and Narathiwat. Watching this one-hour long video is like seeing the true beginning of the reign of the greatest monarch who treaded the path untrodden to witness the sufferings of his people with his own eyes, in order to find a way to relieve them of pain and poverty.

Following his return to Bangkok in 1950 and his coronation ceremony, HM King Bhumibol decided to be ordained from October 22 to November 5, 1969. Television business started in the same year, but production and broadcasting range remained very limited. The ceremony was thus recorded in film by the United States Information Service and this 13-minute mini-documentary has become one of the most valuable footages in the history of Thailand, in which people could admire the king’s daily routine as a Buddhist monk.

Another precious cinematic treasure preserved by the Thai Film Archive, this documentary of the first official visit to the United States of His Majesty King Bhumibol Adulyadej and his family was produced in 1971 by Thep Phanom Production Company in conjunction with the United States Information Service, the former name of the Public Affairs Office of the U.S. Embassy in Bangkok. The colours are stunning, and the video captured historical moments of HM King Bhumibol’s return to his birthplace and meeting president Dwight D. Eisenhower after being welcomed to Desilu Studios by film legends like Bob Hope. The highlight is none other than His Majesty’s speech at the Congress. Also, we are really smitten by HM Queen Sirikit’s style choices throughout the visit.

The one and only film ever produced by the National Identity Office at Office of the Prime Minister to celebrate the 50th anniversary of HM King Bhumibol’s ascension to the throne, The Musical Monarch portrays the musical ingenuity of the king. Evoking the king’s best-loved compositions, the 70-min movie tells the story behind each song and its relation to real-life happening, be it the king’s personal story or incidents in the country he ruled.