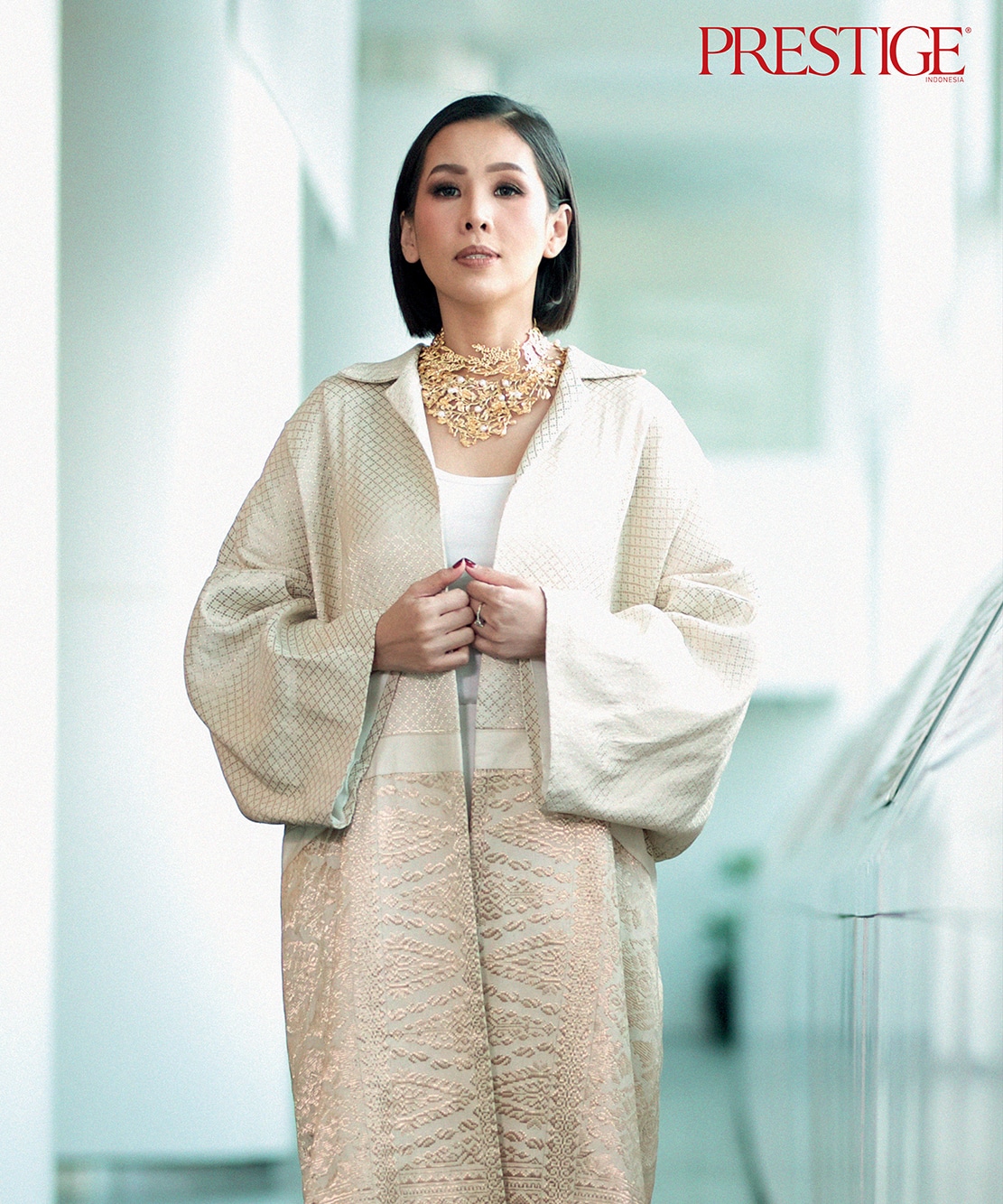 Have you eaten yet?” This is the first question Renitasari Adrian asks us after the introductions have been completed. It turns out that she has had her birthday three days before our interview. When the Prestige team reaches her office at Galeri Indonesia Kaya, it turns out that she has just received a special delivery: a huge nasi tumpeng.

Spontaneously, and excitedly, she asks us to share the yummy Indonesian version of birthday cake with her. She repeats the offer over and over. Then, “I’m sorry I’m such a mom sometimes,” she laughs. “It’s habit, I guess. I like to look after people.”
Renita is Program Director of Bakti Budaya Djarum Foundation, which focuses on developing Indonesia’s arts and culture scene through support for the performing arts, as well as helping artists to evolve and expand their talents. The foundation has supported more than 3,000 cultural activities to date, working with artists since 1992 to preserve and develop Indonesian art and culture.

Starting with the foundation in 2007 as Corporate Communications Manager and managing the sports, environment and education programmes, Renita took up her current role in 2010. She oversees the Bakti Budaya programme for Indonesian cultural events, mainly involving the performing arts.

“Since the very beginning, the founders (of Djarum Foundation) have always been keen on promoting art and culture in Indonesia,” Renita says. “They understand that Indonesia has so many talented artists who are very undervalued, while we also have so many resources that need to be nurtured. We have more than 17,000 islands with their own languages, arts and traditions. We should really look after that precious and unique legacy of ours.

“As Program Director, I was given the task of stepping up the foundation’s cultural programmes. One of the questions we faced was how to make the performing arts sexier, more attractive, to the public, especially the younger generations.”

But has she always been personally interested in Indonesian art and culture? “Yes, I think it goes way back to how I was raised by my parents, Renita says. “Back in the day, parents always instilled our culture in us since we were kids. For example, they signed us up in an arts studio to learn traditional dance. So, growing up, you knew how to do at least one traditional dance.

“Every weekend, my father and grandfather would ask a puppeteer to come to the house to orchestrate the Wayang Golek. I admit there was not so much competition in entertainment back then. In those days, we had only one TV station!”
Working alongside artists gives Renita rare insights into their mindsets and what they actually need to expand their talents and creations. A theatre production in Indonesia doesn’t last for more than two days in places like Teater Jakarta or Gedung Kesenian Jakarta.

One exception would be Teater Koma, which has been around for a really long time and has a big production team. It can prolong a show to two weeks of performance. These artists feel like they need a place where they can regularly showcase their work, and they voiced that idea to Renita. She took the concept to the foundation’s internal board, and from these discussions came the Galeri Indonesia Kaya project.

A public space for art and culture inside a mall? Why not? Galeri Indonesia Kaya was launched at Grand Indonesia in 2013 to enable Indonesian artists to express themselves and give the Jakarta public regular, good-quality performing arts shows. The gallery has curated shows every weekend and equipped with so many information and interactive games about Indonesia’s art and culture.

Galeri Indonesia Kaya is accessible to all thanks to its digital platform at indonesiakaya.com. Its YouTube channel also has a web series about Indonesia’s culinary and travel attractions. Last October, the foundation launched Taman Indonesia Kaya, a public space complete with an open theater, in Semarang.

Says Renita: “The thinking is that we really want to educate people about our own art and culture, and to help them appreciate it more. Because if not us, then who else is going to do that? We are ambassadors of our own culture.”

Djarum Bakti Budaya’s most important current project is bringing Indonesia’s performing arts to the world through Indonesia Menuju Broadway. The foundation is auditioning new talents with an eye to them becoming good enough to perform on Broadway. The aim is to make performing arts “cool” for the masses, because Renita realises that appealing to youth is difficult.

“Surprisingly, the reception has been really great,” she says of the project. “We do have a lot of young talents who can sing, dance and act all at the same time, as you have to do on Broadway – and that makes us really proud! We will try our best to accommodate their talents. Even if they don’t make it on Broadway, we will always nurture them and have a place for them here.”

Showing us videos of some of the auditions, Renita goes on: “Watching the performing arts live is a quite different experience from watching a film. There’s an interaction between the performers and the audience that you don’t get with a movie. The foundation has sponsored a lot of big productions in Jakarta theatres, and we do see the interest among the public.

“The funny thing is that the VIP section usually sells out very quickly compared to the regular seats. So it means that we do have the interest of the audience and the work and resources from the artists. We need to do the facilitating work and communicate it to the masses more. At the end of the day, a big production will have an impact on the economy, as it will employ a lot of people, and that’s one of the foundation’s goals with this programme.

Renita is the mother of five children, all females. Her eldest is 25 years old and the youngest is 16. This is both her and her husband Ryan Adrian’s second marriage. In the midst of her busy life, she still likes to spend her time with her family.

“I enjoy travelling and cooking Indonesian food,” Renita says. “Every Friday, I wake up and imagine myself shopping for ingredients and cooking over the weekend! My kids are all grown, up so we only do holidays together once a year. They have their own lives now.”

Renita has been an independent woman since she was very young, as she comes from a broken home. Her parents divorced when she was a child. At the age of 13, she says, she grew up, realising that she had to manage her own life from then on. She set out to inspire her own daughters to have the same sense of resilience.

“I think one of the biggest lessons I’ve learned is that I have experienced so many failures, yet I managed to get back up again,” Renita says. “I have no fears in life anymore, except for God. And after those experiences, I have so much gratitude towards life and accepting imperfections. Because the more effort we devote to perfection, the harder it is to make peace with yourself.”

Talking about her daughters, Renita expresses her wishes for them as they blossom into young women. “I have taught them to be independent, because I won’t always be around. We never know what will happen. I must accept the fact that I had to live without my parents when I was a kid, and that’s why I taught them to become tough, independent women. I also urged them to work hard to get what they want, because dreams don’t come true unless you keep your focus and be consistent.”

Renita has big hopes and dreams for the future. “Everything we do with the foundation is to make an ecosystem for the creative industry, especially the performing arts,” she says. “In the future, we hope to be able to build a theatre of an international standard in Jakarta so that we can facilitate creativity even more.”