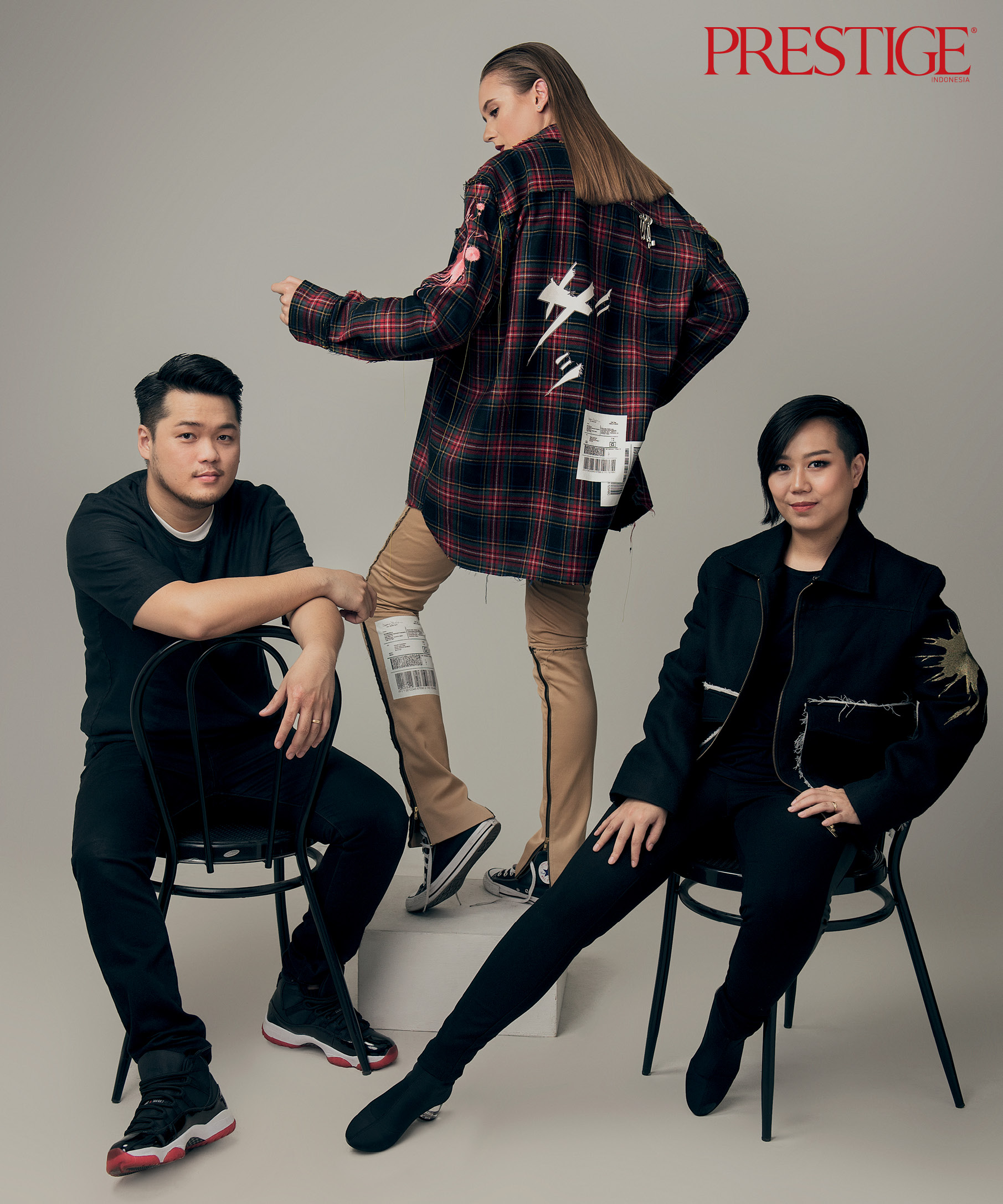 Sean Loh and Sheila Agatha Wijaya, founders of the Sean Sheila brand, have succeeded in spite of being a most unusual couple. They say their ready-to-wear is “not just a label”, and they happily describe themselves as “weird” during a lively interview with
Liviani Putri.

Sean Loh and Sheila Agatha Wijaya, the creators of the Sean Sheila ready-to-wear brand, are a couple of fashion designers who certainly do stand out from the crowd. Who else is inspired by such obscure concepts as Japanese gangsters’ woman, images of the homeless childrens in Russia and the idea of decomposition and decayed plants to create fashion collections?

“Weird – that’s our characteristic,” laughs Sean, as Sheila nods enthusiastically. “It’s where our identity shines through. That’s how we see ourselves. We find unusual images in books and movies, and we follow important social issues and things that attract and inspire us. We use fashion as our platform to express our perspectives.”

He pauses for thought, and Sheila strikes in: “In the past, we were really struggling, trying to fit in. We were trying to figure it all out. How are we going to sell our collections? Are we too weird? We were trying to cover the basics, but it wasn’t working for us. How were we going to survive in the industry, yet still be true to ourselves? To figure it out, we spent four seasons trying different things.

“We found that fall/winter is our best season. We’re in our comfort zone there because we are confident about doing layers and playing with heavy fabrics and textures. Then we realised that just being able to design is not enough to make it in this business. We had to learn sales and marketing – through trial and error. The mistakes we made could have been avoided if we had done internships before starting our own label, but we hadn’t. So it’s been quite a journey for us. Starting from the fall of 2017, I think we began to feel more confident about ourselves. You could see more structure and variety in our work.”

The brand releases two collections each year, and launches them for wholesale buying in showrooms during Paris Fashion Week. “For ‘The Abandoned Collection for Fall/Winter 2018’,” says Sean, “our inspiration came from images of homeless childrens in Russia. Keys, pins, tapes and patchwork became our statement items. We created a deconstructed design to show that creativity can break through limitations.”

Notes Sheila: “Going to Paris for fashion week is great for business because that’s where we get to meet buyers from all over. Thanks to the connections we have made, Sean Sheila can be found in EgyptBoutique 51, Cairo; ARA and Masari Shop, Jakarta; Le Charme de FiFi et FaFa, Tokyo; Society A at Ngee Ann City and Society A x Tang’s in Singapore; Sauce, Dubai; and Fenwick, London.”

Sean Sheila is available in multiple department stores and multi-label boutiques around Southeast Asia, as well as various stockists in Japan, and the United Kingdom. Indonesia’s Masarishop website describes the designers as having “a dedicated focus on empowering women with high-quality fabrics and dramatic silhouettes. We love the use of layering and their approach to embroidery.”

As we get ready for the photo shoot, Sean and Sheila keep themselves busy by styling their model. How well the two designers communicate and work with each other soon becomes apparent. They bring a cheerful, positive vibe to the studio.

“Currently, we are preparing our spring/summer 2019 collection, which will be showcased at Paris Fashion Week in September,” Sheila tells us. Sean adds: “The inspiration for this comes from the idea of decomposition and the relationship between plants and plastics. We have taken our textures from decayed wood and plants.”

The way Sean and Sheila handle our questions is interesting. They are connected, and they often complete each other’s answers. “That’s the joy of working together as a couple,” Sean smiles. “But since you are inseparable everything is going to be mixed up between work and private life. We always talk about work, and sometimes we argue.”

“But anyway, it’s fun working together as a team,” Sheila interjects. “The brand started after we won the Harper’s Bazaar Award. We decided to build on that momentum by launching our own label.”

Their first collection, for fall/winter 2014, was called “Shoko Tendo”. It was inspired, believe it or not, by yakuza lore and the designers’ unique take on the kimono. “It was a big hit at Sydney Mercedes Benz Fashion Week 2015, which surprised us most,” says Sheila. “Suddenly, we began to receive invitations to exhibit at many international fashion shows. This was a great opportunity for us to gain recognition overseas. In 2016, we received a New Emerging Brand of the Year Award from Elle.”

Says Sean: “Our design aesthetic embodies eastern traditional cultures. For example, we feel it’s important to preserve the rich and diverse cultures in Indonesia by infusing traditional Indonesian craftsmanship with modern silhouettes and contemporary aesthetics. Our brand DNA lies in its application of hardware materials, along with the signature embroidery techniques used to create men’s and women’s clothes.”

Also visit: Patrick Owen’s on his latest Re: Mata collection and refusing to play by the rules

Sheila takes up the conversation: “Indonesian culture is very rich in terms of traditional fabrics and craftsmanship, and embroidery has played a major part in our culture for generations. But I think to interest the younger generation, it has to be something fresh, relevant and inclusive. That’s why it’s a challenge for me to bring embroidery to the contemporary level, and it’s becoming our design signature design.”

Talk of the beauty of Indonesian embroidery leads them on to the subject of sustainable fashion and Sheila’s hometown of Purbalingga, Central Java, where they have a studio. “In 2011, I watched a lot of special needs people doing tailoring work and making false eyelashes and wigs. They are talented! To tap their potential, we decided to employ students from SBL Negeri Purbalingga. Each employee is trained for two to four years, from the basics of sewing to creating our embroideries. We believe that this will serve them well and allow them to become masters of the craft.”

Believing that the concept of sustainable fashion is not just about the materials you use, but also about giving back to society, employee welfare issues are important to the couple. “We provide our workers with decent lodgings and food, and we pay them higher wages than the industry minimums. In line with our beliefs, they are also paid commissions for each garment they produce,” says Sheila. “To communicate with our people, we learned sign language. We’ve even had to create our own signs for the techniques that don’t exist in the Indonesian sign language vocabulary!

“I have to admit that at first, we didn’t want to do it. We didn’t specifically think about working with special needs people. It was just in my hometown, where my studio is, that there are huge numbers of tailors who are talented but disabled. We decided to train them as a way of giving back to the community. The idea was to try to elevate Indonesian crafts by helping special needs people.”

Sean and Sheila are ambitious to expand globally in the next three years. Having conquered Southeast Asia, they want to extend their brand into bigger markets, such as China, the Middle East, Europe and the US. With a growing range of product offerings, the designers say Sean & Sheila will continue to be a ready-to-wear brand that offers customers “a touch of tradition with a unique perspective of modernity”.