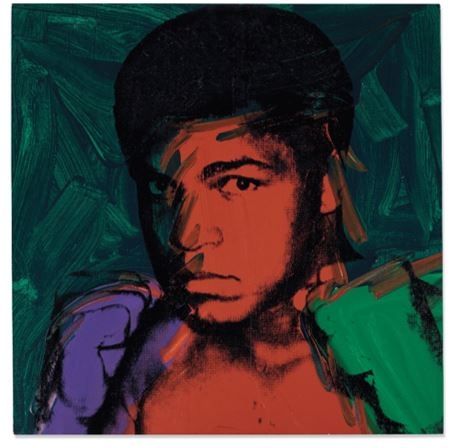 Avid art collectors can get ready, as the multi-coloured masterpiece, ‘The Greatest’, will be offered during Christie’s Post-War and Contemporary Art Evening Auction this upcoming February 20. ‘Muhammad Ali’ comes as part of a set of ten stunning silkscreen portraits of sports giants from the 1970s, including tennis player Chris Evert, golfer Jack Nicklaus, and soccer player Pelé.

This series, completed by Warhol between 1977 and 1979, came to life at the bequest of art collector and sports enthusiast Richard Weisman. At the time, the Pop artist was unfamiliar with the athletes that Weisman selected for the series, with the art collector even saying that “Andy didn’t really know the difference between a football and a golf ball.”

Warhol photographed every subject of the series with a Polaroid Big Shot camera, before translating the photographs to acrylic and silkscreen ink on canvas. The Pop artist met the legendary boxer, who had then defended his title an extraordinary nine times, at his training camp in Pennsylvania in August 1977.

As Christie’s pointed out, the encounter between the two men was quite eventful, with Ali asking Warhol, “white people gonna pay $25,000 for my picture?!”

As did several canvases of the “Athletes” series, “Muhammad Ali” appeared in magazines and billboards across America to promote sportswear, cars and even breakfast cereals, prompting Warhol to declare that “the sports stars of today are the movie stars of yesterday.”

Now hitting the auction block at Christie’s London, the colourful portrait of “The Greatest” is expected to sell for between £3 million and £5 million (around $3.9 million and $6.5 million).

Last November, another set of Warhol’s “Athletes” series was offered as individual lots at Christie’s in New York, amassing a total of $15,014,000.

Ahead of Christie’s Post-War and Contemporary Art evening sale, highlights of the auction will go on public view from February 8 at Christie’s King Street galleries in London.

Sign up to get the latest luxury and lifestyle news delivered to your inbox.
ART Auction Christie's andy warhol art auction
AFP Relaxnews
art and culture