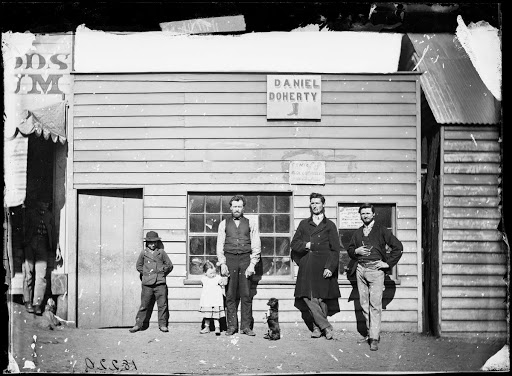 In a Sydney garden shed, a trove of 3,500 glass plate photos were discovered from the 1870s Australian gold-rush. The find — now referred to as the Holtermann Collection — was made possible by an inquisitive photography magazine editor acting on a hunch.

In 1951, Keast Burke — then the editor of Australasian Photo Review — had written to Sydney’s Mitchell Library, asking about Bernhardt Holtermann, a name associated with several 19th century photographic panoramas he’d seen in the building. Librarian Phyllis Mander Jones replied that Mary Holtermann, the daughter-in-law of the German immigrant who made his fortune during the Australian gold rush in the 1870s, lived in the leafy suburb of Chatswood and might have his photographic plates.

The garden shed, it turned out, was stacked with a cache of 3,500 glass plate negatives in cedar boxes and smaller ones in lacquered tins. At least one case held a number of huge glass plates measuring 90cm x 160cm, among the largest ever found from the 19thcentury. The negatives, which lay undisturbed for nearly 80 years, were donated to the Mitchell Library in 1952 by Bernhardt Holtermann’s grandson, Bernhard, CORRand became known as the Holtermann Collection.