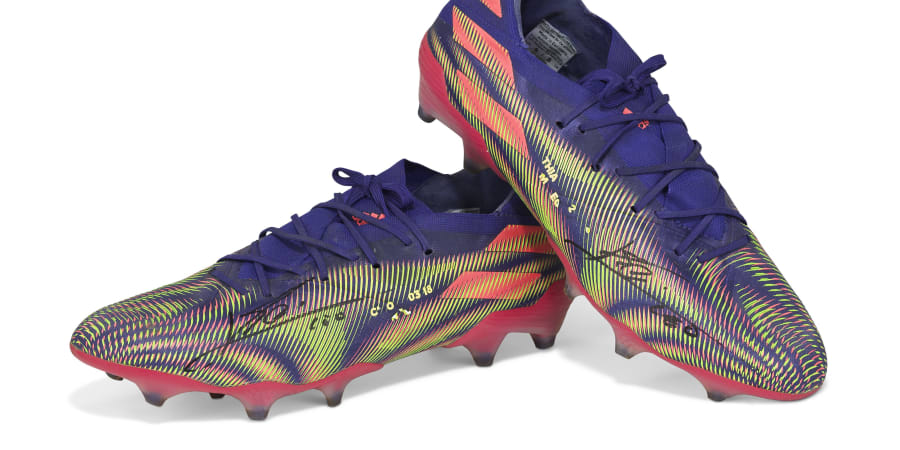 Soccer fans, take note! Christie’s has announced the sale by online auction of the boots worn by Lionel Messi when he scored his 644th goal for FC Barcelona, setting a new record for the highest number of goals scored by a single player for any club. The legendary Argentinian forward’s footwear is expected to fetch between 57,500 and 80,500 euros.

On December 22, 2020, in the 65th minute of a match between FC Barcelona and Real Valladolid, Lionel Messi scored yet another goal, having been served by a clever backheel from Pedri. The Argentinian’s lethal finish, which gave his team a 3-0 victory, also made history. With this 644th goal in 749 official matches for Barcelona, Messi broke Pele’s long-standing record for the highest number of goals by a player for a single club.

Initially exhibited by the Museu Nacional d’Art de Catalunya, the boots worn by Lionel Messi on that historic occasion, a pair of Adidas Nemeziz Messi, will shortly be auctioned off, with the proceeds being donated to the Arts and Health Project of the Vall Hebron University Hospital in Barcelona.

“Achieving the record of 644 goals for the same club made me very happy, but the most important thing is being able to give something back to all the kids fighting for their health,” commented Lionel Messi in a press release.

Signed and accompanied by a certificate of authenticity, the legendary soccer international’s footwear will be the most closely watched lot in an online sale that will take place April 19-30 on Christies.com. The boots are expected to fetch a price of between £50,000 and £70,000 (approximately 57,500 to 80,500 euros).