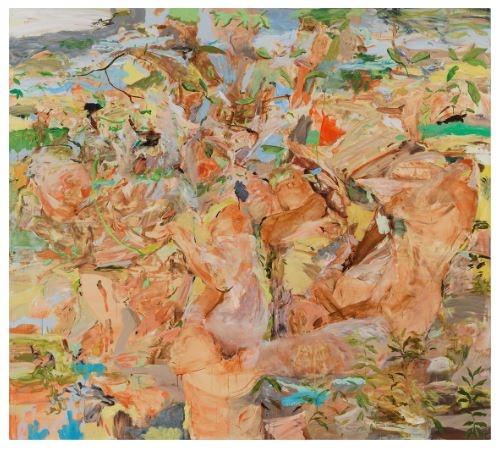 Gagosian launched an online viewing room dedicated to Brown, which ran from May 4 through 10 to coincide with Frieze Week.

The digital platform featured a slew of video content that introduced audiences to the British contemporary artist, including a clip in which Gagosian director Deborah McLeod discussed Brown’s market ascent and her 2001 masterwork “Figures in a Landscape 1.”

“It’s an iconic masterpiece that looks back in dialogue with our history and will hold up for generations to come, a masterpiece for the twenty-first century,” McLeod said of the painting in the video. Gagosian has now announced that “Figures in a Landscape 1” successfully went under the hammer for $5.5 million, marking the second-highest price reached by one of Brown’s works at auction.

Brown’s current auction record of $6.7 million was set in May 2018, when “Suddenly Last Summer” went well above its high pre-sale estimate of $2.5 million during Sotheby’s Contemporary Art Evening Auction in New York. “Figures in a Landscape 1” also marks Gagosian’s priciest online sale since Albert Oehlen’s “Untitled” (1988) fetched $6 million in March, as part of a viewing room that coincided with Art Basel Hong Kong.

Meanwhile, the mega-dealership sold more than 40 works through its online viewing platform since closing its galleries on March 13 in reaction to the COVID-19 pandemic. Additional notable sales include Georg Baselitz’s “Die andere Seite vom Ölfleck (The other side of the oil stain)”, which fetched €1.2 million ($1.3 million); as well as Mary Weatherford’s mixed-media work “Splendor in the Grass,” which went under the hammer for $750,000.

Gagosian also expanded its digital offerings in April with “Artist Spotlight,” in which the mega-gallery presents a single work by a different artist along with pricing information on its website for a 48-hour period. So far, the initiative has highlighted the oeuvre of artists like Sarah Sze, Roe Ethridge, Stanley Whitney and Titus Kaphar.

“Artists work for years to produce bodies of work and prepare for exhibitions, and when every gallery and museum in the world has to close, the disappointment touches everyone: the public, curators and critics, art handlers, shippers, clients. But it’s especially hard for artists, and this pause on exhibitions is unprecedented,” Larry Gagosian said of “Artist Spotlight” in a statement.

10 of the Most Expensive Dog Breeds in the World