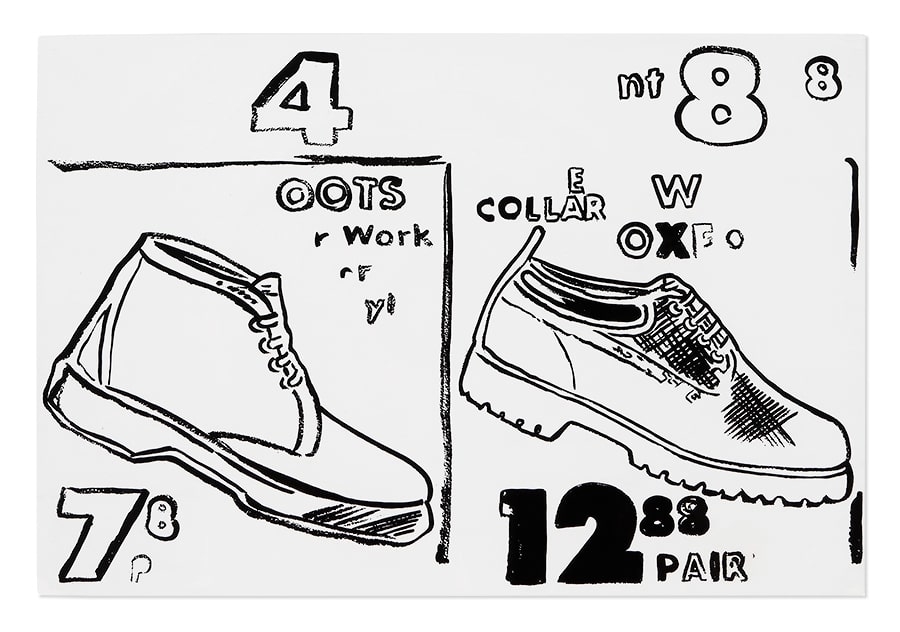 Auction house Christie’s has launched a new series of thematic online-only sales from the Post-War and Contemporary Art department.

All images in the story courtesy of Christie’s.

Titled “VICE” and “VIRTUE” respectively, the auctions are described by Christie’s as representing the two opposing sides of human nature. On the one hand, you’ve got “‘VICE’, which captures the myriad ways of worldly escape in its selection, reflecting our long-held humanistic tendency to chase pleasure.  ‘VIRTUE’, on the other hand, turns inward, featuring art indicative of hope, wisdom, happiness and warmth from worlds both real and imagined,” the house added in a statement.

Two works by Andy Warhol are hitting the auction block as part of “VICE.” “Work Boots (Positive)” (above, see main photo) is expected to sell for between US$250,000 and US$350,000, while “Electric Chair (Retrospective Series)” is estimated to go for a more affordable US$50,000.

The Pop artist’s silkscreen portrait of Chris Evert, entitled “Chris Evert [Sixteen Works],” is rumoured to fetch between US$300,000 and US$500,000 as part of “VIRTUE.”

This online auction, open for bidding from May 29 through June 12, will focus on the idea of virtue as a creative escape. “VIRTUE” will include a selection of works that play with visual iterations of themes like prudence, fortitude, temperance, justice, faith, hope, and love.

The entire catalogue of the digital auction will be released in the coming weeks on Christie’s website, where a viewing room for “VICE + VIRTUE” is currently available.

What’s your vice? ⠀ .⠀ We’re excited to announce the launch of VICE and VIRTUE, a series of thematic online sales of Post-War and Contemporary Art that speak to our collective reality during this time of global interruption.⠀ .⠀ Beginning with VICE from 12-27 May and continuing with VIRTUE from 29 May 29-12 June. ⠀ .⠀ Celebrating the human desire for escapism, VICE provides a reprieve from our new reality with offerings by Barbara Kruger, Richard Prince, KAWS, and other artists who capture the essence of hedonistic pursuits.⠀ .⠀ Whereas VIRTUE focuses on the idea of virtue as a creative escape with work that plays with visual iterations of the seven virtues (prudence, fortitude, temperance, justice, faith, hope, and love). ⠀ .⠀ VICE — 12-27 May, online.⠀ VIRTUE — 29 May-12 June, online.⠀ .⠀ #art #artist #vice #virtue #onlineauction #postwarart #contemporaryart #artcanhelp