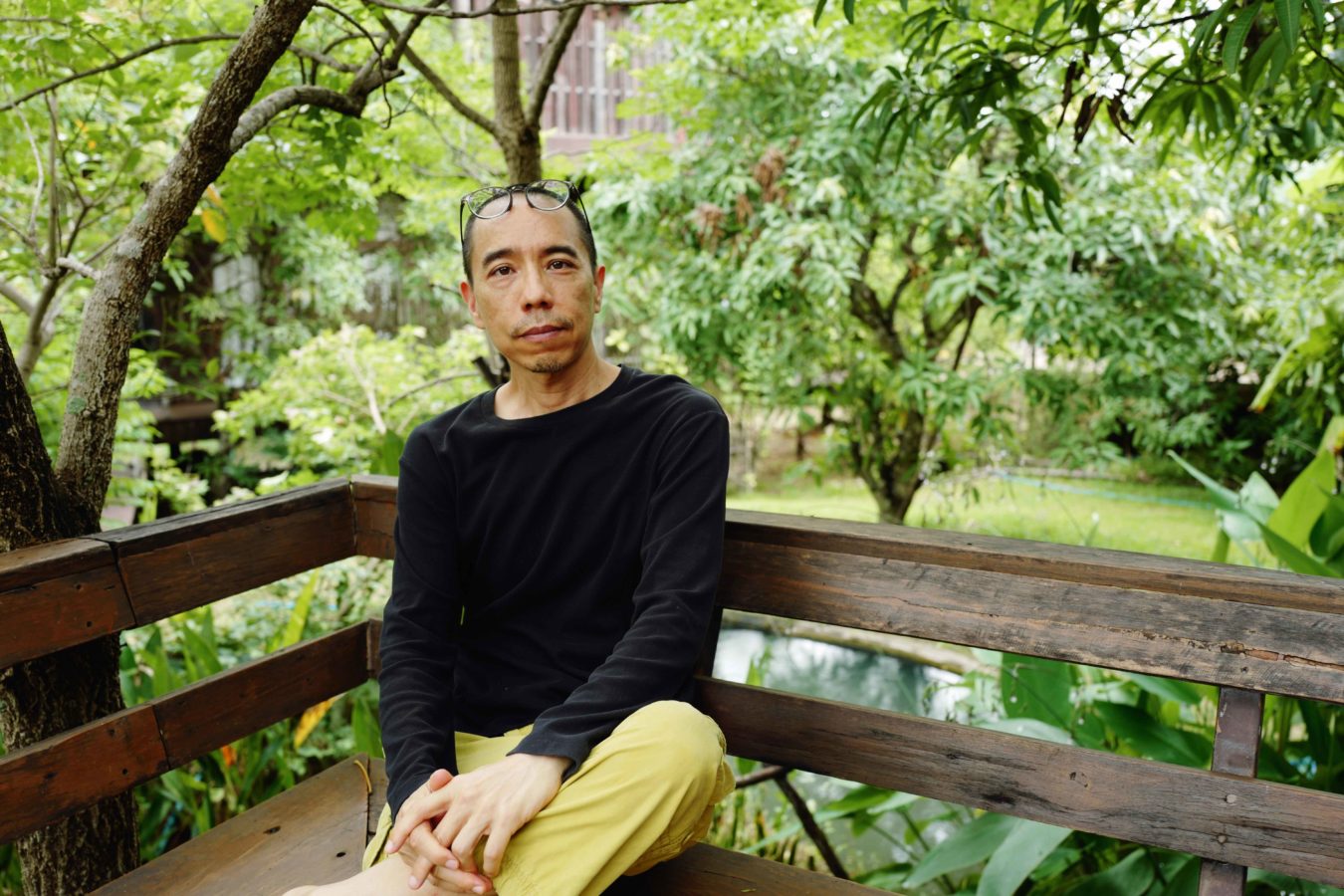 Thai filmmaker Apichatpong Weerasethakul is having a very busy summer. Not only has he just released his new film Memoria, which took home a Jury Prize at this year’s Cannes Film Festival, but he also has an upcoming art installation at Bangkok’s 100 Tonson Foundation.

When his film Uncle Boonmee Who Can Recall His Past Lives received the Palme d’​Or at the 2010 Cannes Film Festival, Thai filmmaker Apichatpong Weerasethakul became the first Southeast Asian director ever to win this top award. Of course, he had already shown several times at Cannes – starting in 2002 with Blissfully Yours (which won the ‘Un Certain Regard’ prize that year) – however, his 2010 victory catapulted the soft-spoken director to new heights of stardom on the international art house cinema circuit.

For Oscar-winning actress and noted cinephile Tilda Swinton, a long-time admirer of Apichatpong’s work, Uncle Boonmee ranks as one of her all-time favourite films. On the British Film Institute (BFI) website she describes it as, “Slow cinema at its most immersive, lateral and resonant. It’s possible to believe you dreamed Apichatpong’s films after you see them… they certainly take you somewhere you’ve never been before on this Earth.”

Now, more than a decade since the release of that landmark film, the acclaimed British-born film star has the lead role in the enigmatic director’s latest movie, entitled Memoria, which had its world premiere on July 15 at this year’s Cannes Film Festival (coincidentally the eve of director Apichatpong’s 51st birthday).

In the film Tilda plays Jessica Holland, a Scottish orchid farmer in Columbia who finds herself unable to sleep after being startled at daybreak by a loud and inexplicable ‘bang’ only she can hear (this idea, incidentally, stems from an experience the director had during his own first visit to Columbia). Jessica later befriends an archaeologist studying some newly unearthed human remains, and becomes fixated on a 6,000-year-old skull with a hole drilled into it – in order to “release bad spirits” the archaeologist tells her. Together, the pair visit the excavation site, and then in a small town nearby Jessica encounters a man by the river with whom she begins to share memories.

In retrospect, it seems almost cosmically inevitable that Tilda and Apichatpong would one day collaborate on a film. When I spoke with the director himself, shortly before the whirlwind of this year’s Cannes festival began, he discussed how he and Tilda have become friends over the years, and how they’ve been always searching for the right project to work on. In fact, he wrote the script for Memoria specifically with her in mind.

“It’s not a typical work for her,” Apichatpong says. “That’s why it took time for us to find the right moment, so that she could be totally committed, for a long stretch of time. It’s quite unusual.”

Also unusual is the fact that this is the director’s first film not set in his native Thailand, and not spoken in Thai (the dialogue is a mix of English and Spanish). It seems like quite a daring artistic leap to take all in one fell swoop.

“I know,” he chuckles, “but that’s the beauty. I think that I should have done this a long time ago. With my own team in Thailand we’ve been working together for almost 20 years. So to suddenly shift and go somewhere else with a new team is a bit scary, but it definitely opened up the senses.”

So does this combination of star power and a primarily English script hint that Memoria might be a step in a more commercial direction?

“I have no idea!” he says gleefully. “That’s why I’m excited about Cannes, to find out, because I can never judge my movies, really. But I would not say it’s commercial. That’s why we need so many partners, to contribute little by little,” he adds, listing the countries of production as Colombia, Thailand, UK, Mexico, France, Germany and Qatar, while the movie itself is a Kick the Machine Films and Burning production, in association with Illuminations Films (Past Lives). As for critical reception, the film went on to win a Jury Prize at Cannes – one of the festival’s top honours.

“Memoria is about the vibration of memories that connect us,” the director said during his acceptance speech, in which he also thanked Tilda for her grace, her humour, and her heart. “We talked many times about this dream,” he spoke to her from the stage, “and here we are. Our ship has landed and is ready to sail.”

In addition to Memoria, Apichatpong was also part of another Cannes 2021 premiere, having contributed a segment to the anthology film The Year of the Everlasting Storm, alongside such renowned international directors as Jafar Panahi, Anthony Chen, Laura Poitras, and Malik Vitthal.

“I contributed a short film to this omnibus project. All the films reflect, you know, the situation we’re in… the pandemic. It was made last year actually, when the situation was quite intense. In my case I just shot [it in] my bedroom.”

After Cannes wraps up, Apichatpong is scheduled to return to Bangkok and during the first half of August he’ll be putting the finishing touches on his art installation ‘A Minor History’, which is set to open on August 19 at the 100 Tonson Foundation art space, and will run until January 2022. To some it may seem curious that with all his success in cinema he’s still interested in smaller-scale art exhibitions, but he doesn’t see the two disciplines as mutually exclusive.

“They feed on each other,” he explains. “But, of course, making a movie involves a lot of people and financing, so art installations allow me more freedom to experiment.” This seems to me an interesting and slightly amusing statement coming from someone whose feature films are most often described as bewildering, inscrutable and hallucinatory, with a marked preference for unconventional narrative structures.

For his exhibit at 100 Tonson, which combines photography and three video channels, Apichatpong relates how he returned to Thailand’s rural Isaan region, the setting for many of his previous films, for inspiration.

“After the lockdown [last summer] I travelled to the northeast, where I grew up, to see and be inspired by the landscape and the people there. It started from just having no direction at all. I spent a month and a half on the road, mainly along the edge of the Mekong River, passing through my hometown of Khon Kaen, as well as Nong Khai, Nakhon Phanom and Ubon Ratchathani,” he says, adding that the stories he unearthed in the region were mostly about situations that were quite oppressive.

“In Kalasin, I discovered the ruins of an old cinema that reminded me of those big cinemas I grew up with, so I kind of juxtaposed these ruins – like the skeleton of a dead animal – with the current situation around there, most importantly the disappearance of people,” he says solemnly, alluding to the incident in January 2019 when the bodies of two high-profile Thai political activists, who had fled to Laos seeking sanctuary, were discovered in the Mekong River; very much the victims of foul play.

In its entirety, ‘A Minor History’ will consist of two halves, changing content midway through its scheduled six-month run. In it the artist creates a kind of “poem” that drifts between reality and dream; combining a style of dubbed movies and radio dramas that reflect on the remnants of memories and beliefs, and how storytelling – the traditional type as well as modern propaganda – shapes both personal identity and our society. Helping with the show’s evolving concept is Manuporn “Air” Luengaram, a well-known Thai curator with whom the director has worked closely in the past.

“The first part is mainly a kind of reminiscing,” Apichatpong remarks. “A fictionalised story about a person strolling along the Mekong and talking about the floating corpse, and how the Naga [the mythical river serpent] accidentally swallows the corpse and then has to throw up.”

Such pointed political jabs seem destined to stir up controversy, but the director is well-known for ruffling feathers in his homeland. For the Thailand release of his internationally acclaimed 2006 feature film Syndromes and a Century, which had its premiere at the Venice Film Festival that year, the Thai Censorship Board demanded the removal of four scenes (a request the director denied, although he later agreed to a limited release where the cut scenes were replaced by a black screen). As for his award-winning 2015 film Cemetery of Splendour, he never gave it a theatrical release in Thailand for fear that it would also be censored (although it has been screened privately at special film events).

The same fate is unlikely to befall Memoria, given its international cast and lack of Thai taboos being flaunted, although because of ongoing Covid concerns no hometown release dates have so far been scheduled. As for the future, the director reveals a small glimpse of what he’s working on.

“It’s another strange project, combining film and performance, but I cannot tell you much about it yet,” he says, although he indicates it will be influenced by the ongoing pandemic, while also touching upon his continuing interest in exploring the theme of sleep.

“At the same time I’m developing local works where I really want to focus on the political situation in Thailand,” he continues. “We are living in a very ‘crossroads’ moment. The new generation has a totally different attitude from my generation. There’s been such a shift in the past 10 to 20 years in this country.”

And while he’s probably too humble to say it outright, outspoken artists such as Apichatpong have played a major role in keeping the spirit and momentum of that shift alive.

This story was first published in the August 2021 issue of Prestige Thailand.