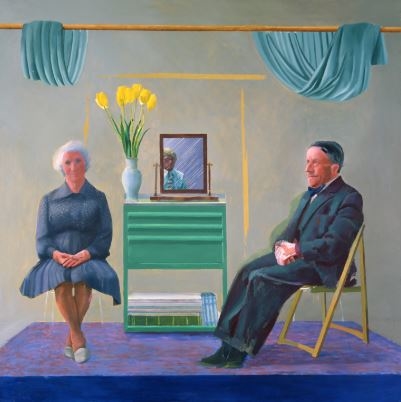 For the first time since its creation, David Hockney’s unfinished family portrait ‘My Parents and Myself’ will be going on display at the National Portrait Gallery in London. The retrospective “David Hockney: Drawings From Life” will notably feature 150 works by the British artist, marking the first presentation devoted to his drawings in over 20 years. Drawings of some of Hockney’s favourite sitters will be on view at the National Portrait Gallery, alongside self-portraits dating from his schoolboy days in the 1950s.

Among them is a rarely-seen portrait of Hockney’s parents, Kenneth and Laura, that the artist left unfinished in his Los Angeles home during 45 years. The canvas, started when he was living in Paris in 1975, depicts Hockney’s face reflected in the dressing table mirror between his father and mother.

Hockney’s sister, Margaret, recently opened up to the Guardian about the genesis of “My Parents and Myself,” revealing that her brother’s decision to abandon the project caused a brief rift with his parents.

“They would be a difficult subject matter, I’m sure. So I wasn’t surprised when Mum told me in August 1976 that David had called to say he’d decided to abandon his portrait of them. Mum was naturally upset but had to respect David’s decision,” she explained, adding that their father was more aggravated.

Although Hockney made peace with his relatives shortly after, the artist decided to start a new version of the portrait, titled “My Parents,” in 1977.

In that painting, Hockney notably depicted his father leaning over to read Aaron Scharf’s 1968 book “Art and Photography,” while his mother poses gracefully in a chair. “My Parents” currently belongs to the private collection of Tate museum, after being acquired from the now-shuttered Knoedler Gallery in 1981. The revised version of the portrait will not be included in the National Portrait Gallery’s upcoming exhibition, which will run from February 27 through June 28 in London.

Sign up to get the latest luxury and lifestyle news delivered to your inbox.
art exhibition Art & Culture David Hockney
AFP Relaxnews
art and culture


Error: API requests are being delayed. New posts will not be retrieved for at least 5 minutes.