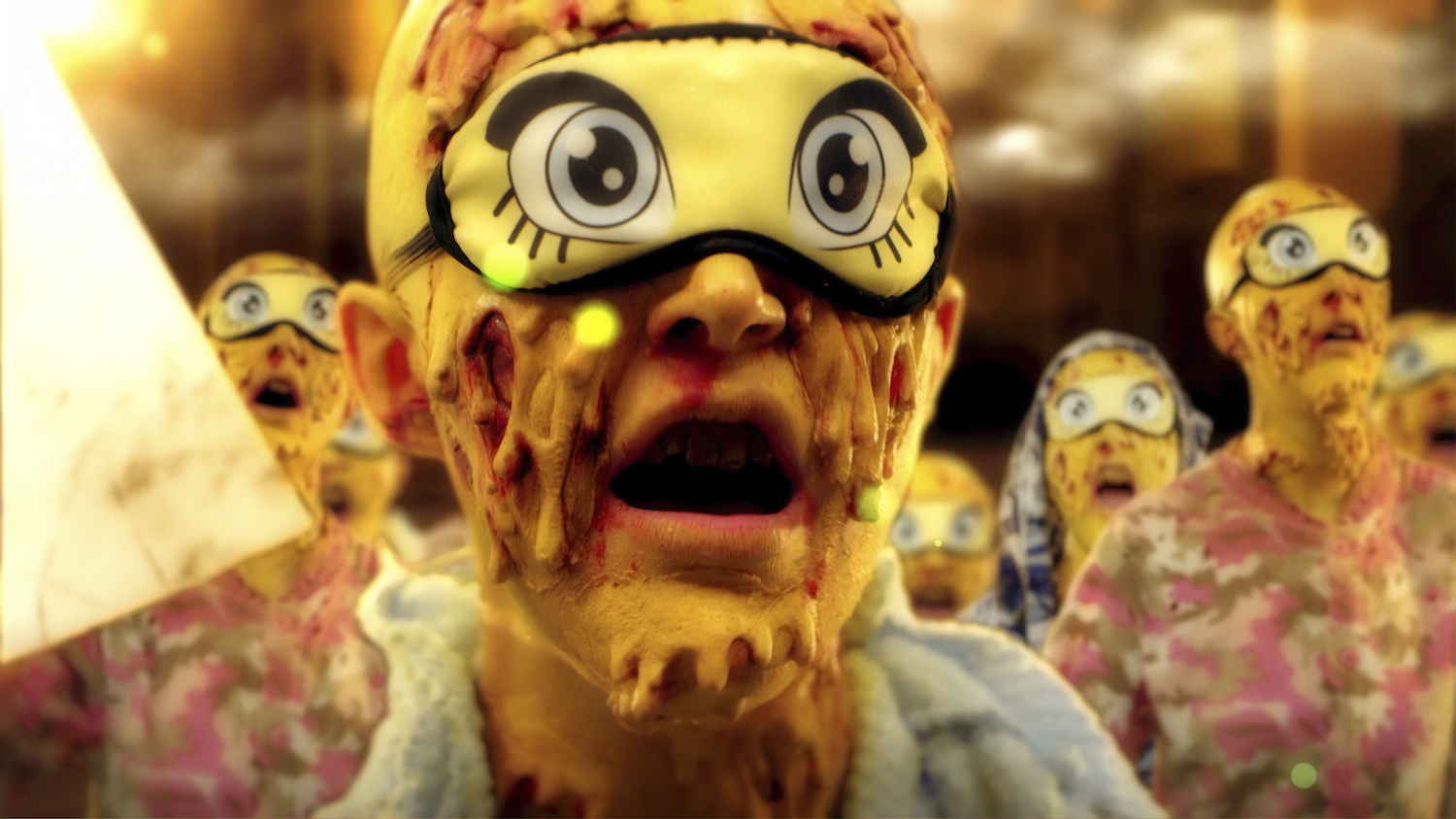 In this ongoing series, Prestige profiles some of the famed, international female artists who will have their work displayed at BAB 2020. Here, we take a look at the striking video and digital print installations by Rachel Maclean.

Known for both creating and starring in elaborate films that incorporate wild costumes, over-the-top make-up, green-screen VFX and electronic soundtracks, Scotland-native Rachel Maclean has been exhibited widely in the UK and internationally. Her participation in BAB 2020 marks her first foray into Southeast Asia, where her video and digital print installation is on view now at the BACC.

Tell us about your Bangkok Art Biennale exhibit, and the rather prescient themes it explores.

I will be showing my film It’s What’s Inside That Counts, which is set in a dystopian metropolis fuelled by fevered connectivity. A race of rodents beneath the decaying streets hack the sales messages of a Kardashian-type demigod; more cyborg than human, a successor to Fritz Lang’s Maria [from the 1927 film Metropolis], a Maschinenmensch to rule over the digimash-fed masses. Part Baroque heaven, part postapocalyptic nightmare, the grotesque, cartoonish figures are seen to share in and compete for attention within a forever connected, corrupt, caffeine marinated environment where power dynamics are repeatedly inverted and reconfigured.

Will you be in Thailand at any point during the biennale’s 3-month run?

Unfortunately, because of Covid-19 restrictions, I won’t be able to make it. Which I am very disappointed about. However, I hope there will be the opportunity to connect digitally with the festival. I have never been to Bangkok nor shown in SE Asia before, so it’s really exciting to be showcasing my work at the Biennale. I am so excited to be part of it, and to be exhibiting alongside such an accomplished selection of artists. It’s such a shame not to be able to be there in person, but I’m really looking forward to new audiences seeing my work! Did the pandemic period affect in any way your BAB 2020 contribution?

It’s What’s Inside That Counts was made in 2016, so it doesn’t respond directly to the pandemic. However, there are many themes in it that are relevant to the current moment. In particular, the piece comments on how existing social inequalities have been highlighted and intensified by Covid. In the film, you see a mass of emoji inspired plague victims, that protest in a desert, demanding “data”. Their demands go unanswered and eventually they collapse into the sand with exhaustion. Meanwhile, you see a cyborg celebrity figure, living luxuriously in a gated mansion. She’s had her nose removed so she doesn’t need to breath in the diseased air expelled by her adoring fans. Does your gender identity play a major role in your art, or do you prefer it to be an issue that doesn’t need to be addressed or discussed?

All my work is about, in one way or another, gender, and in particular female identity. The title of the work It’s What’s Inside That Counts, is meant to be ironic. Women are taught, from a very young age, that their external appearance will have a direct effect on their success, social standing and material wealth. What’s inside, in our world, counts for very little. However, women can’t admit to aspiring to beauty for these reasons. Instead women have to couch their desires for beauty in a rhetoric about “confidence” or “doing it for me, not for anyone else”. Consequently, I think women find themselves trapped, unable to acknowledge or freely articulate the rules that society has written for them, but nonetheless living within them. Something I explore in the film is the way that capitalist culture is constantly telling us that we have the power to make ourselves happy and that our problems can be solved on an individual level. We are told that our unhappiness is not the fault of the external world, it is the fault of our individual negative thinking. We just need to teach ourselves to think positively, and everything will be fine. For me this thinking is conveniently apolitical, in that it actively attempts to divert people from addressing the ways in which their experience is collective and part of a much broader socio-political problem. In this context, women are taught that instead of tackling the root of your problem – systemic misogyny – you should accept misogyny and find a way to be happy in yourself despite that.

The Bangkok Art Biennale 2020 runs until January 31, 2021. Find out more at bkkartbiennale.com.

Sign up to get the latest luxury and lifestyle news delivered to your inbox.
people art and culture Female Artists BAB 2020
Bruce Scott